Maybe it’s just the fact that I spend more time looking than I used to, but I feel as though the ED narrative has expanded a lot in the last few years; media is taking interest in the whole spectrum of EDs, rather than focusing exclusively on anorexia/bulimia (though we still have a long way to go), and first person voices and testimonials of recovery seem to be diversifying.

There’s greater awareness these days of the fact that disordered eating does not always show up as being clinically underweight/overweight. I hope this encourages more people to speak up about their struggles, rather than feeling as though they should ignore them or try to go it alone because they don’t fit into a diagnostic box.

One of the articles I’m sharing today makes open acknowledgment of the fact that eating disorders, which have long been “widely viewed ‘as a white girl vanity issue,'” in the author’s words, are gaining recognition as complex mental illnesses. It discusses how the tech industry may be a surprising and invaluable ally in changing public awareness/perception and offering more tools to support those who are suffering.

Gillian Harvey’s humble and candid essay in The Guardian also tackles the reality of EDs as mental illnesses. Harvey writes,

For women like me, the perception that anorexia is a disease of the young and is linked to narcissism is damaging. It’s embarrassing to admit, when teetering on the brink of your fourth decade, that you’ve just gorged on chocolate and found yourself hunched over the toilet bowl. But it shouldn’t be. Eating disorders are a mental illness.

I’m not sure whether Harvey and I feel similarly about the promise of a full recovery, but I agree with her observation that EDs can flare up repeatedly over the course of a lifetime, which makes the work of guarding one’s recovery through continual mindfulness all the more important.

In the last year or so, I’ve come to understand that anorexia was, for better or for worse, my primary coping mechanism for a really long time. Staying in recovery means resisting the urge to summon up a set of behaviors that made me feel safe, protected, and empowered. I’ve learned how to critically examine and resist the ED tendencies, but the process of developing a toolkit to cope with pain or powerlessness is ongoing. In many ways, life feels much lonelier than it did when I had the disorder to keep me company. Even now, this comes as a surprise; it’s one of those realities of life-after-recovery that no one can really prepare you for.

I was often told during recovery that the process was like letting go of an abusive lover—sometimes he was given the name of “Ed.” For me, the process felt more like parting ways with my best friend—a tender confidant who had shepherded me through hard times. It has been many years since my physical recovery, and I still find myself longing for her company sometimes. My personal NEDA week observance this year has been to understand that recovery isn’t simply a process of doing battle or dancing on one’s demons; it can also be a painful and poignant rupture, the pangs of which can be felt for many years after.

I’ve never been farther away from my ED in my habits, never more certain that I won’t go back to tedious cycles of restriction and obsession. But the last year in particular has made me yearn for the feelings of certainty and structure that the disorder gave me. That I know how deceptive those feelings were makes it easy to resist engaging with them again, but it doesn’t necessarily soften the blow of living without them.

That’s recovery, in all of its mess and incongruities. I’d never trade the rich world I inhabit today for the narrow and rigid one left behind. But I miss it sometimes. Lately, I miss it a lot of the time. I take heart in reminding myself that recovery—at least as I have experienced it—is a practice, not a neat story of before-and-after. It’s a process that I give myself to with attention and faith every single day. This week, more than in other weeks, I’m lifted up and supported by the many voices of others who have found their way through it.

And of course, one of the major joys of recovery is to live in peace and celebration with food! On that note, let’s move on to some links. 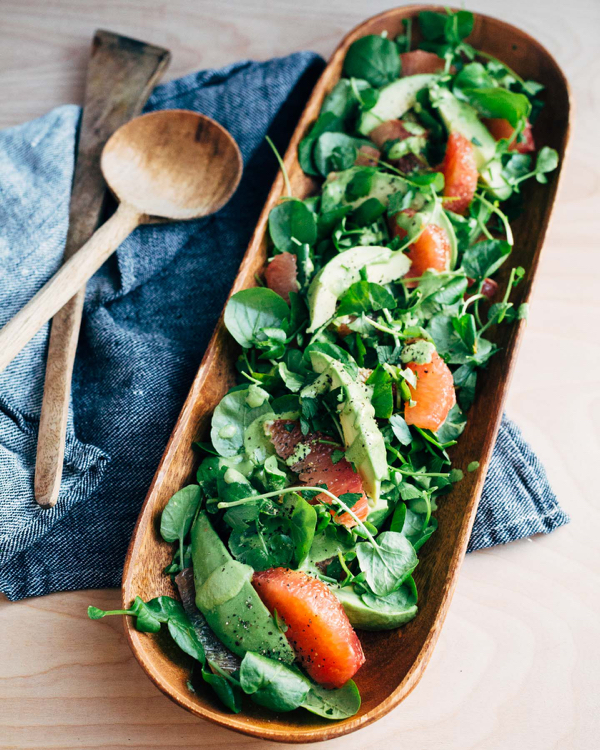 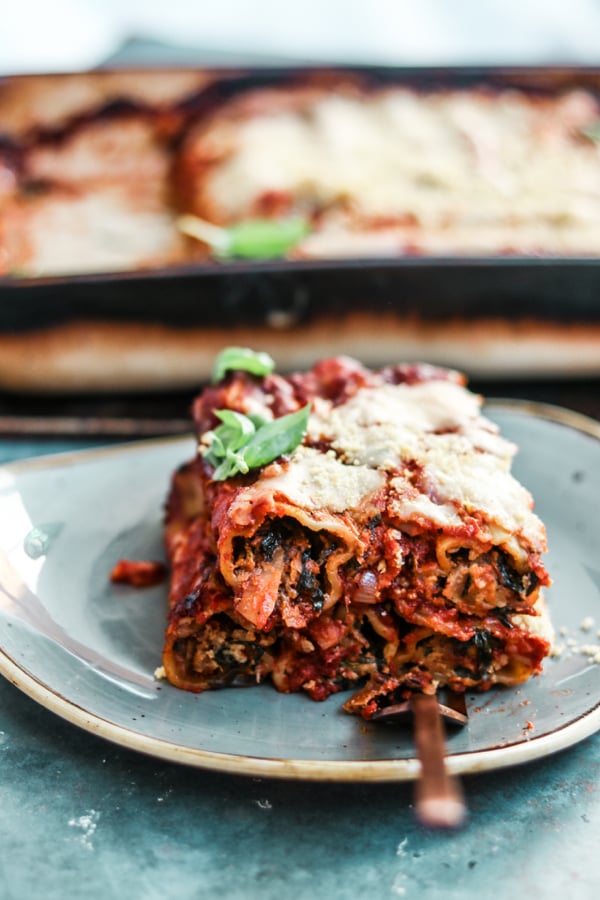 Sam’s vegan spinach, cashew ricotta, and “ham” cannelloni is vegan comfort food at its finest. I love the idea of a coconut ham recipe. 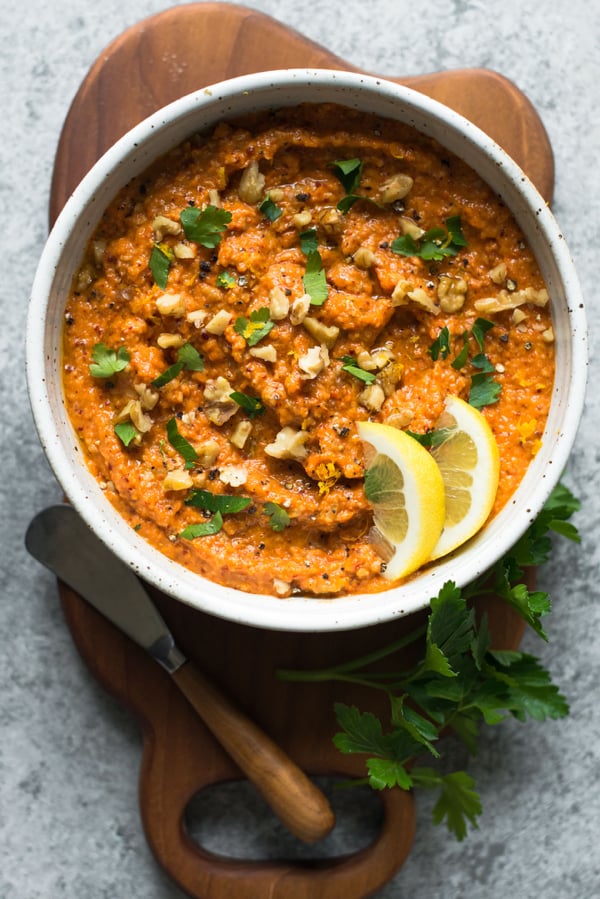 Muhammara is one of my favorite dips, and I can’t wait to try Lisa’s version, which incorporates a drizzle of pomegranate molasses (I’ve got a bottle sitting in my pantry that could use a little love). 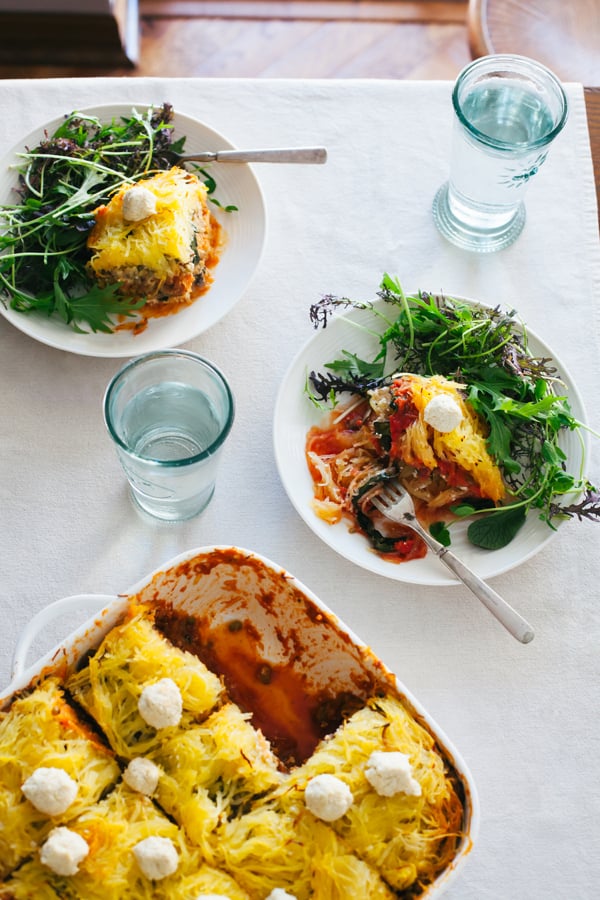 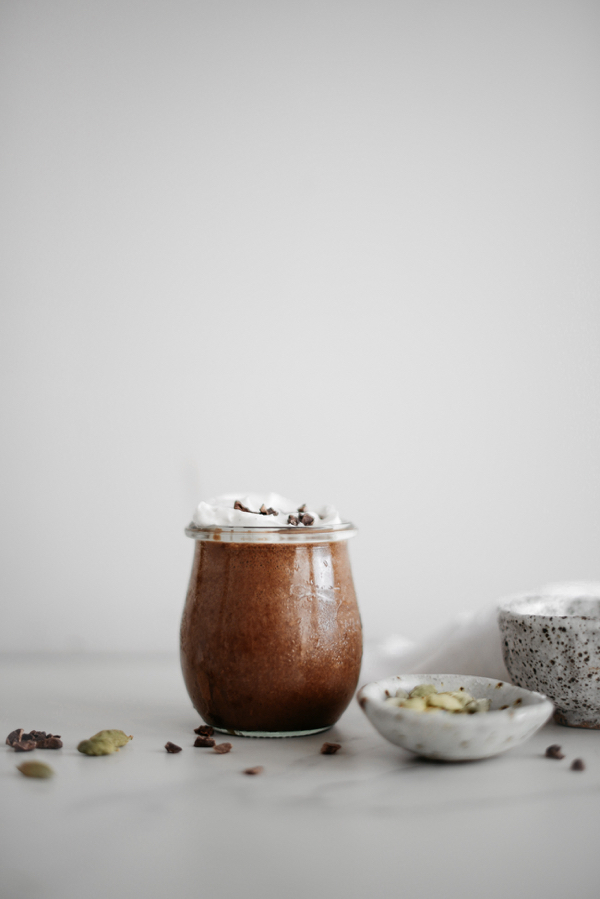 Finally, something sweet. Thalia’s vegan chocolate mousse is made with aquafaba, melted dark chocolate, and coconut milk for plenty of thick, smooth decadence, and then it’s topped with a layer of cardamom cream. What a wonderful dessert!

1. Fast Company reports on how eating disorders are getting the “silicon valley treatment.” It’ll be interesting to see how the use of apps and other tech platforms might impact these mental illnesses (and mental health in general).

2. One of the more difficult parts of my recovery—another one of those uphill battles that I didn’t anticipate—was that my readiness to embrace a new relationship with food preceded any real advances in making peace with my body. As I was learning to respect and even celebrate my own cravings, I had to fight off the continuing discomfort of body dysmorphia (especially as my body started to change). This article provides some good tips on how to make peace with food even as body discomfort persists.

Growth comes in bits and pieces. Sometimes it doesn’t feel cohesive or progressive, but it’s important to celebrate each small victory or gain in freedom anyway. The process begins wherever it can, and if it begins with food—no matter what else remains to be healed—well, that’s pretty great.

3. Binge eating disorder (BED) is now the most common ED in the United States. In spite of this fact, it remains poorly understood and often shrouded in misconception. Julie Friedman, a research scientist at the front lines of working to better understand BED, explains some of the common myths surrounding this type of eating disorder.

4. Carrie Arnold (@edbites on Twitter) has a lot of smart, heartfelt things to say about EDs and ED treatment. Her latest article for STAT News touches on all of the issues I’ve mentioned in this post, starting with the importance of recognizing eating disorders as illnesses, rather than a form of willful behavior. She writes,

Treating a disease that involves self-starvation seems relatively straightforward. “Just eat” seems to be the obvious solution. If only it were that simple. Just as someone with schizophrenia can’t will themselves out of psychosis and a person with bipolar disorder can’t wave a wand to eliminate mania, those with anorexia can’t just eat. Malnutrition accompanies eating disorders, which has been shown to shrink the brain and affect cognitive function, potentially interfering with a person’s ability to see the necessity of treatment. Many with anorexia also don’t find the weight loss alarming or disconcerting. As my illness tightened its grip and my weight dropped, I didn’t find the prospect of dying nearly as terrifying as the thought of having to face a plate of food five times a day. I wanted to get well, just as long as it didn’t involve eating or gaining weight.

Arnold and I had different experiences of anorexia and recovery, but I can certainly remember the denial and fear she references. I see time and time again how casually people assume that the disease can be consciously overcome—without the expert care and support we assume are necessary for other types of illnesses.

Arnold’s life was saved by forced tube feeding, but her thoughts about the value of this type of intervention are anything but simple. Instead, she weighs the procedure with thoughtfulness and nuance, and her considerations are worth reading.

5. Finally, Gillian Harvey’s bracingly honest thoughts on her ongoing struggle with disordered eating, along with a personal plea for us to fight back against stigma and stereotyping.

These aren’t easy reads, but I think there’s comfort in bearing witness to honest and brave reflections. These remembrances aren’t neat or sanitized or simplified, but they’re truthful, and I admire the courage it must have taken to write them.

That’s it for today, and for NEDA week. I’ll be back to business this week with some new food to savor.

I used to write about digestion all the time on this blog, but it’s been a while since the topic came up. It’s not that my interest in GI health has waned—it hasn’t—but it’s become more of a professional focus and less of a personal one, mostly because my own struggles with IBS have receded over the years. Why? Hard to say, but I suspect that consistent eating patterns (as opposed to the extremes of my eating disorder years), plenty of soluble fiber,…