A big thank you to everyone who kindly read and commented on Steven’s post on Thursday! In case you missed the post, my boyfriend said a few words about his fear of coming across as a “difficult” customer, now that he’s eating vegan with me in restaurants. The topic really seemed to resonate, and I encourage you to continue commenting and asking questions (a few readers have asked me to say more in the future about ordering off the menu, which I’ll try to do).

And now, I’m catching up on work and feeling inspired by this roundup of recipes and reads. 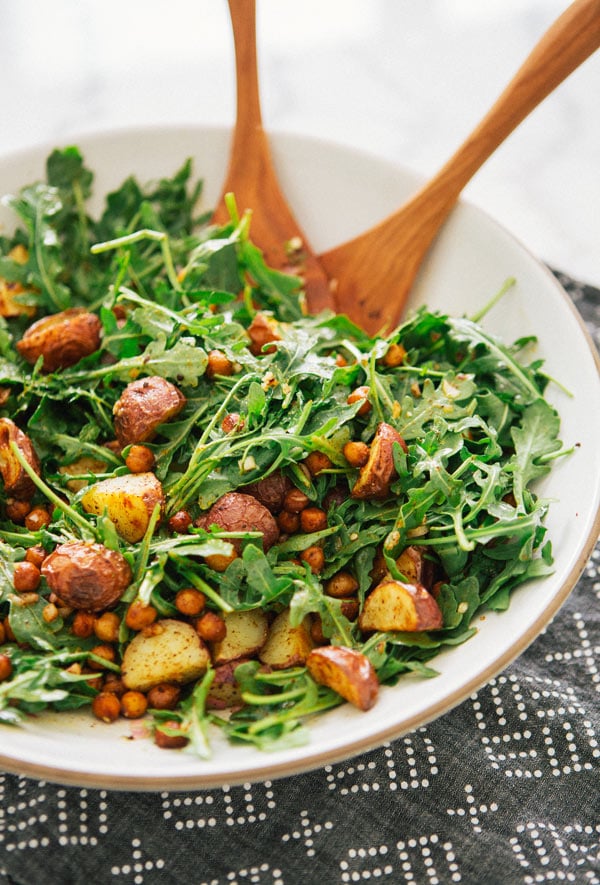 Lots of vegetable splendor in this weekend reading, starting with Sarah Yates’ beautiful roasted potato and paprika chickpea salad. What can beat the potato + paprika combination, I ask you? 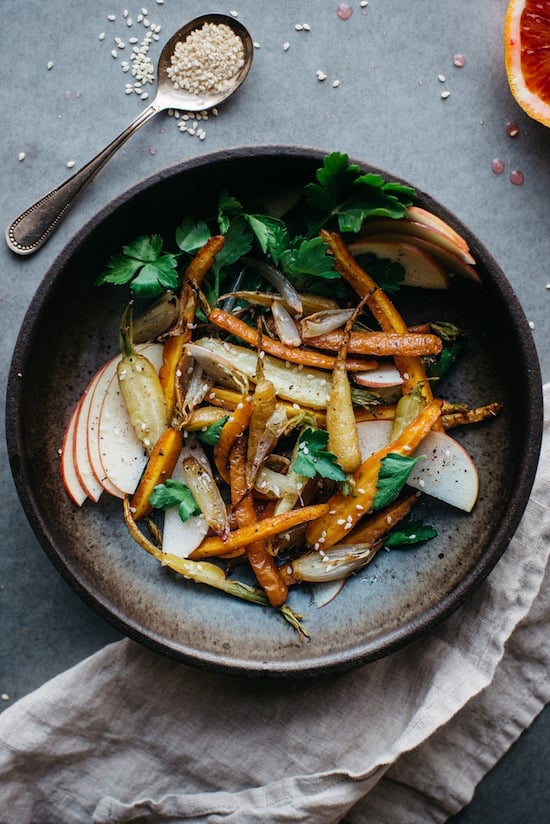 It was posted a few months ago, but I’m loving Lindsey’s fennel-roasted carrot and shallot salad with shaved apples. Pretty enough to be a restaurant appetizer, but homey and rustic, too. 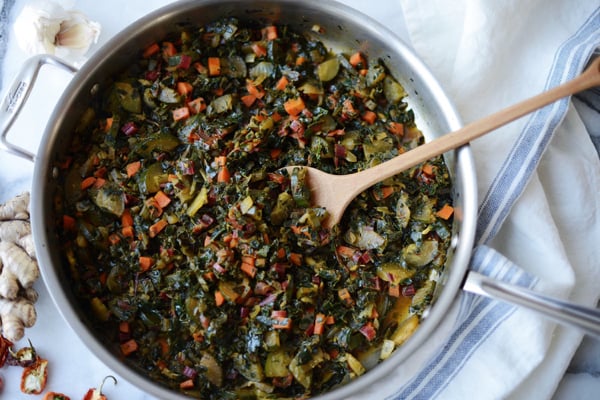 These spicy stewed greens from Fare Isle look divine; perfect to pear with basmati rice, polenta, or even toast. 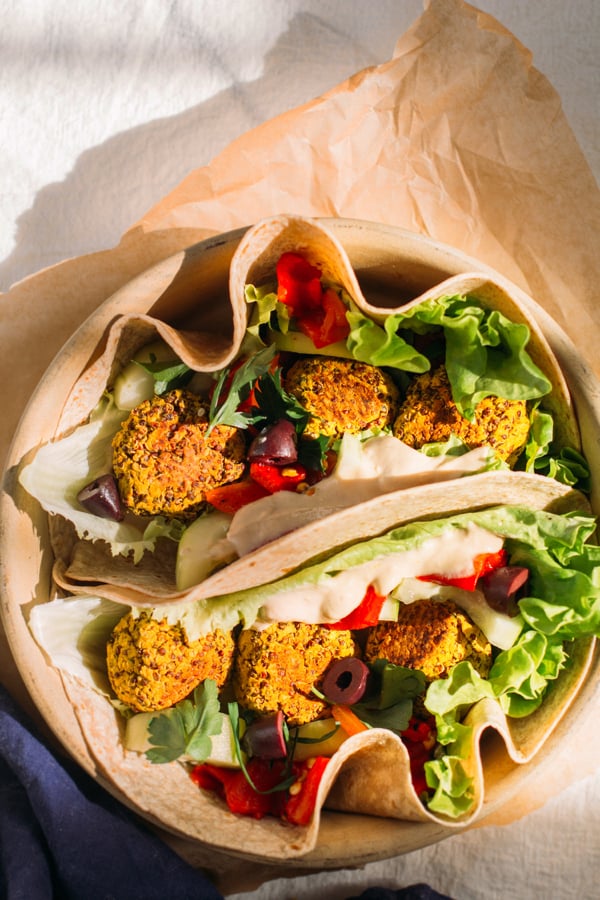 I’ve tried making quinoa falafel in the past, but the texture has always been a bit of a challenge (since quinoa is such a small and un-sticky grain). Looks as though Amy of Sobremesa nailed it with these herby quinoa falafel with tahini lemon sauce. 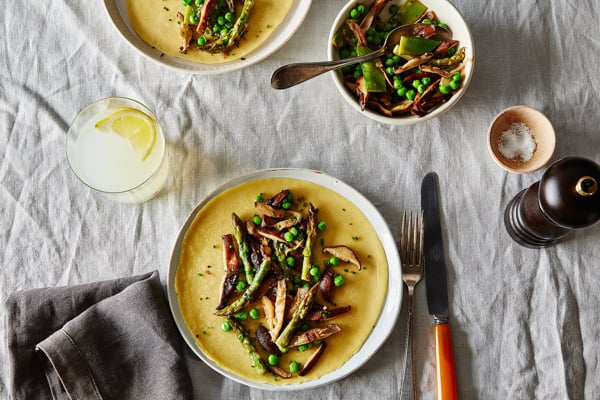 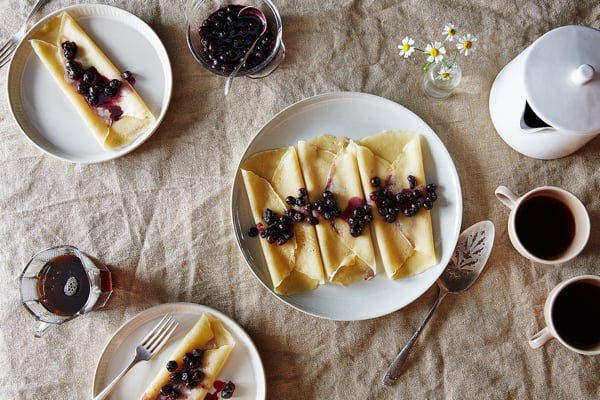 Finally, my New Veganism column this week features delicate-yet-sturdy, sweet-or-savory vegan crepes. They are awesome, and I encourage you to check them out!

1. A cool article from Dan Buettner (author of The Blue Zones) on Okinawan women and their diets. Okinawans have famously long lifespans, on average, and Buettner is exploring whether or not the foods they eat may hold some of the secrets to their incredibly longevity. Traditionally, dietary superstars for Okinawan women include a rich amount of carbohydrates (about 80% of their diet), especially sweet potatoes and rice, soy foods, and seaweed. Fish, meat (usually pork that had had most of its fat skimmed off), and poultry constituted about 2% of their overall diet.

Buettner makes clear that, since the arrival of fast food, Okinawans’ rates of lung, breast, and colon cancer have almost doubled, but the study of their diets in 1949–before Western influences had taken hold–is really interesting.

2. Speaking of soy foods, a fantastic article from Ginny Messina in Today’s Dietitian on tofu and its many uses.

3. There’s a lot of debate about what the “right” or the healthiest amount of exercise is. I’m not sure that this is a question to which we’ll ever get definitive answers, but Gretchen Reynolds wrote an interesting article on the topic for The New York Times this week, highlighting findings from two recent, comprehensive studies in JAMA Internal Medicine. It seems that the “sweet spot” is more than a lot of people do, but less than many people think they have to do. And even a little exercise lowers risk of premature death by 20%.

4. Also in the New York Times, a deeply touching article by Frank Bruni. It is a tribute to Bruni’s father, and especially to the generosity of spirit that has allowed him to continue living and giving in the years since Bruni’s mother unexpectedly passed away. Bruni writes,

“He has figured out what makes him happiest, and it’s doing the little bit that he can to nudge the people he loves toward their own contentment…Here’s what happened, on this milestone birthday of his, when we finally found the right blackjack table and fanned out around him and it was time for his trick:

He asked each of us — his kids, our life mates — to stretch out a hand. And into every palm he pressed two crisp hundred-dollar bills, so that our initial bets would be on him and we would start out ahead of the game.

Finally, a fascinating article in Food and Wine on the science of how our palates mature over time, allowing us to embrace and develop a taste for foods we’d previously disliked.

I wish you a restful Sunday and a great start to the week ahead!

I don’t have many photos of myself. If you were to enter my apartment, you’d find a few framed pictures of my mom and one of me at age eight or nine, all pigtails and missing front teeth, smiling directly to the camera. I love the lack of inhibition in the photo, the sweet confidence. I hang onto the image as a reminder that as a child, I was unashamed of being seen. I came into life with this quality, and it’s always there, no matter…