I nearly broke into clapping (at home, alone) earlier this week when I read Amanda Cohen’s Women’s Health article on women and appetite.

In her essay, Cohen describes a scenario I think most women can relate to:

Over the years, I’ve watched hundreds of dinners from the pass, and I have a terrible confession to make: When I see two women sit down, my heart sinks a little, because of what I see happen so often. First, one of them says, “I’m starving, do you want to get this? And one of these?” then the second woman begins, “I’m not that hungry, but if you really want it. . .” Soon, three courses becomes a few appetizers, and a bottle of wine becomes a glass. I get it: We all want to look and feel good, but I see this so predictably that it feels pathological.

I see a lot of it, too. I’ll never forget being at a dinner long ago with a group of vegan eaters. At the time, I associated veganism strongly with newfound freedom and healing with food. So I was surprised when, after a multi-course meal, more than half of the women at the table started expressing remorse about how stuffed they were, how they’d need to go for long a run the following day, and started Googling juices bars for the morning after.

The meal had been wonderful. Of course I’d had my own little nagging nudges of guilt—should I have eaten every bite of every course? Did I really need to sample the two desserts that were brought out? But I’d also felt lucky to have eaten the food and proud of giving myself permission to bask in that sensation. I wasn’t actually stuffed—I was comfortably full—so to embrace a posture of having overdone it would have felt disingenuous, too, more socially programmed than truthful.

I knew it wasn’t my place to question anyone else’s experience that night: I couldn’t know what others were feeling, and if recovery has taught me anything, it’s to stop fixating on what other people are doing and to focus on my own needs. But it was challenging to stand by my feelings as the collective discussion of food guilt got louder.

In the years since, I’ve had this experience many times. The common denominator is how rarely I can actually relate to exclamations of fullness. When I’m at a dinner and everyone leaves the table declaring how stuffed they are, half the time I want to say, “really? That was delicious, but I could go home and eat a sandwich right now.”

Maybe that’s because I have a bigger appetite than most people, or maybe it’s because I’m not interested in pretending that my appetite is any smaller than it really is. As a kid, I was told repeatedly that I was a “bottomless pit”; at one point, when I was only eight, I was labeled at a family dinner table “the human trashcan.” I carried the sense that there was something wrong with me and my appetite and all of the shame that came along with it for so many years. Putting the burden down was a huge relief.

Maybe I do have an unusually robust appetite. If so, cool: it’s a feature of my body and biology, like any other. Maybe my appetite is enhanced by the fact that, at a very early age, I was instructed to deny it. No matter the case, years of watching the very scenario Cohen describes leads me to suspect that many women are in the same boat as me—hungrier than we’ve been socialized to say we are.

I know that there’s a flip side to all of this, which is that social situations and group dining can encourage a lot of us to eat more than we really want, because there’s a lot of food on the table or because we’re people pleasers and we have a hard time turning things down. That’s its own food-related challenge; I don’t want to make a broad assumption about what’s going on when people eat more than they initially expressed wanting.

The dominant emotion I sense at these meals is fear: fear of looking like we want too much, of being judged. From the time we’re kids, we girls are taught to be ashamed of our appetites—that they have to be controlled, that they’re dangerous, embarrassing. The result? We live in a world where 53 percent of women are at a healthy body size but still report that they’re trying to lose weight.

Cohen’s essay brought to mind this post, which has always been one of my personal favorites from the blog. When I read it now, I’m aware of the fact that I was much less at peace with my appetite when I wrote it than I thought I was. It doesn’t matter; for me, that post was a brave declaration of an intention to eat and enjoy it, and I’ve done my best to live by that intention in the eight years since.

I’m grateful to Cohen and other women who are doing what they can to normalize, celebrate, and speak up honestly about the experience of hunger, wanting, and getting appetites met. And while this dialog may resonate especially with women, I think it’s crucial not to confine it by gender. A few of the articles that I’m sharing today demonstrate that eating disorders and food shame affect all of us.

Here’s to celebrating food, appetite, and the great blessing of being able to feed ourselves when we’re hungry. I’m wishing you all a wonderful week ahead. 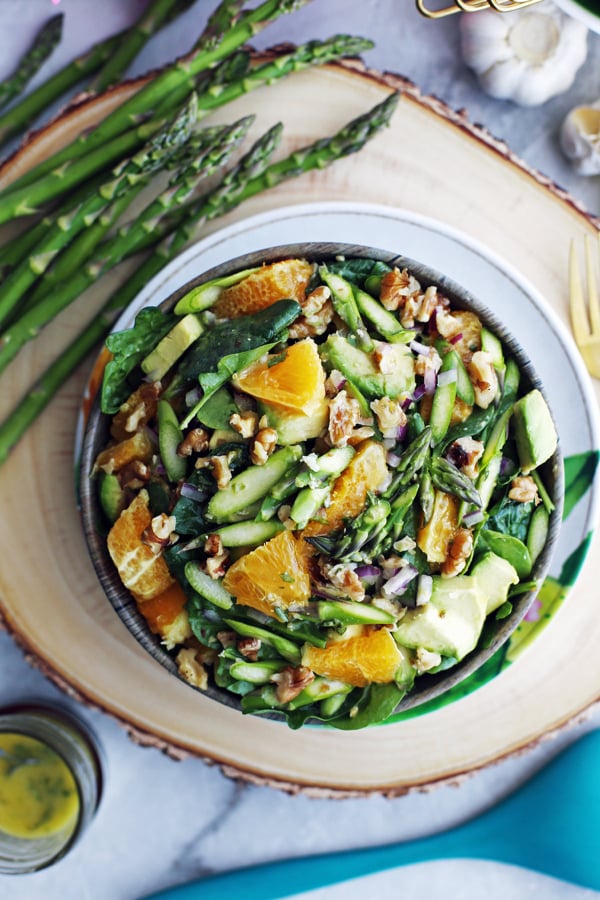 I was so excited to dive into my first meal-sized salad lunch in months yesterday, and it brought on a rush of spring salad fever. I love Marie’s colorful asparagus orange spinach salad with a bright lemon basil vinaigrette. 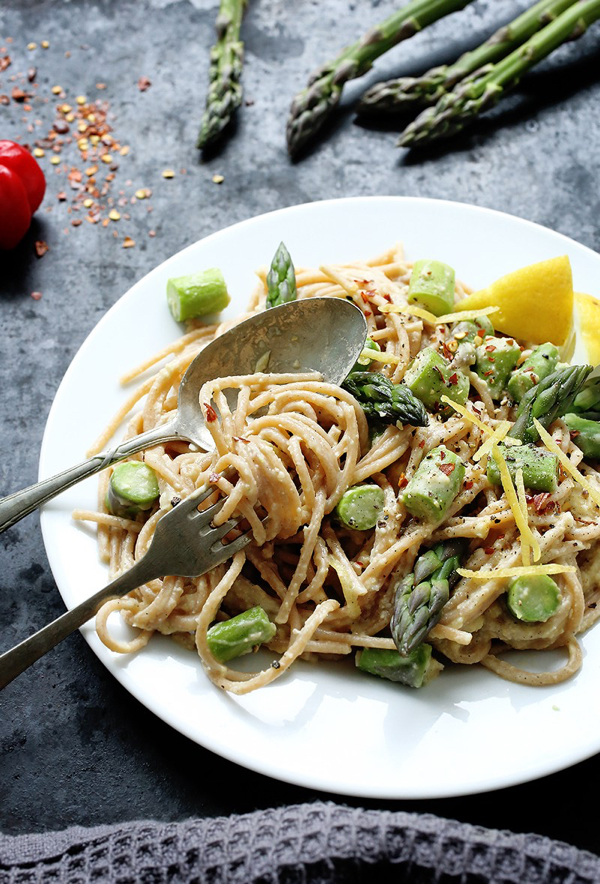 More asparagus! I have yet to try hummus as a pasta sauce, but I use it often as a quickie salad dressing, so I think I’ll dig it. Evi’s quick hummus pasta with asparagus is inspiring me. 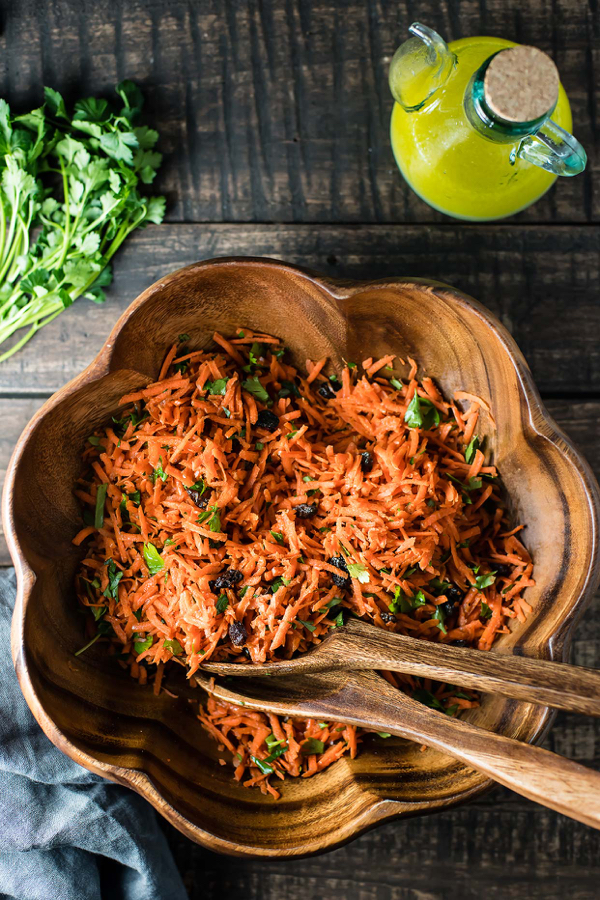 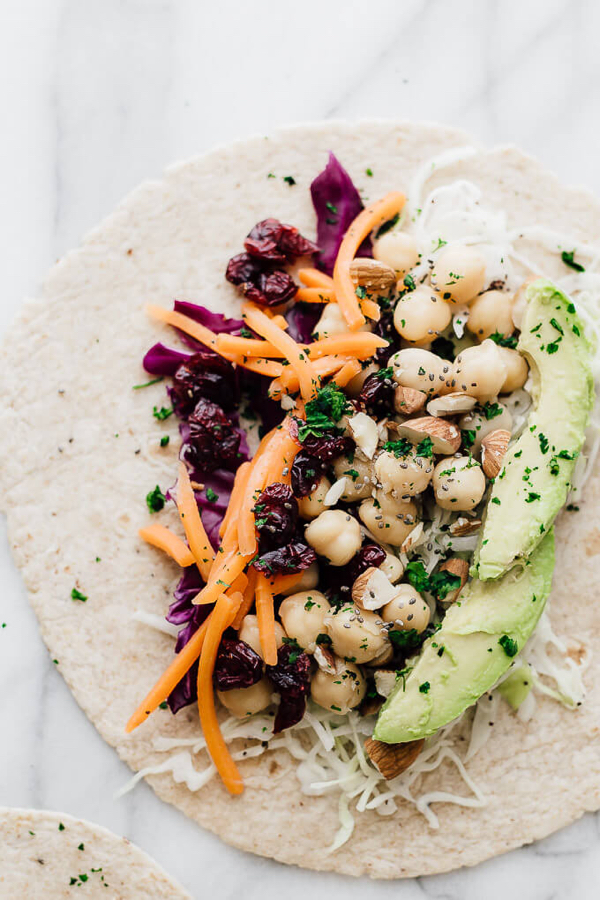 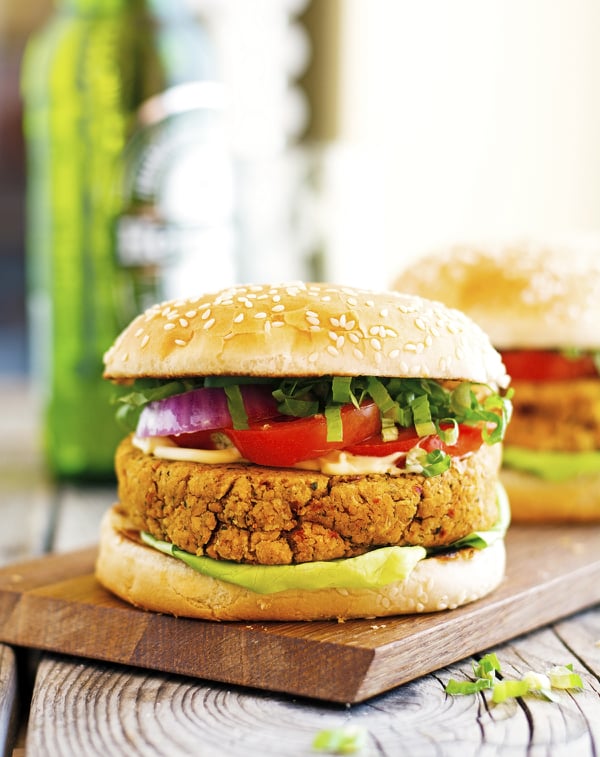 Finally, a little comfort food. Mike’s sun-dried tomato and chickpea burgers are hearty, healthy, and super simple to make. I love adding sun-dried tomatoes to food for umami, and I’m sure I’ll enjoy these.

1. Runner’s World reports on eating disorders among men. I was really interested to read that, because male runners don’t experience the classic “female athlete triad” (underweight, amenorrhea, osteopenia), symptoms of ED often slip under the radar.

2. Another important piece of reporting on this subject: Daniel Summers on the very high prevalence of EDs in the LGBTQ community.

3. From the Cup of Jo blog, 17 beautifully sensitive reader comments about grief.

4. Joanna’s blog also pointed me to this article about how older Japanese women are finding community in jails. As I read, I felt saddened that a sense of support and belonging wasn’t more readily available to the women elsewhere, yet sort of amazed at the strength of the human impulse to connect at all costs.

5. Finally, Amanda Cohen on loving food. Lots of it.

Happy Sunday, and love to you all.

On Tuesday morning, I graduated from Teacher’s College with a master’s of science in nutrition and education. It’s one of the final steps in my road to becoming an RDN (registered dietitian nutritionist). Regular readers know that this has been a long, long road for me. I took my first pre-requisite science classes while I was still working full time, in 2010. I wasn’t yet sure what route I’d take into healthcare; six months later, I had quit my job and become a…

Happy Sunday, folks. Thank you for all of the kind words and feedback during NEDA week. It’s always a pleasure to write those posts and to hear your insights. This week will have a new and different theme: I’ll be completing the SNAP food challenge. This is an assignment for my Community Nutrition class, and the purpose is to shed some light on what it feels like to live with food insecurity. I spoke more about the challenge in this post, but the…

Happy Sunday, everyone. Hopefully this post finds you settling back into the swing of things after a busy holiday weekend, and if you’re traveling today, I hope those travels are safe and speedy. The two weeks before Thanksgiving were so hectic that I haven’t had much time to soak in the start of the holiday season, but I can feel the excitement growing. For me, getting excited about the holidays always means getting excited about holiday cooking, holiday food gifting, and celebratory recipes. I’m excited to…