Happy Sunday, everyone. In spite of the arrival of April on Friday, it’s suddenly very cold and windy here, which makes me glad that I had the instinct to whip up a big pot of soup this weekend.

I’ve spent this early morning doing some reading for my Food, Nutrition, and Behavior class; we’ve transitioned in our coursework from what might be called more biological studies (appetite, cravings, nutrient acquisition) to a more anthropological focus. Right now we’re reading Sydney Mintz’s fascinating book, Sweetness and Power, which examines the rise of the sugar industry (and the slave trade that made it possible) on history. It’s really engrossing, in spite of a scholarly tone and sometimes dark subject matter.

And in between chapters, here are the recipes and articles that I’ve been exploring. 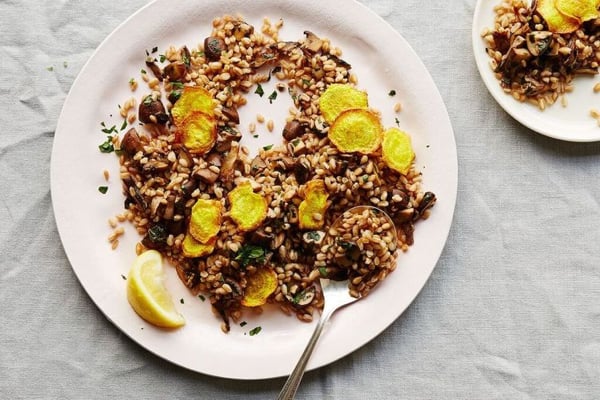 This warm farro salad with mushrooms and crispy beets is a perfect transitional recipe for this time of year, when there’s still a craving for earthy winter foods but we’re eager for some touches of brightness, too. I love the simplicity of the recipe, and the butter–which is listed as optional–could be easily replaced with Earth Balance.

Kathleen’s spring vegetable wonton soup is so pretty, and I’m impressed by the technique and confidence that go into making the homemade wontons! It’s a skill I’ve never really mastered, but this recipe is inspiration to try again. I love the color that asparagus and peas add to the dish. 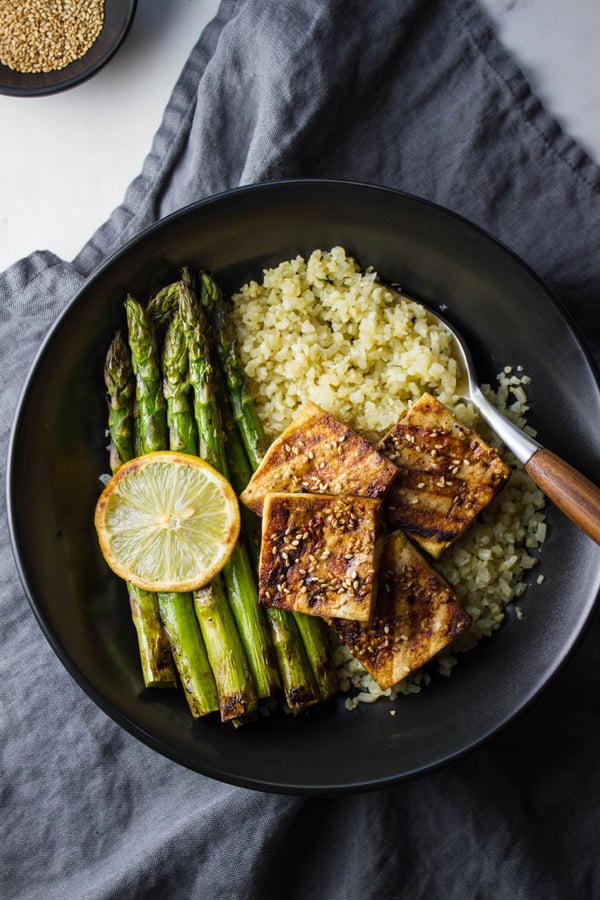 A trio of grilled tofu, asparagus, and gingered cauliflower rice make for a beautiful, easy springtime meal. I might be tempted to swap brown rice or quinoa for the cauliflower rice for a little more staying power, but I love the simplicity of Julie’s preparation. 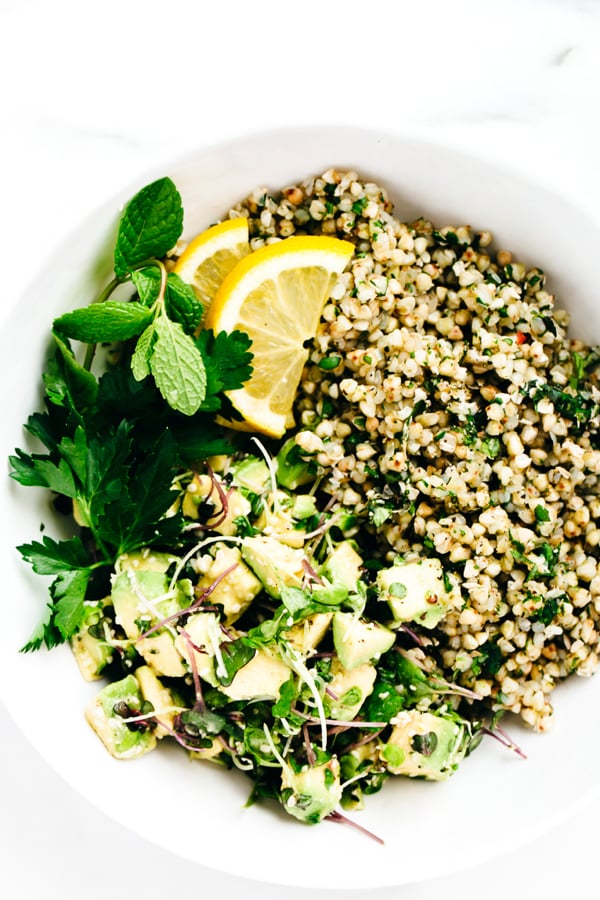 Plus, you can never go wrong with a chopped avocado… 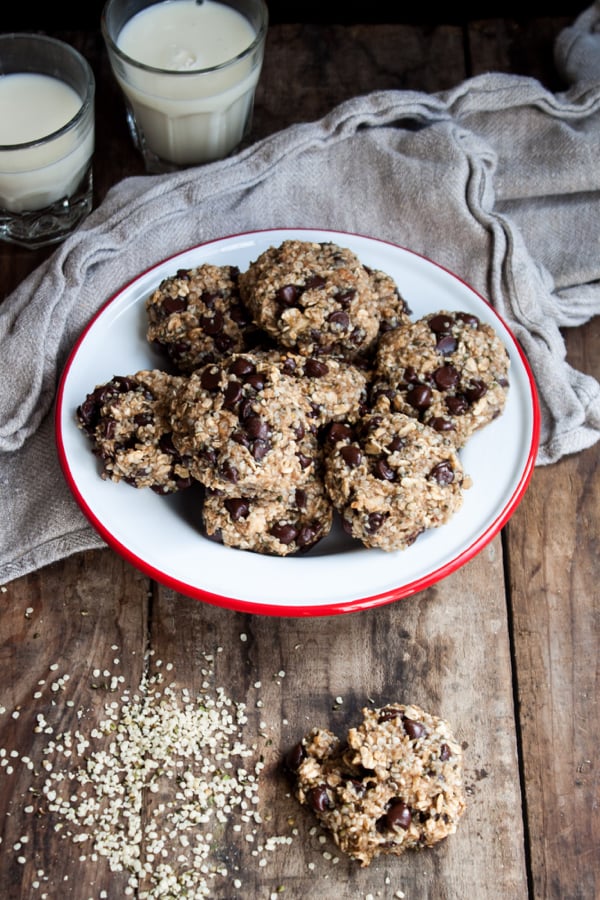 Finally, I’m in love with Shira’s banana oat cookies with chocolate and hemp, not only because they look like tasty afternoon treats, but also because they’re wholesome and feature an impressively short ingredient list. Really perfect for easy snacking and healthful desserts.

1. The Humane Society’s Paul Shapiro has an article in Quartz about the impressively rapid rise of cage free eggs and what it implies about the way we perceive our animal neighbors. The “cage free” label is certainly not synonymous with cruelty free, and it’s only one step forward for chickens. Still, it’s an important step, and the widespread consumer demand for more humanely produced eggs is, I hope, a sign of growing consciousness.

Paul suggests that the cage free movement indicates a “cultural revolution in our views of the animals with whom we share this planet”:

Regardless of what’s driving the eateries now sourcing cage free eggs–be it genuine determination to respect animal welfare or concession to consumer demand–I like to believe that the trend has meaning, and I’d certainly like to believe that it indicates greater respect for animal life.

2. A good examination of the difficulties of juggling parenting with a career in the sciences, via The Scientific Parent. The author, Gretchen Goldman, notes that the demand to publish continually in order to advance can be a true obstacle for new parents. She writes,

As I return from four months of maternity leave this month, I am even more appreciative of the tremendous challenge of doing science while meeting demanding family commitments. I was lucky to get the time off to care for my newborn, but many others aren’t so fortunate today. And even if new parents do get time off from work, scientific institutions aren’t necessarily forgiving of this time away from the lab bench.

She also has some suggests for improvement:

What can we do? We need to create a culture that is not only tolerant of scientists’ who want a work-life balance, but helps them to thrive. Better leave policies at both public and private institutions would be a great start. When academic scientists are up for tenure or applying for jobs, awards, and fellowships, selection committees should take into account any children had during that time period. This type of consideration, along with other family friendly policies, is more customary in many European countries. The US needs to catch up.

Goldman’s essay is about the sciences in particular, but I think it applies to a number of industries that use productivity as a measure of an employee’s value. I hope that some of the shifts she’s calling for will become more real for more working moms (and dads) soon.

3. A new article, via The Atlantic, on the challenges of treating eating disorders in adults. On first inspection, the article is more than a little sobering. It features some grim statistics on recovery and relapse rates for adults with anorexia, and some compelling reasons why treatment after adolescence can be such a challenge:

One reason may be that adults have simply been sicker for longer, says Angela Guarda, the director of the eating-disorders program at Johns Hopkins University: ‘The longer you have anorexia, the more anorexia creates physiological changes in the body and the brain that then create a self-sustaining cycle. You do it today because you did it yesterday…’

As well, many people with anorexia don’t grasp that they are, in fact, sick. While parents generally sign their children into treatment, that power vanishes when the child turns 18. Adult patients can also stop treatment if it gets too difficult – and it often does, because challenging the behaviors associated with eating disorders can create tidal waves of anxiety. A long-term, chronic eating disorder often ends up alienating friends and family, the very people who tend to push their ill loved one into treatment and support them through the recovery process.

The article ends on a hopeful note, though, in profiling a new treatment modality called FBT, or family based therapy. It has been studied primarily in adolescents with good results: significant improvement of short-term recovery outcomes, at least. The treatment puts parents temporarily in charge of making food and exercise decisions for their child and places a priority on normalizing weight and eating habits.

And it seems that this form of treatment may hold promise for adults with longterm ED struggles, too. Heather Purdin, the 33-year-old woman on whom much of this article is focused, seems to have gained a new sense of hope after completing the treatment, in spite of a long history of unsuccessful hospitalizations and in-patient programs. The article also contains a lot of interesting information on the possible neurochemical underpinnings of EDs.

4. A really valuable article in Forbes about the lack of ethnic and cultural diversity in the treatment of autism. It highlights a recently published article that underscores the need for more diversity in recruitment of participants for autism research studies. One of the study authors, Elizabeth West, notes that

‘The concern is that practitioners are taking these evidence-based practices that have only been applied to white children or predominately white children and are applying them to diverse children or those who may speak another language other than English.’

She goes on to detail some of the reasons why minority groups might be reluctant to participate in research studies, as well as overall barriers to a close consideration of race and socioeconomic factors in the formation of treatment options.

5. I’m a longtime fan of Ellie Krieger’s balanced approach to nutrition and healthy eating, and I appreciated her recent take on five common nutrition misconceptions. They include the idea that all breakfast cereal is nutritionally void, or the idea that everyone must “quit” sugar in order to be healthy.

I also liked her take on coconut oil. Historically there hasn’t been much information on how the saturated fats in coconut oil may or may not behave differently from saturated animal fats. Some studies have suggested that it’s not associated with increased inflammatory markers or dyslipidemia (1, 2), but the research is still relatively sparse compared to the research available on saturated animal fats. Additionally, some of the research has been conducted in cultures where coconut is a traditional food, and it’s hard to say whether the information is directly applicable to Westerners.

Krieger cites a new review study of 8 clinical trials and 13 observational studies, most of which looked at the effect of coconut oil or products on subjects’ lipid profiles (3). The study concludes that coconut oil generally raised total and LDL (“bad”) cholesterol more than polyunsaturated oils (like canola or olive), but less than butter. It’s one study, of course, but it is a review study, and it points to the fact that the jury is still out on how beneficial coconut oil might be for frequent use.

I definitely went through a phase of using coconut oil in anything and everything–partly for flavor, partly for its suitability to high heat, and partly because of the superfood lure. I’m more moderate with it nowadays–which isn’t to say I don’t still enjoy it and use it when it makes sense to. Coconut oil is awesome for baking and raw desserts, and I love coconut milk in soups and curries. Additionally, most plant-based eaters take in less saturated fat on average than omnivores, which gives us a little wiggle room with coconut (of course, this is all dependent on one’s individual needs, family history, etc.). But I stick with polyunsaturated oils (like olive, grapeseed, or safflower) and soy or almond milk as my everyday, go-to choices.

And that’s all the news, so to speak, that’s fit to print 🙂 I hope you have a wonderful Sunday, and I’ll see you all tomorrow for Menu Plan Monday!