Happy Sunday, everyone. I’ve spent most of this weekend putting finishing touches on the term paper for my psychology class. Lots of work, but it’s interesting work: I’m writing about issues that pop up routinely in these weekend reading posts.

Specifically, I’m considering the placebo/nocebo effect as it relates to our experience of food. Too much to summarize neatly here (plus I’m a little braindead from combing through citations), but the research has given me a deeper understanding of what I know intuitively from my work, which is that our beliefs and assumptions about food exert a very powerful influence on how we experience food physically.

This can be problematic, especially in cases of orthorexia or food fear. Research (albeit limited research) suggests that negative anticipation about food can cause physical distress. Presumably this is a cyclical and self-reinforcing pattern: anticipation induces symptoms, and the experience of those symptoms bolsters fear or anxiety. The potential upside would be that a hopeful or expectant posture could enhance the sense of well-being that we derive from food, too—even aside from the nutritive value we’re taking in.

Expectation isn’t the whole story, of course: plenty of other factors influence how food makes us feel. But it is remarkable and humbling to be reminded of the power of the mind to influence the body. Our professor routinely notes that the patients who are most susceptible to psychosomatic illness are also especially capable of self-healing. It’s an empowering idea, and I hope I’ll have more opportunity to explore it, especially within the nutrition realm.

I’m sure there will be more to say at when my own mind is working a little better. For now, I’m turning this post over to some enticing recipes and interesting medical reads from the last week! 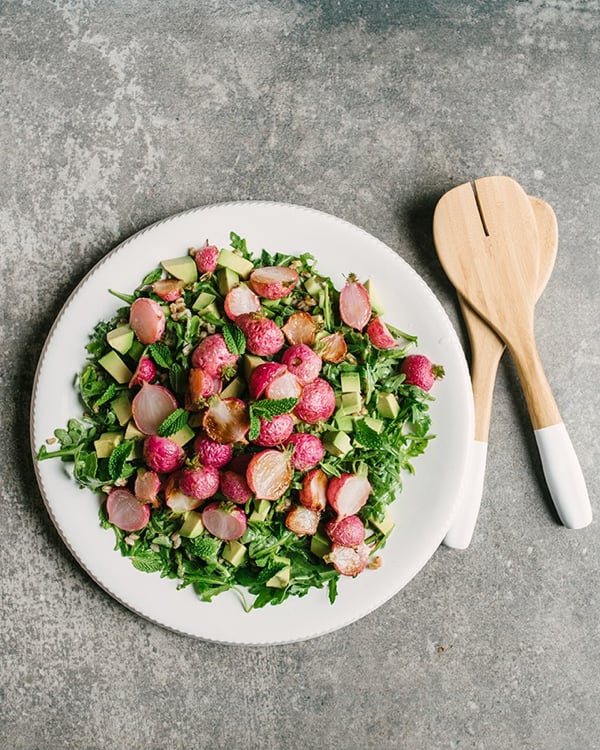 Roasted radishes are one of my favorite spring treats—it’s incredible how sweet they become, given how peppery they are! Danielle and Cameron’s roasted radish and farro salad looks just lovely. The recipe calls for butter for roasting the radishes, but you could easily use vegan buttery spread or olive oil instead. 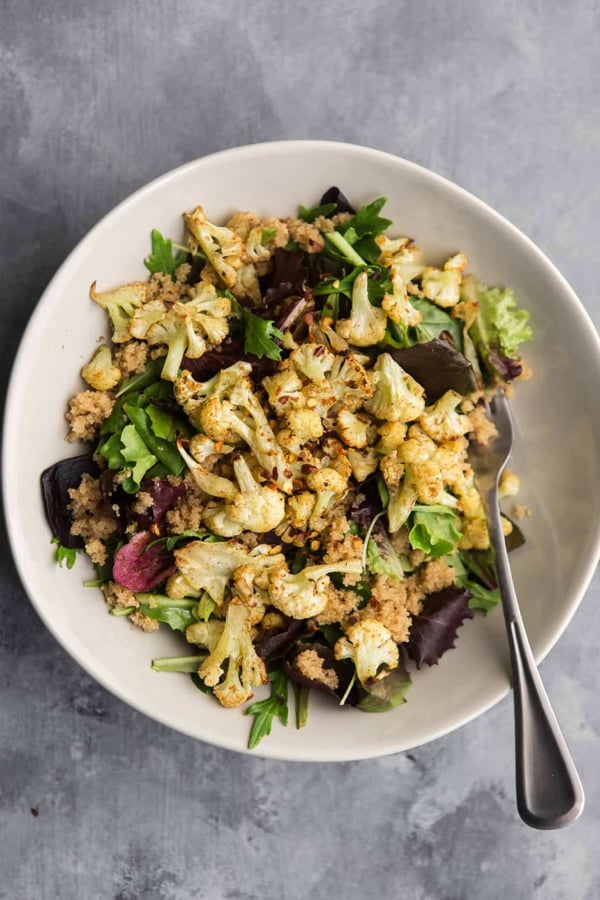 Another grain salad that caught my eye this week is Erin’s simple, vibrant coriander cauliflower amaranth salad. I really don’t use amaranth often enough, and this dish would be a perfect place to start. 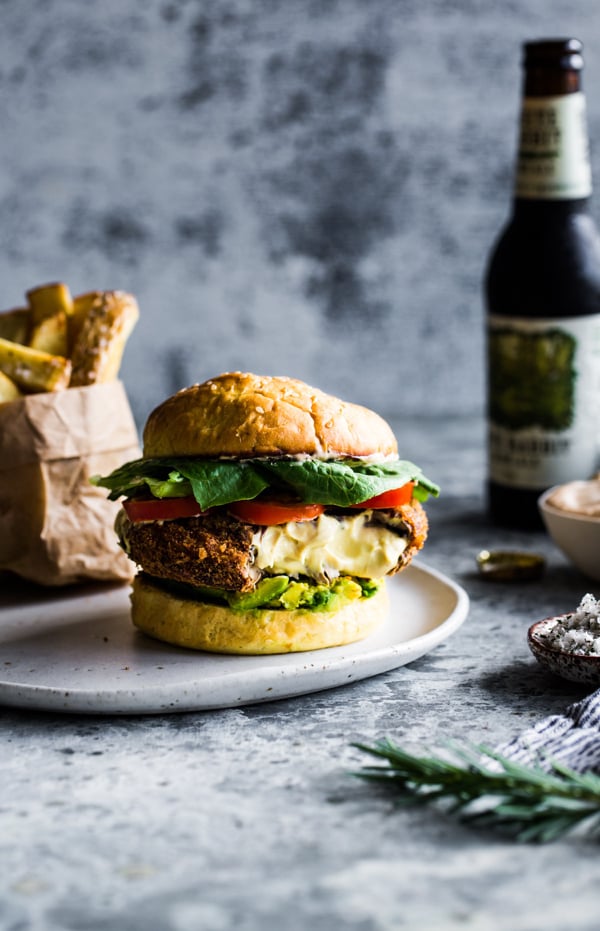 Bek’s ultimate vegan portobello burger is plant-based comfort food at its finest. It’s crusted in panko bread crumbs and stuffed with cashew cheese—how much more decadent and delicious could a vegan burger recipe be?! 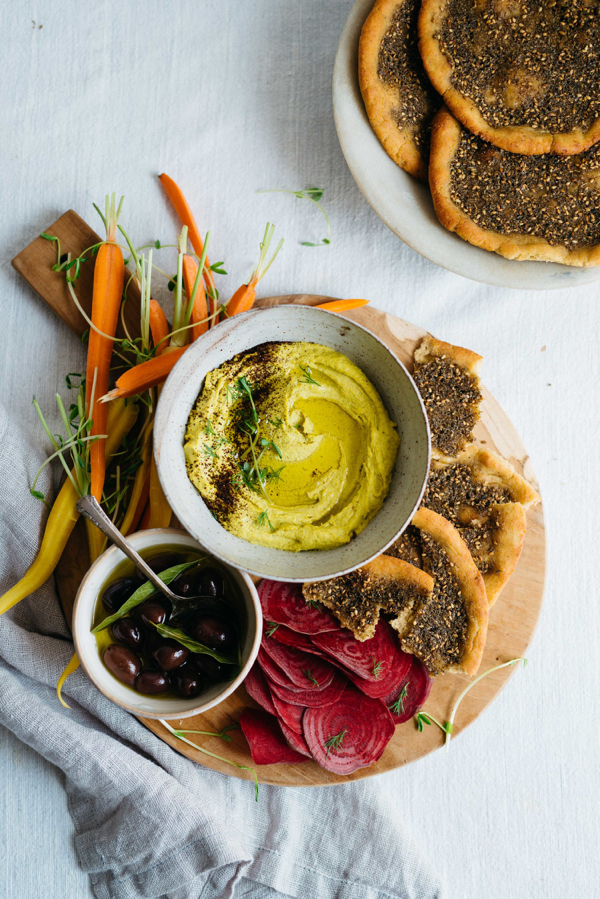 I’ve never thought to make hummus with mung beans, but Lindsey’s recipe is inspiring me. I also love her whole spread in the post, which includes beet chips, olives, and a homemade gluten-free za’atar bread. Yum. 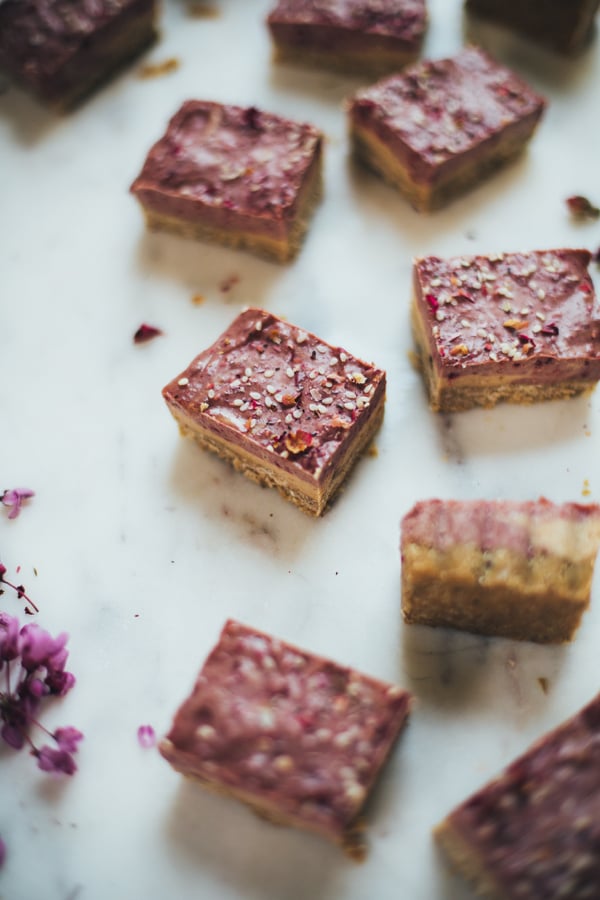 For dessert, I’m loving Renee’s pretty raspberry cheesecake bars. They’re a perfect sweet treat for berry season, which is just around the corner where I live.

1. First, a candid and sensitive essay by Jennifer Adaeze Okwerekwu on what it feels like to experience hurt feelings as a physician.

More and more, medical schools are coming to recognize the importance of humanistic care and offering training that better enables doctors to communicate with their patients. It’s nowadays understood that good medical care recognizes patients’ feelings and works to earn their trust.

But if doctor-patient relationships are to be truly bidirectional, then doctors will also experience feeling and vulnerability. Okwerekwu recounts a situation in which she administered particularly sensitive care to a patient, only to have the entire ministration be forgotten. She writes,

The day before she went home, as I had done every day, we talked about her treatment plan. A couple of hours later, I got a page — this patient was angry because she said she hadn’t been seen by a doctor that day. In those days of caring for her, I introduced myself as her doctor, I mentioned being part of her team of doctors, and I was prescribing her different medicines. All of these indicators that I was a physician, and she had no idea who I was.

At that moment, I felt so defeated. I’m often mistaken for something other than a doctor because I am female, young, and black, but it was more than that. I was disappointed because I had committed a lot of time and energy to her care. I had assumed that this would lead to some interpersonal connection — that we’d stand together in her journey to get well. I wasn’t prepared for the hurt of being abandoned on that journey.

I think it’s great that doctors are being encouraged to engage fully with the individuals they’re trying to help. But Okwerekwu’s perspective is an important reminder that deeper relationships will create the potential for hurt feelings or perceived slights on both sides—a factor that medical training should address.

2. One of the newest trends in healthcare is the emergence of high-tech apps and virtual care programs. It’ll be interesting to see how these services work for consumers and whether they can be made affordable, but some of the early feedback and data is promising.

Anahad O’Connor recently profiled Virta Health, which uses careful food tracking, blood glucose monitoring, and guidance from doctors and dietitians to help those suffering from Type 2 Diabetes. The couple he profiles used Virta to take charge of their health in a very proactive way, and their story is inspiring.

3. I’ve been struck by the co-incidence of eating disorders and celiac disease (along with other autoimmune diseases) that I see in my work, so I was really interested to read about a new study demonstrating linkages between anorexia nervosa (AN) and celiac disease (CD). The linkage seems to work bidirectionally, which is to say that those diagnosed with celiac are more likely receive a previous or subsequent diagnosis of AN.

My initial thought was that chronic health conditions have been shown to be a predisposing factor for development of disordered eating; one reason may be that patients become hyper-vigilant about diet in an attempt to manage the illness. The study authors posit three possible explanations for their findings:

I’m so curious to see follow up to this. If you want to check out the original study, you can find it here.

4. Many people consider whether they would donate an organ to a loved one who was in the midst of a health crisis, but the idea of donating to strangers feels like more of an abstraction. Dylan Matthews has some inspiring words to share about why he chose to donate a kidney and why it was less difficult—and even more rewarding—than one might imagine. Part of what makes the story so special is that Matthews’ donation wasn’t isolated:

We were part of a chain of donations that led to four people getting kidneys, all told. My recipient (let’s call him Craig) had a relative who was willing to donate a kidney to him. Unfortunately, the two didn’t match. So Craig and his relative agreed to a trade: If Craig got a kidney from somebody, his relative would still go forward and donate to someone else who needed a kidney.

So the very same day that I donated, Craig’s relative had their kidney taken out as well and flown to the West Coast. This second recipient also had a friend or relative agreeing to an exchange; so did the third recipient, who got the second recipient’s friend’s kidney. Our chain will let people enjoy 36 to 40 years of life they would’ve otherwise been denied.

Our four kidneys were pretty good, but some chains can go even longer. A chain started by a 44-year-old man in California named Rick Ruzzamenti wound up getting 30 people kidneys. Ruzzamenti’s chain let people live 270 to 300 years longer. You can literally measure the years of life his kidney donation chain gave in centuries.

The article totally changed my thinking about organ donation. I appreciate that Matthews uses approachable, commonsense language to write about a choice that might seem incredibly daunting and heavy.

5. My medical nutrition therapy class was assigned The Emperor of All Maladies last fall when we were studying cancer/oncology nutrition. It was my second time reading the book, and I was struck once again by how well Siddhartha Mukherjee captures the sheer complexity of cancer as a collection of diseases.

Ed Yong’s recent article in The Atlantic shares some similarities with Mukherjee’s. It’s a really interesting and well-written account of how researchers are coming to better understand the many pathways by which cancers can evolve and using that knowledge to develop treatment options.

Enjoy the reads, the food, and I’ll be back this week with an easy, colorful, and flavorful vegan taco recipe for warmer weather ahead.

Happy Sunday, all. We made it through our first week of 2017! One of the links I’m sharing this Sunday is Stella Blackmon‘s reflection on making friends as an adult. It’s refreshing, an honest look at how hard it can be to explore new situations, to put oneself out there, to accept that intimacy takes time. A few weeks ago, I had dinner with a friend. It had been too long–at least six months, if not more. As he and I got to…

This is the first weekend reading roundup of 2014! I’ve been catching up on work this weekend, which also means catching up on my reading. I came across some recipes that have inspired me to step into the new year with my culinary creativity in tow, and some articles that have made me think. I hope you’ll enjoy them, too. Begin your year with something hearty and nourishing. Melissa (the Vegenista) has created a roasted winter vegetable and jeweled grain bowl that hits…