I feel as though I’ve been talking a lot about the weather lately, but it’s been so unpredictable that it gives me and fellow New Yorkers plenty to say. It was mild and sunny last weekend on Easter Sunday, which made Monday morning’s rapidly accumulating snowfall a surprise. It was balmy on Friday, and it’s in the thirties now. Go figure.

My internal and external state seems to be ebbing and flowing with similar lack of predictability. My emotions have been all over the place this week: anxious one day, sad the next, perfectly at peace eight hours later. Last spring Maria shared with me the phase “emotional weather,” which stuck with me, and it feels particularly apt right now.

My body has been going through similar highs and lows: I’ve woken up on at least three mornings this week certain that I was fending off another cold; I’ll spend a day or so with a tight, dry throat and stuffy nose, only to wake up feeling sort of OK the following day.

I feel more clearheaded and less exhausted today than I have in a while, which I’m thankful for, but it’s been a long winter of being run-down. My sleep was thin and fitful throughout the holiday season, and January was marked by a lot of digestive turbulence—a stomach bug followed by the old pangs of IBS, which lasted for weeks. Throughout that time and since then it’s been one sniffle after another, and I’m moving into the time of year where it’s often hard to separate seasonal allergies from colds.

These are all small physical complaints, but in the aggregate they can feel tiring. They also drudge up an old feeling, which is discouragement—even disappointment—when my health isn’t robust. This was a big part of my own experience of orthorexia: panic and frustration whenever I experienced physical ailments, followed by desperate dietary tweaking in order to “fix” what was wrong. Back then, it never occurred to me that food wasn’t the root cause, that stress or sheer chance (running into the wrong microbes at the wrong time) might be more likely explanations of why I didn’t feel well.

Looking back on this, I realize that I was suffering from the same impulse toward control that had characterized anorexia. Orthorexia involves food and dietary habits, but for me, its truest kinship with other disordered eating was the intense desire to make my body behave. In this case, good behavior didn’t mean remaining a certain shape or weight, but rather being optimally healthful all the time.

Anorexia recovery asked me to befriend my body, to recognize its inherent value and to respect it no matter the shape. Getting over orthorexia meant letting go of the idea that my body could sustain peak performance without moments of fatigue or vulnerability. It included the recognition that vitality isn’t a steady state; it looks different from person to person, and it ebbs and flows and shifts and changes, just as we do.

This doesn’t mean that I don’t strive to be healthful and feel well. When I recognize the signs of illness or exhaustion, or when I suspect that my physical state is mirroring deep stress or discouragement—soul-sickness, I sometimes call it—I do my best to nourish and care. In these moments, I’m grateful to my body for giving me a signal that something’s “off.”

There are times, though, when chronic malaise or getting sick still registers as a trigger to the controlling and compulsive parts of my brain, still makes me feel that something is fundamentally wrong with my body. In these moments, it’s important for me to call upon my recovery tools of compassion and self-acceptance. I need to resist judging or labeling my body and instead ask myself what it’s communicating to me. And I do my best to remember that health exists on a complex and fluid spectrum, rather than a rigid scale.

Early last week I felt dissatisfied with my body for being susceptible and drained. Today I feel grateful to it, because the sniffles and pangs have encouraged me to take a look at areas, both physical and emotional, that I’ve been avoiding. It gives me food for thought and a roadmap for self-care as the new week begins.

Wishing you all clear lines of communication with your body as we move into spring. Enjoy this week’s crop of recipes and reads. 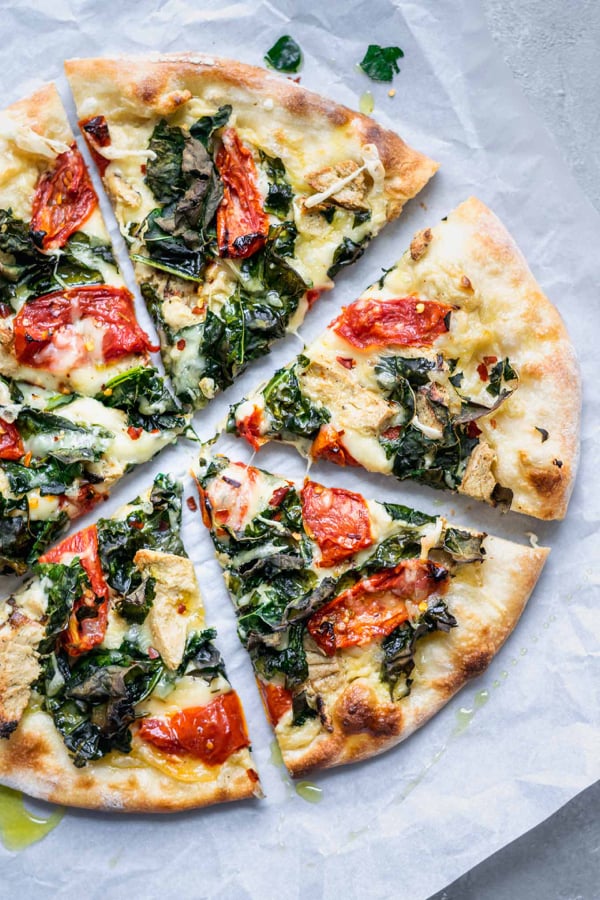 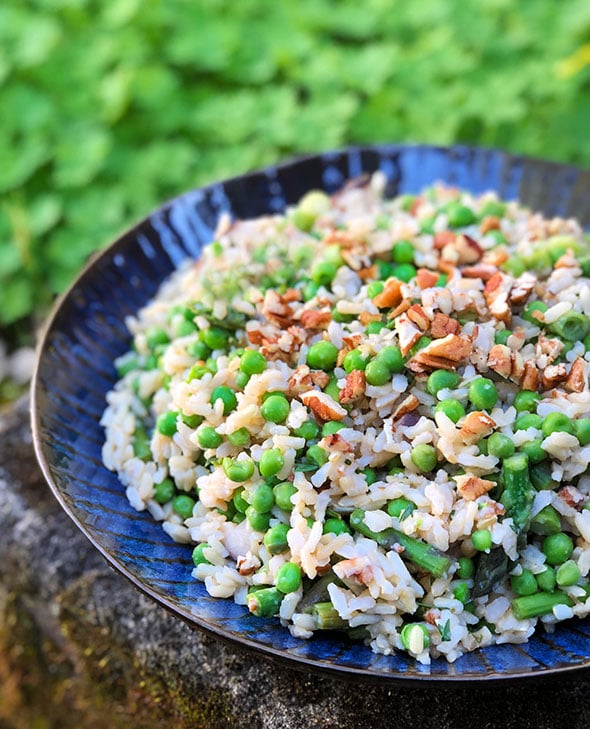 I make grain salads with so many different whole grains as a base, and I sometimes forget that rice can be one of the best and most toothsome options! I’m super excited to try Cathy’s simple, springy rice salad with shiitake mushrooms and asparagus. 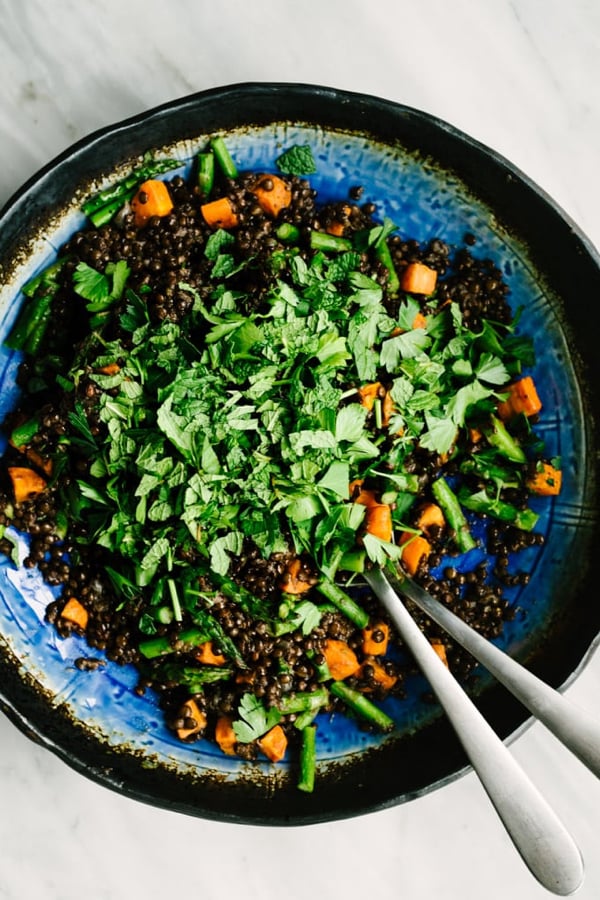 I love the lentil + roasted carrot combo (there’s a salad version of it in Power Plates), and I’m all over Danielle’s lentils with roasted carrots, asparagus, and fresh herbs. Hearty enough for cool weather but full of spring energy. 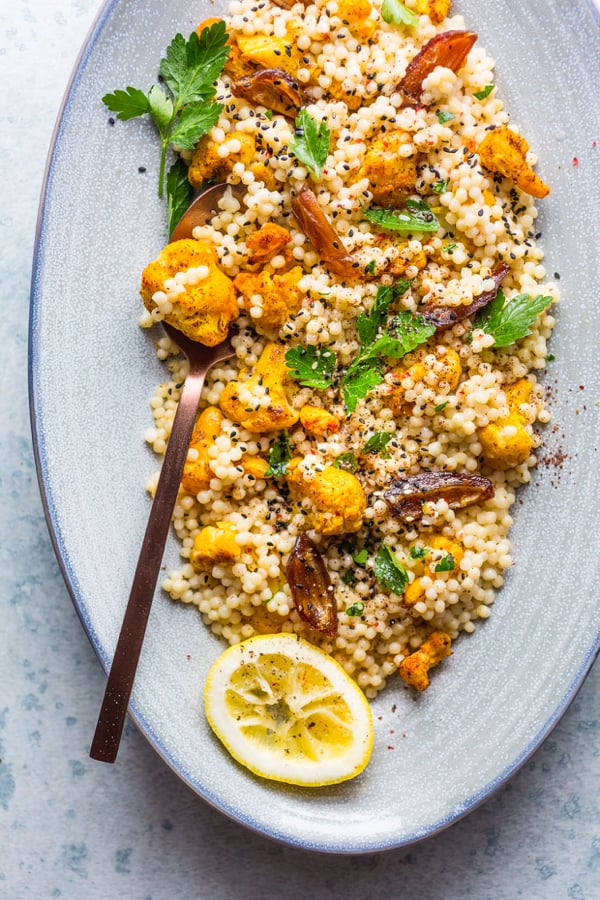 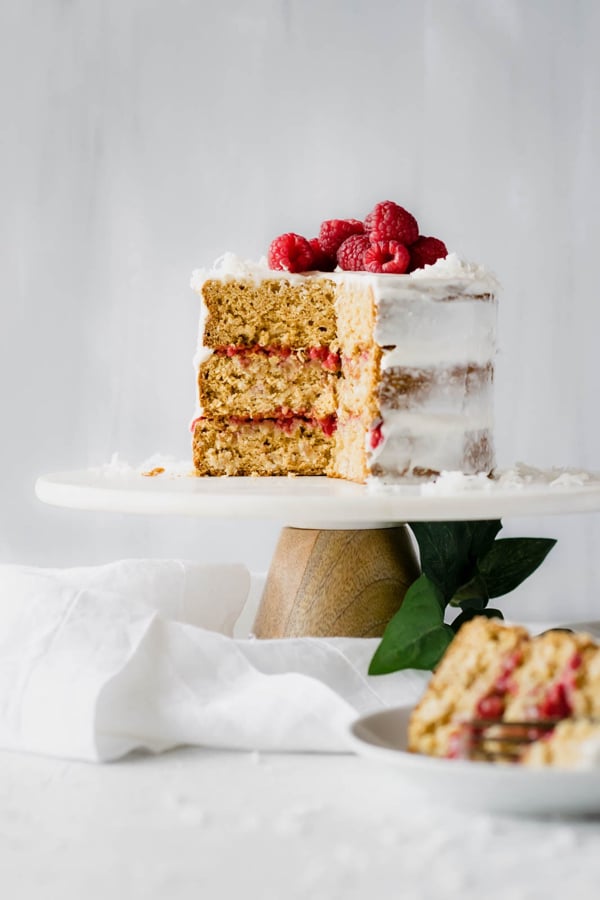 1. A new study shows positive associations between vegetable consumption and healthy blood vessels in older women. Researchers in the study, which is reported on by Health Day here, used sonograms to measure the thickness of female participants’ carotid arteries. The artery walls of women who ate the most vegetables were about 0.05 millimeter thinner than those who ate the fewest—a potentially significant difference, since a 0.1 millimeter decrease in carotid wall thickness was linked to a 10 percent to 18 percent lower risk of stroke and heart attack.

2. One of the most timely debates in healthcare is whether or not aggressive and widespread screening may do too much harm along with preventive good. I go back and forth about this, sometimes feeling certain that more information is better, sometimes agreeing with those who say that over-diagnosis substantially mitigates—and perhaps even outweighs—the benefits of many new technologies. This article provides a brief look at the controversy.

3. As that dialog continues, the value of prevention remains as strong as ever. I really like Christy Brissette’s five steps for reducing cancer risk, which feature selecting a plant-based diet and lowering red meat consumption as numbers one and two. I also appreciate that Brissette acknowledges the vital importance of social cohesion, flexibility, stress reduction, and taking pleasure in food.

4. I related to many pieces of Rachel KallemWhitman’s Medium piece on traveling and eating disorders, including what it’s like to have a fundamentally complicated relationship with travel because you’ve got stuff—anxiety, compulsions, whatever—that make changes to routine a major challenge.

The older and father away from anorexia I get, the more I can relate to her most recent sentiments about traveling: “…I feel accomplished. And content. I traveled and I enjoyed it — like everyone else seems to — and while I’m happy to be home I’m not resigned to stay still forever.”

5. Other things I relate to: nearly all of Sara Benincasa’s humorous and self-aware reflections on getting into meditation (also, getting past codependency).

On that note, wishing all of my fellow Greek Americans a very, very Happy Easter Sunday. I’ll be carting some of my favorite vegan avgolemono to my mom’s soon. And I’ll be back in a couple of days with what may be my last comfort food recipe of this winter season.

My next door neighbor—I’ll call him Glen—passed away recently. I’m not sure when. I’d known he wasn’t well for a long time, based on our passing encounters and the haunting sound of his cough echoing through the hallway we shared late at night. For the past few months I suspected things might have taken a turn, since I didn’t see or hear him. But I didn’t know for sure that he was gone until my management company started gutting the kitchen in his apartment…

Years ago, a yoga teacher of mine said something in class that sounded obvious, but wasn’t: “when it can be easy, let it be easy.” I’ve mentioned her words on the blog before, so in the spirit of the quotation I won’t overanalyze it. But I will tell you that her advice has helped to guide me through this period of anxiety. It’s been especially helpful in the last week. On Sunday evening, after I vented about my overwhelm here on the blog,…