When I was a kid, according to my mom, I used to spend hours at a time lying on the floor and staring up at the ceiling. She was the sort of parent who gave me plenty of space to do my own thing, but this habit was so pervasive that she finally asked my pediatrician about it. “She can stare at the ceilings for hours at a time,” she told him. “Should I be worried?”

My doctor—an older Greek gentleman whom we both affectionately nicknamed “Dr. A,” simply shrugged and said, “that’s her prerogative.”

When I told this story to my therapist a few years ago, we both had a good laugh, because at the time it was impossible for me to imagine, let alone connect with, this dreamy child self. Part of why I returned to therapy when I did was that I realized I’d lost a capacity to savor and inhabit quiet spaces. Life was starting to feel frenetic; I had blamed graduate school and my post-bacc at first, but it was dawning on me that the hectic pace was often a choice. When I did have pockets of down time, I felt anxious and adrift, and I filled them up with any compulsive activity I could find, from unnecessary tidying and house cleaning to checking my phone.

Since then, my therapist and I have explored what I was evading in those moments. The discovery process has been painful at times. Busyness shielded me from truths I couldn’t yet face and emotions I didn’t want to let myself feel. In this way, the “busy” persona reminds me a little bit of my eating disorder: protective in some ways, though at a terrible cost.

The biggest disservice that hyperactivity did me was to make me unaccustomed to being alone with myself and my thoughts—that magical capacity for reverie that I seem to have had as a child. Now that I recognize all of this, I do my best to inhabit stillness appropriately. Sometimes, having things to do can be a useful escape from anxiety or wallowing; when I’m depressed, it’s a blessing to have responsibilities and tasks at hand. They keep me from feeling as though I’m going to be consumed.

But I’ve grown a lot by slowing down, learning to sit with myself once again. I have no idea what I felt when I was seven years old and lying on the floor of my bedroom; these days, being alone with myself can feel spacious and peaceful and juicy at times, full of turmoil at others. But it’s good to stay there for a while, without looking to a jam packed schedule for an exit.

I spent the few days after graduation last week catching up on work stuff that needed tending to. Then, when I knew there was more I could do, but nothing urgent that I had to do, I hit pause and stayed there. I’m spending this long weekend the way I usually spend Memorial Day: savoring an uncharacteristically peaceful city.

This mini-pause hasn’t always felt good; there has been some predictable anxiety and restlessness. Occasionally I catch myself searching for an obligation; I tell myself that this would be a perfect time to read the novel that’s been sitting on my Kindle, to do the spring cleaning I never did, to catch up with a certain friend, to take a deep dive into my inbox. I’ve held back on these things, because the truth is that what I’ve really wanted to do is laze around on my sofa, binge watch TV, and occasionally cook something. All by myself.

It’s not quite staring at the ceiling for hours, but it is the most comfortable and peaceful experience of solitude that I’ve had in a very, very long time. I know that I’ll dive back into the swing of things next week, but for now, I’m surrendering to stillness, and it feels a little bit like coming home.

Wishing you all a weekend that’s as quiet or lively as you want it to be. Here are the links that caught my eye this past week. 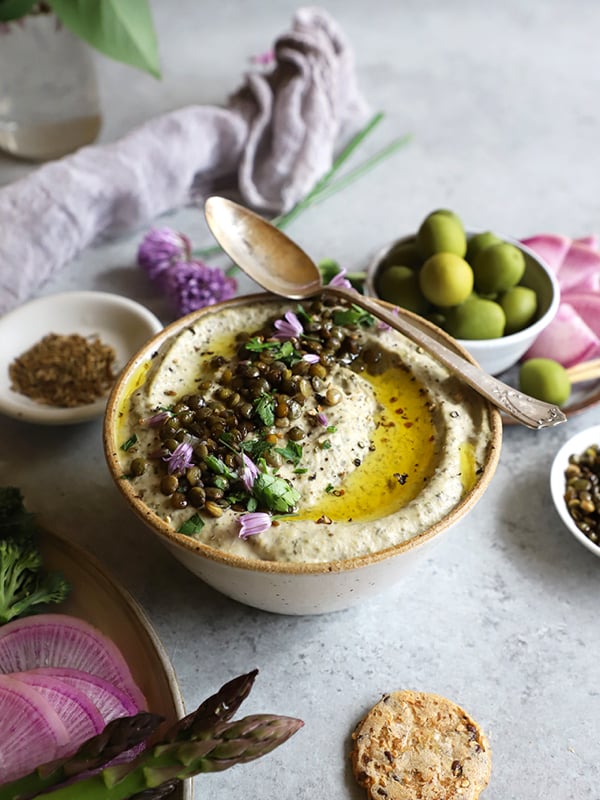 Since making this dip, I’m all about using lentils as a base for dips/spreads/sauces. Shannon’s puy lentil hummus is just beautiful. 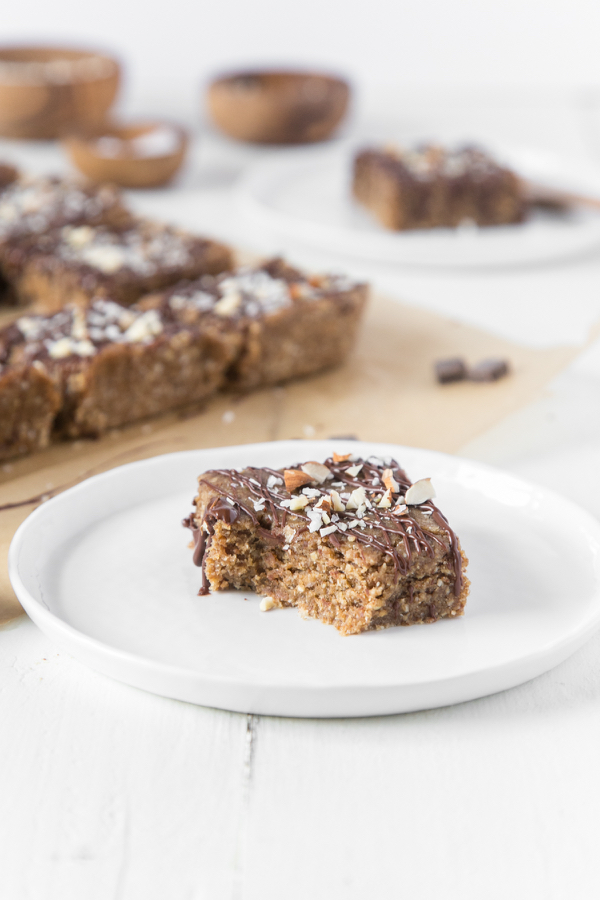 ‘Tis summer, season of being outdoors and on-the-go. I love Margaret’s no-bake chocolate almond coconut bars as a portable treat. 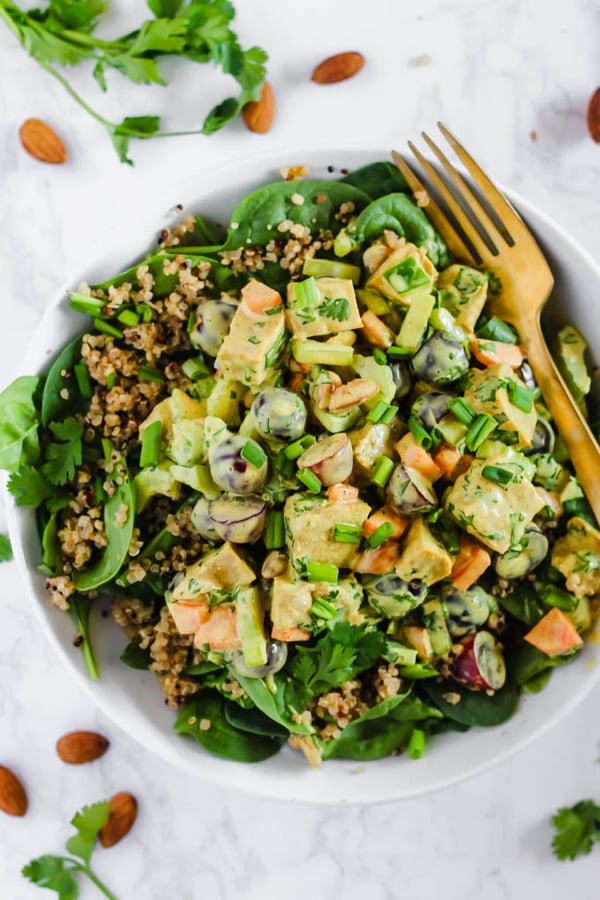 I’ve made creamy lunch salads with chickpeas, tofu, and tempeh, but never with seitan. Can’t wait to give my pal Emilie’s curried seitan salad a try. 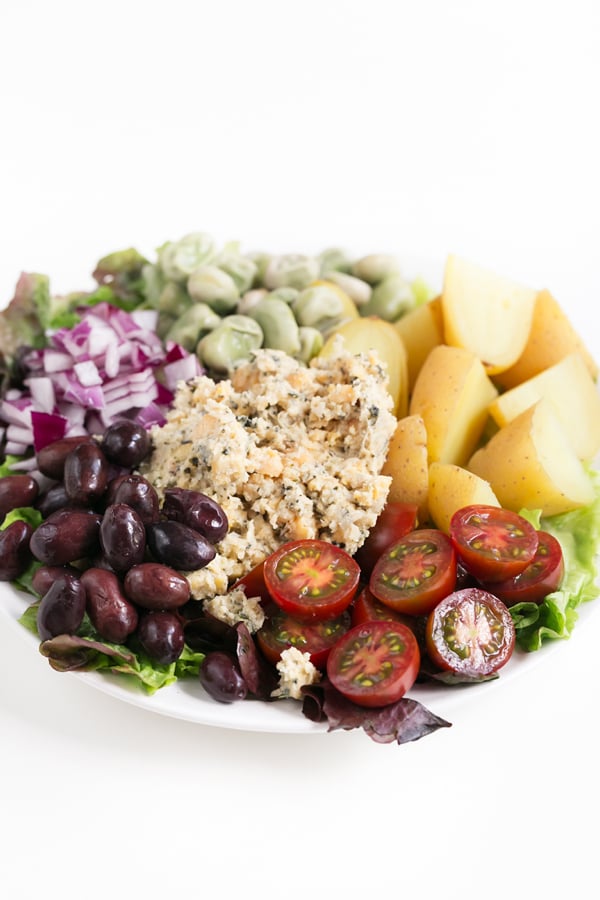 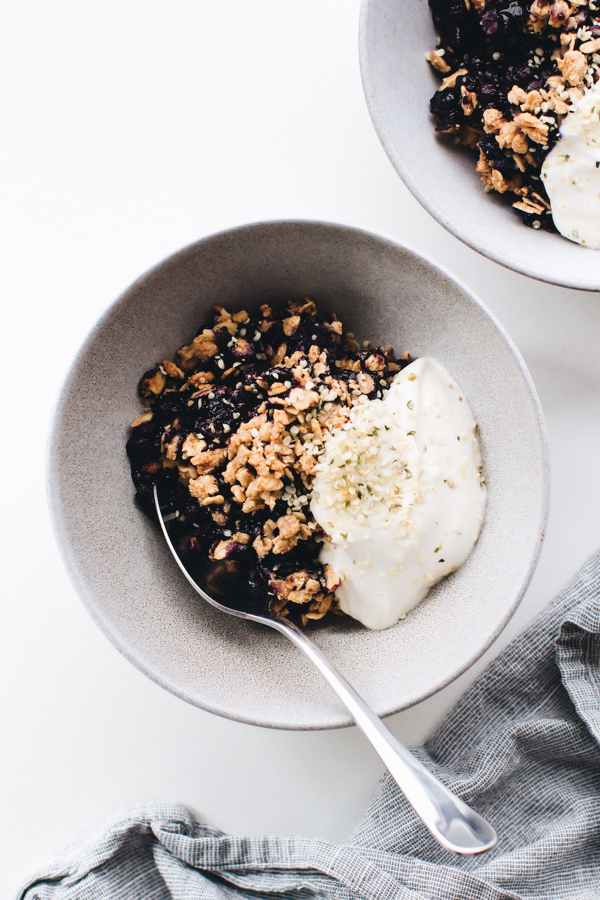 I’m so glad that crisp/crumble/slump/cobbler season is officially started, and I think I’ll be kicking mine of with Natalie’s tahini oat blueberry crumble. I’ve used almond and peanut butter for fat in baking before, but not tahini (which is crazy, since I put tahini on practically everything!). What a delicious looking dessert.

1. A thoughtful probe into our complicated relationship with animal liberation: namely, why do we cheer for animals who have escaped slaughterhouses, even as we accept the presence of those institutions in our world?

2. An interesting inquiry into the nature of coincidences and how we process them.

3. A user’s guide to recognizing the symptoms of migraines, which are often more varied and different from what people expect them to be.

4. A fascinating consideration of psychosis—in particular, the phenomenon of hearing voices—and whether it might benefit some people to engage with these voices.

5. I can’t tell you how many times a person—client, friend, acquaintance, blog reader—has told me that his or her eating disorder began with unintentional weight loss, followed by unsolicited compliments on a suddenly diminished body. I love Carrie Dennett’s seven reasons not to compliment people on weight loss (and what you can say instead).

On that note, I’m off to enjoy a little more quiet 🙂 See you this week, with a new favorite pasta/grain salad recipe!

This was one of those weeks in which nothing, big or small, went according to plan. From travel delays and disastrous commutes to missed deadlines and forgotten emails, it all felt like a mess. Funnily enough, I was OK with it. It’s funny only because I don’t typically handle curveballs well. Anything that reinforces my lack of control tends to addle me at best, freak me out at worst. This week, though, the rarest of things happened, which is that I greeted all…

What a week! Between the official release of my cookbook, a wedding upstate, nutrition counseling, and the usual culinary adventures, I feel as though time has flown since I posted my last batch of weekend reading. But here we are again, with a new crop of words and images for you to peruse. Erin’s roasted vegetable and chickpea bowl with cilantro cashew cream is calling to me. Or maybe it’s just the cilantro cashew cream, which I could probably drink straight from the food…