Happy Sunday, friends! I’m returning to New York right now from Pennsylvania, where I was lucky enough to celebrate a dear friend’s wedding yesterday. I hope you’ve all enjoyed some sunshine and rest in the last two days. Here are the recipes and read that have kept me company over the course of weekend travels. 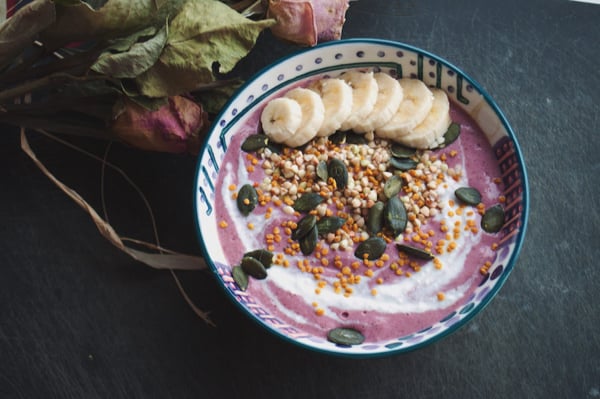 To begin, a colorful and enticing bowl of chia and buckwheat porridge from Maike of Elderflower Kitchen. 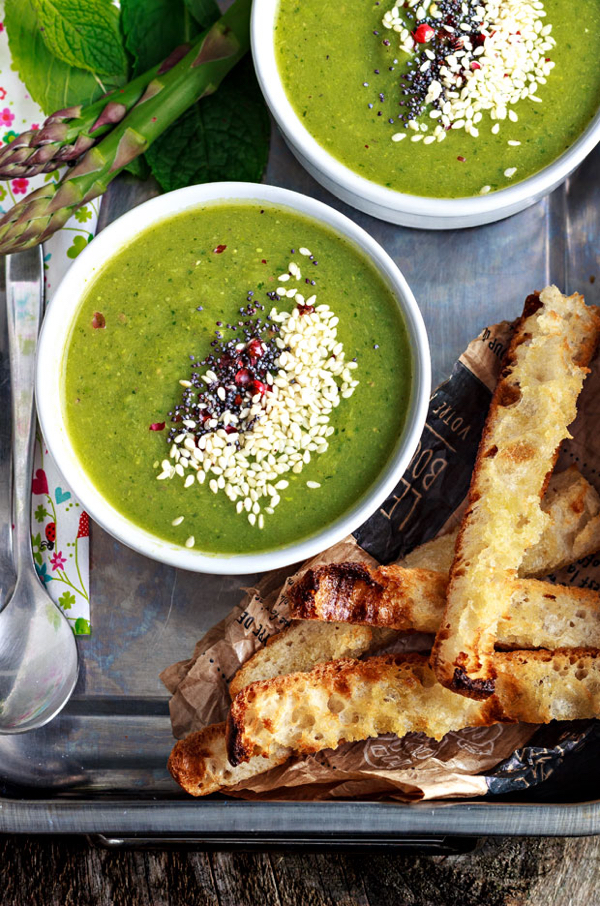 Speaking of colorful bowls, I absolutely love this easy recipe for a spring greens soup. 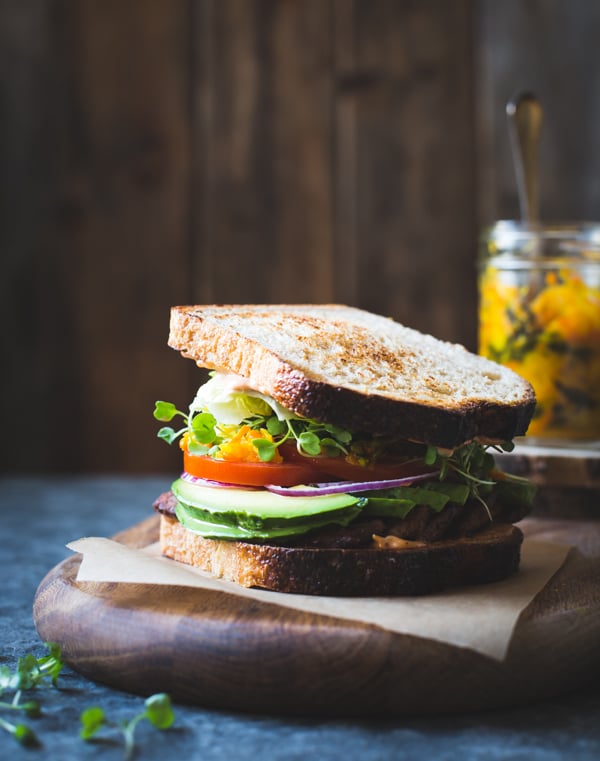 Vegan sandwiches really don’t get better than this: tempeh bacon, avocado, tomato, kimchi, and chipotle mayo. An embarrassment of riches from Alanna at The Bojon Gourmet. 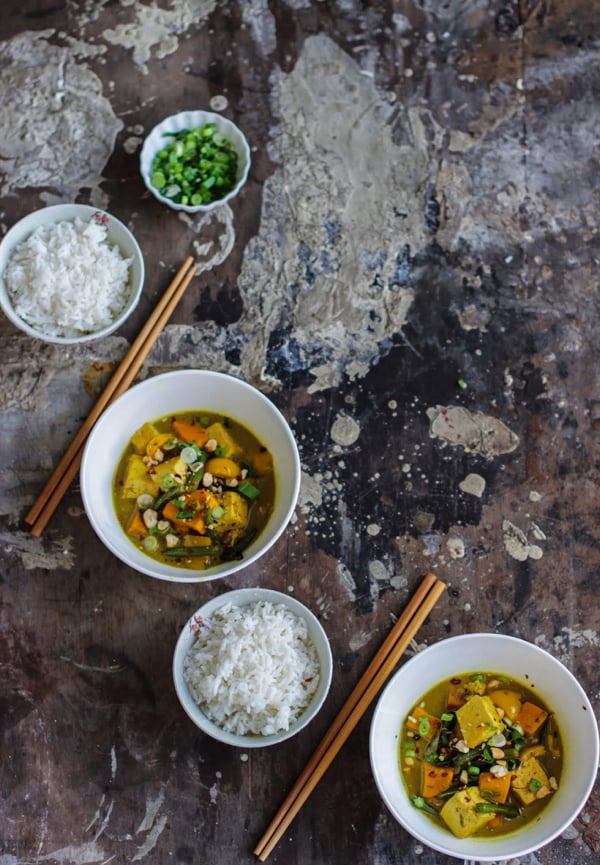 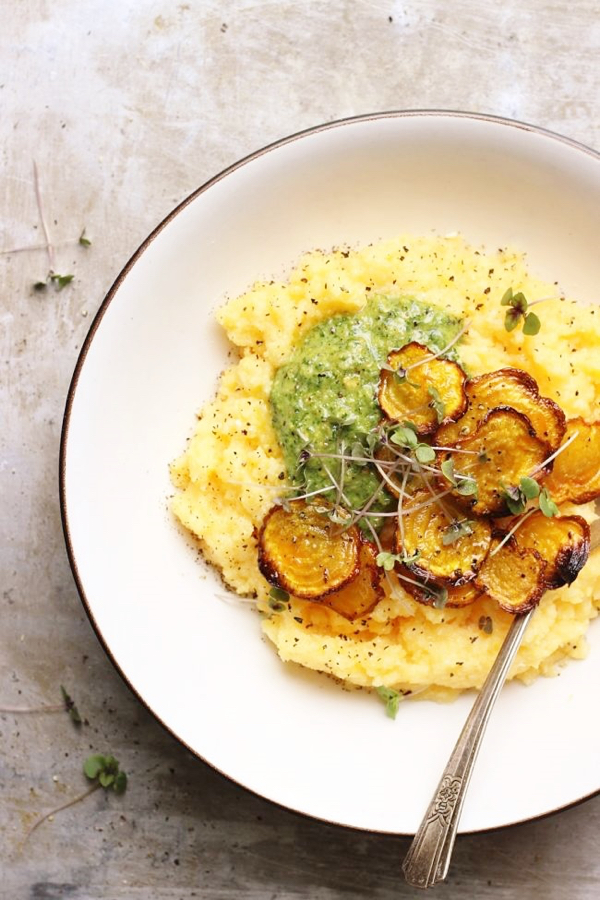 Finally, I am so totally in love with this creamy polenta with crispy beets and pistachio dill pesto, courtesy of Sherrie of With Food and Love.

1. An interesting article, published this past March in the New York Times Magazine, about the intersection of empathy and group identity. In essence, the article profiles the work of neuroscientists who are trying to figure out whether mapping neural pathways can help us to resolve global conflicts. The question at the heart of this research is whether feelings of group identity somehow block empathy, or create an “empathy gap,” and if so, whether there is a way to make empathy extend as much to one’s “enemies” as to one’s own community and culture.

2. As someone who is prone to both anxiety and stress (more of the latter but a good dose of the former), I was interested in this article’s perspective on anxiety and worry. The author’s central argument is that anxiety and worry, though potentially crippling if disproportionate or left unchecked, help us to be more self-examinatory. They may, he believes, aid in moral decision-making. I’m generally inclined to see anxiety as more harmful than helpful, but I do appreciate the argument here. It made me wonder whether my own worries do sometimes encourage me to consider my actions more carefully and critically.

3. An intense meditation on feelings of wellness and sickness–described here as states of “disorder” and “order”–from Oliver Sacks. Sacks uses his own health history as a narrative framework, drawing first on his experience with migraines and, more recently, his experience with the treatment for metastatic liver cancer. The article is somehow just as exhilarating as it is harrowing, which may be part of the point.

Interesting to think of illness as disorder. I’ve always been attached to the idea of order–and to feelings and sensation that seem to align with order. If I were to accept Sacks’ metaphor of illness as a “a general feeling of disorder,” I wonder if it would help to explain why I struggle so much with feeling unwell (a struggle that worsens the older I get). I thought the article was thought-provoking, and Sacks’ capacity for critical perspective in the face of illness is truly remarkable.

Lead author Stephen J.D. O’Keefe, a physician in the Division of Gastroenterology, Hepatology and Nutrition in Pitt’s School of Medicine, says that “These findings are really very good news…In just two weeks, a change in diet from a Westernized composition to a traditional African high-fiber, low-fat diet reduced these biomarkers of cancer risk, indicating that it is likely never too late to modify the risk of colon cancer.”

Good stuff. You can check out the study itself here.

5. A remarkably inspiring profile of Lonni Sue Johnson, an illustrator who suffers from amnesia due to her brush with viral encephalitis.

Enjoy the reads. And if you need just one more food photo to gaze on, check out my New Veganism column this week. It’s minted pea puree on toast, and it’s a perfect springtime lunch, breakfast, or snack dish. 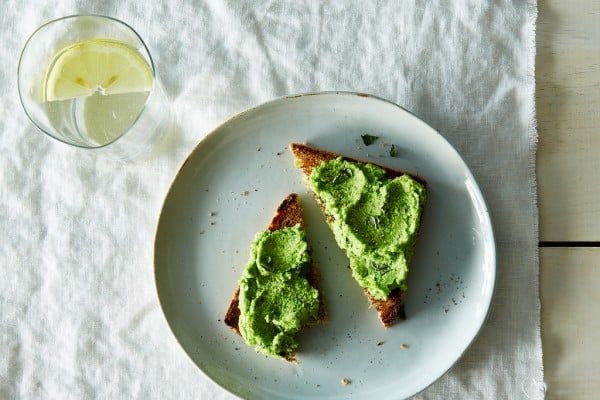