Happy Sunday, friends, and a very happy Mother’s Day to you! My mom and I have a museum trip planned later this afternoon, followed by dinner together, which will be a celebration not only of Mother’s Day, but also of her birthday, which is tomorrow. I’m excited to shower her in love and in chocolate, namely in the form of my vegan, gluten free double chocolate cupcakes. I whipped a batch of them up yesterday, and it took quite a bit of restraint not to steal a couple. 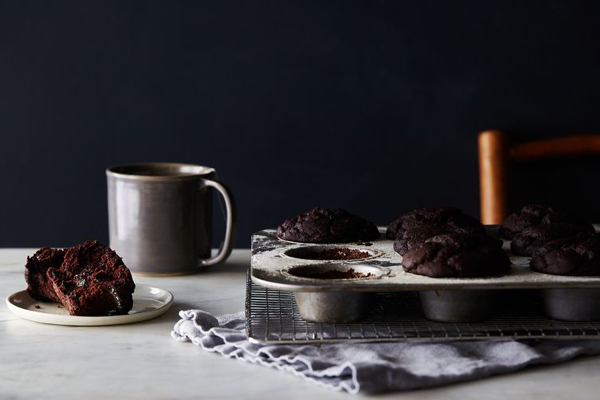 As of the end of this week, my semester is officially over. It feels both like a huge relief and also a little strange. My Advanced Nutrition II final was really difficult, and I certainly didn’t leave the room with the kind of confidence and sense of completion I’d hoped for. As is often the case, my fantasies of “perfect” endings and culminations to things leave me with disappointment, which is I think more than anything a sign that I need to expand my expectations to include loose ends, messes, and curveballs.

But, along with the sense of letdown and disappointment in myself, as well as the very peculiar sensation of having free time on my hands this weekend, there is a real happiness in being able to return to the creative part of my life, the one that tends to languish when I’m wrapped up in work and in academics. This includes cooking for myself and for Steven, scheming up ideas for the third cookbook, writing, and, of course this blog, which I love so much and miss so much whenever I feel as though my posts have had to be surfacey or rushed (which is always the case during exam time).

So, this morning, as I sip coffee and reflect on the last couple of months, I feel a huge sense of gratitude to be communicating with all of you. And now it’s time to share some recipes and reads from the past week. 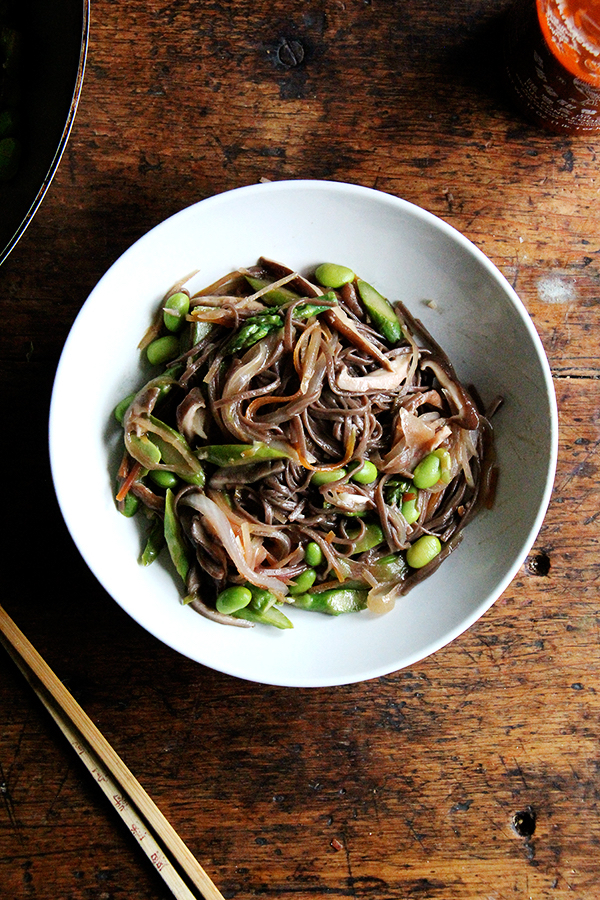 First up, my friend Ali’s vegetable chow mein-ish with asparagus, shiitakes, and edamame is precisely the sort of thing I want to make on a busy night: fast, flavorful, filling, and with plenty of nutrition. What a great, easy recipe! 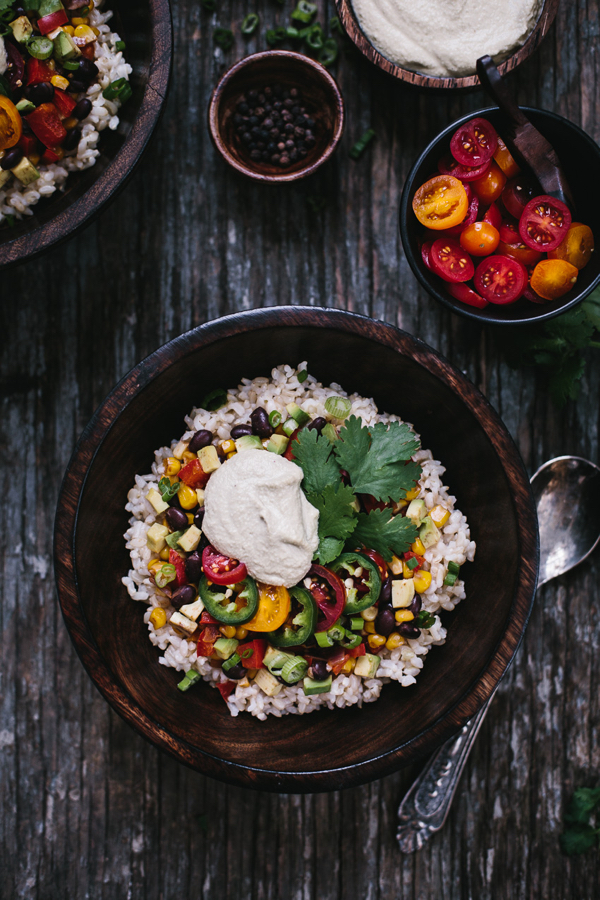 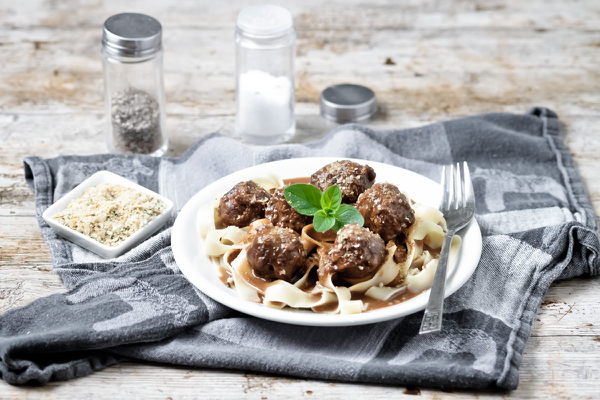 Comfort food doesn’t really get more comforting than Swedish meatballs, and this vegan rendition of the classic dish looks absolutely fabulous. There’s so much umami packed into the meatless balls and the sauce, and I love how the recipe proves that plant-based eating needn’t mean sacrificing traditional favorites. 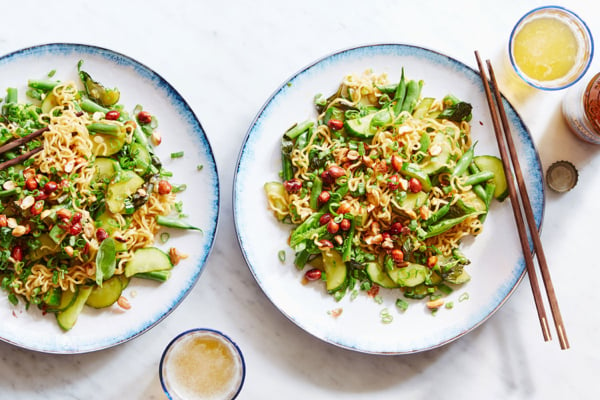 At some point in the near future New York City will stop being 55 degrees and rainy every day. When that happens, I will be very excited for more warm-weather fare, including this cooling cucumber noodle salad with basil, green beans, and peanuts. 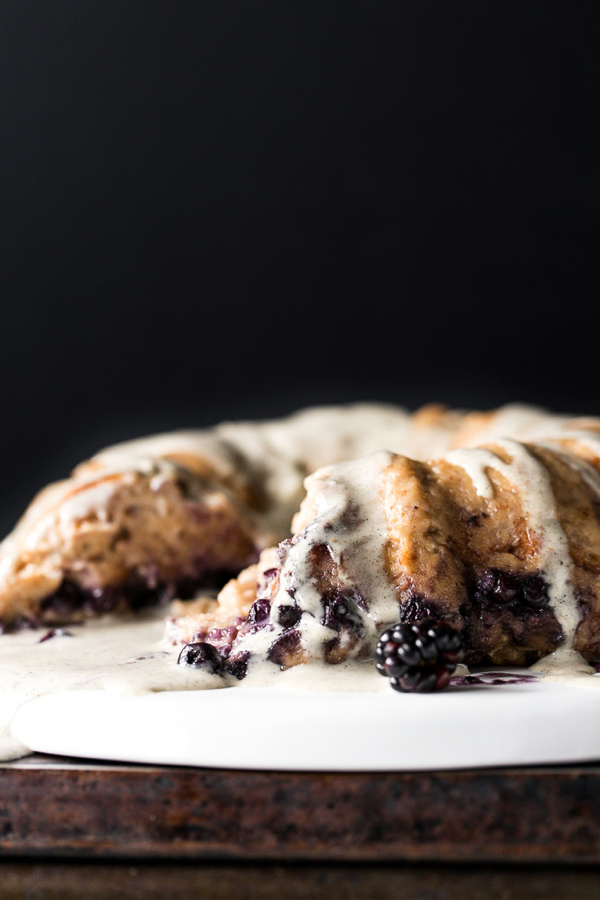 Finally, if you haven’t quite picked out a Mother’s Day brunch dish, try Ashley’s wonderfully decadent blueberry bread pudding breakfast cake with vanilla hemp creme Anglaise. It’s gorgeous, rich, and it even has a dose of healthy plant protein in the form of hemp seeds. Yum!

1. Has anyone else noticed that there’s a particular kind of protectiveness that people feel about eating fish? I can’t tell you how often peoples’ reaction to hearing that I’m vegan includes the bewildered query, “so you don’t even eat fish?” Somehow the idea of abstaining from meat, dairy, eggs, and even honey is digestible, but my excluding fish from my diet seems to trigger total incredulity.

I think part of this is that there are some well known and socially accepted health detriments to meat eating, whereas fish eating has been widely embraced as a healthful habit. There are other reasons, though, and these have to do with the way we perceive fish and our understanding of their consciousness/sentience.

This article from Saryta Rodriguez presents more data to a growing body of research that suggests that fish can indeed feel pain, and it’s a good argument in general for why we should extend aquatic animals more care and respect.

Fortunately, vegan health professionals have balanced and evidence-based responses. The latest article to catch my eye is Ginny Messina and Julieanna Hever’s to-the-point, informative explanation of phytoestrogens and how they work. It’s definitely worth reading or sharing if you (or someone you know) is trying to understand soy foods better.

3. I celebrate the rapid and widespread switch to cage free eggs as an industry standard because I believe that it indicates a strong, growing concern for animal welfare. Still, the “cage free” label can create a false sense of moral security, and it is certainly no indication that there has been no cruelty to, or mistreatment of, animals.

This week, Bruce Friedrich chats with Ezra Klein about the disappointing realities of humane egg certifications. In my mind, this is all the more reason to continue being glad that people care about how animals are treated, but to push more and more for vegan alternatives to eggs and egg-based foods, so that we can truly protect and shelter animals from captivity and mistreatment. (Speaking of, has anyone tried the Follow Your Heart vegan egg yet? I’m dying to!)

4. I was glad that you all enjoyed last week’s awesome article on the dangers and empty promises of “cleanses” and “detoxes.” Along the same line, I enjoyed this New York Times breakdown of the popular claim that drinking vegetable and fruit juices can rid the body of “toxins”–and I also like that it problematizes, as Christy Harrison’s article did, the idea that our digestive systems need to be “rested” in order to function.

5. Finally, an interesting story about our individual perceptions of art. Celeste Roberge‘s remarkable sculpture, Rising Cairn, was perceived by the artist herself as depicting an individual in the process of ascension. “I imagine her in the process of rising up from her crouching position…when she is ready,” Roberge has said.

Recently, though, a psychotherapist came across the sculpture and shared it on her Facebook page as being a depiction of the “weight of grief.” The idea spoke to a great many people, and the image–as well as therapist Janette Murphy’s poignant statement that it conveys the “physical feeling of grief”–went totally viral.

Celeste Roberge doesn’t mind that the sculpture has been greeted this way, even if grief wasn’t necessarily what she had in mind as she created it. She has very gracefully said that “I am not disturbed by individual interpretations of the sculpture because I think it is really wonderful for people to connect with works of art in whatever way is meaningful to them…If the image has helped some people to find a way of expressing their unspoken feelings, then I think that is beneficial. At the same time, I think viewers should give some thought to the artist’s intentions because the meaning of a work of art can be very complex and multi-layered.”

I think this whole story, which was written about recently in Quartz, is wonderful, both because the work of art in question is profoundly moving, and also because it illustrates how the meaning of a work of art is multifarious. It includes the artist’s intentions, the subjective responses of individuals who encounter the work, and the social and cultural significance that the work might take on over time.

And on that note, I’m off to brave the rain today. I wish you all a lovely Sunday, and I’m excited to return with some tasty fare this week!