At some point this year I realized that I was reading too much self-help. As constructive as all of the books, articles, and podcasts I was consuming were, at least in theory, the accumulation of advice was starting to stress me out.

I made that decision in December, just in time to avoid the “new year, new you” rhetoric. But I’ve dipped my toes back into the self-help genre this week. This time, the wisdom I’m looking for has nothing to do with running my business or my life. I’m having the recipe developer’s equivalent of writer’s block, and I’ll take any help I can get.

I revisited The Writing Life and Still Writing, which are both favorites. But as I was rereading them I found that they’re too focused on writing in particular to apply to my current situation, which is all about making food, not at all about putting words to paper.

Then I remembered that I’d heard about The War of Art on a podcast, and I figured it couldn’t hurt to check that it out.

The War of Art is interesting. The author, Steven Pressfield, wrote The Legend of Bagger Vance, as well as A Man at Arms, Gates of Fire, The Lion’s Gate, and a number of other novels with martial themes. Pressfield served in the US Marine Corps, and even aside from its title, The War of Art is littered with military metaphors. Pressfield claims that the Marine Corps “teaches you how to be miserable.” And the capacity to endure misery, he says, is invaluable for a working artist.

I don’t think I’ve experienced true creative misery. But I can’t argue with the fact that creative work, if you do it long enough, will inevitably involve isolation, rejection, scarcity of inspiration, and self-doubt. All of these states can be pretty miserable, depending on the day.

The central argument of Pressfield’s book is that an artist’s worst enemy is resistance. Resistance, he says, is “the enemy within.” He goes on to describe it as the force that makes us want to quit. It’s our innate tendency to get discouraged, to sink into inertia, to avoid doing the very things that are most essential for our growth and self-actualization.

I don’t like Pressfield’s treatment of mental health, but I did see some truth in the connections he later makes between depression and resistance. Among its many varieties of suffering, depression keeps me from creating. I hate looking back on a depressive period and thinking about all of the work that didn’t get done, the recipes and ideas I wanted to get out of my head and into the world, but couldn’t.

Pressfield alleges that the only way to combat resistance is to show up and be disciplined. He recommends working a certain number of hours each day, every day, and prioritizing the time however necessary. Whether those are productive working hours or not doesn’t matter, he says; you might write one page or twenty. Dedication and consistency will create conditions that make creative plenty possible in the long run.

This reminded me of my ashtanga practice, which is on my mind because I’m now one week away from being reunited with my yoga community. I’ve learned that intensity and duration matter much less than consistency. I’ve stopped caring how strong I feel or how long I practice in the morning; in quarantine, my practice has often been short and weary. What matters is that I show up and do the thing.

Showing up daily is what creates space for breakthroughs. They happen infrequently, but when they do, it’s because I’ve continued to do something—anything—each day. Even and especially when I’m tired, discouraged, or tempted to skip.

The topic of practice, whether on or off the yoga mat, is dear to me. It’s the framework that I used to understand my anorexia recovery, a process that felt all too impossible whenever I tried to think about it as a whole. I got through it by telling myself that I only had to survive one more day in recovery; if I needed to resort to a disordered behavior tomorrow, I could. But it was my job to get through the day as a recovered person.

By making this vow to myself each morning, I made it through the whole arc of recovery. I outgrew the self-destructive impulses, learned to live without them. New, self-compassionate habits ultimately sprung up and took their place.

I’ve applied that same approach—making an agreement with myself to get through hard things one day at a time—to other mental health struggles, including depression.

Practice isn’t as sexy a concept as breakthroughs or epiphanies. So often, we want growth to feel like a great moment of insight, followed by enduring clarity. But my experience has been that growth rarely happens this way. More often, it’s a matter of quiet, daily effort, and small wins. It builds on itself slowly, and progress can be hard to discern along the way.

The other thing about practice is that it doesn’t guarantee a particular outcome. You might practice in the hopes of improving, or simply to remain adept at something. But practice doesn’t always lead to commercial success or external validation. Practice teaches you to savor a process, to embrace labor for its own sake.

This brings to mind Krishna’s famous words to Arjuna on the battlefield in the Bhagavad Gita (a book that Pressfield references). “You have the right to work, but never to the fruit of work.”

Stephen Cope describes this moment as “one of the most brilliant discoveries in the ancient yoga tradition: the power of non-attachment. Give yourself entirely to your work, yes. But let go of the outcome. Be alike in success and defeat.” The Great Work of Your Life is one of my favorite books about finding one’s vocation, and I love Cope’s interpretation.

Part of my drama with recipe writer’s block is the fact that I’ve gotten too hung up on my failures, too easily discouraged by things that don’t turn out. I’m overly fixated on getting things right, not focused enough on cooking for its own sake. I do what I do because making food that I love to eat is one of the great joys of my life. Sharing recipes is an extension of that joy, but it isn’t the point.

So. I think the takeaway here is that I need to cook. Tonight, tomorrow, and the following day. What I make might be delicious, and it might be terrible. The act of making will be the thing that counts, the path that leads me home.

I’m starting with a pot of soup this evening. 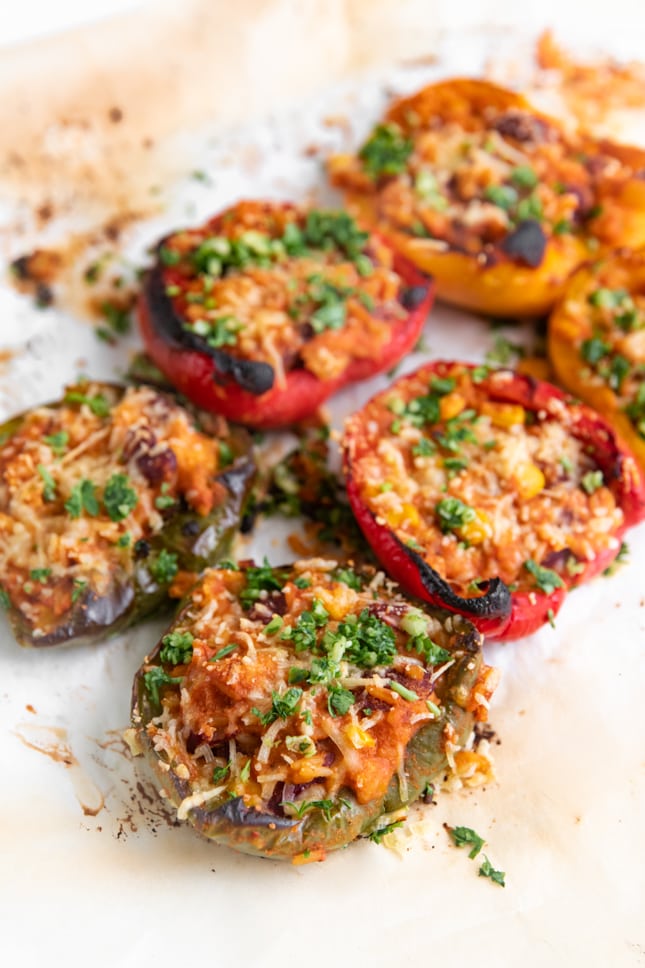 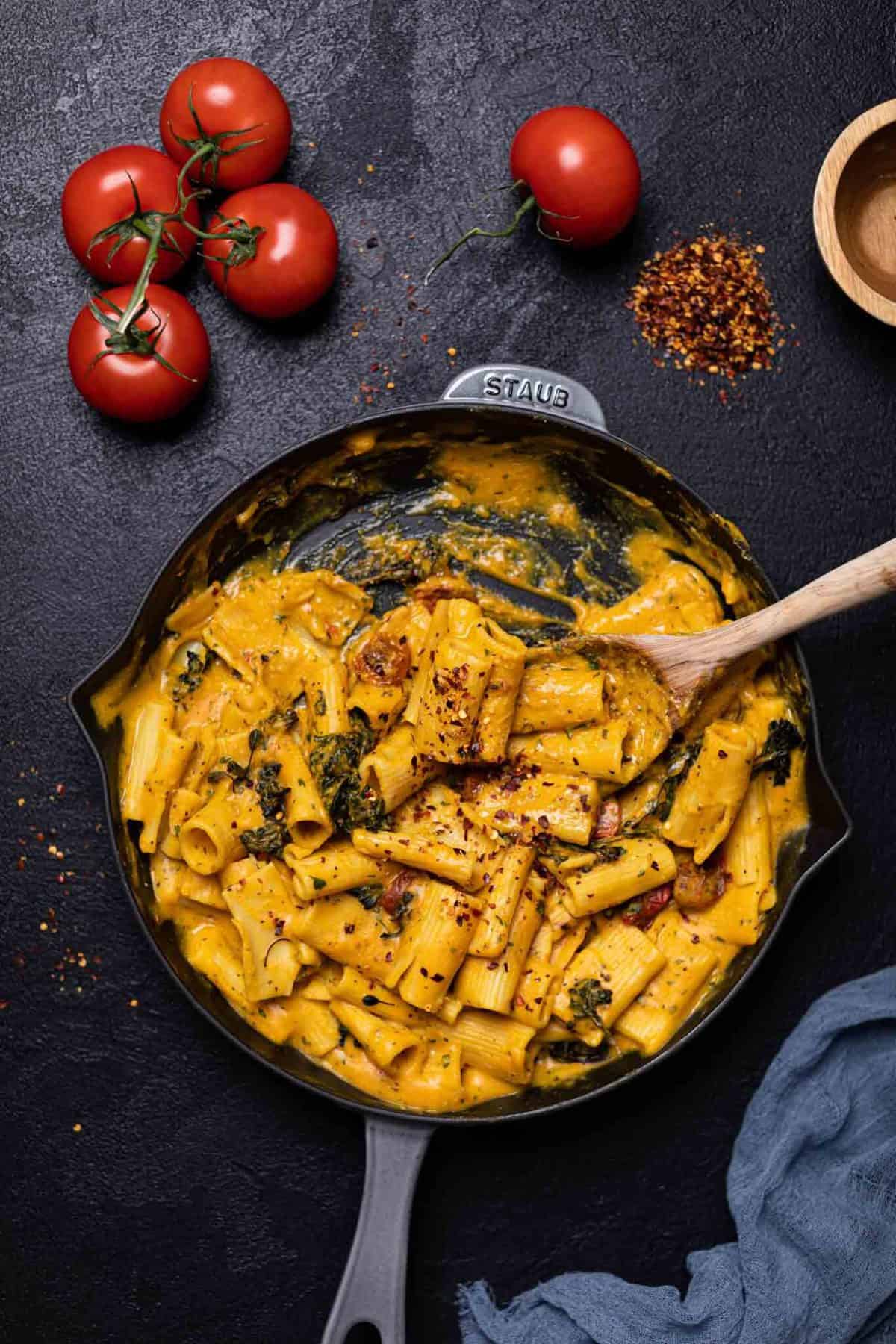 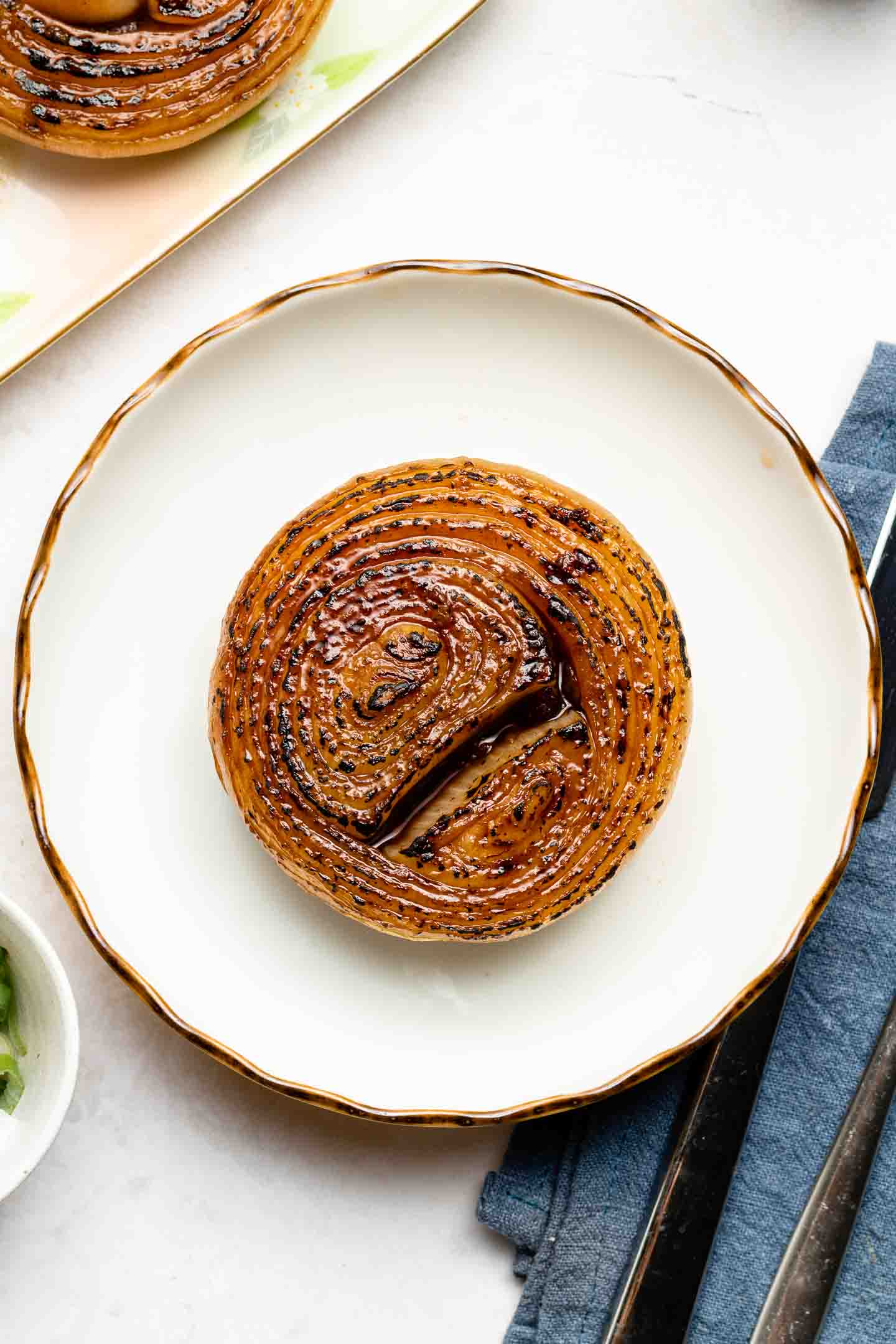 Onion steaks are such a cool idea. 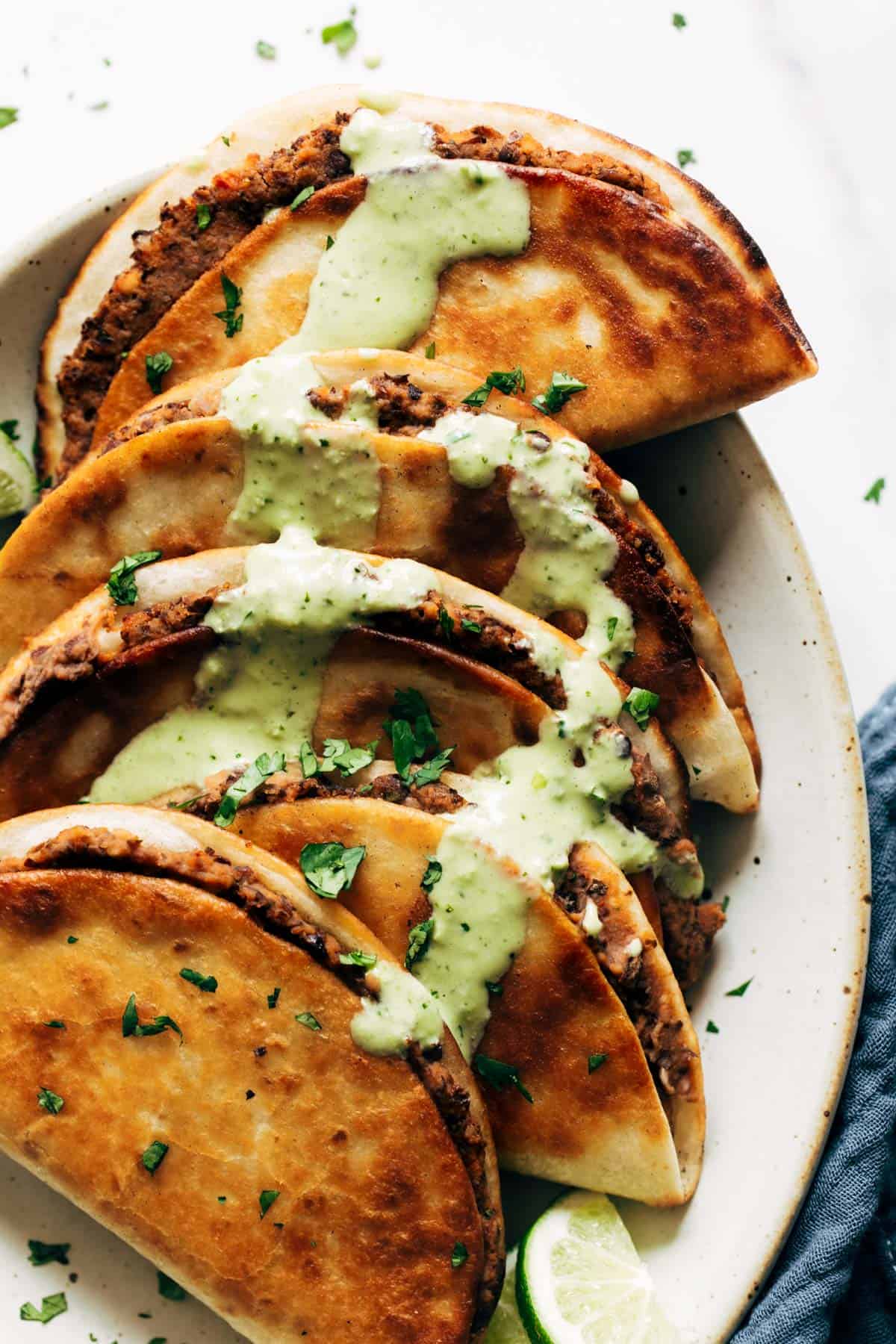 I love the looks of these crispy bean tacos! 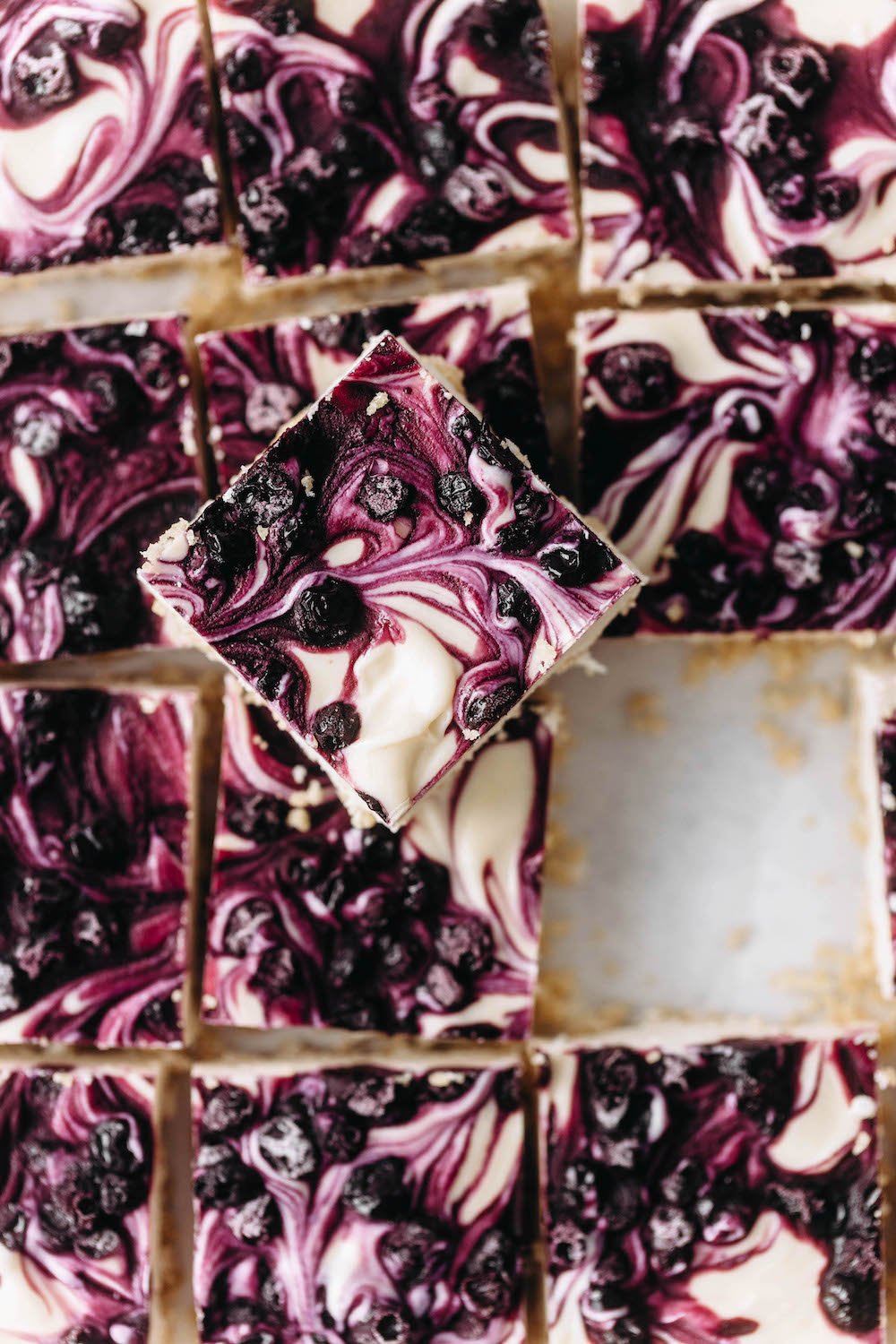 These lemon blueberry cheesecake bars are just the thing for sunnier, warmer days ahead.

1. This New York Times article about languishing has made the rounds, but it’s worth a read if you haven’t peeked at it yet.

2. Speaking of languishing, I think pandemic life has been giving me more fatigue with decision making than usual. Here’s a quick look at why making decisions can be so tiring.

3. The experience of being non-binary in a sex-segregated sports world.

4. Teaching high school poetry in the age of Zoom.

5. Finally, Emma Gilchrist’s essay on genetic mapping and peering into her origins is complex and beautiful. I love her last graf:

In the meantime, here’s what I know for sure: I have three fathers who love me. One is my true dad—the man who raised me and has always told me “the more people who love you the better.” One has the softest heart and shares my experience of being adopted. And one feels like a soulmate even though we’ve never met.

The more people who love you the better. Something I’ve been thinking about a lot lately.

Have a peaceful evening, everyone. I’ll keep you posted on the practice!

Early this week, I was flipping through Yoga Journal and found an article from the magazine’s archives, written by Keith Kachtick, about impermanence. It was written in 2008; in it, Kachtick recalls being on a trip to Miami, shell-shocked by the realization that his marriage was ending. Ambling through South Beach by himself, he stumbled on an exhibition of Tibetan art and culture that featured six Buddhist lamas completing a sand mandala in public. “[I]t was the first moment of genuine ease I’d…

As you probably noticed, it’s been a little while. There’s no big or dramatic reason for this. My capacities are just really limited right now. For the last six weeks or so—really, since the start of the new year—I’ve found myself saying “I can’t” a lot. It’s not even a choice, the “learning how to say no” stuff that so many of us are working on. It’s a limitation I can’t control, a scarcity of ability and energy that’s out of my hands….