A friend of mine told me that he recently went to a conference where all of the attendees seemed to be talking about perfectionism, in spite of that fact that it wasn’t the conference theme. They were discussing it as people who had been susceptible to impossible standards in the past, but now counted themselves lucky to have let perfectionism go.

As we were talking, it occurred to me that I haven’t thought about perfectionism in a long time, though it had a hold on me for years. Even after I stopped trying to do everything “right,” perfectionism (and to some extent, being “Type A”) was a big part of my identity. I called myself a “recovering perfectionist,” which was truthful, but in retrospect I think it was also my way of continuing to identify with perfectionism and communicate it to others. I didn’t want to be subject to oppressive standards anymore, but I hadn’t yet figured out who I was without them.

In the end, perfectionism exited my life out of necessity; I untangled from it because I didn’t have a choice. Living with bouts of depression and anxiety in the last few years has meant letting go of a lot of my self-imposed notions of what constitutes productivity, success, or a day well spent.

A common experience of depression, I think, is that small, routine asks can suddenly seem insurmountable: doing laundry, cleaning up, running errands. This would have sounded unbelievable to me at one point in my life, when these kinds of to-dos were just afterthoughts, but now I know what it’s like to struggle with the everyday.

I’m thinking back to an afternoon two summers ago that illustrates this perfectly: my anxiety had been particularly bad, and I’d been paralyzed by procrastination all day. By dinnertime I was genuinely proud of myself for having gotten out of the house to pick up groceries and mail a package. This was a radically different measure of productivity than I was used to, and it didn’t matter: I was relieved to have done something, anything.

I’m in a different place now, capable of fuller days, but my perspective remains valuably altered by that experience. I don’t wake up with a fixed agenda anymore. I don’t plan on doing more than I know I can handle. If I notice that tasks remain undone everyday on my modest to-do list, I take it as a sign that I need to plan on doing less, rather than wondering why I can’t do more.

I’ve learned that my capacity for doing and my tendency to get overwhelmed ebb and flow. Sometimes they shift for reasons that I can identify, like how I’m feeling physically or whether something has made me anxious. Sometimes they change suddenly and for no apparent reason. I don’t try to bully myself out of feeling overwhelmed; rather, I ask what would make me feel calmer and more steady.

I often remind myself of a mantra that my friend Maria gave herself when her MS symptoms started keeping her from the pace and routines that had become customary: “better than before.” The origin of this mantra was an ongoing struggle to keep tidy the home she shared with her young son. As Maria’s “functional self” receded, she noticed the presence of another self, who “though less physically versatile, was stronger than I ever could have imagined from the perspective of the one who functioned’ throughout the day. She began to show me things my functional self simply missed.”

One of those things, she goes on to say,

was to be able to notice when I was completely out of energy to exert myself. This might be when something was halfway wiped, or not wiped at all, but I had somehow managed to put some things away. She would know to say that’s enough for now. And she was very clever about what would satisfy my functional self, who would never have been satisfied with that’s enough. It sobered that functional self to learn when the diagnosis of MS finally came that the “forcing” she had habituated herself to was the worst thing to do if she wanted to preserve her physical abilities.  But as the saying goes, it’s really true that you catch more flies with honey than vinegar. So my deeper wiser identity came up with something even more ingenious than this looming threat:

Better Than It Was.

Or, (depending on the context): Cleaner Than It Was.

These two statements became my mottos. And they still are. They allowed me to learn to pace myself while still satisfying that Functional Self that I was making what she considered progress through the daily requirements of life, even if many of them were slowed to a crawl or a downright standstill.  Better Than It Was.

Maria’s story is uniquely her own, and my own sense of high functionality has shifted for reasons that are uniquely mine. But her clever motto has given me great comfort since I first read about it on her blog. So, too, does this quote from Melody Beattie: “Our best yesterday was good enough; our best today is plenty good too.”

The best thing about letting go of perfectionism is developing a capacity to recognize that “our best” can look very different from moment to moment. There’s no longer an immovable standard of output. I wish that I’d been able to pry my ego away from productivity and being busy on my own, rather than being forced to reckon with a dramatic shift in my capacities, but in the end, it doesn’t matter how I got here. What matters is that I’m learning to be grateful for what I can do, rather than fixating on what I haven’t, or can’t.

Throughout all of this, I’ve had the tremendous luxury of being able to adjust my schedule and responsibilities in a way that allowed me to create a dynamic “new normal.” Not every person has the space to do this, depending on his or her professional and personal circumstances. I recognize and respect the many men and women who go through periods of depression and anxiety while also keeping up with fixed schedules. And of course I worry sometimes about my DI year: now that I’m learning how to take gentle care in the moments when I need to, what will it be like to temporarily lose control of my schedule and workload?

I don’t have an answer, but to some degree I suspect that I don’t need one. My routine next year will be a challenge, but so long as I can do my best without succumbing to the influence of perfectionism, I know I’ll be OK. Much as I’ve made my schedule more realistic, letting go of perfectionism has been an inside job. It resides in recognizing how futile perfectionism is, how it discourages me needlessly while keeping me from recognizing the good that I can do, and maybe have done (another observation that’s prompted by Beattie).

Here’s to a week—and a month, and a summer, and a year—of doing my best and trusting that my best is enough. I wish the same for you, too. And here’s the weekly roundup of links. 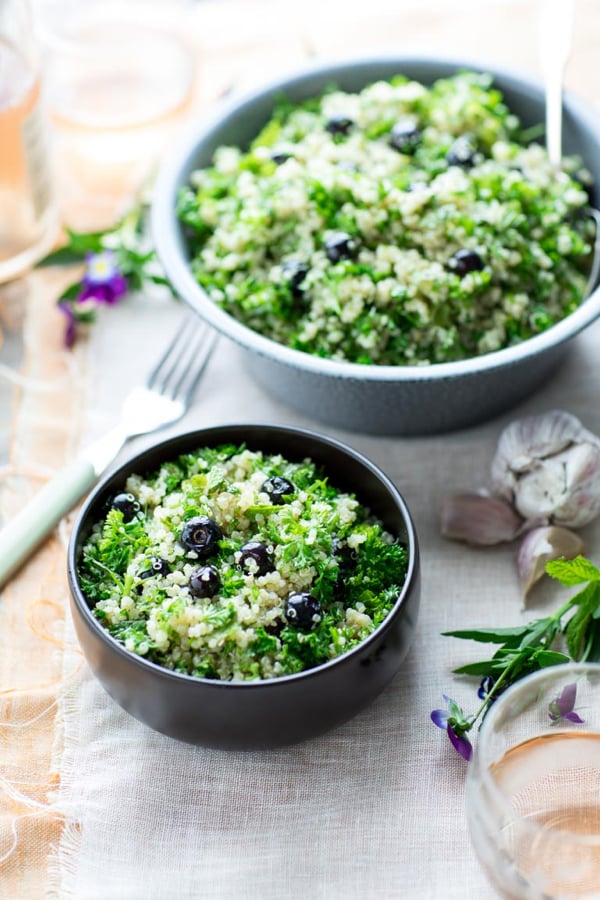 I would never think to put fruit in a tabbouleh, but I love Katie’s creative mixture of blueberries, parsley, mint, and quinoa—I’d actually love to try it as a savory breakfast dish! 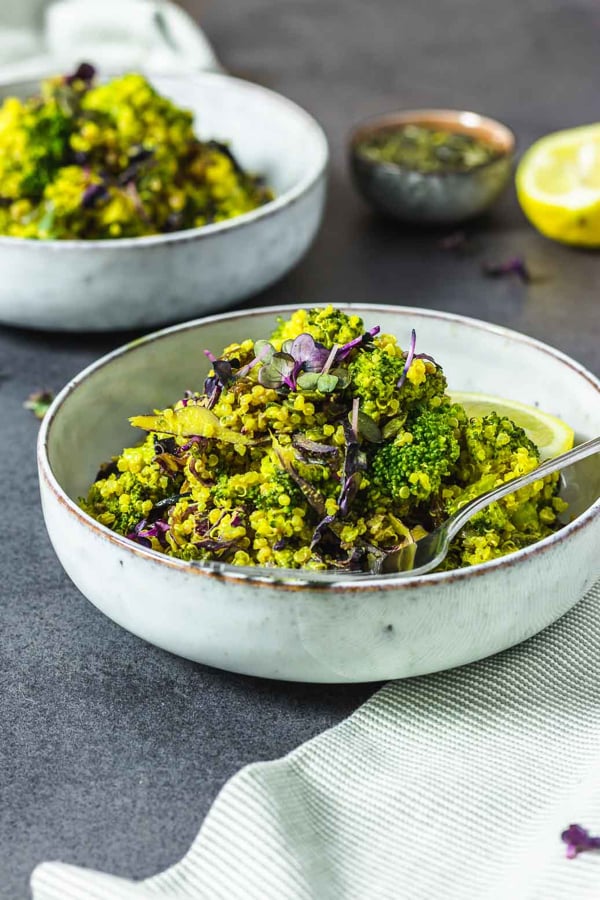 A very different kind of quinoa salad, but no less delicious: a curried mixture with red cabbage, raisins, and pumpkin seeds from Melanie of Veggie Jam. 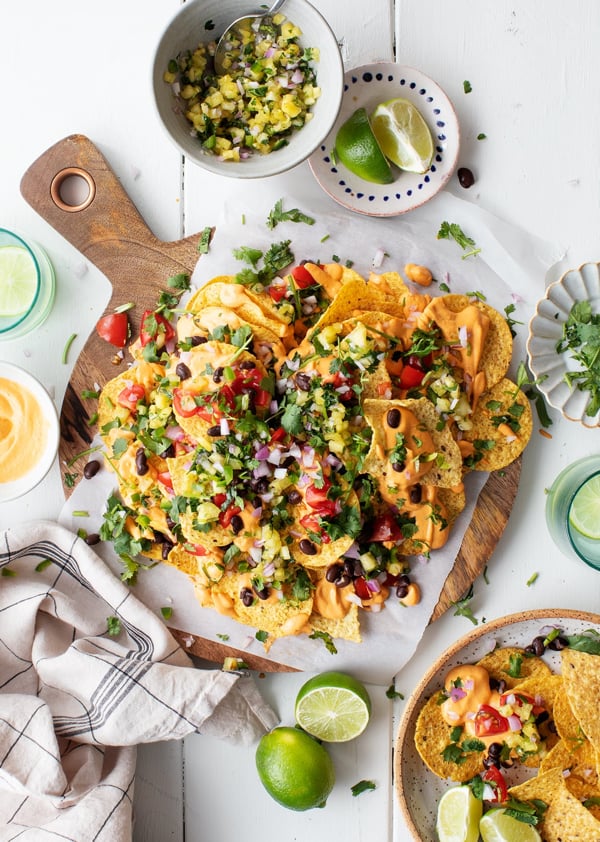 Two recipes for summer entertaining caught my eye this past week. The first is these show-stopping chipotle cauliflower nachos from my friend Jeanine of Love & Lemons. 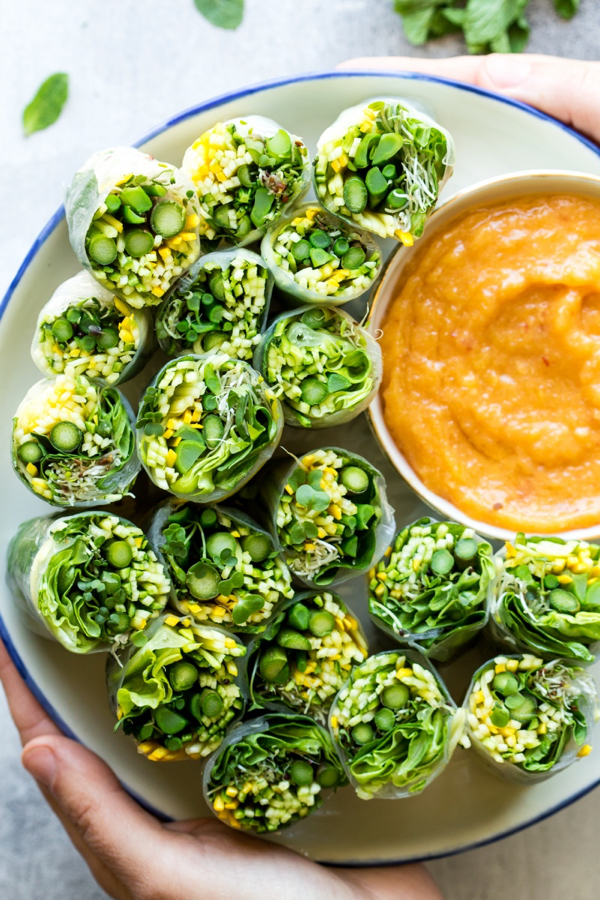 Number two is this platter of green summer rolls with mango miso sauce from Anya of Lazy Cat Kitchen. The sauce alone is calling to me, but I also love all of the tender green veggies here (asparagus, zucchini, broccolini). 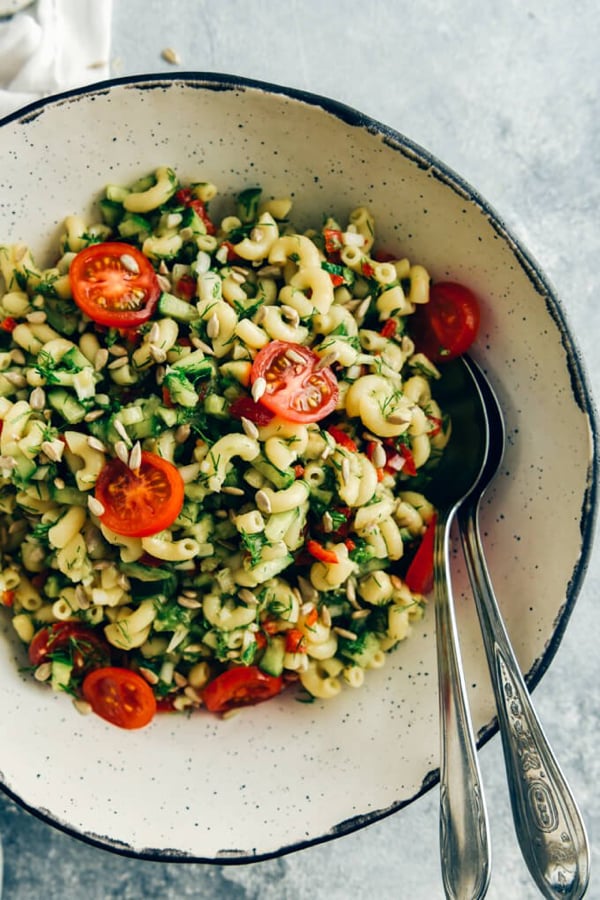 Finally, a summery vegan pasta salad with creamy avocado dressing—perfect timing, as pasta salad’s been on my mind lately (and I may just have a recipe coming soon!).

1. This article is about a month old, but it’s very on-topic for today’s post: why you should stop being so hard on yourself, via The New York Times.

2. Ed Yong’s new article on the threat of imminent global pandemics frightened me (and the blurb under the title didn’t help), but it’s an important topic, and I’m glad that it’s being written about. Yong notes the medical supply shortages that are becoming increasingly problematic in the US; hopefully greater awareness might somehow inspire solutions.

3. Reporting on the termination of a major NIH study of alcohol, heart attack, and stroke, which was shut down when conflicts of interest were identified. It’s an important examination of the ethics of funding and scientific research.

4. Dispatches from the Gulf of California, where the vaquita—now the world’s rarest marine mammal—is on the brink of extinction.

5. I was so full of appreciation and respect when I read my friend Karen’s latest post on numbers and body acceptance.

Like Karen, I went through a long period of asking to be blind weighed at the doctor’s office and not owning a scale. That time served a purpose, but nowadays I can be aware of the number without identifying with it, which I’m grateful for. I’ve had a bunch of doctor’s appointments in the last month, and getting weighed has been the last thing on my mind: feeling more at home in my body has been my only point of focus.

Karen opens up about her own recent experience with the scale and the annual physical, then reflects on why she’s committed to being transparent about what “balance” looks like for her. It’s great to witness her journey unfolding.

On that inspiring note, happy Sunday—and from a celebratory NYC, happy pride! I’ll be circling back this week with my first fruit-filled dessert of the summer.

Happy Sunday, all! I’m back from Melissa‘s wedding, where I had an absolute blast. I’ll have a recap tomorrow, as well as a new recipe for you, but for tonight, a late edition of “weekend reading” 1. Miso Sesame Squash Salad from Love and Lemons 2. Tofu Amaranth Salad from 101 Cookbooks (yay! another use for amaranth) 3. Coco Mint Shake from Young and Raw 4. Pumpkin Pistachio Kale Fried Rice Bowl with Maple Tofu Cubes from Healthy Happy Life 5. Apple Cinnamon Bars from Sweetly Raw (genius,…

Thanksgiving this year was a surprise. For weeks, I looked forward to it as being a homecoming of sorts. It was the first Thanksgiving that my mom and I have had on our own since 2012, when we ate at Candle 79. We did the same this year, and I think a part of me expected the whole ritual to be as if nothing had changed. I thought it might momentarily feel the way things did before the end of my post-bacc, before…