Happy Sunday, friends! I hope you’ve had a nice weekend.

I’m moving into the home stretch of my summer MNT class, and I couldn’t be more ready for it to end. It has been interesting, for sure, but I’m ready to turn my attention to my work for the remainder of the summer. Steven and I have a quiet 4th of July weekend planned at home, and it’ll be a great opportunity to rest, cook, and catch up. In the meantime, one more exam and one more assignment to go.

Lots of delicious, simple, summery eats to share with you this week, from pasta to popsicles. Here’s what I’ve been bookmarking. 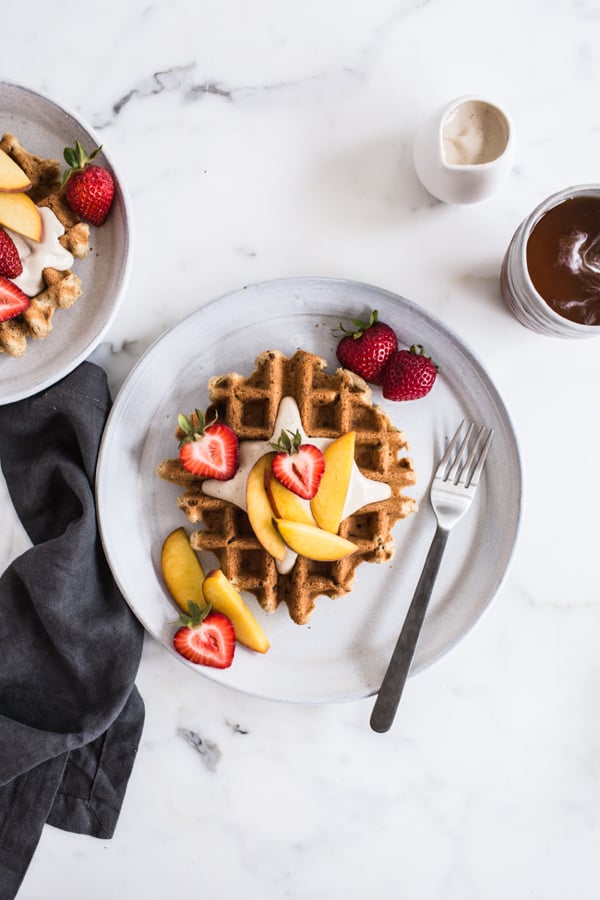 First up, I can’t stop drooling over Ashley’s gorgeous vegan and gluten free vanilla waffles, which are topped off with vanilla cashew cream. The waffles use aquafaba as a binder, and Ashley says it took her 10+ tries to get them just right. I rarely have the patience to stick with a recipe for that long if it’s not turning out for me, so I’m super impressed with Ashley’s persistence, which was clearly worthwhile. These are beautiful, and I can’t wait to try them. 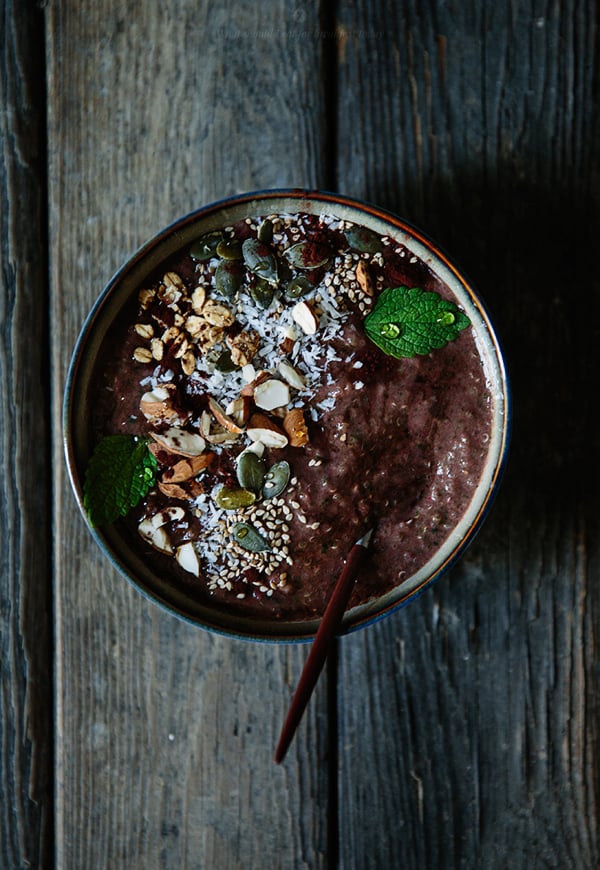 A very different, yet equally delicious breakfast idea: Marta’s chocolate fruity breakfast quinoa with nuts. It’s basically a chocolatey smoothie with cooked quinoa stirred in and plenty of crunchy toppings. I love this idea; smoothies rarely satisfy me anymore as a breakfast option, but I can definitely get down with morning smoothies if they happen to include some wholesome grains and nuts or seeds. 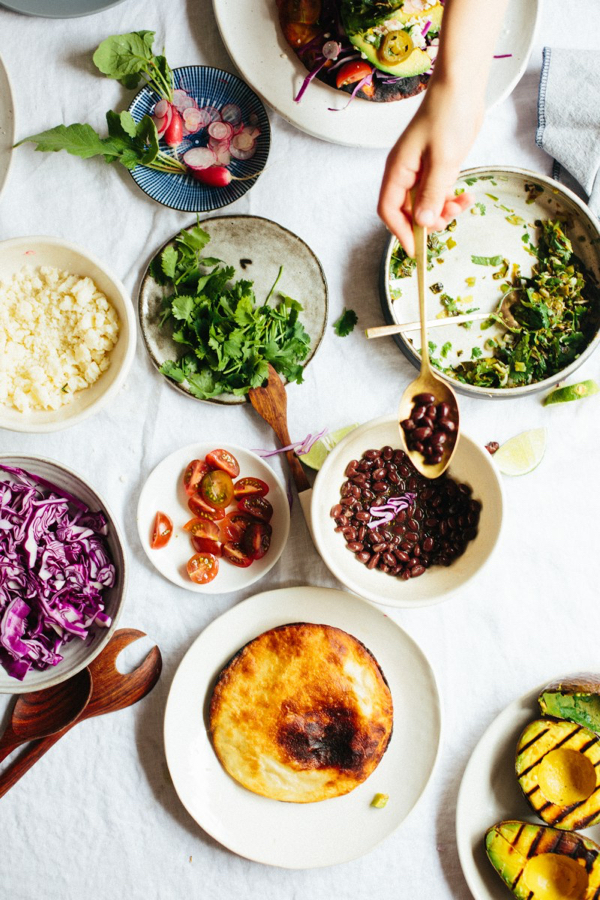 Speaking of breakfast, tostadas are probably my favorite breakfast these days, and Ashley’s grilled avocado tostadas with black beans and charred scallion salsa are calling my name. Just check out her beautiful and abundant spread, featuring perfectly grilled, tender avocados! The scallion salsa alone is a wonderful idea for adding flavor and smokiness to bowls, salads, and wraps. 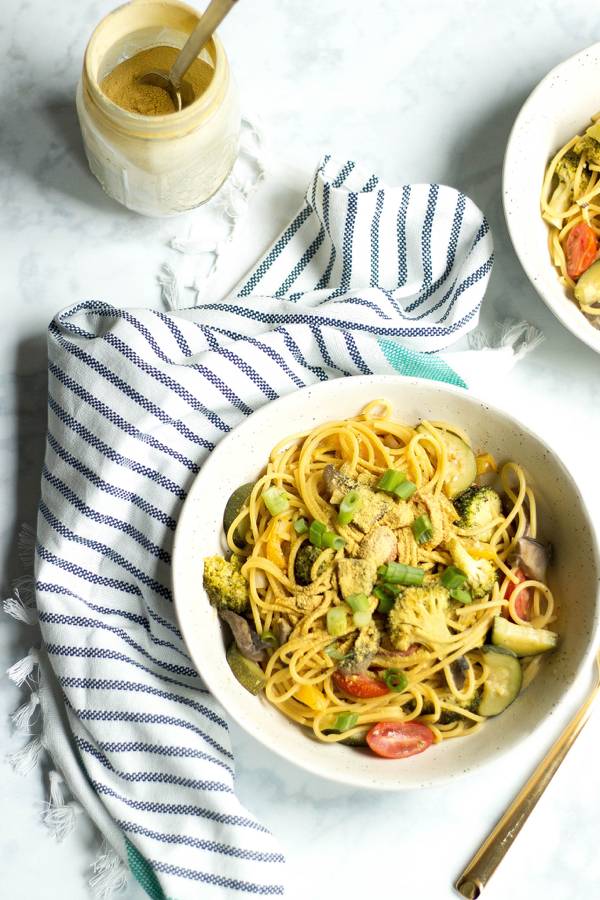 I can’t think of a more quintessential vegan comfort food dish than Heather’s lemony garlic pasta with nooch and veggies (well, OK, I probably can, but this kind of meal would be high on the list).

I used to eat spaghetti with nooch all the time when I first went vegan. Heather’s lovely pasta is a more nutritious and colorful spin on what remains a super comforting combination for me. 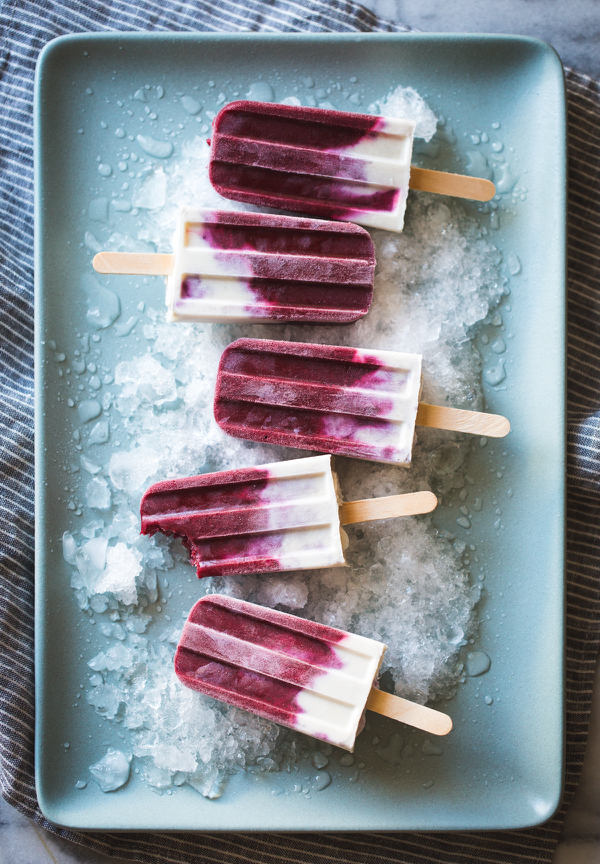 Finally, I’m craving Alana’s beautiful blackberry maple cream popsicles, which are totally vegan and feature a maple cashew cream base. It’s nice to see a creamy vegan popsicle recipe that isn’t coconut based (I like coconut, but only in small amounts, and I tend to prefer the sweetness and neutral flavor of cashews), and the color contrast here is so pretty. Also, I tend to be a sucker for anything with maple flavor!

1. This is a really cool article, via NPR, on global interdependence in the food system. Many of us know that tomatoes, for example, didn’t original in Italy, in spite of how closely we associate Italian cuisine with tomato sauce and caprese salad.

Still, it can be hard for us to wrap our minds around the extent to which the foods we know and love have passed through multiple points of origin. A new study has endeavored to reveal the full extent of globalization in our food supply. Its findings show that more than two-thirds of the crops that underpin national diets originally came from somewhere else, and that somewhere else was often quite far indeed. The trend has accelerated exponentially in the past 50 years.

The article is worth checking out; you might surprised to explore the origin and primary regions of diversity for 151 different food crops. The authors of the study in question say that their findings are good evidence that we should acknowledge the interdependence of our food system, especially as threats of extreme weather continue to grow.

2. I really loved Carrie Armstrong’s reflections on lessons learned from having once endeavored–and succeeded–to be stickly thin. Armstrong isn’t the first writer to bravely advocate for inhabiting a healthful, well-nourished body, but I think she captures the hollowness of anorexia better than most:

Then I got poorly. Really quite poorly, for a long time. And one result of this was that I went down to weighing six stone.

I realised then, that really what happened when you became very thin, was just that your clothing became very small.

That you were cold, all the time.

That you woke up, covered in bruises from where your protruding bones met mattress springs.

That it didn’t make you anything, other than less than you were before.

That’s about the long and the short of it. For me, the essence of anorexia recovery is an acknowledgement that extreme thinness, far from amplifying our own importance, value, or worthiness, makes us smaller. Smaller in every way. To recover is to expand not only the physical shape, but also the scope of one’s life and potential.

3. A smart, succinct, and commonsense article by a registered dietitian on the trouble with low-carb dieting, especially when it’s coupled with increased exercise. Jae Berman argues that this pattern can not only trigger binges or excessive carb cravings in the long-term, but also that it can enhance stress, which can encourage the lowering of basal metabolic rate and retention of weight.

Of course, every body is different. Experience has suggested to me that people can feel particularly energetic or well with a variety of different macronutrient balances. This is reflected in dietary patterns and cultural eating styles around the world, some of which are naturally higher in fat and lower in carbs, or higher in complex carbs but lower in fat.

Some variance aside, however, we all need protein, fat, and carbohydrates to function and thrive, and I’ve seen primarily disastrous consequences among clients who have tried to dramatically slash carb intake (namely binge and purge cycles, but also low energy, irritability, hormone disruption, and weight gain). As Berman notes, “the body absolutely needs carbohydrates for survival and a healthy metabolism. Especially if you are exercising, carbohydrates are needed — they are the fuel to assist our metabolism, feed our brain and manage our stress hormones.”

4. An interesting article on the marketing of “manly” food to men and teen boys. Not surprisingly, “man food” often includes excessive portions and plenty of meat (I couldn’t help but think of Carol J. Adams as I was reading). Author David Sax writes,

Manly food ads present a cleverly crafted challenge to our manhood: Are you man enough to eat this shit?

And shit it is. Manly food, as opposed to equally patronizing “lady food” (diet sodas, low-calorie cereals, herbal teas), are pretty much universally unhealthy. Huge quantities of processed, salty meats, wrapped in refined carbohydrates, saturated in chemical cheese goos, and fortified with colored sugar water. Are you man enough to get a colonoscopy? Because that’s what’ll happen if you buy into this crap…

…[T]he consequences of this kind of marketing are real. Men suffer from heart attacks and fatal coronary heart disease at twice the levels women do, and obesity rates tend to be considerably higher for men as well.

It’s worth noting that heart disease and obesity rates are climbing for women these days, especially in minority communities, and food marketing to women can be equally insidious. Still, Sax is right to point out that the presentation of junk food as a “challenge” to men’s sense of virility is both ridiculous and damaging.

5. Finally, a humorously written, yet serious article on how to support an anxious partner while also taking care of yourself. As an anxious person whose anxious tendencies keeping growing as I get older, I appreciated author Kat Kinsman’s tips, especially these two:

Don’t try to fix them.

You’re this person’s husband, wife, boyfriend, girlfriend, lover, polyamorous partner, not their therapist. (And if you are, stop dating them immediately because that’s creepy and unethical.) They cannot be well for you. It’s unfair to pressure someone to live up to your idea of how they should be, and they may end up feeling like they failed you. It makes your love conditional. Instead, just let them know that you’d like them to feel better because you love them — not because they have to be well in order to be loved.

Be OK with the fact that happiness looks different for different people.

For some, it’s balloons, dancing, party hats or Jaeger bombs at the club. Others, an Instagram snapshot with toes in sand or Deepak Chopra drawn in latte foam. (#bliss #bestlife #blessed) For an anxious person, it might be a day that passes without a panic attack or having to pound down Tums. It might just be having the wherewithal to get dressed and walk around the block. Calm is a terribly underrated emotion, but it’s just as valid as joy.

Both of these ideas resonate with me. It’s terrible to feel, when you’re stuck in the muck of anxiety or depression, that your experience is making you a less desirable or worthy lover, partner, or friend. Being pushed to slough off the feelings in order to meet someone else’s expectations of normalcy or happiness is never helpful, never a true means of resolution.

And yes, calmness, equanimity, the feeling spaciousness–these can be underrated emotions, but for many of us, they are as important and precious as celebration or jubilation.

OK, everyone, I’m off for today. I wish you a happy Sunday–whatever that means to you–and I’ll be back this week with some new recipes.

Good morning, friends, and happy Sunday. It’s hard to believe that August is already here. I’m fighting the urge to start fretting–as I do nearly every summer–about all of the summery things I haven’t yet done: the outdoor concerts I haven’t seen, the picnic lunches I haven’t eaten, the languid hours of reading on sunny benches that haven’t happened. It’s so easy to idealize summertime, to envision it as a series of postcard-perfect snapshots. Of course, the truth is that summer holds no…

Happy Sunday, friends! I finished up my clinicals on Friday, and life is good. I’ve also got the cold/malaise situation that I typically develop at the end of a busy semester, so I’m taking this afternoon off to rest and drink tea. While I’ve been too tired to do much, I haven’t been too tired to bake, and I’ve got a delicious new snack cake recipe coming to you tomorrow—and some great article links for next weekend. For today, so much love. xo