Last weekend I finally watched The Great British Baking Show. The inevitable happened: several days of non-stop biscuits, pies, pastries, cakes, eclairs, petit fours, and so on. I’m forcing myself to watch slowly now, so that a) I can actually get other things done and b) I don’t make my way through the whole series all at once. But it’s hard not to inhale it.

Part of the reason I started watching the show wasn’t just its popularity or the fact that I love to bake; it was reading this article. It discusses how the show captures the importance of having a hobby or a craft in which one can become pleasurably immersed.

The show’s ability to inspire deep devotion in its fan base has been much discussed. But less frequently remarked-upon is the way it showcases the joy of flow—and inspires viewers to dedicate themselves to their own hobbies, just for the fun of it.

Psychologist Mihaly Csikszentmihalyi, who studies happiness and creativity, developed the idea of “flow” to describe the ecstatic state of deep concentration that occurs when we are truly and deeply engaged by a task. We’ve all felt it, whether while determinedly assembling IKEA furniture, delving into an absorbing project at work, or learning new choreography in a dance class. When you become so immersed in what you’re doing that you barely notice the passage of time, that’s flow.

I think most anyone who loves cooking has experienced “flow” in the context of preparing a recipe or a meal. I tend to feel it not when I’m whipping up something routinely for supper, but when I’ve settled into a heftier cooking project: something that I know will take some time and patience and attention, something I can sink my teeth into, so to speak, over the course of hours. The article notes that more challenging projects can unlock the sense of serenity that comes from giving oneself over to a task:

If you want to re-discover the flow in your favorite pastime or incorporate it into your work, it’s a good idea to come up with new ways to stretch your skills . . . That’s why the skilled amateurs on the GBBO seem so absorbed as they grapple with the technical challenge of making a smooth dome of marzipan or create a show-stopping lion made entirely of bread. At some point, every contestant is going to be in over their head, and that’s the real fun of it—not because they face the prospect of failure, but because they’re taking their abilities to a whole new level.

Baking has become dear to me this spring and summer. At first it gave me something to do during my breakup, when I didn’t know what else to do. (It also gave me sweets and bread, which were comforting.)

But baking has come to be much more than a source of distraction: it’s an ongoing exercise in greeting challenges with a sense of pleasure and calm. My response to a perceived “challenge” has always been competitive and a little tense, but these days, as I practice with pie and pastry and bread, I’m discovering what it’s like to embark on a complex project without too much attachment to the outcome. The more I do it, the less likely I am to get overly flustered or testy when something doesn’t turn out right, which happens all the time. What matters is the hours I spend trying to puzzle through the process.

Part of the joy of this hobby is the fact that, even though I spend a lot of time working with food, baked goods aren’t primarily the type of food I create for the blog or for my nutrition clients. I like to share some of what I make, but for now, baking is mostly just a pastime. The Quartz article notes that professionalizing any passion can interrupt the “flow” that is so rewarding, not because there’s compensation involved, but rather because the expertise one acquires can actually dampen that crucial interplay of new challenge, puzzle-solving, and gradual mastery.

I’ve no idea what kind of baker I’ll become, but for now, even basic challenges are giving me deep satisfaction. I finally made a successful a vegan galette; for years I’d read about how they’re the simpler and easier alternative to pie, but for some reason I couldn’t get them right. It was such a happy moment when I finally baked one that was appropriately rustic and messy without being an actual mess. I’m still working through my friend Alexandra’s wonderful book, Bread Toast Crumbs, which is teaching me everything I need to know about no-knead breads, but I’m branching out into kneading and shaping, too. Maybe I’ll even get started with sourdough soon.

These projects have given me joy and peace during an otherwise turbulent few months. And in spite of the fact that I see baking as a hobby, rather than a professional skill, the learning process is definitely making me a better cook. If nothing else, it’s teaching me to be patient and relaxed. It’s reminding me that even “failed” experiments are good practice.

In some ways, embracing this hobby feels like a return to myself, rather than a fresh departure. I grew up loving anything crafty: as a kid, I knitted, crocheted, painted, drew, and sewed. I lost touch with these crafts as I grew up, gradually replacing them with more “productive” activities, like extra studying or extracurriculars that would help to set me up for the college application process. The more of a perfectionist I became, the less interest I had in nurturing pastimes that didn’t directly serve a goal. It’s a shame, because I see now that these crafts had much to offer me, not in spite of their separateness from my academic or professional life, but actually because of it.

I hope the Quartz article sparks recognition of the hobbies and crafts that give you all joy, satisfaction, and flow. And I hope you’ll enjoy the other reads. First, though, some recipes to check out this week. 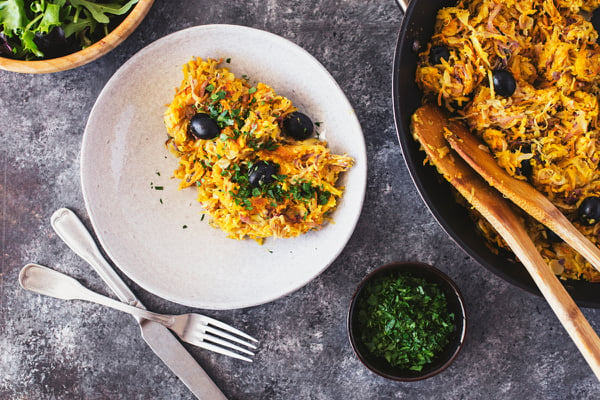 I love this simple Portugese potato breakfast hash from Cocoon Cooks, which is seasoned with turmeric and black olives. A great savory dish for weekend brunching or even a weeknight supper. 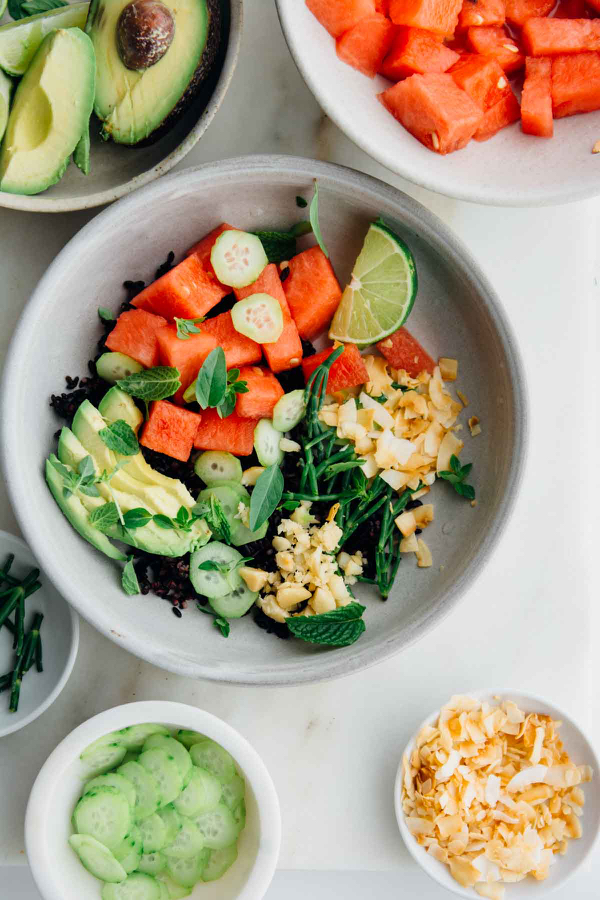 I haven’t tried watermelon poke yet, but I think it’s such a creative and fun idea. Tina seasons hers with a spicy coconut dressing and then pairs it with forbidden rice, crisp cucumber, fresh herbs, and flaked coconut in a super creative and colorful bowl. 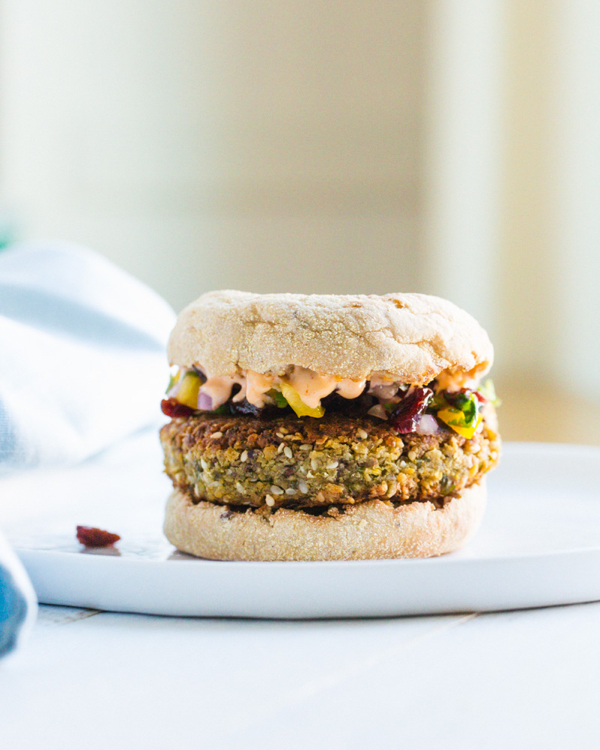 I could definitely afford to put some spark into my veggie burger game, and Sonja’s cumin-scented chickpea and sesame burgers are inspiring me. She tops them with a tangy tart cherry and bell pepper salsa, along with a layer of spicy vegan mayo. Yum! 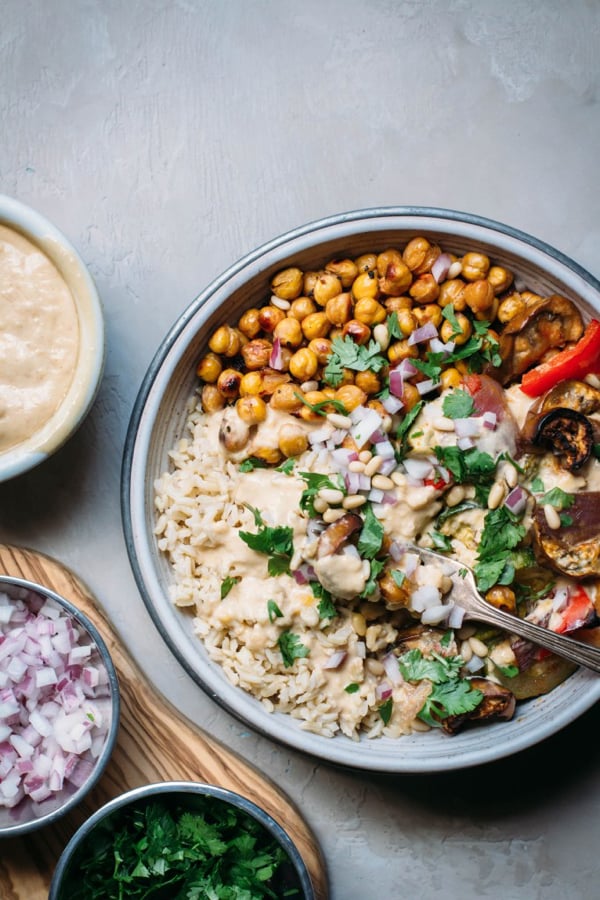 Here’s another recipe that uses seasonal fruit in a creative, savory recipe: Kimberly’s Moroccan spiced chickpea and veggie bowls with mango tahini sauce. I’ve tried blending and pairing tahini with just about everything, but mango is a new idea for me. These bowls look so hearty and flavorful. 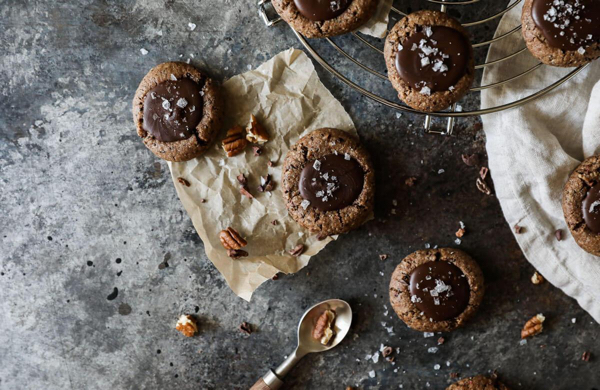 Dessert! (And more tahini.) Jessi’s chocolate tahini thumbprint cookies are no bake, which makes them perfect for hot summer days, and they feature an easy, 3-ingredient chocolate tahini fudge.

1. First, reflections on The Great British Bake Off and the pleasures of a hobby.

2. This consideration of hobbies has also got me thinking about the importance of maintaining a rich personal life, one that’s separate from professional identity. Toni Morrison’s reflections on work really struck me. She shares some lessons her father taught her about work, recalling a conversation in which she confessed to him that she was struggling to cope with a particularly demanding boss:

That was what he said. This was what I heard:

1. Whatever the work is, do it well—not for the boss but for yourself.

3. Your real life is with us, your family.

4. You are not the work you do; you are the person you are.

I have worked for all sorts of people since then, geniuses and morons, quick-witted and dull, bighearted and narrow. I’ve had many kinds of jobs, but since that conversation with my father I have never considered the level of labor to be the measure of myself, and I have never placed the security of a job above the value of home.

There is so much to be said for crafting a profession that feels like a vocation, something meaningful and personally rewarding. But Morrison’s words ring true to me, too: no matter how much you love what you do, you are not your work—or, you are not only your work.

3. A reader sent this article to me a couple days ago, and I thought it was worth sharing. The author, a recovering bulimic, uses her healthcare experiences as a way to address how medical professionals often lack adequate communication skills and training when treating patients who have (or have histories of) EDs/disordered eating.

One important point she makes is that callous brushes with doctors can actually reinforce the isolation and resistance to seeking help that so many patients with EDs already struggle with. It’s a good read, and I was happy to hear that more ED specialists are advocating for general practitioners to be given training in this area.

4. Melissa Blake’s beautiful reflection on how her father helped her both to live with a genetic condition (she was born with Freeman-Sheldon Syndrome, a rare genetic bone and muscular disorder) and also to maintain, nurture, and find strength in an identity that is separate from her medical past.

5. Ed Hess considers how artificial intelligence may actually shift our definition of human intelligence, encouraging us to embrace “a new definition of being smart, one that promotes higher levels of human thinking and emotional engagement.”

Enjoy these links, friends, and I’ll be back around this week with a fresh summer salad and a tasty vegan treat.

Another week, and I’m finally getting the swing of things here. The apartment is looking good, and I’m catching up on my nutrition counseling and signing on a lot of new clients, and life is falling into place. Moving week eats aside, I can’t wait to share a little more food here on CR. So, that’s coming soon. In the meantime, you can savor food from some of my foodie friends. Heaven in a mason jar: Allyson’s roasted strawberry and vanilla almond parfaits….