Happy Sunday! I’m keeping this weekend reading post short and sweet, so that I can spend some time with a dear college friend who’s visiting from the west coast today. Here’s what I’ve been reading and gazing at this week. 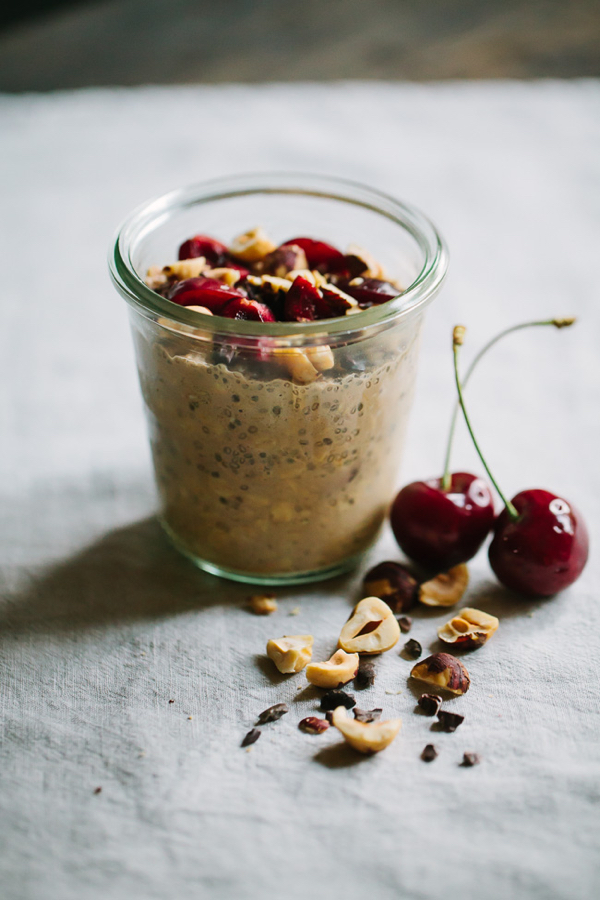 I love pretty much everything about Emily’s cocoa hazelnut overnight oats with sweet cherries, but I’m particularly intrigued by the homemade cocoa hazelnut milk itself. I’ve made hazelnut milk in the past and really enjoyed the results, and I feel sure I’d love it with chocolate! 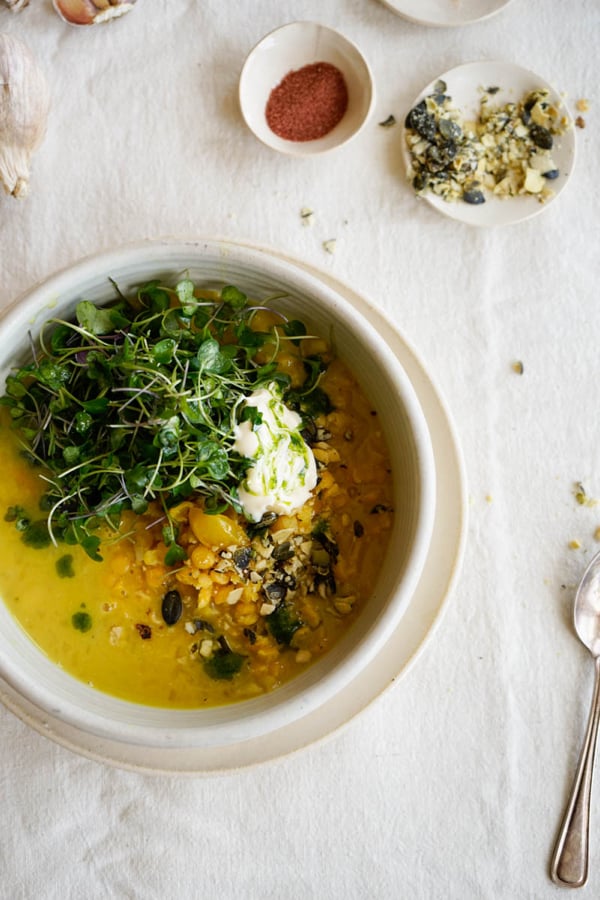 I can always count on Heidi for the most nourishing, hearty, and healing soup/stew recipes. Her latest creation is this beautiful, golden bowl of coconut yellow split pea soup. I sort of fell in love with yellow split peas this past year–they’re so versatile, not to mention cheap and nutritious–and this may have to be the next recipe that I try them in. 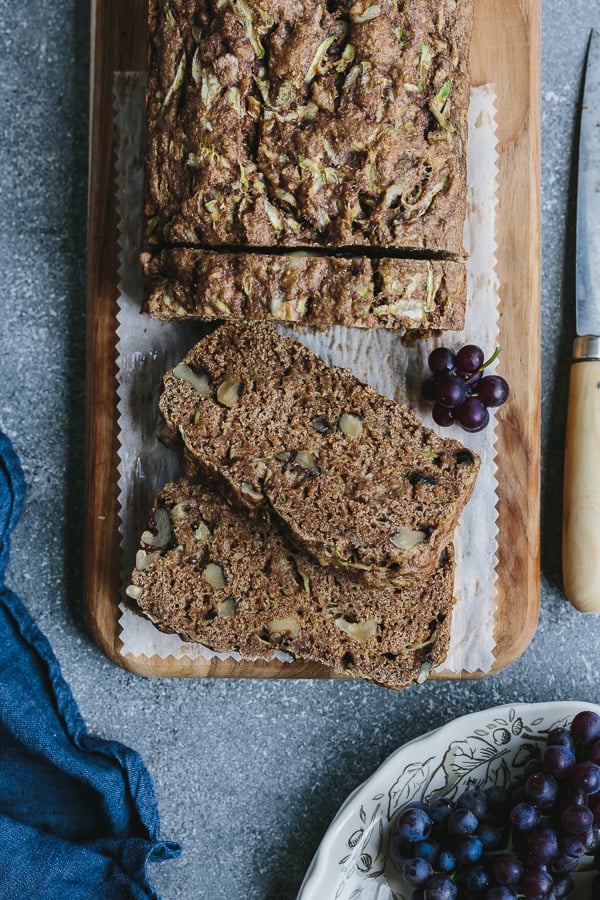 Do you have a garden or a local farmer’s market that’s teeming with zucchini? Then I suggest trying Aysegul’s delicious vegan zucchini and walnut bread. Can’t wait to bake a loaf (and then enjoy it, slice by slice, with coffee.) 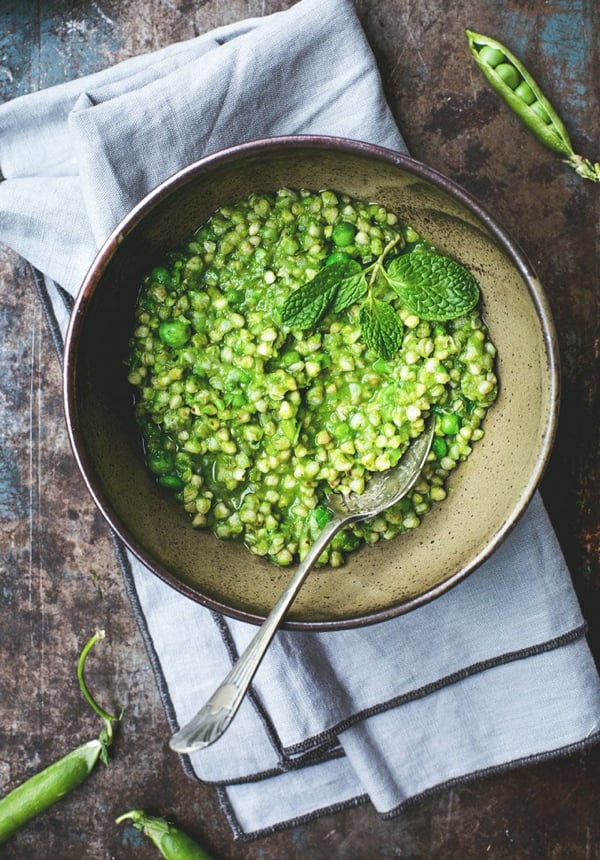 I love cooking with buckwheat, but I don’t tend to get very creative with it (usually, it ends up in granola or in a parfait).

So, I love the idea of Amanda’s savory green pea and buckwheat risotto. It’s a simple recipe, which I imagine allows the sweetness and verdant flavor of the peas to shine through. 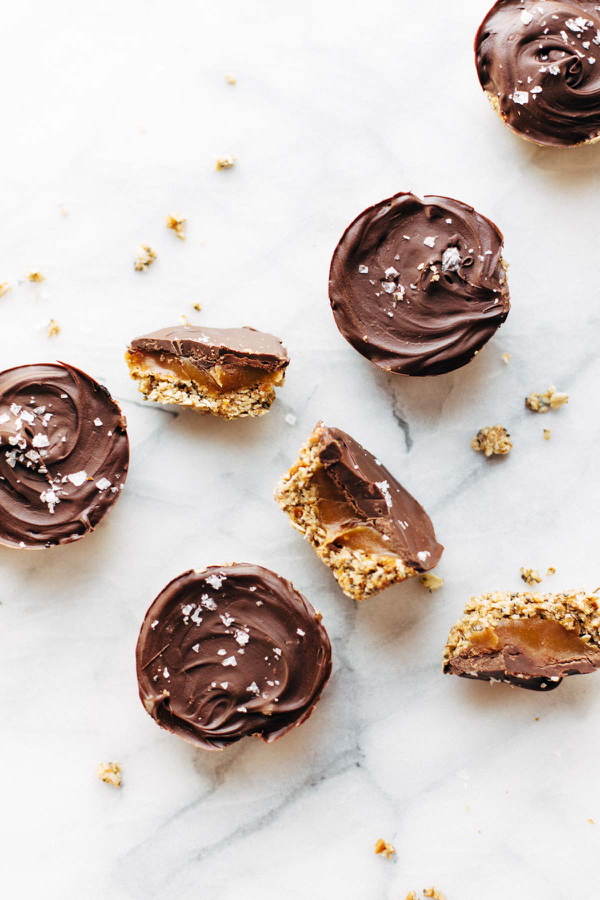 For dessert, I’m totally smitten with Lindsay’s no bake salted caramel cups. I can’t resist the chocolate + sea salt combination, and I’m totally going to try them with a thicker version of my date caramel sauce.

1. First up, I found this profile of Merlin Sheldrake, a researcher in England who specializes in the relationship between trees and fungi, to be fascinating. Historically it has been thought that fungi pose a risk to trees, but Sheldrake is actually elucidating complex, symbiotic relationships in which fungi and trees aid each other. Taken together, networks of trees, plants, and the fungi that support their survival are being called the “Wood Wide Web.”

As I was reading the article, I couldn’t help but be reminded of the human microbiome! We often study biological organisms in isolation, but in so doing we fail to grasp the extent to which nature always creates, and resides in, webs of relationships.

2. Bon Appetit magazine recently dipped its toes into the world of vegan ice cream making, and it reported on its findings. Much of what’s said won’t come as a surprise to seasoned vegan ice cream makers, but it’s always cool to see coverage of a vegan cooking technique in mainstream culinary press!

3. An interesting profile of Daniel Kish, a blind man who uses echolocation (also employed by marine mammals) to see. Kish is advocating for wider use of the technique in the blind community, in spite of the fact that his methods are being greeted with ambivalence and controversy.

4. A physicist gives a raw, moving account of the challenges she’s faced not only as a woman in the sciences, but also as a Chinese immigrant who has pursued higher education in the US. Her brushes with sexism enraged me, and they may enrage you too, but her narrative is courageous and inspiring.

5. A friend of mine sent me Jamie Varon’s smart, sensitive, and deeply wise meditation on the feeling of “falling behind,” and it resonated immediately.

Yes, the essay is about fear of falling behind, that insidious and nagging sensation that tells us to do more, produce more, move up, move faster. But it’s a deceptively complex piece of writing, I think, and there’s more here than the title suggests. What Varon is really getting at is the suggestion that life can only be lived in the present:

We act as if we can read enough articles and enough little Pinterest quotes and suddenly the little switch in our brain will put us into action. But, honestly, here’s the thing that nobody really talks about when it comes to success and motivation and willpower and goals and productivity and all those little buzzwords that have come into popularity: you are as you are until you’re not. You change when you want to change. You put your ideas into action in the timing that is best. That’s just how it happens…

You don’t get to game the system of your life. You just don’t. You don’t get to control every outcome and aspect as a way to never give in to the uncertainty and unpredictability of something that’s beyond what you understand. It’s the basis of presence: to show up as you are in this moment and let that be enough.

You are as you are until you’re not.

It is the truest of statements, and it’s one that I wrestle with every single day. I’ve hardly been liberated from my tendencies toward grasping and control, but in the past few months I’ve taken tiny, gradual steps toward what my friend called “giving myself permission to just be.” It has been a fascinating and difficult process, and there’s so much more to say about it, but I don’t have anything to say this evening that Varon’s article doesn’t say perfectly already.

On that note, friends, I wish you a great evening.

Happy Saturday! And thank you for all of the wonderfully supportive comments about the name change of this site. I was definitely feeling some jitters before the announcement, but everyone has been so kind and so cool. If you’re still not getting redirected to The Full Helping, try clearing the cache or temporary files on your computer and iPhone. And if that doesn’t work, feel free to shoot me an email (gena@thefullhelping.com) or track me down on social media to let me know!…