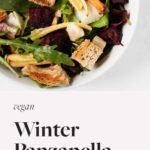 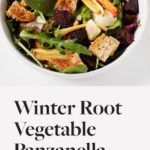 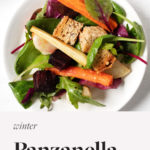 I’ve always loved the idea of panzanella salad. It combines two of my favorite things: salad and bread!

I tend to think of panzanella as being a summer dish. And traditionally, it is. It’s usually made with juicy tomatoes, and often with cucumber and basil as well.

I’ve made many summery panzanellas, some more traditional than others. My cornbread panzanella features the traditional tomatoes and cucumbers. But the bread is cornbread, not sourdough or peasant bread, which gives the salad an especially hearty texture.

But, as this winter panzanella salad demonstrates, greens and bread go beautifully with all sorts of seasonal produce.

This is the ultimate winter panzanella, a hearty mixture of sweet and savory roasted root veggies, peppery greens, a creamy roasted shallot vinaigrette, and those characteristic bites of bread.

I change up my meal-sized salad routine in the winter months. My favorite dressings and flavor combinations are often the same. However, I’m more likely to build a salad around grains and root vegetables than I would be in the summer, when I put produce at front and center.

I didn’t used to eat with the seasons as closely as I do now. But I’ve been trying to align my food choices with the rhythm of the season more and more. It allows me to support local agriculture, and it feels good to (and tastes better) to eat what’s fresh.

This winter panzanella salad is proof that winter produce, in spite of being limited, is loaded with goodness. It uses:

I recommend using a peppery or spicy green for the salad if you can. A green with personality, like arugula, mizuna, or baby kale, can stand up to the root veggies and the flavorful shallot dressing. For something milder, mache would also be nice, too.

The root vegetables add not only flavor and nutrition, but also heft. They’re more filling than cucumbers and tomatoes, which makes this salad appropriate for winter (and the comfort food cravings that it brings).

I chose my favorite root vegetables for this dish: parsnips, rutabaga (which I love), carrots, and golden beets. You can swap any one of these with sweet potato, turnip, celery root, or sunchokes. Mix it up, incorporate color, and be creative!

The creamy shallot dressing in this winter panzanella salads has become one of my favorite dressings. With or without the salad I created it for!

To save some time, you roast the shallots that go into the dressing along with all of the roots. Once the vegetables are ready, pull the shallots off of the roasting pan and blend them with remaining dressing ingredients.

If you don’t have shallots at home, you could roast a whole head of garlic while the vegetables are in the oven. Then, you could replace the shallots with garlic (it’ll be similar to the garlicky dressing in this three bean salad).

The creamy roasted shallot dressing will be great on all sorts of other salads, too. I’d love to try it on my festive kale salad with cranberries, lentils, and coconut bacon, my red quinoa salad with hazelnuts, fennel, and baked tofu, or my roasted carrot and avocado salad.

The dressing can be made up to three or even four days ahead of mixing the salad. It keeps for up to five days in an airtight container in the fridge!

Honestly? I think the best bread for this winter panzanella salad is a bread you really love.

I love a peasant bread or pain au levain/sourdough in this salad. I’ve also made it with toasted ciabatta, a whole grain miche, and a Tuscan round.

But really, the point of panzanella is to use up bread that’s just going stale. So, you can and should use what needs eating! I like using up the butts of my classic sandwich bread and multigrain bread. 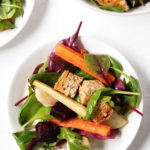 Leftover salad will keep overnight in an airtight container in the fridge.

I recently read that this is the “sad” time of year for cooking. This sentiment makes sense, of course. Winter can’t compare to the lush summer months and farmer’s markets bursting with fresh fruit and vegetables.

But I love winter from a culinary standpoint: the embrace of comfort food, the ingenuity of pantry cooking, and the abundance of root veggies. This salad is a perfect way to celebrate winter’s bounty. And as far as salads go, it’s a really satisfying one to eat.

I hope you’ll enjoy it, too!