Hope you’re all having a good weekend! And that you enjoyed Sarah’s super awesome post. 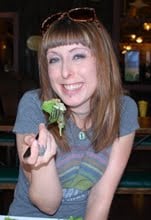 Prepare yourselves, readers, for a culinary treat. In honor of my travels through the dirty South this weekend, I thought I might ask to hear from another one of my very favorite bloggers: Ms. Bianca of Vegan Crunk. Bianca’s blog has been on my must-read list for just about as long as I’ve read food blogs. Why? Because she’s sassy, smart, committed to veganism, and a damn tasty chef. Bianca and I may have slightly different palates — among other things, she’s a whiz with spicy cajun fare, whereas I’m all about the simple, un-spicy flavors — but we share a love of the veggie-full lifestyle.

We also share a love of raw! Bianca has been practicing a “raw Tuesday” tradition for a year or so now. On the first Tuesday of every month, she eats all raw — sounds a lot like Raw Wednesdays, eh guys? Great minds…

What I love about this is that Bianca is living proof that one can dabble in raw foods — even just once a month — without getting subsumed in stress about going 100%. She experiences the fun and good vibes of a raw diet, but she does so on her own terms, and — as you’ll see — according to her own tastes. Without further ado, Ms. Bianca!


Hey ya’ll! Bianca here from Vegan Crunk. Gena kindly asked me to do a guest post about my long-standing monthly tradition of raw food cleansing on the first Tuesday of every month. So here goes …

First, let me introduce myself. I was born and raised in the Mississippi Delta — land of barbecued pork, ham hocks, and fried chicken. Thankfully, I gave up all that nastiness and went lacto-ovo vegetarian by age 14. By 24, I was vegan, and last year, I began dabbling into raw foods. However, I still love fried tofu, cupcakes, and vegan donuts. And at this point in my life, I couldn’t even fathom giving up junk food.

But in February 2008, I began experimenting with a once-a-month raw food cleanse. The idea of a monthly one-day “fast” came from Skinny Bitch, a book I credit with totally changing my life. Since I only eat all raw one day a month, I don’t know how much cleansing is really taking place. But it’s an amazing exercise in self-discipline and a perfect excuse to play with raw recipes. Raw food is tasty, and it makes you feel great about yourself and what you’re putting into your body.

I began my monthly tradition with only two raw un-cookbooks in my collection — Alive in 5: Gourmet Meals in Five Minutes by Angela Elliott and Raw Food Made Easy by Jennifer Cornbleet. My first raw dinner in that February 2008 cleanse were these tasty Garden Wraps from Cornbleet’s book: 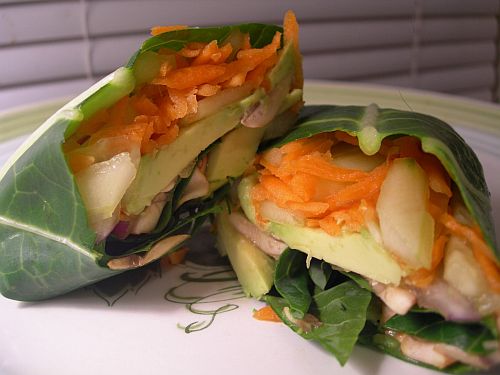 I discovered pretty quickly that I wasn’t really into raw collards. However, a few raw food days later, I did learn that I LOVE raw desserts! These Raw Brownies (also from Cornbleet’s) book have been one of my favorite raw desserts to date (with the exception of Gena’s amazing banana soft serve of course!): 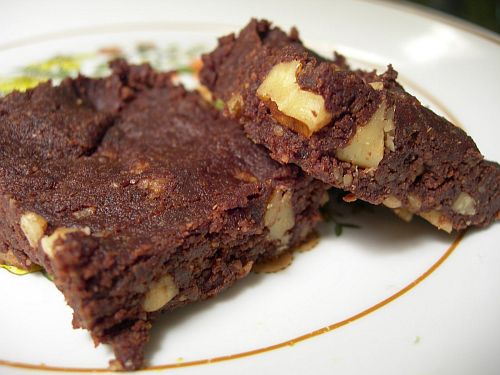 These were made with a base of walnuts and cocoa powder (mine wasn’t raw, but they would be even better with raw cacao powder). And they froze wonderfully, so I snacked on this batch for months!

Unlike on my normal cooked food days, I tend get hungry every couple of hours when I’m eating all raw food. But I’ve learned that eating a meal heavy on the nuts and seeds helps curb the hunger cravings. Of course, I don’t go overboard on nuts for every meal. But this breakfast of Raw Spanish Scramble from Ani’s Raw Food Kitchen satisfied well until the noon hour: 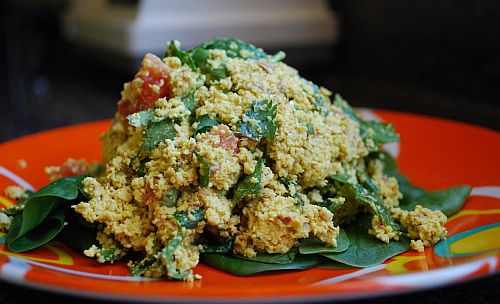 Over the past year, I’ve relied mostly on Ani’s book, the Cornbleet and Elliott books mentioned earlier, and of course, the lovely Gena’s recipes from this very blog (see her recipe tab above). Gena’s cashew alfredo, raw tortilla soup, and creamy avocado bisque are TO DIE FOR!!!! Occasionally, I’ll branch out and seek raw recipes online from unknown sources. This recipe for Raw Mashed “Potatoes” is one of those, but I’ve made a few adaptations of my own: 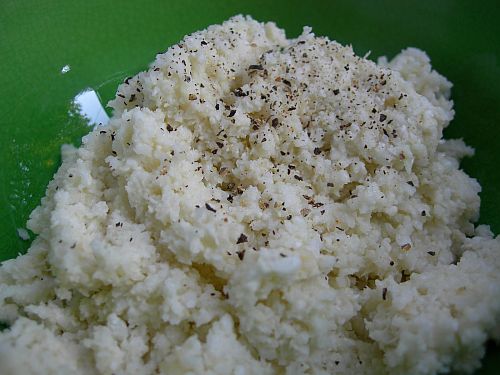 Blend the cashews in a food processor. Add cauliflower and blend until it forms course crumbs. Add the olive oil and garlic and blend again until combined. Add salt and pepper to taste.

I hope Bianca’s post shows you all that you don’t have to make eating raw an all or nothing thing. You can set the terms of what you hope to get from a raw diet — be it lifelong or purely experimental and curiosity-driven. And I hope you all try Bianca’s recipe! I happen to have a similar mashed potato recipe to unveil, but you guys will have to wait a bit for that!

Sending you all my love from the Big Easy.