Spontaneity has never been my strong suit. I’ve always admired it from afar, nodding my head approvingly at the idea of carpe diem, going with the flow, and all of that. But acknowledging its value and actually welcoming it into my life are two very different things.

I know that my resistance to spontaneity has to do with my attachment to control, or the idea of it, which is something I’m trying to let go of. It’s not easy to let go of things, though, when letting go is often more uncomfortable than not. When I try to be more spontaneous or to roll with the punches I usually end up feeling destabilized and off-kilter, which doesn’t encourage me to do it more often.

Sometimes being freewheeling with my schedule and saying yes to things at the last minute means that I lose time for the actions and routines that keep me grounded and healthy: yoga, cooking, moving at a steady pace, consciously creating solo time if I’ve been around people a lot. It’s taken me a while to figure out how important these things are to my overall well-being, so of course I work hard to preserve them. But I know that there’s a fine line between protecting my nourishing habits and clinging to routine. And the more set in my habits I allow myself to be, the more convinced I become that I can’t handle changing them—a sense of fragility that I neither want nor need.

This week, I played around with being spontaneous—not intentionally, but because chances to do it came up. On Wednesday, a friend ended up with a gap in his work schedule and asked me whether I’d like to meet up for a while. I’d had a long morning of cooking and was immediately inclined to say no, but when I tried to imagine how it would be to sit down and catch up with him, I realized how much I wanted to say yes. I did said yes, in spite of being a little worn out, and our time was really energizing. I was glad he asked, and I thanked him for doing it.

On Friday, I realized that the plans I thought I’d committed to for Sunday were in fact happening on Saturday. As soon as I realized my error, I wanted to bail, because the day had taken shape in my mind already. Once again, I thought about what saying yes would feel like, and it was a positive enough visualization that I could push through the discomfort of the unanticipated changes in timing.

As it turned out, most of my Saturday shifted around under my feet; the day I thought I’d be having isn’t a bit like the one I had. But the one I had was fun and rich and sweet, and it’s very possible that the Saturday I’d initially counted on would have been less so. Or at least, it wouldn’t have been this Saturday, with the experiences it contained. So I’m happy I gave myself over to the flow of things, rather than tensing up against the unanticipated.

Not long ago, I wrote about the importance of saying no, and I stand by those words. But it’s important for me to resist rigid thought patterns that coax me into thinking that, if one thing is true, something oppositional must be untrue. Saying no is the right choice for me sometimes. Saying yes is right sometimes, too. Siding with one at the expense of the other saves me the work of learning to carefully discern whether a “yes” or a “no” is right for me in any given moment, which is part of the greater work of learning to tune into my own needs and listen to my intuition. But that’s good work, work that wants doing.

Navigating the space between openness and boundaries isn’t a straightforward business, and as I keep trying I know that I’ll inevitably have some missteps. I’ll opt in to things that tire me out, or I’ll miss out on moments that might have been fun and rewarding.

That’s OK. Another tendency I’m working on these days is my tendency to be precious, to regard each moment as a one-shot deal. I’m constantly assuring my nutrition clients who a) have the privilege of steady food access and b) have a tendency create a lot of suffering around getting food choices “right” or “wrong” that no single meal is all that important; there will be others, lots of opportunity to make different choices. So too with connection and experience. There’s always another chance to practice, if we’re up for it.

Wishing you a week full of yes’s and no’s, as the case may be, and appreciation of them all. Here are my recipe picks and reads from the past week. 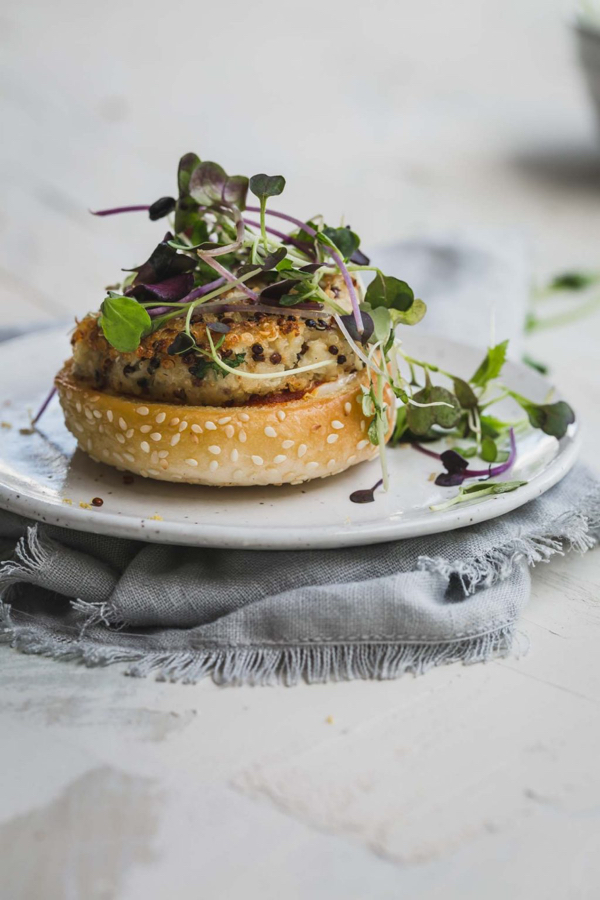 My friend Amanda just celebrated a burger month on her blog, with plenty of incredible recipes, and this crispy quinoa cauliflower burger is my favorite so far. 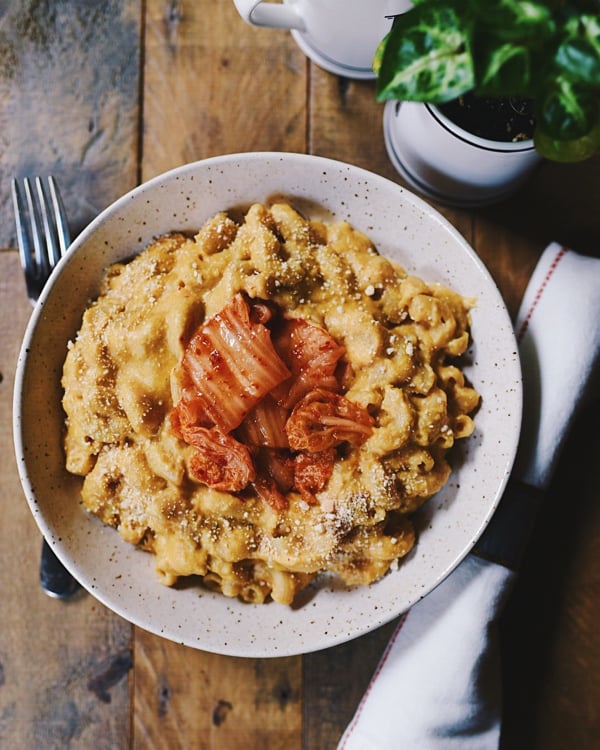 This vegan kimchi mac n’ cheese has been bookmarked for my next comfort food craving. So much cheesy and umami goodness! 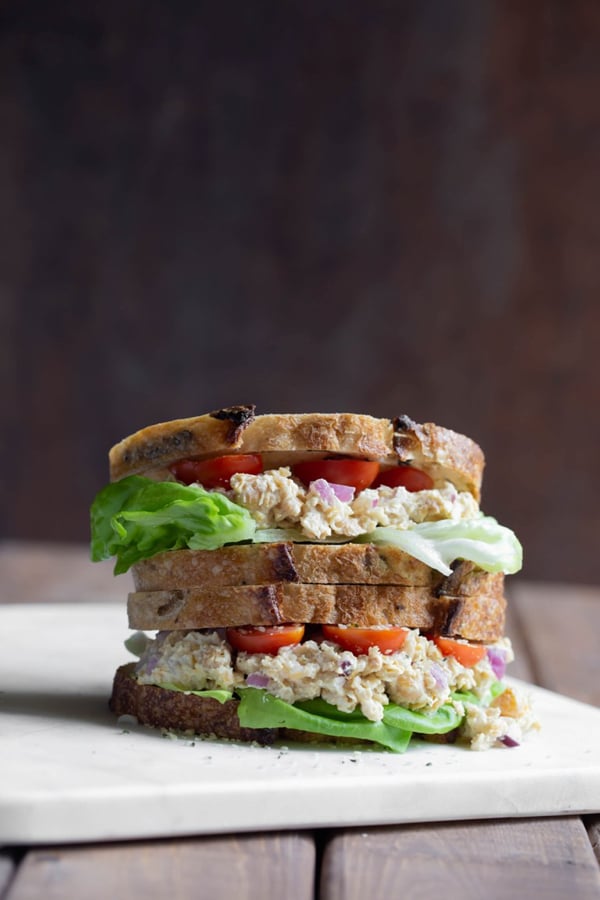 I can never get enough smashed chickpea salad recipes, and right now I’ve got my eyes on Brandi’s awesome caesar version. What a cool idea to use artichoke brine. 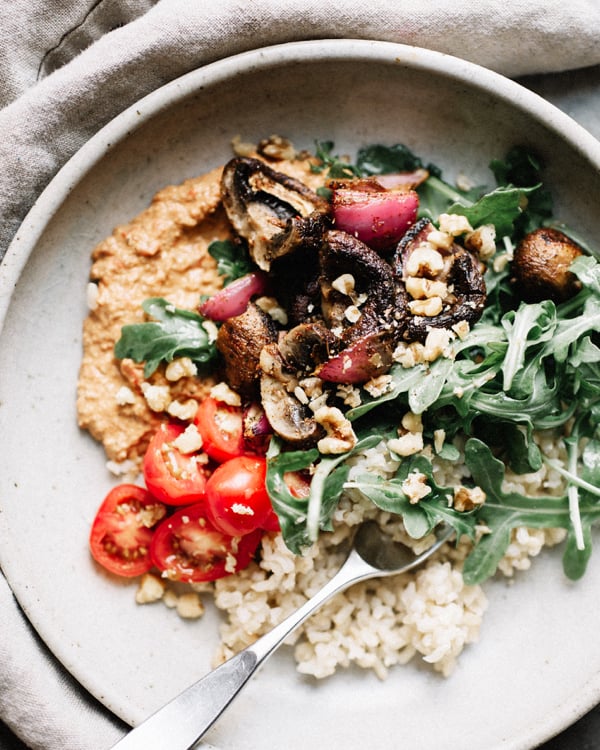 Sara’s beautiful grilled mushroom bowls with muhamarra are inspiring me to get my grill pan out for the first time this summer. 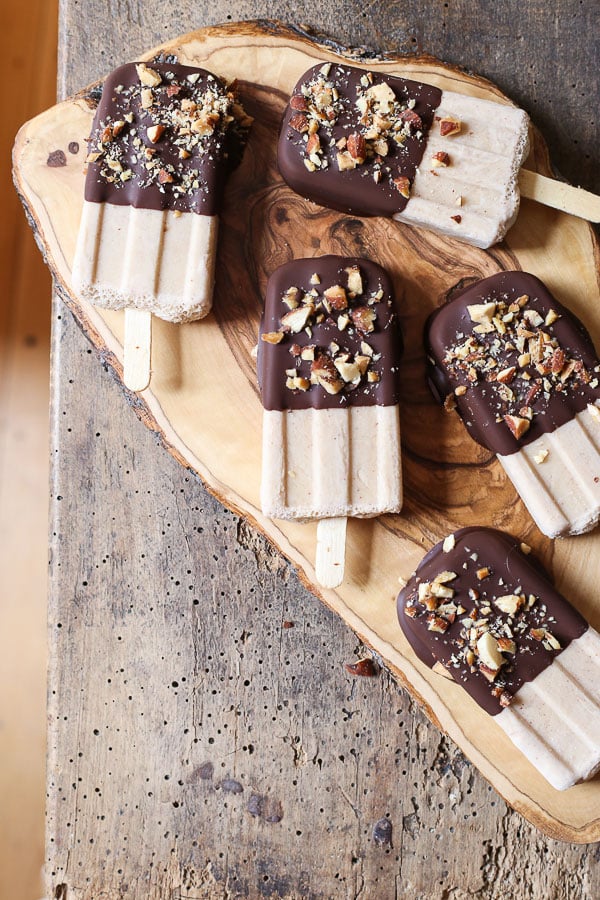 1. I loved reading Eric Kim’s tearjerker of an ode to the five cookbooks that have made him cry. Zahav is the only one I’ve read, but they’re all on my wish list now.

2. Speaking of my wish list, I’m eager to take a closer look at this list of 39 health and science titles for the summer.

3. A new research review points to the benefits of a plant-based diet for heart health.

4. I really like this article on raising vegan/vegetarian kids and teens—it’s both supportive and evidence-based, and the dietitians interviewed offer good tips and guidelines for parents.

5. This post was written for Mental Health Awareness Month, which is behind us, but I’m sharing it because I’m so glad that my friend Stepfanie had the guts to share about her experience with anxiety. I can intimately relate to the digging of nails into tender flesh to help distract oneself from racing thoughts or irrational fears—and I’m guessing I’m not the only one.

Each time any of us takes the time to put experience into words, we contribute to a culture in which mental health struggles can be acknowledged without stigma or shame. Thanks, Stepfanie.

My long day of cooking earlier this week was the most I’ve done in a long time; it’s a summer of hands-off meals for me, which feels totally alright. But I do have a new recipe to share this week, as well as some summer appetizer inspiration to chat about. Till then, take good care.

A week-long head cold wasn’t how I planned to begin 2019, but the nice thing about having some time off from the DI is that I’ve been able to absolutely nothing in the last few days, aside from drinking tea, answering emails from my phone, and catching up on television. In the past, I’ve been great at talking about the importance of rest and slowing down, very bad at actually doing those things without an overlay of guilt or nervousness about what isn’t…