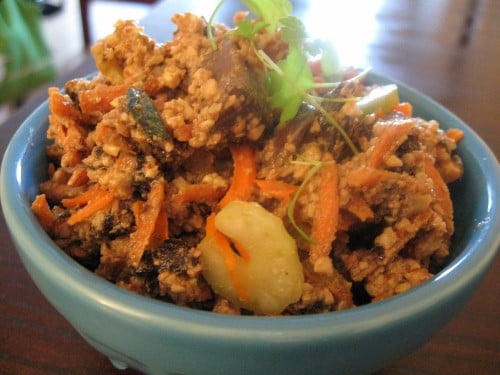 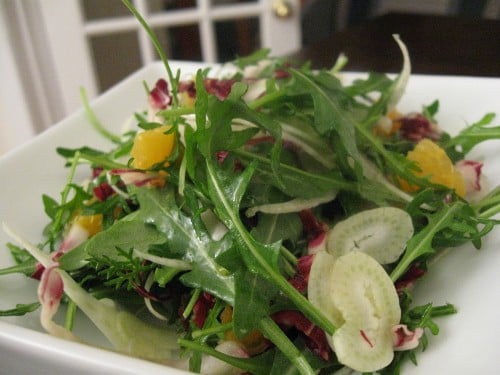 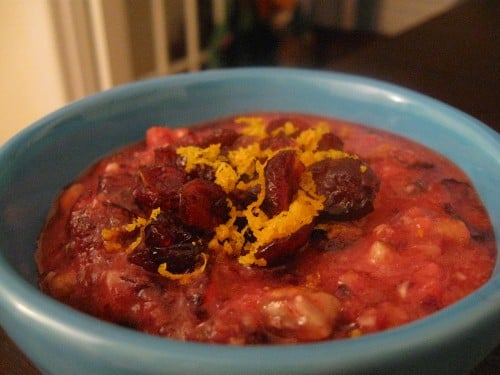 There’s nothing like an imminent holiday weekend to destroy one’s concentration. If today is any indication of my capacity for focus (it began with a half-terrifying, half-comical spill on the treadmill, and ended with my absentmindedly confusing vinegar and soy sauce in the kitchen), then Thanksgiving can’t come soon enough. What I have been able to focus on – finally! – is a high-raw, all vegan Thanksgiving menu for you to enjoy and share with loved ones!

As I was creating this menu (and the recipes on it) I had a few goals in mind:

•     Seasonal produce. From winter squash to fresh cranberries to carrots and celery from your local farmers’ market, it’s my hope that this menu showcases some of the best of seasonal flavors and tastes.

•   Familiarity. In my last post on Thanksgiving, I made clear that a positive attitude and open-minded approach is the best way to help your family adjust to the brave new world of vegan and raw dishes. There’s a culinary component to helping them adjust, too: make dishes that are familiar and comforting. This is not the occasion to experiment with a cacao-goji-avocado pudding, dusted with maca, or a nutloaf that you’re not certain won’t emerge from the dehydrator looking like a brick.

This is the day to make raw food that’s reminiscent of conventional dishes. And for you high-raw foodies out there, it’s a good day to experiment with an entrée or two that’s vegan and easy to digest, but not all raw. Bringing something warm to the table may actually help your family and friends gather up the courage to taste your other all-raw options; knowing that they aren’t limited to (read: forced into) eating raw will make them much more receptive to the idea.

To wit, a high-raw, all vegan, user friend Thanksgiving menu!

The menu includes two semi-raw recipes (the ravioli and, if you don’t have a high-speed blender, the soup) and one cooked recipe (the squash). The rest is raw.

I love this menu for its tastiness, of course, but what I love most about it is the fact that these recipes are simple and hassle-free. And since they feature familiar flavors (cinnamon and nutmeg; parsley, sage, rosemary and thyme) and textures (soup; mashed root veggies; dense and nutty stuffing) they’ll allow you to show the special people in your life that eating raw needn’t be a daring experience. Instead, it can be comforting and delicious.

With that, let’s get on to the recipes!

This is the perfect fall salad. The tart arugula and radicchio are balanced by the sweetness of fresh fennel and citrus, and the whole thing is brought together by a classic Dijon vinaigrette.

2 bunches fresh arugula (about 12 oz)
1 small head radicchio, chopped
1 medium head fennel, shaved thinly
1 large navel orange, supremed (ie, peel it, cut off the pith, and cut it into sections, being sure to remove all seeds)

Whisk all ingredients together until smooth.

Toss the vinaigrette over the salad, mix, and enjoy! 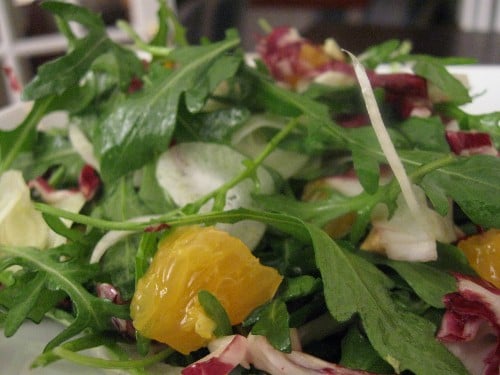 A few weeks ago, you guys saw these take a starring role in a dinner party. Here, they make terrific appetizers for any meal. 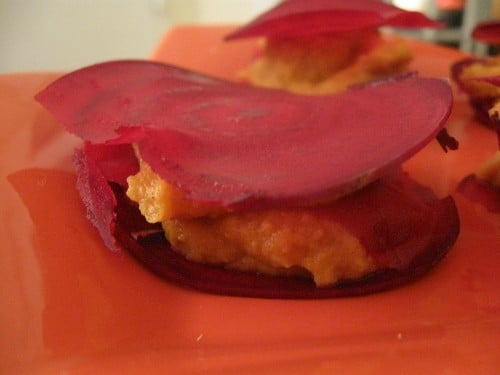 At least 2 cups of a simple root vegetable mash. I suggest:

Steam the root vegetables for about twenty or thirty minutes, or until very fork tender. Put them in a food processor with the remaining ingredients and blend till very rich and smooth – you may have to stop often to scrape the sides of the bowl.

Top each round of beet with about 1-2 tbsps of the warm veggie mash. Put another beet on top, and voila: a sweet, savory, and sumptuous half-raw pasta creation that will leave your guests smiling. 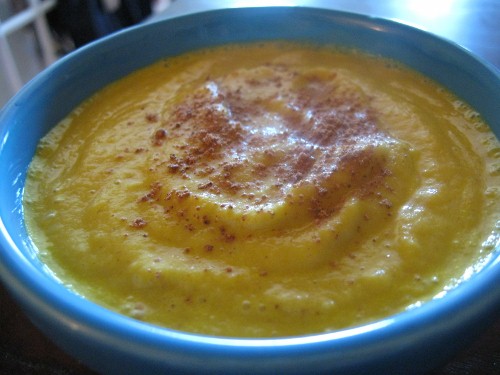 Another guest from my autumn dinner party menu, this is by far my favorite recipe of the last few months. Sweet and gently spiced, it only tastes decadent. Enjoy it for your dinner, or at any time of year!

Blend all in a high speed blender till smooth and creamy.

If you don’t have a high speed blender, raw squash will be tough to blend, so I recommend steaming the squash and celery very gently first. Then, blend away. You can serve it cool, or reheat on the stove post-blending. 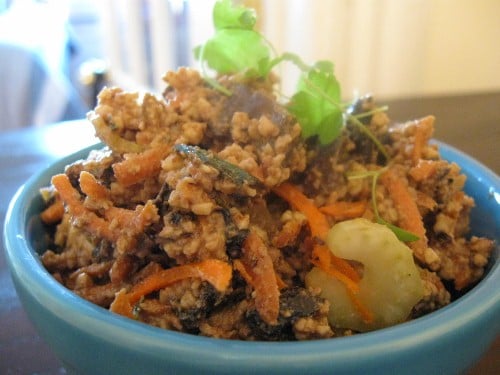 This recipe is far richer than my standard fare – it’s heavy on the nuts and oils that so many of you send me fretful emails about! But Thanksgiving is all about indulgence, and indulging on healthy, natural, straight-from-the-earth foods is the way to do it!

Though you won’t pull this stuffing piping-hot from the oven, you will find that the flavor profiles are reminiscent of the standard dish. It’s spiced with thyme and rosemary, and walnuts (ground up in the trusty food processor) help to make the dish cohere in place of bread. Finally, portobello mushrooms, celery, and carrots give the filling substance and texture – way better than the beef that used to lurk in my family’s recipe!

It’s best to marinate the mushrooms overnight, but 2-4 hours will do.

Next, blend in a food processor:

When the mixture has taken on a fine texture, add to it:

Pulse until it begins to come together, like a nut pate. Mix this with:

Add the mushrooms, using or reserving liquid depending on how “wet” you want the stuffing to be.

Add the chopped nuts and raisins to the stuffing, chopping in some additional parsley sprigs. 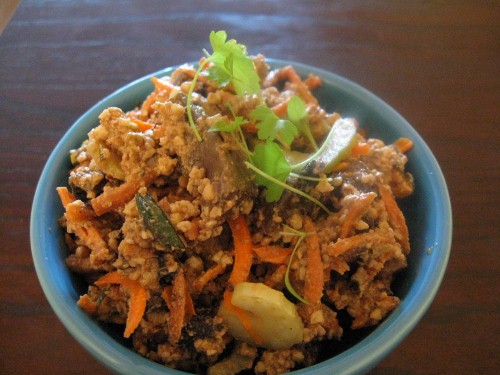 First, blend together the apple and orange juices, the cinnamon, the nutmeg, the allspice, the cloves, and the whole cranberries. When mixture is thick, taste for sweetness and adjust as you like.

At this point, you can simply serve the sauce as is! It’s delicious. Keep in mind, though, that this is very much a sauce – it’ll be smooth and gravy-like in texture.

For a more textured cranberry sauce (in addition to the regular sauce), simply separate out one cup of the mixture. To this, add the half cup of halved cranberries, the chopped nuts, and the dried cranberries. Grate in the additional teaspoon orange zest. Let it soak overnight, until the cranberries sweeten and soften up. Top with additional cranberries and zest, and enjoy! 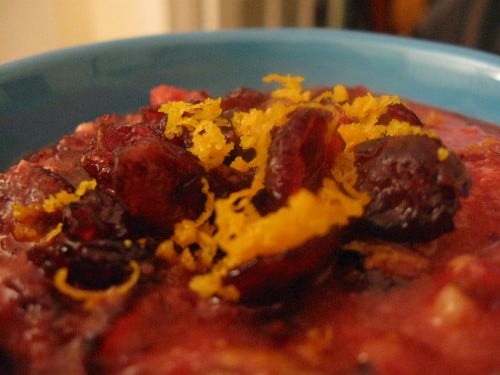 When I was transitioning to veganism, stuffed squash quickly became a mainstay for me. I love winter squash of every variety, and I especially love it when it’s paired with a tasty, warm grain. Dishes like this one live little doubt that vegan entrees provide the heft and sustenance that critics claim are lacking in a vegan diet. And they prove that holiday entrees can be delicious, filling, healthy, environmentally conscious, and cruelty-free all at once. What could be better? 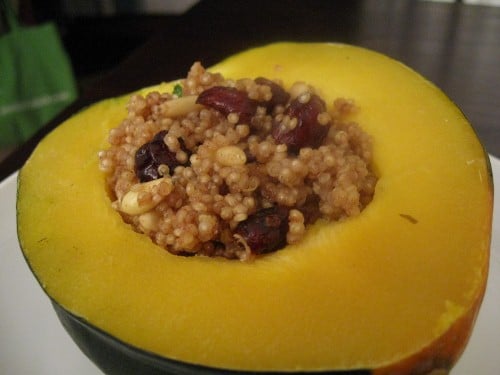 Place the acorn squash face down in a baking dish with enough water to reach 1 inch up the squash. Cook for thirty-five (or so) minutes, or until the squash is fork tender.

While squash is cooking, cook quinoa in water, according to the box instructions. When it’s ready, fluff it with a fork and add the cinnamon, agave, cherries, and pine nuts.

To serve, place one squash half on a plate, fill with a quarter of the quinoa mixture, and dust with more cinnamon if you like. 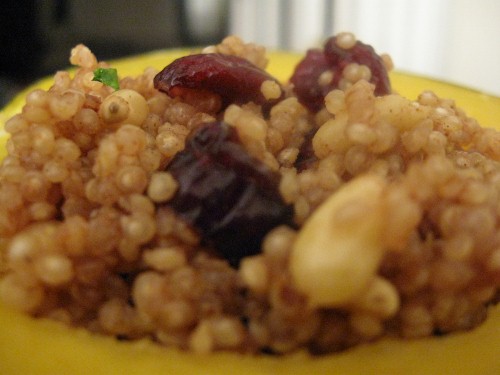 Wondering about dessert? Well, truth be told, I failed you guys in this department. The week has simply been too nutty for me to experiment with a dessert recipe. I may yet manage to concoct something spectacular before the special day. If not, I leave you with these fun ideas for inspiration:

Or, you can simply whip out the food processors and a giant bag of frozen ‘naners, and make some banana soft serve. Show your family how great raw, vegan ice cream can be!

May you all try one – or a few of these treats for yourselves, and enjoy a perfect holiday.

And if you plan to get a headstart on your holiday shopping this weekend, my dear friend Sarma is having a buy one, get one free deal on gift cards this weekend over at the One Lucky Duck website. Go check it out!!