Thank you guys for being so unbelievably smart. I was away this weekend, but I returned to find commentary and discussion in the comments section of my last post that blew my mind. I’m always impressed by the caliber of your conversations, but this dialogue was a particular winner.

One of the last comments I got was from a reader who called him/herself “Hm.” She wrote:

The fact is, not everyone who has some disordered eating patterns has an eating disorder… While disordered eating habits are common, it takes something above and beyond some “food issues” to have an eating disorder. While I’m not saying the DSM definitions are perfect (they aren’t, and a friend of mine did some research for one of the foremost ED researchers in the country that I found interesting), there are some legitimate arguments in favor of keeping them a bit on the narrow side.

I’m not saying you’re entirely off base (you aren’t), but by telling every single person who has ever gotten a little caught up counting calories or cutting out things that they’ve had an eating disorder there is a really slippery slope we risk walking.

Good point! To be clear, I didn’t state that anyone who has eating issues, insecurity, or disordered habits has an eating disorder. As I mentioned in the post, most people struggle with some sort of body dysmorphia or obsessiveness about food at some point in their lives. To label anyone who has such experiences an eating disorder patient is an overstatement, and a diminishment of the suffering that those who have severe disorders endure. My point was that many people with patterns that are severe or habitual enough to constitute eating disorders are conditioned not to heed the problem because the clinical criteria for diagnosis are too limited. And this is especially poignant for women who are at normal body weight or are overweight, but who don’t “qualify” as eating disorder sufferers because their BMIs are not low enough.

Moving on. This has been a busy week for me, and I apologize for the absence of posting! The next few weeks may prove to be a bit slim on recipes and musings, and I also may not be as consistent in commenting on my fellow bloggers’ posts as usual. But I hope to get back to my usual schedule soon 🙂

I did have a chance, though, to do one of my very favorite things this weekend: I explored vegan dining in a new city! I was in Philadelphia on Saturday night, and I had a chance to eat at the very wonderful Horizons restaurant. Rated by PETA as one of the top seven vegan restaurants in the USA, Horizons is indeed a gem: as with any great restaurant, it’s stylish and classy but unpretentious. It’s a vegan restaurant with very strong cross-over appeal. The dishes are familiar enough to omnis to appear unthreatening, and absolutely full of taste. I also thought the service was quite impressive. In short: Horizons more than earns its 26 Zagat’s rating, not to mention its immense popularity (I was there at 5:30 p.m., and it was packed).

I’ve heard that Horizons is happy to make an al raw dish if you call ahead. But when I eat at vegan restaurants that specialize in non-raw cuisine, I much prefer to taste their specialty dishes–after all, I can get gourmet raw food Chez Gena! So on Saturday, I arrived at the restaurant ready for some delectable and warming vegan fare.

My friend and I split the creamy kale soup (or rather, he ordered, and I helped myself liberally). This was terrific: delicate, gently spiced, and the perfect balance between creamy and fresh-tasting (forgive the flash photography!). 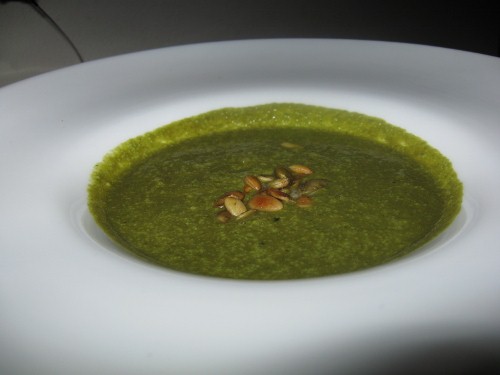 As an appetizer, I got the salt roasted golden beets (served with avocado, red onion & capers, cucumber dill sauce, and pumpernickel points). It was a beautiful little terrine, and very tasty! 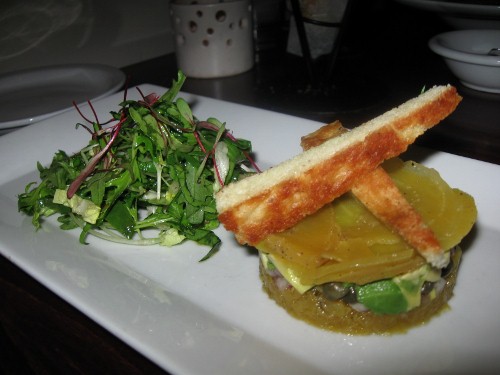 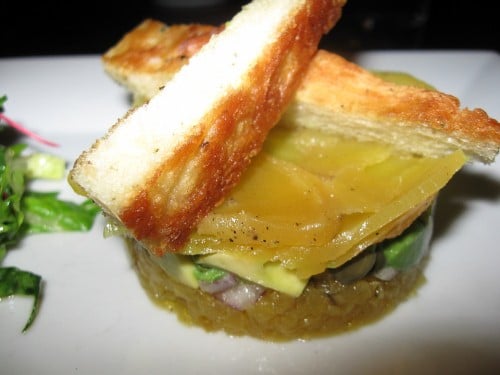 I opted for two appetizers and soup, rather than an entree, so my next course was a root vegetable salad (baby turnips, rutabaga & parsnips, shallots, pistachio black truffle vinaigrette). It was served with micogreens, and I got it along with a side of gently sauteed spinach: 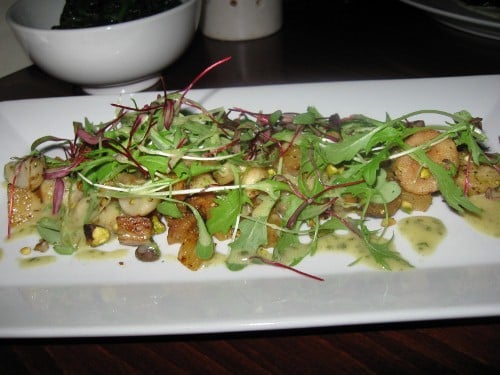 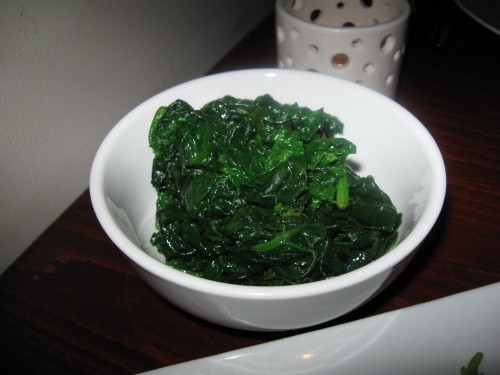 Again, the dish was delicious! Sweet, filling, and although the truffle oil was savory and decadent, it wasn’t too overpowering. My friend got the grilled seitan, served with yukon mash, grilled spinach, horseradish cream and roasted red pepper tapenade. It was superb! I’m not a seitan love (the whole “it tastes just like chicken” thing sort of grosses me out) but this was especially excellent. My friend, who is a newbie to vegan dining, loved it, too! 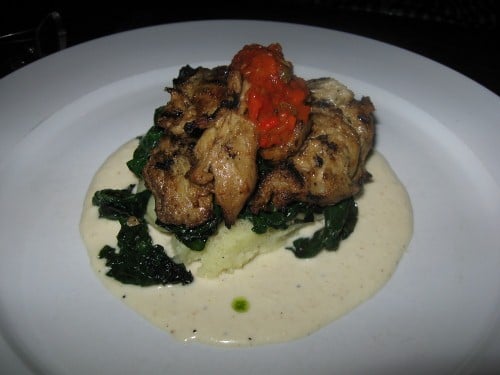 In all? I was thrilled with our meal. If you’re anywhere near Philly (and even if you’re a New Yorker who wants to enjoy a fun day trip with a lovely meal attached), I highly recommend making a trip to Horizons. It’s most definitely among the best vegan dining spots I’ve tried.

Alright, friends. It’s back to the grindstone for me. Happy Monday to you all!