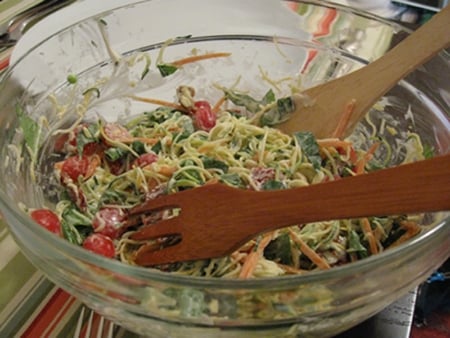 Morning, all! I hope you had a good evening. After a long day at work, I had the good fortune to share dinner with my friend Cassie last night.

I’ve met lots of fantastic people in my raw/vegan journey, and Cassie is one of the most special. As soon as I met Cassie, I knew we’d be fast friends: she’s smart and direct, but also tremendously passionate about sharing her veganism with others. In the last few years, she’s been able to help her boyfriend and her brother journey into a vegan diet with her, and she has given me a lot of support along the way.

For our dinner menu, I chose a tried and true recipe: raw zucchini alfredo. There are many variations of this delectable dish floating around on the internet. Melissa made me a fantastic version of the recipe (entitled “Pasta Primavera,” and online at the Sunny Raw Kitchen) recently, and we were both blown away. I’ve made the cashew sauce since, for dinner parties and friends, and it’s always a hit. So I decided to use that recipe as a template.

To make this dish, it’s super helpful to have a spiralizer. This magical little kitchen tool lets you turn zucchinis, beets, carrots, sweet potatoes, jicama, and more into thin, pasta-like strands. You can use the spiralized veggies as a pasta base with any kind of sauce: raw or regular tomato sauce, pesto, or the alfredo I used last night. I recommend a spiralizer because it’s cheap and fun to use, but if you don’t have one, fear not: slicing the zucchini thinly with a peeler or even grating it will be just fine, too.

1 ¼ cup cashews, soaked for a few hours (I just put them under water when I left for work in the morning)
¾ cup water
1 tsp agave
1/3 cup lemon juice
½ tsp sea salt
1 tsp miso

Begin by turning the zucchini into pasta and tossing it with the veggies. To make the sauce, put the soaked cashews in your Vita-Mix or food processor along with the agave, lemon juice, sea salt, miso, and 1/3 cup water. Blend until it looks thick and creamy. With the motor running (in either the processor or the Vita), drizzle more water in until the sauce is totally smooth (if you’re using a food processor, you’ll have to stop and scrape sides occasionally) and the consistency you want. Toss the sauce with the veggies, and voila: you’ve got a creamy, delicious bowl that (at least in my mind) surpasses the original dish. Here’s what mine looked like upon tossing:

Alongside, we had a big salad of spinach, tomatoes, cucumber, basil, and sun-dried tomatoes, tossed with a sweet balsamic dressing. 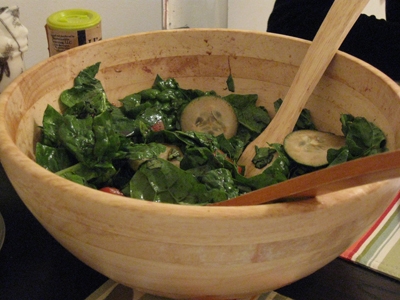 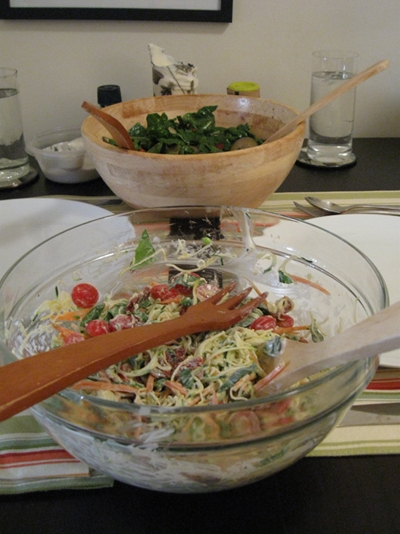 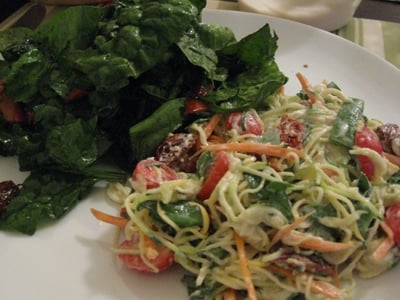 The meal was totally terrific, we agreed. And it’s healthy, too: a great source of monounsaturated fats and magnesium (from the cashews), Vitamin C (the zucchini) and Vitamins A and K, calcium, and iron (the spinach).

Unlike other raw bloggers, I fear I won’t be sharing many desserts with you: I don’t tend to make them at home, if only because I live alone and never know what to do with a giant raw pie once I prepare it. But raw desserts are truly amazing (check out Heathy’s blog and drool), and I was in luck last night: Cassie very sweetly brought some for us to try. The first was a fluffy, rich, and sweet coconut cream pie, and the second was a rich, dense, and caramel-like version of Halvah. They were both amazing. Here’s the plate before we dug in: 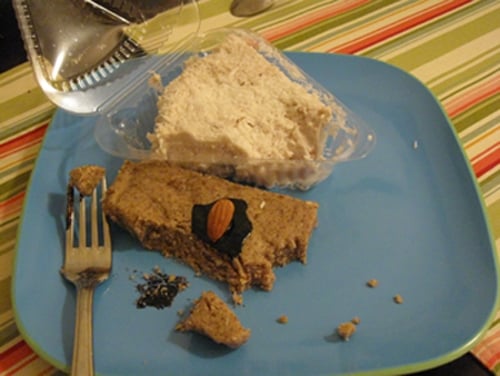 In all, it was a great night. It’s often hard for me to make dinners for guests on work nights, but I prepped the sauce (ten minutes) on Wednesday night, so all I had to do before Cassie arrived was spiralize my zucchini (five minutes) and prep the veggies and salad (fifteen minutes). Who said raw dinners were tough?

Have a great Friday, all—I’ll be back soon.