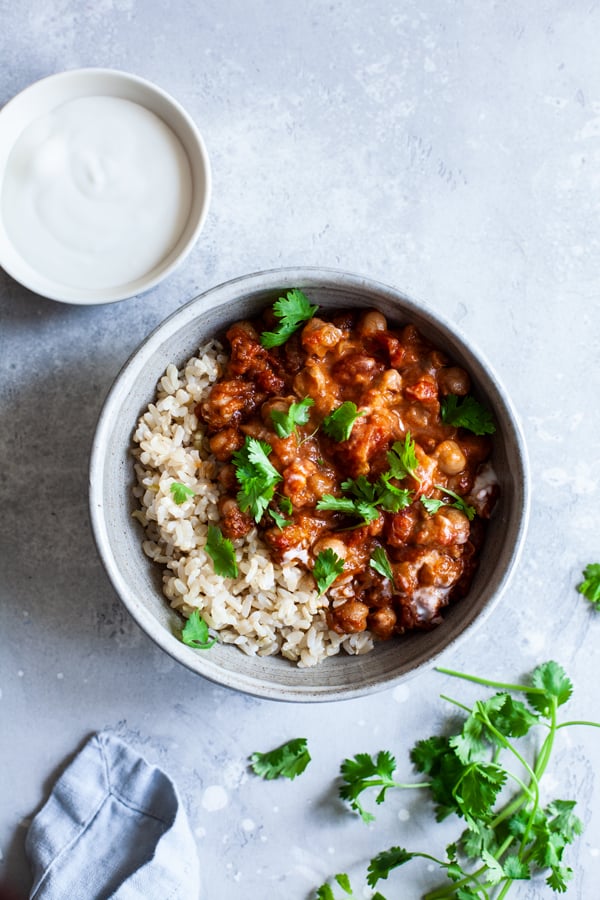 When I went to Prague last summer, I brought reading material that consisted almost entirely of food writing. One of the books was Molly Wizenberg’s A Homemade Life, in which she describes, among other things, the role that food played in her courtship with her former partner, Brandon.

There are many sweet anecdotes about intimacy developing over meals: shared excitement over the prospect of digging into a buttered baguette and sliced radishes for dinner, spontaneous dinner salads that turned into feasts. My personal favorite is Molly’s ode to Brandon’s chana masala. In a 2006 blog post dedicated to the recipe, she writes,

Mine is certainly not the first man to make chana masala, nor does he have any sort of pedigree—ethnic or otherwise—to lend him an air of authority in Indian cookery, but he does have a palate, and a very precise one at that.

Precise, maybe, but not in a way that lends itself to documentation. Wizenberg jokes about her tendency to follow and transcribe recipes, while Brandon cooks by touch, smell, and feel. I fall into Molly’s camp—a recipe follower at heart, instinctive only through practice (heh)—which makes me glad that she’s recorded Brandon’s approach to this dish. I’ve been making it since last summer, and it’s a keeper.

Lately, it’s often easier to let something simmer in my slow cooker than to keep an eye on it over a burner. If it slow cooks, I have a chance to dash outside for errands or to focus on coursework for the DI intently, which isn’t possible for me when I know that something’s on the stovetop. 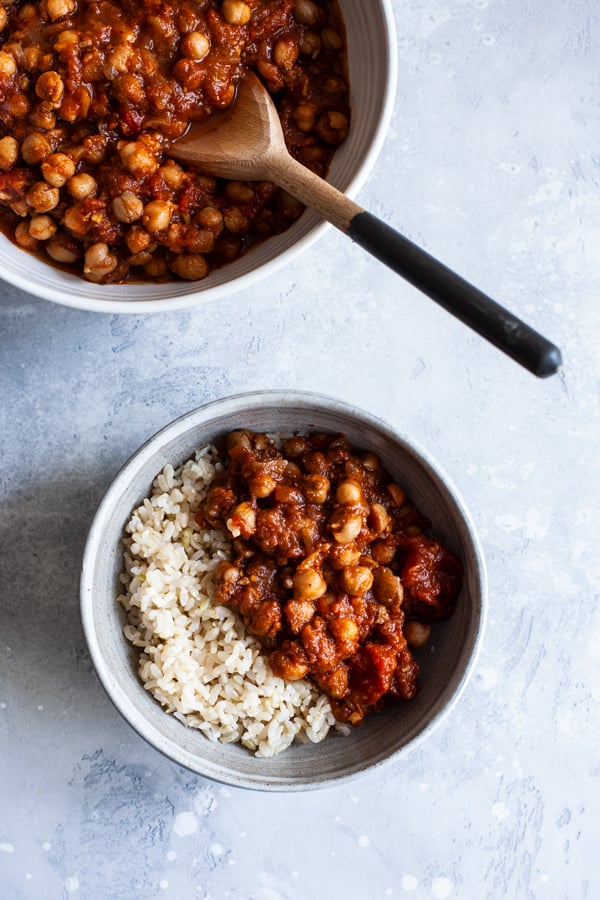 So, last weekend, as a part of my usual batch cooking frenzy, I decided to try adapting the chana masala recipe to be slow cooker friendly. It felt almost irreverent, as Brandon’s recipe is, by Molly’s telling, defined by its spontaneity and stepwise, taste-based adjustments. The recipe also starts with caramelized onions, which is a step I didn’t preserve.

For the most part, though, I kept the proportions and spices intact. I sautéed my onions, if not taking the time to caramelize them, before allowing the slow cooker to do its thing. This isn’t really my slow cooker style—for the most part, the whole appeal of the device is the fact that I don’t have to sauté or closely watch anything—but here I think it does make the recipe better. I give you the option of doing either: lightly browning the onions before the get added to the slow cooker, or not. The chana masala will taste rich and flavorful either way. 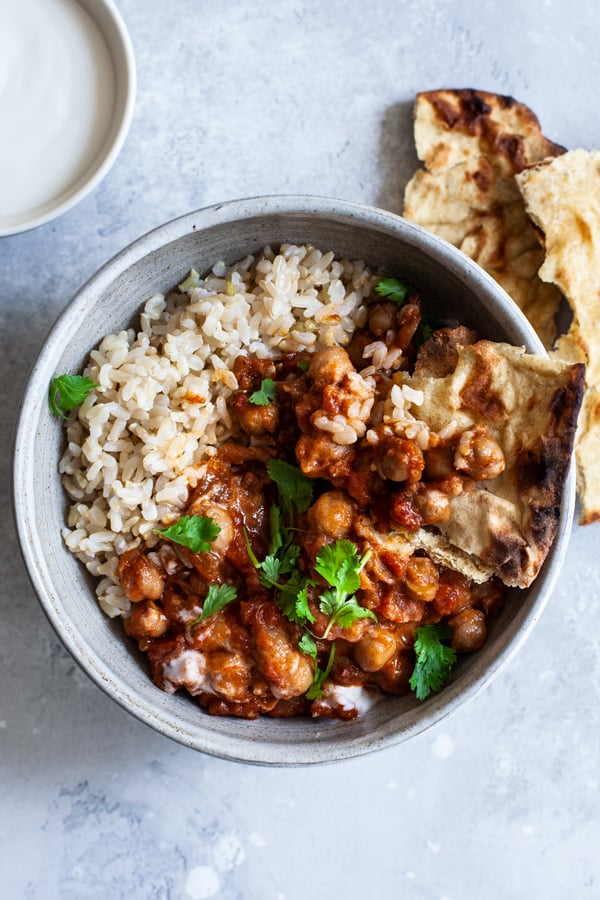 This decision aside, it’s a very simple recipe. I used my slow cooker to cook chickpeas from dry beforehand (I usually do this following Alton Brown’s instructions, on the high setting for 3 1/2 hours or so), but canned chickpeas will work nicely, too. Feel free to add more or less spice to suit your taste, especially if you know how you like chana masala or a similar dish to taste already. That modification would definitely keep within the spirit of the original dish. 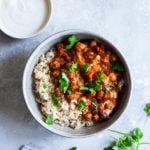 *For an oil free version, sauté with water or simply add all ingredients aside from the oil to the slow cooker **If you don't wish to use a slow cooker or don't have one, sauté the onions and garlic as instructed in a large saucepan or wide, deep skillet. Add the tomatoes and remaining ingredients as instructed. Bring the mixture to a boil, reduce the heat to low, cover, and simmer for 20 minutes. Uncover and simmer for an additional 5 minutes. Taste, adjust salt, and serve as desired. 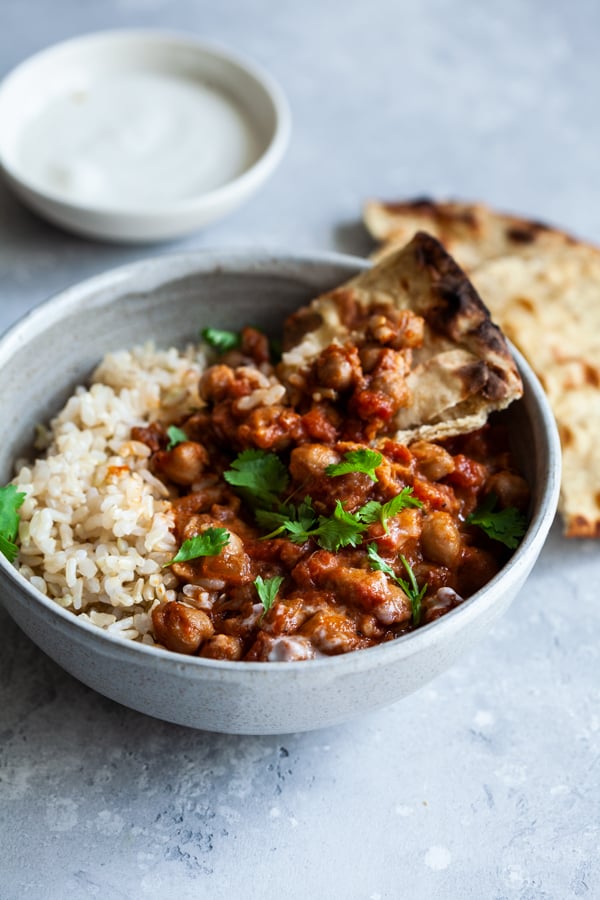 This chana masala can be served in two different styles: with a half-cup of whole-milk yogurt to smooth and soften the flavors, or sans yogurt, served with a squeeze of lemon and a pinch of fresh cilantro. I prefer the former, but Brandon leans toward the latter. Either way, this dish is even better the second—or third—day.

She’s so right about the leftovers being better as they age. I also agree that it’s lovely served either with or without yogurt; the former is less traditional but more mild, the latter spicier. I can go either way, and I tend to vary based on my mood.

As for serving, I almost always pile the chickpeas over brown rice, but last weekend I happened to have some of my homemade chapatis in the freezer, so I decided to add a few wedges of those, too—with this dish, it’s a shame not to have something to scoop up every last bean!

I’m so excited to have some of the masala now in my freezer for next week, and to have savored it pretty regularly in the last month. I hope you’ll enjoy it, too, and look forward to circling back at the end of this long week for the usual roundup.