I still remember my first semester of Orgo as a post-bacc student, when my friend Erin sat with me in the library and did her best to explain the concept of chirality. She stretched her palms in front of me and asked me to imagine a mirror plane between them: right and left were mirror images of each other. She folded her palms together to bring the point home. “But no matter what,” she said, “I can’t stack my right palm on top of my left and have them match up. They’re not superimposible.”

It took me a while to grasp the concept, but chirality would keep coming back again and again–not only in Orgo, but in future classes. I learned that the chirality of molecules has major implications in synthetic chemistry: famously and tragically, the drug Thalidomide was chiral, and when it was first sold for nausea and sedation, it was a racemic mixture (that is, some versions contained the molecular equivalent of a right hand, the others a left). One of the two compounds was a teratogen, or an agent that can harm a developing fetus.

This week, the New York Times takes a look at the role that scientist Louis Pasteur–most famous for having invented the process of pasteurization for milk and wine, and also for having developed vaccines for rabies and anthrax–played in articulating the concept of chirality. It’s not the discovery we tend to associate with him and his body of work, but it’s one of his most critical, since chirality is now such a foundational concept in organic chemistry.

Pasteur came to discover–or really, to see–chirality when he was working with paratartaric acid, a compound that results from the over-boiling of wine. After examining how paratartaric acid refracted different types of light, Pasteur postulated that the compound had both left- and right-handed crystals and that its molecular structure also demonstrated handedness. It was an observation that had eluded at least one other researcher who was trying to understand why paratartaric acid had the ability to rotate beams of polarized light.

When I took Orgo, it seemed to me that certain students were more easily able to “see” or imagine molecular orientation than others (“I just see it” was my friend Dave’s response when I asked him to explain how he was so good at classifying reactions as SN1 or SN2). We could all manage to memorize effectively, and committing the material to memory again and again was probably enough to carry us through the course. But some of my peers could visualize the material in a way I couldn’t. Their ability to see molecules–to imagine how they’d move and turn and collide with each other in space–was a huge asset.

Interestingly, Pasteur may have been able to see chirality because of his previous experience in the arts. Joseph Gal, a chemist and professor emeritus at the University of Colorado, notes that Pasteur had studied visual arts in his youth and remained closely connected to them even as he settled into a career as a chemist. Pasteur even taught classes on how chemistry could be used in fine arts training, and he carried a notebook in which he recorded his evaluations of fine art he’d visited.

Gal has uncovered a letter Pasteur wrote in which he examines mirror image transposition in fine portraiture, and he suggests that the chemist’s powers of artistic observation may have allowed him to observe handedness in crystals that had eluded other researchers. In other words, the artistic training of his youth sensitized Pasteur to space and orientation in a way that enhanced his capacities as a scientist later on.

I love Gal’s theory. I think it touches on the idea that all of us, whether we’re aware of it or not, develop powers of observation that are unique to our histories and experience. When I was just starting my post-bacc, I felt certain that I had absolutely no skill or training that could possibly help me in the hard sciences. Later on, once I’d gotten my sea legs, I actually came to realize that much of my previous education–having studied languages, for example–was a boon.

Past experience can come back to us in all sorts of unexpected ways. My earliest childhood education (nursery school and pre-K) was in the Waldorf school system, which emphasizes the visual arts strongly, and my own mother is an art teacher. I used to assume that I simply hadn’t inherited my mom’s unique visual orientation–her ability to “see” things in the shadows on sidewalks or the way light hit the side of a building. The older I get, though, the more I realize that I’m visually oriented in my own way. It doesn’t manifest in drawing or sketching, but it does find expression in the way I imagine dishes and plate food.

We can never really predict how exposure to something at one point in time will return to us later on. I often find that years need to pass before I can really look back at my experience and see how seeds were planted early on that bore fruit at a later time and place. But I think the Times article is a good reminder of the value of diverse education at an early age, especially arts education. And it speaks to the unexpected and circuitous ways in which memory can circle back to us at precisely the moment we need it–whether we’re grappling with a difficult problem or trying to unlock a mystery of some kind.

Big thanks to writer Louise Fabiani for having put this article on my radar! I hope you’ll all enjoy it, along with the other links this week. First, of course, some seasonal food links to savor. 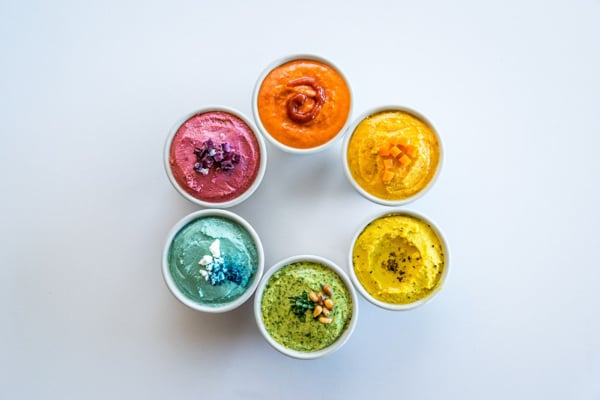 What’s better than one batch of hummus? What about six batches, each with a beautiful, distinctive color? Ryan and Adam of Husbands that Cook share a hummus base recipe, then show you how to add color and flavor to the basic template with roasted vegetables and other fun mix-ins. (I tried to guess how each batch had been colored before I read through the post, and while I was right about one of them, I was totally wrong about the others!) 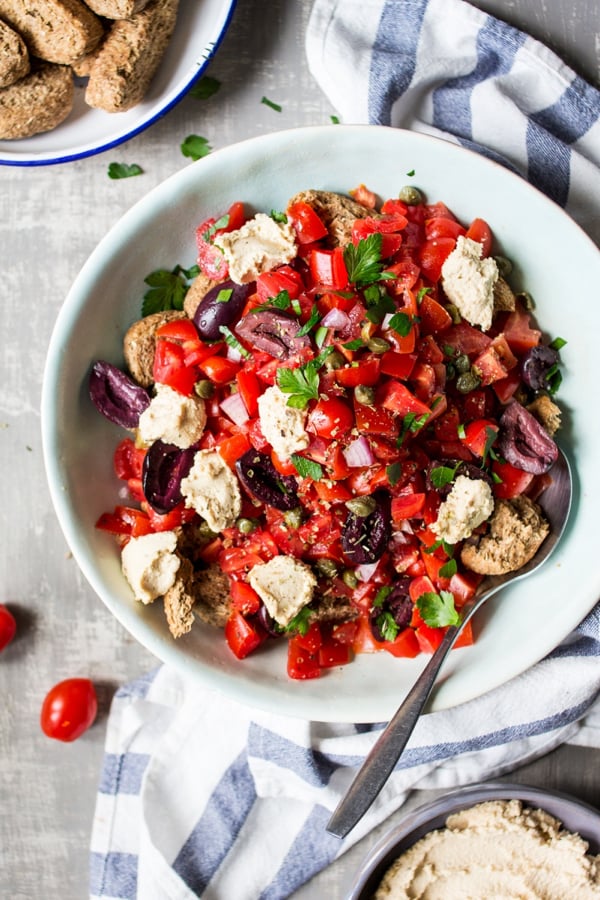 I’m loving this summery, vibrant Dakos salad from Ania of Lazy Cat Kitchen. It features torn crispbread (at this point, I’m already sold, since I love bready salads), olives, lots of sweet tomatoes, and soft vegan cheese. So perfect for the season. 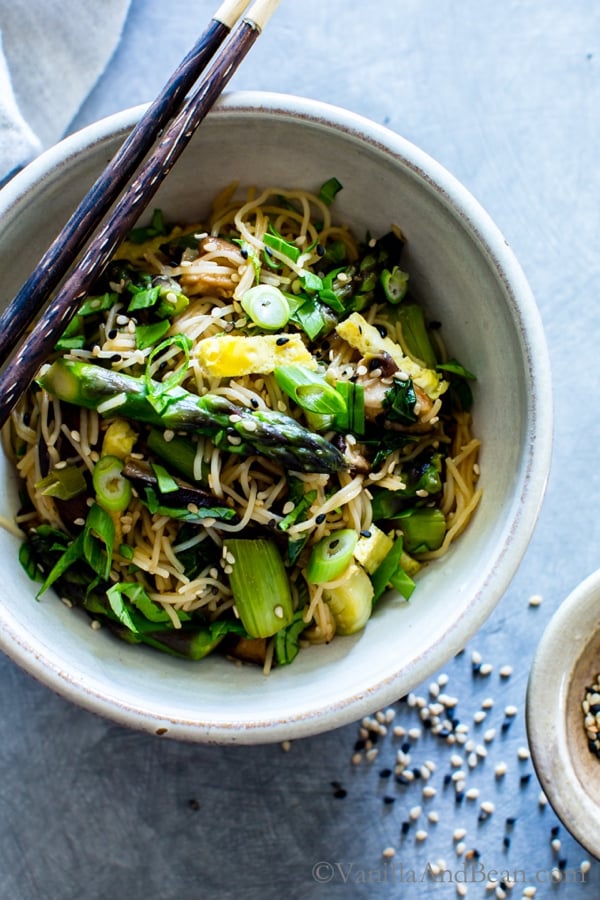 Nothing beats a bowl of noodles, and Traci’s garlicky asparagus, mushroom, and bok choy noodle bowls are packed with umami and flavor. Be sure to follow Traci’s tip on using tofu in place of egg for her vegan version of the recipe. I love the super simple sauce idea here: just a mix of broth, sriracha, and tamari. 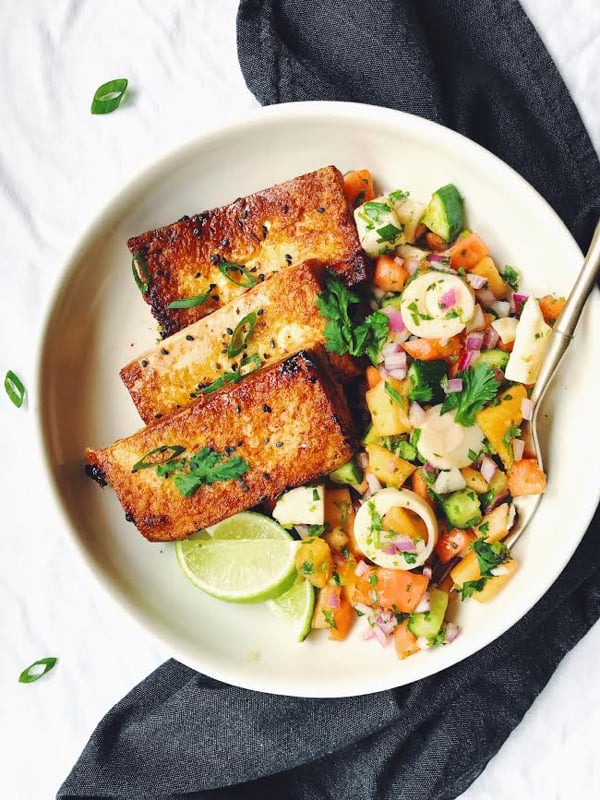 I’ve never tried a vegan ceviche recipe before, but I’m feeling super inspired by Cara’s tropical vegan ceviche, which is made with hearts of palm and jicama, as well as plenty of fresh fruit. She pairs it with a tangy batch of seared tofu for a perfect, easy summer supper. 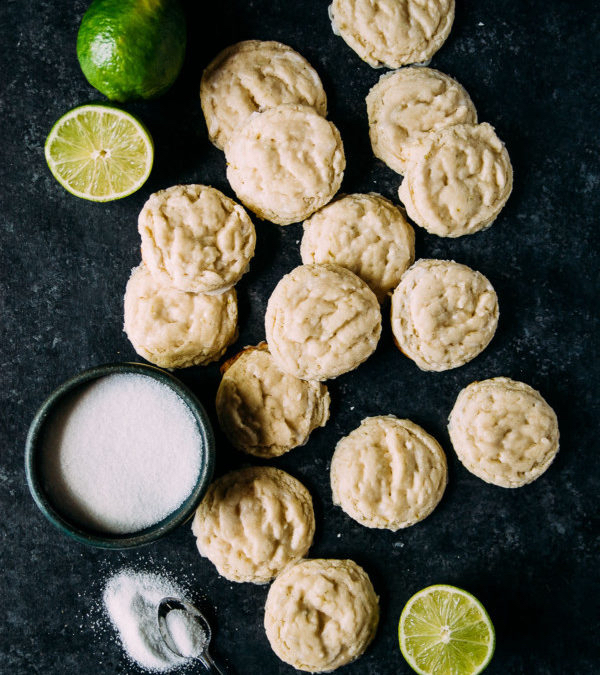 Finally, I’m loving Abby’s vegan lime sugar cookies. They seem like a sugar cookie/snickerdoodle hybrid to me, all jazzed up with the tangy flavor of fresh lime. They’d be such a great treat to serve with iced tea on a hot afternoon.

2. Also on the topic of space and orientation and drawing: Quartz has a cool article about the differences in how people draw circles around the world. Apparently most Americans draw counterclockwise, though before I got to that bit–when I was just doing as the article asked and scribbling a circle quickly on a piece of paper–I learned that I always draw clockwise. The article goes on to explain how difference in language and reading, among other factors, might influence shape-drawing.

3. A smart, powerful op-ed in StatNews about medical over-treatment and excess care.

4. An interesting read for anyone who’s interested in nutrigenomics, or the study of how nutrition and genes interact.

5. Finally, an incredible long-form article about the secret life of urban crows in Seattle. I knew next to nothing about crows before I read it, and I hadn’t really thought of them as a cosmopolitan bird species. I learned that crows recognize human faces and hold grudges for human misdeeds–grudges that can even be passed from one generation to the next, if crow babies witness their parents being mistreated. Crows also show great appreciation for humans who treat them well, leaving them little gifts that can include candy, keys, and coins.

Many years ago, I edited a book about wildlife in Central Park. It was my first real glimpse into the lives of urban-dwelling, non-domesticated, non-human animals. This article reminds me of that book; it paints such a vivid and illuminating portrait of how, even in decidedly non-wild settings, we always share our physical space with members of other species. And we develop unique forms of symbiosis with them, whether we’re fully aware of it or not.

Enjoy, and happy Sunday (happy Father’s Day, too, to those of you who are celebrating). I may be a little quiet for the next week or so as I head into the final stretch of my first summer term, but I’ve got a new cookbook review in store this week, and a delicious, simple recipe to go along with it.

Happy Sunday, everyone! As always, I hope that the weekend has brought you rest and restoration. Steven’s birthday was this past week, so we had a small celebration with friends on Friday and some quiet time yesterday. Now I’m catching up on meal plans for clients and diving into these recipes and reads. First, a super simple but delightfully summery lunch idea from Ashley of Cookie Monster Cooking: summer garden veggie flatbreads. Next, I love these crispy avocado tacos with roasted radishes and…