Happy Sunday, all. For those of you who were busy celebrating July 4th, at home or far away, I hope you had a lovely holiday. The day started off with gray skies and cool temperatures here in NYC, so it didn’t really feel like the 4th, but by late afternoon the clouds had lifted and the sun was peeking out, and it was dry and lovely. Steven and I had a restful afternoon, followed by a small gathering with friends to watch fireworks light up the city skyline.

And now, I’m sipping coffee and catching up on a week’s worth of visual feasting. Here’s what caught my attention! 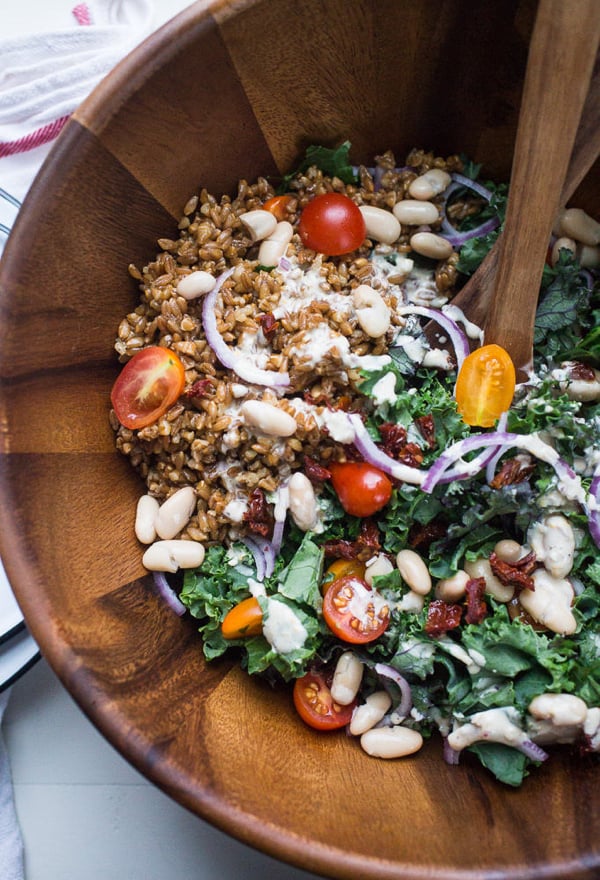 A colorful, texture-packed kale, white bean, and farro salad from Tara of Smells Like Home. 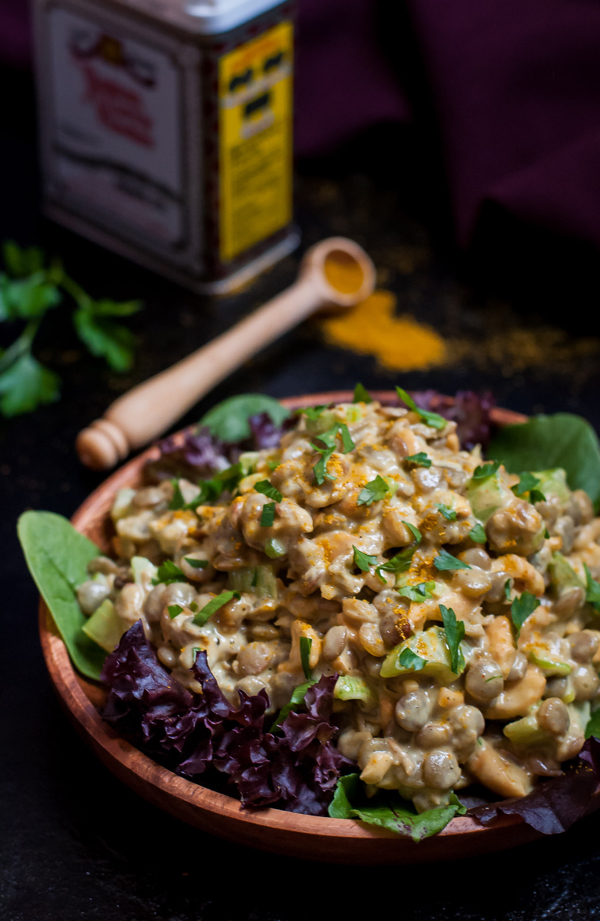 On the topic of salads, I love the looks of this curried lentil salad from Tessa of Natural Comfort Kitchen — a great, sweet/salty marriage. I’d use Beyond Mayo or Veganaise with it. 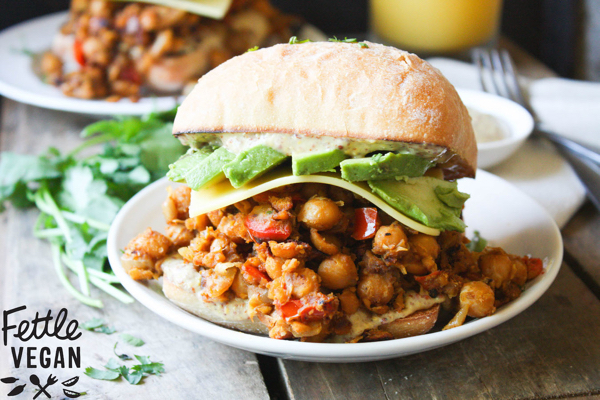 I totally fell for chickpea scrambles after I posted this recipe in March. Amber and Alex’s chickpea scramble breakfast sandwich sounds like a fabulous start to any day, or a perfect weekend brunch recipe to share with friends. 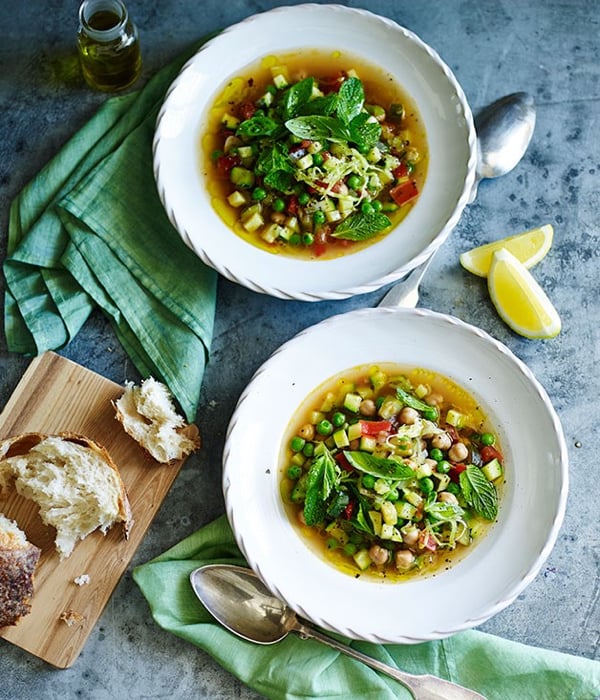 I recently stumbled on this recipe and thought that a green minestrone was an inspired idea. Lots of lemon and chickpeas sweeten the deal. The recipe has chicken stock as listed, but vegetable stock could be easily substituted. 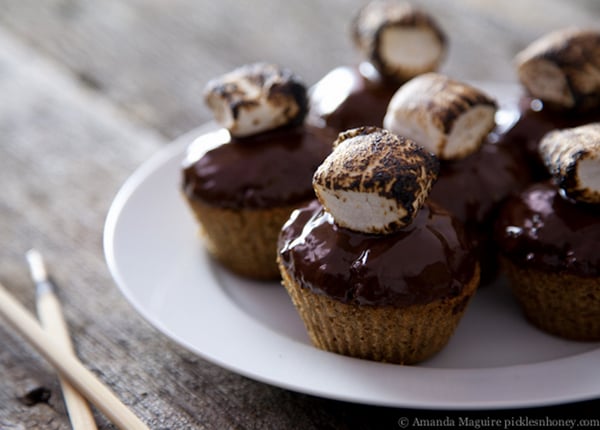 For dessert, it doesn’t get any better than Amanda’s gluten free, vegan s’mores cupcakes. Yum. As an added sidenote, Amanda and her husband are in the midst of an epic journey across the country, and they’ve been posting some fantastic photos from national parks–as well as some of their vegan road trip eats on Instagram. It’s definitely worth following along with their adventures!

1. So much new information and research is emerging about the microbiome that it’s hard to keep up with it all. One of the latest areas of research is the impact of the microbiome on neurochemistry and mood. This article from The New York Times profiles the work of Mark Lyte, a scientist at Texas Tech University, whose team has been investigating how gut microbiota can produce neurochemicals and what the impact of those chemicals might be on human biology. “Given the extent to which bacteria are now understood to influence human physiology,” the article states,

“it is hardly surprising that scientists have turned their attention to how bacteria might affect the brain. Micro-organisms in our gut secrete a profound number of chemicals, and researchers like Lyte have found that among those chemicals are the same substances used by our neurons to communicate and regulate mood, like dopamine, serotonin and gamma-aminobutyric acid (GABA). These, in turn, appear to play a function in intestinal disorders, which coincide with high levels of major depression and anxiety. Last year, for example, a group in Norway examined feces from 55 people and found certain bacteria were more likely to be associated with depressive patients.”

2. This week, Nathan Runkle of Mercy For Animals spoke up in the New York Daily News about the moral inconsistencies that shape our treatment of animals. His words about our capacity to assign ethically-grounded protections to companion animals while we simultaneously commodify farm animals are hard-hitting and important.

3. Also on the topic of animal rights and social justice, Ethan of VeganMos wrote a succinct, powerful blog post on lessons that animal rights’ advocates might learn from the American Marriage Equality movement.

4. As I’ve mentioned in the past, I am a great fan of David Katz and his knack for cutting through nutrition world scuffles and honing in on common sense. His article this past week on the Scientific Report of the 2015 Dietary Guidelines and its treatment of dietary fat is a good example.

For the first time, the report makes no specific reference to an upper dietary limit for fat intake. Katz supports the lift of an upper limit on several grounds: first, the observation that cultures of people around the world vary quite a bit in their fat intake, but all share a common emphasis on whole, plant foods, and moderation. Second, he notes–as he has in the past–that creating upper limits on fat intake without offering education in different types of fat and their impact on health may be a disservice, as all fats are not created equal when it comes to heart health, longevity, inflammation, and the like. Finally, he notes that fixating exclusively on fat reduction has caused excess reliance on low-fat foods that are nevertheless overly high in refined carbohydrates–which is not a healthful tradeoff. “For literal decades now,” he writes “we have fixated on some particular nutrient while looking right past foods, and overlooking the overall dietary pattern.”

Finally, Katz notes that while some of the world’s healthiest diets are very low in fat, and others may contain up to 40% of calories from fat, none of those diets are extremely high in fat, which is an important observation. “Diets proven in both research and real-world settings to be good for life-long health,” he writes, “all emphasize vegetables, fruits, beans, lentils, and whole grains, all of which are natively low in fat. When these are prominent, or predominant, in a diet, there is a limit to how high in total fat that diet can be.”

So, while the upper limit may be lifted, diets that have the most weight of evidence as far as disease prevention go still tend to limit fat intake–not thanks to a fat quota or cutoff, but simply thanks to the whole foods that they naturally emphasize.

5. Finally, Steven shared with me this article in Aeon, which touches upon how new standards of “buff” and muscular physique may be impacting men and their sense of body image. The author, Clarissa Sebag-Montefiore, writes,

“Female body image issues have been flagged up for decades. Women are paraded and berated in the media, told they must be unhappy with their bodies and bombarded with flawless (often Photoshopped) butts, breasts and bellies. But what about men? In past generations men were not expected to be extremely well-muscled. A slight stomach or skinny arms were okay. While many men played sports, few went to the gym merely to beef up. Today, however, shifting gender roles and the rise of social media – where everything is recorded and broadcast on smartphones – has led to increasing pressure on men, as well as on women, to look ‘perfect’.

Many men are ‘obsessed with being lean and muscular’ notes Roberto Olivardia, a clinical psychologist at Harvard Medical School and co-author of The Adonis Complex (2000). The ideal is ‘to look less like Arnold [Schwarzenegger] and more like a Calvin Klein male model’. That means a lean but defined upper body with broad shoulders, tapering to smaller hips in the coveted V-shape, ‘cut’ or ‘ripped’ arms and abs, and next to no body hair.”

The article goes on to detail the problems associated with these new ideals and the social media outlets that popularize them, including depression and profound body dysmorphia. I think it’s a very important read, for men and women alike.

Alright, friends–that’s it for this Sunday. Enjoy the links, and I can’t wait to return with a new recipe!

Happy Sunday, all. My thumb is finally healing and the stitches are out, so this past weekend has been full of recipe testing. The fridge is stocked with a strange (but tasty) assortment of sweets and salads and soups. In particular, I’ve been whipping up my first few batches of summertime pesto, and I’ll be sharing the fruits of that labor here on the blog on Thursday. For now, here are some of the recipes that stood out to me this week, plus some…