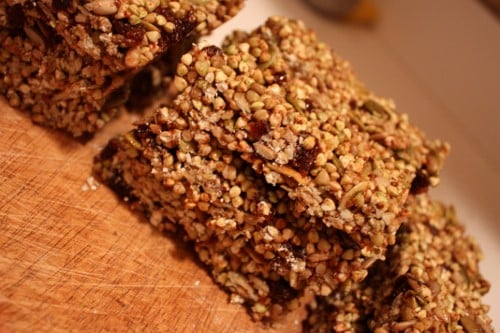 For a good while now, I’ve been meaning to create a homemade raw, vegan energy bar. My primary motivation is economic: this is going to be a lean autumn, and I can no longer afford to drop $$ on Larabars and Lydia’s buckwheat bars (even though I love them both, and would buy them by the bushel if I could afford to). Another motive is culinary: I like challenging myself to new things in the kitchen, and I’ve never really tried a bar recipe before, raw or cooked!

My main motive, though, is the simple fact that I’m a tough customer. I have various dissatisfactions with most of the raw/vegan snack bars I’ve purchased–even ones that I like. Lydias, are heavenly, but they’re outrageously expensive. Larabars taste incredible, and I love munching on them along with a salad or other meal components, but they seem to offer me very little in the satiety department. Raw Revolution bars are great, and they’re calorically dense enough to keep me full, but I find them (and Larabars, for that matter) to be a little sugary.  Sigh. I know I’m a tough critic, but couldn’t someone give me a bar that’s inexpensive, tasty, not too sweet, and also filling?

Last week, when it occurred to me that I might create such a snack for myself, I set out to make my first raw snack bar. For a first try, it was a winner! It isn’t perfect, and I imagine it’ll go through some tweaks in the coming months, but it’s super easy, pretty tasty and satisfies the criteria above. I finally have a homemade snack option that I really like, and that offers me a little financial relief.

Since nuts and dried fruit don’t tend to fill me up the way whole grains do, I used a buckwheat+seed base, and added some raisins and maple syrup for sweetness. With a little ground flax, the bar held together nicely, and here’s the best part: it’s dehydrator free. I used my dehydrator to speed along the drying process, but these bars will definitely set up in the fridge (I tested this theory with a double batch) which means that those of you without dehydrators can toast the buckwheat groats in the oven and then make the bars, too. Cheap, quick, and easy: what’s not to like? 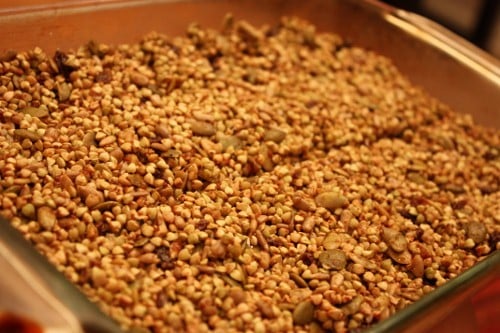 1) Mix all ingredients together until evenly coated and distributed.

2) Press mix down in a pan (my baking dish was oddly shaped: 7 x 11), and cover the top tightly with a layer of tin foil. Place in the fridge for an hour, and then cut the dough into bars (you should be able to get 10-14, depending on your pan). 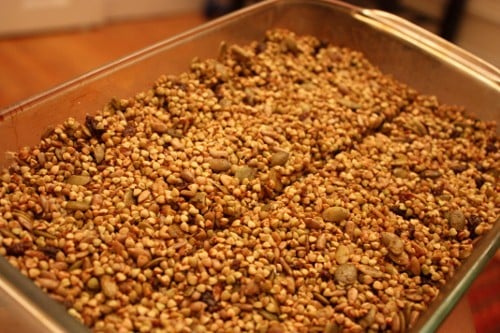 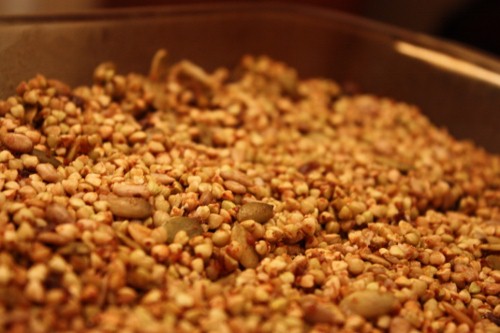 Continue to refrigerate for another few hours, and then serve!

Dehydrator option: If you want these to be super crunchy, or you’d like to speed the process along, dehydrate them at 115 degrees for three hours, stopping midway to cut them into bar shapes: they’ll be warm and very crispy when you’re done.

3) Separate the bars and wrap them tightly. Store in the fridge and freezer till you’re ready to use. 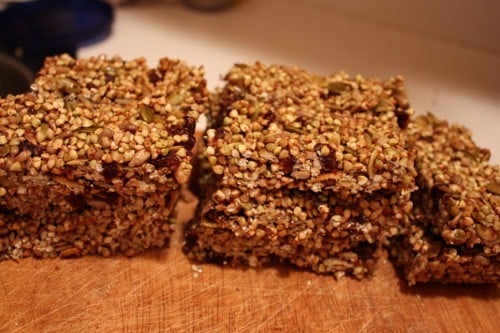 I’ve now got seven of these in the freezer and seven in my fridge, and I look forward to grabbing them for snacks on the go!

Though I don’t usually do nutritional calculations for my recipes, I did want to show you how nicely balanced these guys are. Checkit:

I’ve already snacked on these twice, and I found them pleasantly sating. I think the whole grain+seed combo is key. In any case, you’ll tell me! Let me know if you try this recipe out, and whether or not it’s a hit.

And aside from that, I hope your weeks are off to a great start.