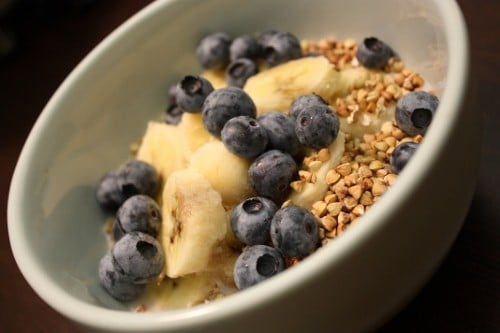 Week after week and month after month, there’s one meal that readers ask me about more than any other: breakfast. This is probably due to the lack of breakfast visibility on CR: I tend to be more interested in my lunch and dinner creations than my morning ones, and so I post far more of those recipes than any other.

Of course, that doesn’t mean I don’t love my morning meals: I do! I simply don’t tend to invest them with much innovation. Oats and oat bran (cooked) are a staple for me, especially in cool months. Smoothies (which I frequently like to blog about) are another morning standard. I love smashed avocado or raw nut butter on sprouted grain toast, and I love baked yams with coconut butter. Sliced bananas with almond milk and ground flax seed are another summertime favorite, as is chia seed pudding. And on days where I’ve got a very early lunch planned, I’ll sometimes drink fresh juice all morning (note, however, that this is atypical, and if I do juice till lunchtime I’ll very consciously add a lot of heft to my later meals). You can find a summary of some of my breakfast favorites here. And there’s nourishing breakfast I love, which I’ve yet to blog about: buckwheaties and almond milk.

I’ve yet to meet a whole grain I didn’t like. But buckwheat, which many consider an “acquired taste,” ranks high among my favorites. Here are some fun facts about buckwheat (which is also known as “kasha” when it’s toasted before cooking):

I usually eat buckwheat cooked, but it’s also one of my very favorite grains to sprout (see my wheatberry sprouting post for some how-to info).  And lately, I’m loving raw, dehydrated buckwheat — which I and many fellow raw foods lovers call “buckwheaties” — as a breakfast cereal.

Cold breakfast cereals fall into the category of “dishes Gena didn’t like cooked, but loves raw.” These include soups (I really didn’t become a soup lover until I started playing with raw soups), milk of any kind (thank you, almond milk!), and crackers. Memories of being forced to eat cereal as a kid make me shudder, which is peculiar, since I always did (and still do) adore hot cereals.

Anyway, I digress. Raw granola (like One Lucky Duck’s spectacular blend) and the buckwheaties I’m about to share, coupled with learning how to make fresh, delicious nut milks, changed cold cereal as I knew it. Now, buckwheaties are one of my favorite summer breakfasts, and I hope they’ll soon be one of yours, too!

The procedure is simple. Begin with a cup of raw buckwheat groats. You should be able to find these at any grocery store, but you could also order them here. Immerse them in 3-4 cups filtered water, and let them soak overnight. In the morning, rinse off the water and replace it with fresh water. The soak water ought to have gotten slimy and thick overnight: this is 100% normal, and right.

After another 8-12 hours of soak time, rinse the buckwheat again. It ought to have plumped up to nearly the size it would if you were to boil it. At this point, you could let the grain sprout. But if you want to make buckwheaties, simply lay it on Teflex-lined dehydrator sheets and dehydrate it at 115º for 6-10 hours, or until it’s really dry and crispy. If you don’t have a dehydrator, you can toast it in the oven at 300 for about 30 to 40 minutes, or until it’s crispy and totally dry.

That’s it! Your buckwheaties will be ready to go. I like to serve about 3/4 cup of them with a big, sliced banana and some fresh nut milk: 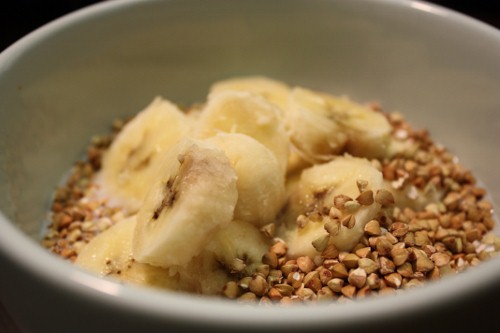 And then I like to top it off with some blueberries for color! 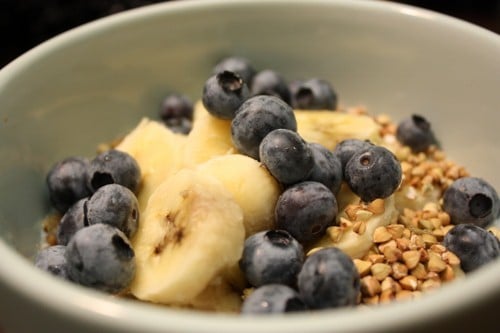 It makes for a lovely presentation, even if I’m at my office desk:

So there you are. A raw breakfast that’s appropriate for summer temperatures, but provides the satisfaction and staying power that smoothies sometimes lack. Soon, I’ll show you more uses for buckwheat; it really is a wonderfully versatile grain!