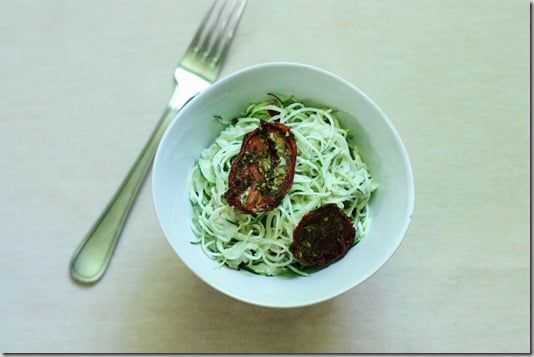 Have you checked out my sidebar lately? If so, you’ve probably seen my Vegan Cuts banner, and perhaps you wondered, “what’s that?”

Vegan Cuts began in the same way Groupon and Living Social did: it was a weekly email featuring deals on products & services. 100% vegan products and services, that is! The emails and newsletter are still very much alive, but the site has grown into an online marketplaces as well, where you can find fabulous deals on vegan apparel, footwear, cosmetics, skincare, food, snacks, and more. Vegan Cuts has featured deals from some of my favorite vegan businesses and non-profits: Rawxies, Our Hen House, No Meat Athlete, Christy Robinson, Compassion Couture, and Sacha Vida, to name only a few. It’s a tremendous resource for those looking to find great, animal friendly products on a budget. Beyond that, Jill and John, the founders of Vegan Cuts, are just wonderful people. I’ve had the pleasure of meeting them on several occasions now, and each time, I’ve been struck by their generosity, kindness, and their energy as activists and engaged members of the vegan community.

Every time I read Vegan Cuts’ newsletter or visit the site, it seems that Jill and John have partnered with one of my favorite vegan brands. Today’s offer is no exception. Vegan Cuts is promoting a three pack of snacks from organic, raw vegan company Just Pure Foods. 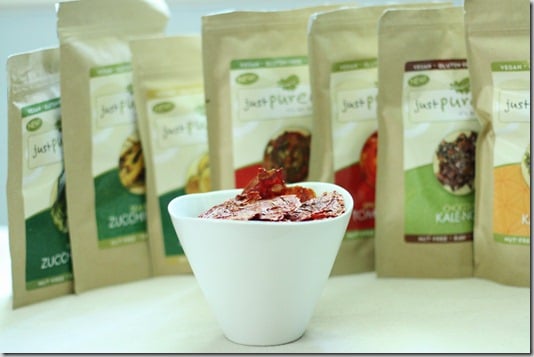 I love Just Pure Foods. I was lucky to meet the company’s founder, Justin Feldman, last year at Expo East, and was thrilled to hear that he’d developed a line of veggie snacks! As a student, I spend a lot of time relying on dried fruit, nuts, and snack bars for fuel; this is fine, but it gets old, and I also find myself missing savory food and vegetables. The Just Pure Snacks offer dehydrated veggies (often seasoned with seeds and spices) in a variety of flavors, like jalapeno tomato chips, pesto or ranch flavored zucchini chips, raw, vegan “onion rings,” cheesy kale chips, cocoa kale chips, and pesto tomato chips. Today’s Vegan Cuts deal features two bags of seasoned zucchini sticks, two bags of onion rings, and two bags of tomato chips.

Justin and the folks at Vegan Cuts kindly sent me a sample pack to taste. I was so grateful! I’ve been carrying these to class with a smile all week. So far, my favorite are the tomato chips: what an ingenious, tasty idea! 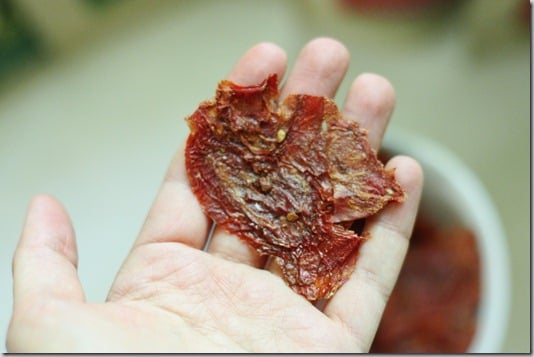 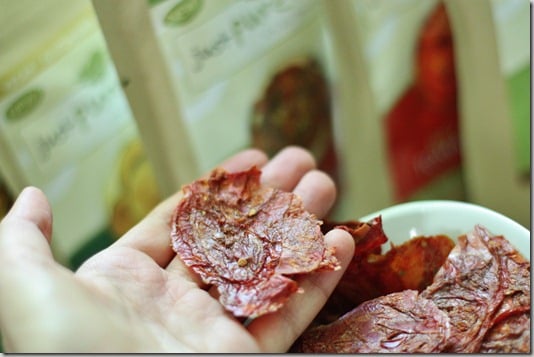 As you’ll see, I came up with an easy recipe for these guys, but I also bet they’d be great in sandwiches and wraps.

The zucchini sticks are also a favorite: great on their own, but they add tremendous crunch and flavor to salads, too: 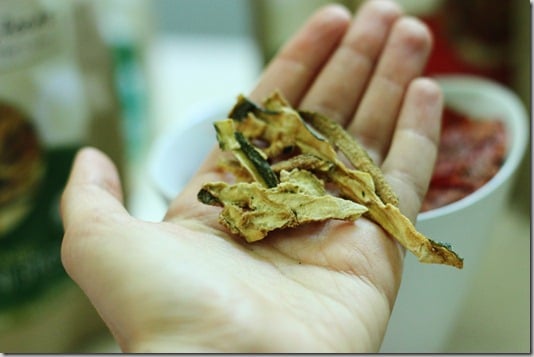 Note that all of these snacks are nut-free; Justin uses sunflower seeds, sprouted buckwheat, hemp seeds, and seasonings to achieve his texture and flavor. This makes them a great option for those with nut allergies (and they’re already gluten-free for those with celiac or gluten sensitivity).

Justin sent me a few flavors not included in the Vegan Cuts sampler, just so that I could see what they’re like. Lucky me! I inhaled the cheesy kale chips: 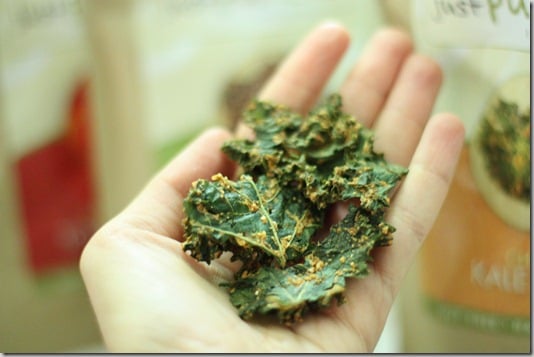 And finally, what I may be most excited for is the cocoa kale-nola: this is dehydrated kale and buckwheat, coated in chocolate. Oh my goodness. It’s heaven in a breakfast bowl: 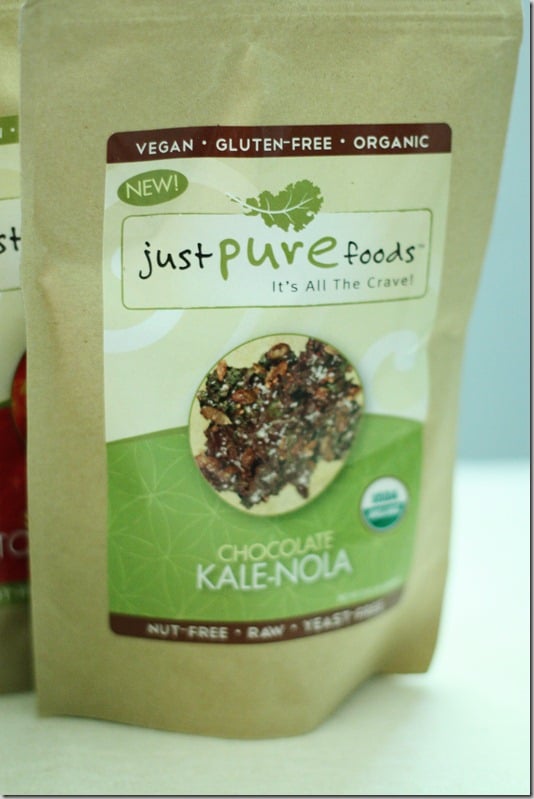 That’ll be polished off this week, for sure.

In all, I couldn’t have enjoyed this sampler more. The only downside of these incredible snacks is that they, like most vegan snacks that are raw and organic, can be a little pricey (totally understandable, given the fact that the produce is high quality, and that dehydration time is involved). For that reason, I really recommend that you jump on the chance to taste some of these delicious foods at a sharp discount, using the Vegan Cuts deal!

To learn more about Justin’s business, which uses vegetables straight from Tuttie Frutti farms, and engages in sustainable practices, read more on his website. Or you can follow him on twitter: @justpurefoods .

In the meantime, check out the delicious bowl I made with his tomato chips: 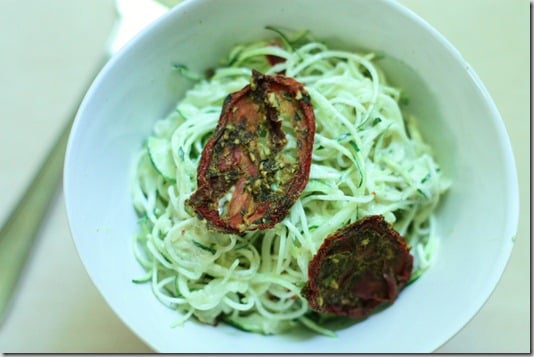 That’s one recipe of my raw zucchini pasta alfredo, with tomato chips crumbled in and used as a topper. Absolutely divine. And proof that delicious raw snacks can certainly double as parts of a meal!

Hope you all have a chance to sample some of these veggie-ful snacks. Let me know what you think! And tune in later this week, because I’ll have my own kale chip recipe to share. In the meantime, expect a lovely morning smoothie tomorrow.