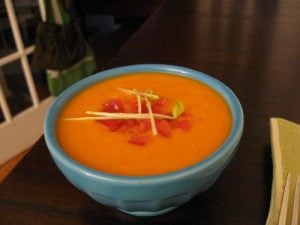 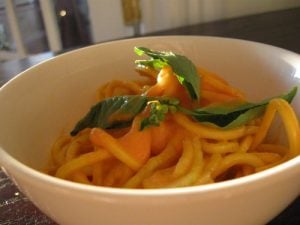 Thanks again for all of the thoughtful commentary on meal delivery! I think it was a great discussion.

So, remember when I tried to recreate the wonderful coconut and red pepper soup at Bonobos? It was a good attempt—certainly a winning recipe—but I’ll admit, it wasn’t an exact replica of the miraculous original. Recipes are like most things in life: there’s some trial and error before we can get them right. And this soup is so worthy that this week I decided that I would not settle for anything less than perfection.

As it turns out, the secret to a perfect soup was simple: more coconut. Lots more. I suspected this was true when I first made the soup, but having only one coconut on hand, I settled for a thinner consistency than the Bonobos version, which is really more of a red pepper flavored coconut shake than a soup, per se. This time, I approached the recipe armed with not one, but four young thai coconuts. Take that, thin soup!

Here’s the revised recipe, which came out nothing short of thick, decadent, coconut-rich bliss:

Blend all ingredients in a high speed blender till thick and creamy.

*Modification for those of you who are scared of young coconuts or have lousy blenders: substitute two avocados in place of the coconut meat, and add some citrus juice to taste. It’ll be a different soup, but still a tasty one!

NB: This soup is extremely rich. All of the fat in here is good fat, of course, and the decadence is what makes the recipe so good, but if you are specifically trying to lose weight, this might be a recipe to save for when weight loss is no longer your goal.

The best thing about this recipe is its versatility. On the first night I made it, I enjoyed it as a regular soup: 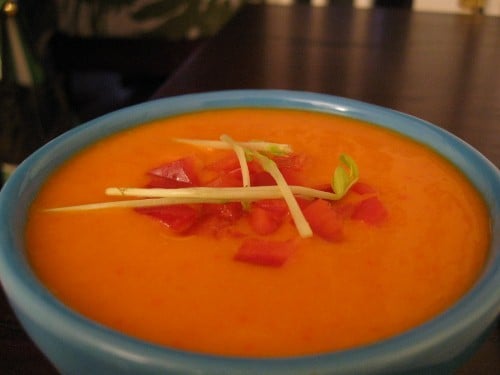 And on the next night, I tossed it with zucchini pasta, basil, and a squeeze of lime for my version of red Thai coconut noodles: 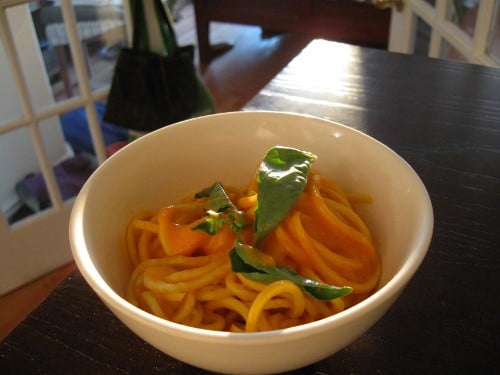 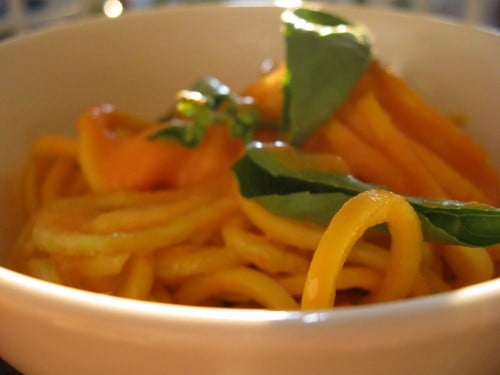 Both dishes were delicious. And this soup could also be used as a dip, a rich salad dressing, or a sauce for any medley of vegetables—particularly an Asian inspired bunch. Hooray for versatility!