Glad that the pumpkin chia pudding got such a hefty response. I’m already excited to make it again! I also wanted to point out that Lori and Michelle actually beat me to that punch: they posted a similar pudding a few days ago, using young Thai coconut meat, too. Check it out!

On Friday, I mentioned that I tend to be a slouch about using all of my many kitchen appliances to their full advantage, and posted a new favorite rice cooker recipe. This weekend, I got a tutorial in a kitchen appliance I’ve yet to use, but have been curious about for a long time: the pressure cooker.

All vegetarians and vegans ought to own pressure cookers. Why? Because as much as they’re commonly used to make meat dishes or chicken (ack), they’re probably best known for slashing down the cooking time on rice, beans, and legume-based stews. This is part of why they’re ubiquitous in countries like India, where rice and beans are mainstays. It also makes them dream appliances for vegans and vegetarians, who count grains and legumes as the cornerstones of their diet. I’m no exception to this rule, though I do often find myself purchasing canned beans rather than cooking them properly, mostly because the thought of ninety minutes of cooking anything feels painful to me. With a pressure cooker, I’d be able to whip up beans and grains in as little time as it takes me to make salad dressing.

Why? If you’re interested in the full mechanics of pressure cooking, I’ll direct you to the very extensive and helpful Wikipedia entry to that effect. But to put things simply, pressure cookers trap steam, which raises pressure within the pot. Water boils at a higher temperature at higher pressure, which means that the water and temperature in the cooker can reach higher temperatures in shorter times than they would via conventional cooking. Translation: rice, beans, soups, stews, veggies, and more, all in twenty minutes or (usually) much less. This means lower utility bills, less electricity use, and faster dinners for impatient diners. As a nutritional bonus, faster cooking times also mean less vitamin and nutrient depletion—an important concern to rawcurious vegans.

Pressure cookers have always struck me as appliances only for the hardcore. Even the name sounds intense, and I’ve had nightmarish visions of exploding pots, jiggling metal parts, and steam burns for as long as I’ve been interested in pressure cooking. Last night, however, my friend M, with whom I’m staying in DC, showed me how to use his pressure cooker(s). 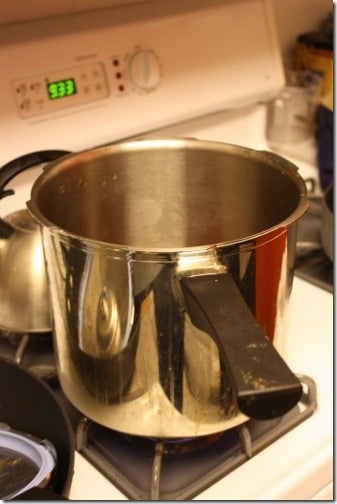 As it turns out, they’re not difficult at all! In fact, they involve nothing more than putting water and food in a pot, affixing a sturdy top to it, and watching somewhat vigilantly until the cooking time (which is miniscule) ticks away. At the end, you release pressure, either by letting the steam release from the pot naturally, or by a rapid release mechanism (which will vary on various pressure cooker models). That’s it.

For my first pressure cooker experience, I got to watch as rice and beans came together in twenty minutes flat. M happens to have two pressure cookers (he’s an aficionado), and so wild rice went into one pot, as kidney beans went into the other. 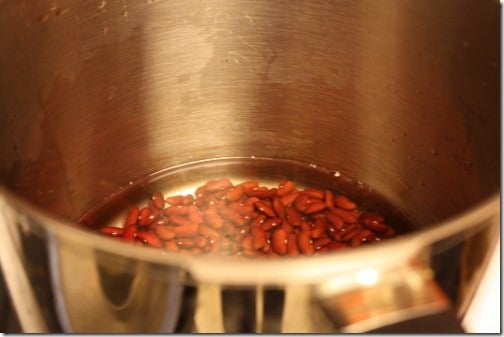 Soon enough, both were halfway finished. 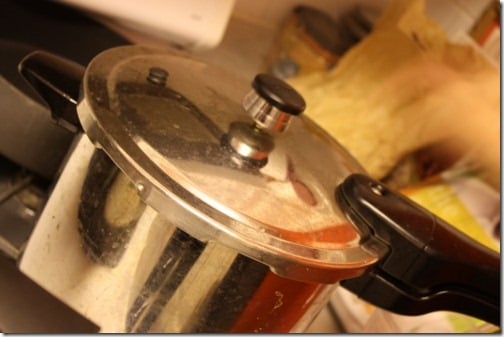 And after some quick steam release, we had tender rice and beans for two. We kept the rice warm, while M sautéed some onion, tomato, and what he swore to me is the best vegan sausage known to man. I’m not, nor ever was I, a sausage fan, and you all know that faux meat isn’t my jam. But I have to admit, this stuff was insane: 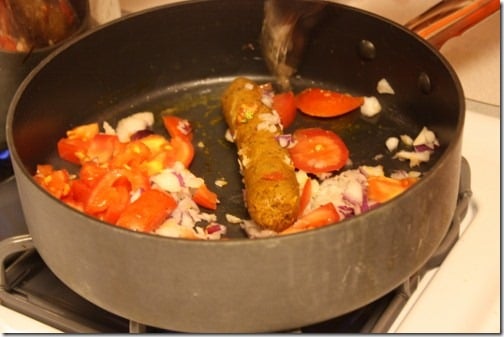 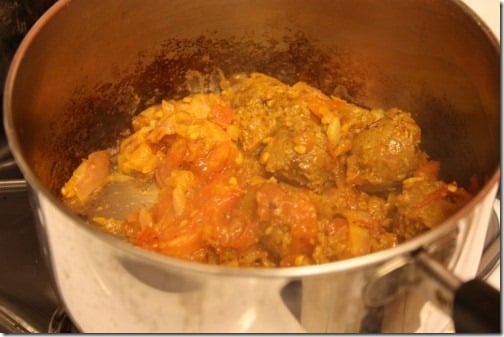 It’s Field Roast, and we had the Mexican Chipotle variety. Really good. Just really, really good. Even if you think the faux meats are sketchy, I suggest you try this stuff.

To this stew, M added the beans. I steamed up some fresh CSA broccoli, and tossed that with a simple lemon vinaigrette and some avocado (it wouldn’t be a meal without it). Moments later, rice, broccoli, and bean stew were plated.

Note the carrot/celery/ginger/pear cocktails—M is the very recent and very sanguine owner of a new juicer, and we were pretty excited for these guys: 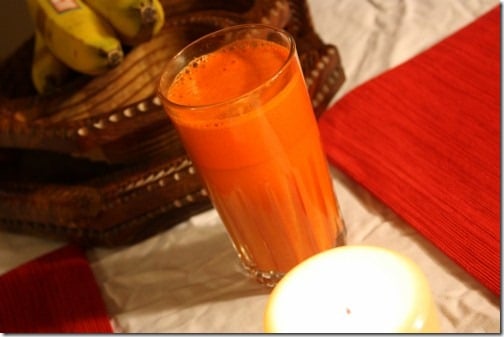 Check out the finished vegan stew: 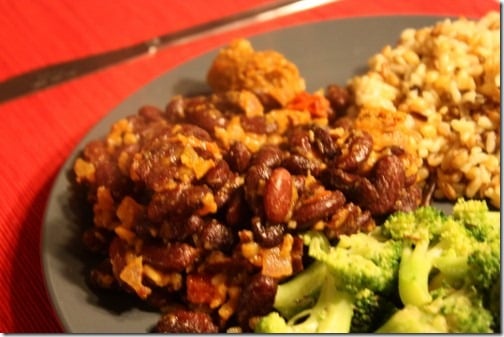 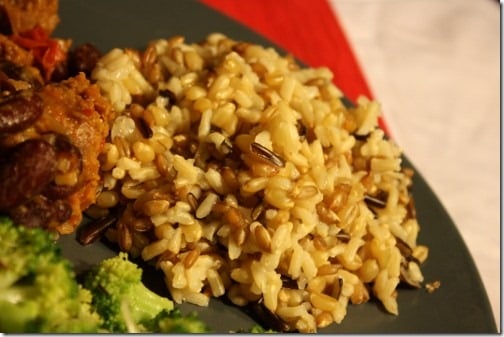 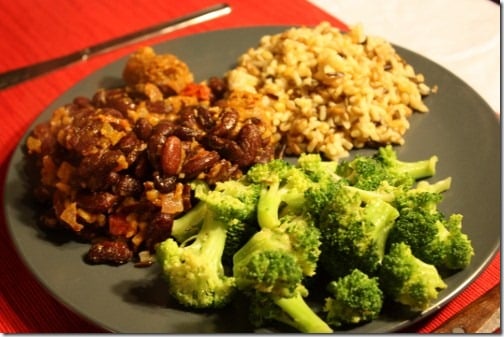 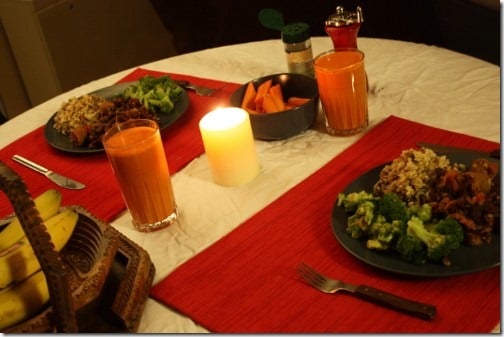 Tonight, we made good use of the leftovers, mixing them together and serving them with some butternut squash and salad. 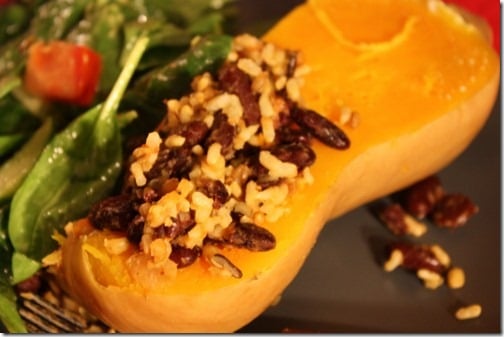 That squash, by the way? Seven minutes in the pressure cooker. Incredible stuff.

So now, I’m doing some brand comparison in my head, because it’s obvious to me that I’ve been deprived each and every year that I lived without one of these genius appliances. Stay tuned for a major purchase announcement, perhaps paired with a review, and a long winter full of hearty soups and stews.

And now, some serious post-Columbus Day work catch up needs to happen, though it’s likely that it’ll be punctuated by an episode of Mad Men, at least if M and I have our way. And as you may have guessed by now, friend M is a little bit more than just a friend. To say much more than that would be more than I’m interested in saying: we bloggers must reserve the right to keep certain parts of our life private. But I will say this: I’m truly lucky.

I’ll be back with some DC dining recaps tomorrow. Night, bloggies.