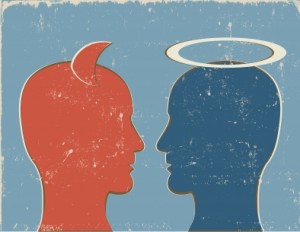 Happy almost Friday! I knew you’d get a kick out of the kale chips; I just so happen to have munched on some with my lunch.

About a month ago, my client and fellow blogger Sarah posed a particularly insightful question to me, which I wanted to share with the rest of you. She wrote,

My next question is about cognitive dissonance. Since reading Intuitive Eating, I have thought a lot about this idea that food is neither good nor bad (i.e. Make peace with food: food is not the enemy, and there is no “bad” food). I agree, but I struggle with this concept as a vegan. My reasons for being vegan range from the environment to animal rights to health, and to me…it is impossible to remove the label of “good” and “bad” entirely from foods when my food choices are related my ethics. Just to be clear, on a conscious level I don’t feel that I am denying myself pleasure by eating a vegan diet.

However, food has a ton of meaning as a vegan. Just as someone could say to someone who is overly concerned with fashion that “clothes are just clothes,” I would say that clothes are so much more – they represent class, wealth or poverty, oppression of others (in sweat shops), etc. Maybe that makes me a bit of a drag, but I think that I am having a hard time letting go of the meaning – and, consequently, the obsession – of food, when it is so intertwined with my ethics…Do you have any advice on this (i.e. how I can remove value judgments from food whilst still being true to my ethics by being a vegan)?

I thought that this was a brilliant question. It was also a hard question, and I spent a few days mulling over my answer. Before I share it with you, I should note that while there are many things about Intuitive Eating that I like, I don’t agree with it in its entirety. I take some lessons from it, and leave others behind. Like any approach, it can be taken to an extreme, and can breed its own pressures toward orthodoxy.

Here’s what I responded to Sarah, along with some subsequent thoughts:

Getting beyond this way of thinking took time. In essence, I had to come to terms with the fact that there is simply no food that I can or will eat that will make me a bad person. I mean this sincerely: even if I were to walk to McDonald’s right now and eat a big Mac, I don’t think I’d suddenly be a bad human being—a gluttonous or dirty or uncontrollable one. It would be unlike me, given my preferences and ways of thinking, and if I were to do it again, and again, and again, it would be a “bad” habit in the sense that I would be perpetuating a contradiction between the way I behave and the way I think and feel. I don’t like hypocrisy, and I don’t court it. But a single meal, a single moment? It wouldn’t make me question my own value. I would regret it and not repeat it, but it would not make me turn on myself.

No single meal will lessen my perception of my self worth. Two weeks ago, I was at a very important work dinner, and there were no vegan options. So when I asked, the waiter brought me a vegetable terrine that was supposed to be vegan. After a few hungry bites, I realized it had butter in it. So what did I do? I ate the other things on my plate, and told the waiter politely that I was fairly sure that butter had been in the dish, and that he should never let the kitchen serve it as a vegan option. He said he wouldn’t.

Was I a “bad” person for digging in before I realized? Should I have thrown it up, or obsessed over it? Some vegans might have, but I didn’t. It was a few bites of buttery vegetables — butter that I didn’t intend to eat, and which I didn’t purchase with my own money. I did the responsible thing in telling the wait staff not to serve it to other vegans, and I moved on. I wish the dish had been vegan, because I would have enjoyed it in its entirety! But the food wasn’t “bad” in the sense that it could single-handedly make me feel bad about myself. It simply wasn’t what I wanted, or would choose.

I think it can be helpful to draw a distinction between choice and obligation. I titled my blog, in part, to suggest this: I find that eating raw foods (whether habitually, or once in a while), vegan foods, organic foods, and local foods are all exercises of free will and choice. If we are lucky, we have options of things to eat, and the power to make an impact with our spending as consumer. We get to consider what makes our bodies feel good, and we get to choose which foods we believe are worthy of fiscal support. I don’t purchase meat for a confluence of reasons: I don’t like it, I don’t think it’s environmentally friendly, I don’t think it’s compassionate, and I don’t think it’s good for my health. I choose not to eat it because I don’t need or want to, and because I believe my money as a consumer is better spent on other things.

This is a choice I make, not because I think that meat (or other animal products) could single-handedly make “bad,” but because I have the option of living without it, and that option feels superior to me than living with it. The avoidance isn’t to stave off guilt or self-hatred, nor is it a superstitious, quasi-religious fear of “dirty” food. It’s a choice, born of being informed, empowered, and lucky enough to have dining options I prefer.

In the end, I think my main point is this: saying that you will categorically avoid a certain food can in some ways mimic the self-limitation and restriction and good/bad thinking of disordered eating. But it is not necessarily the same. Whether or not it is the same depends entirely on one’s mentality, and not on the avoidance itself. What’s ultimately important is whether or not you are making a choice that is wholehearted and based upon deep personal conviction (and pleasure, too). If you’re avoiding a food or groups of foods because of paranoia, self-loathing, or fear of guilt, then perhaps you should reevaluate the avoidance. But if you’re doing it because it feels right to you – both in terms of health and in terms of ethics – then I’d say you ought to applaud yourself for being proactive and conscious, rather than worry that you’re being un-intuitive.

Human beings are instinctual creatures, which is why the idea of eating intuitively is so appealing. But we are also thinking creatures, and we have the power to make distinctions between things we do and don’t want based on our beliefs. That isn’t necessarily a bad thing – it’s an exertion of our own capacity for rational thinking and measured decision making.

After I wrote this, it occurred to me that this reasoning can definitely be applied to ethical positions that aren’t vegan. For example, I have friends who are omnivores, but who take a tough stance about eating local and organic, which means that they’re frequently excluding  certain foods from their diets at certain times of the year. Would they be “bad” people for occasionally eating conventional produce, or GMO crops, or for eating out of season? No—they’d only be eating in a way that’s out of harmony with their ideals. And they’d probably choose differently at the next meal.

I’d love to hear your feedback on this. How do you settle the “cognitive dissonance” between avoiding moral terminology when it comes to food, and making food choices that are sometimes specialized or exclusive?

With that “food for thought” (he he), I wish you all a great afternoon!