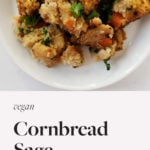 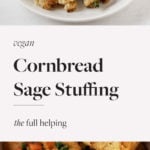 I love stuffing. It is my favorite Thanksgiving food, and I’ve made a batch every year for the last six or seven.

I don’t get tired of finding new stuffing ideas. I’ve made vegan stuffing with wild rice. I’ve made it the classic way, with a country boule of bread. I’ve made another bread version with Brussels sprouts, apples, and butternut squash. And now, I’m trying it with cornbread.

The beauty of cornbread stuffing

Now that I’ve made this vegan cornbread sage stuffing, I may not return to regular bread!

OK, probably an overstatement—I love all breads equally. But cornbread has some qualities that make it especially good for stuffing.

First, it’s got a subtle sweetness. I don’t add sugar to my simple, whole grain vegan cornbread, which is what I used in the recipe. But the corn still contributes a slightly sweeter flavor than regular bread.

For even more of a sweet/savory mix, you could try using my pumpkin cornbread.

Also, cornbread is also incredible at soaking up liquid and seasoning. And this is exactly what bread in cornbread should do! I was impressed at how vibrant the flavors in these stuffing are. Not just the cornbread itself, but the herbs, too.

Do I need to make cornbread from scratch?

Not entirely. There are some cornbread mixes on the market that are vegan, like the gluten-free cornbread mix from Bob’s Red Mill. Just be sure to use your favorite egg replacer (I like aquafaba and applesauce) when you bake them.

If you use a substitute, keep in mind that you’ll need about eight cups of cubed cornbread in total.

With all of this said, making cornbread from scratch isn’t a huge time commitment. And homemade isn’t too much more complicated than baking from a mix! Especially if you choose a simple recipe.

Can the cornbread be made ahead of time?

Definitely. The simple, whole grain vegan cornbread can be made up to three days ahead of time. You can even prepare it up to six weeks early, then freeze it prior to making the stuffing.

Speaking of freezing, the stuffing itself can be prepared in advance and frozen for up to four weeks. You can also store it in the fridge for two days prior to serving. Just reheat in a 350F oven for about 25 minutes before enjoying it.

With each year that goes by, I become more focused on streamlined, unfussy holiday recipes. It’s part of what drew me to this recipe, which is especially easy if you make the cornbread in advance.

As you’ll see, I also kept the seasonings and ingredients simple. I’ve made stuffing that features lots of herbs and a whole slew of ingredients: cranberries, squash, crucifers, pearl onions, nuts, seeds, and so on.

I’ve loved the depth and complexity of those results. But, with time and convenience in mind, I kept the seasonings intentionally sparse in this recipe. Sage is the prominent flavor, along with fresh parsley. The vegetable component is a humble trio of onion, carrot, and celery.

It works nicely. There’s nothing flashy or over-the-top about this vegan cornbread sage stuffing, but it checks all of the stuffing boxes. It’s filling, flavorful and carb-forward. It tastes traditional, but the cornbread makes it a little unique.

It was a hit in my home this year. And I know I’ll be making it again and again, through future holiday seasons. 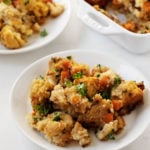 As it is, the stuffing is a perfect holiday side dish.

If you’d like to serve it as a centerpiece, or if you’d simply like to make it more nutrient dense, you’ve got options. You might stir in some of the tempeh sausage crumbles from this recipe before baking (along with the parsley).

Another option would be to add slices of your favorite vegan sausage. I’m guessing that the Field Roast smoked apple sage sausages would be excellent! Smoky tempeh strips or my lemon pepper tempeh cubes would also work well, as would seitan grounds.

Whether you dress it up or down, I hope you enjoy this carby, comforting recipe soon. And if you’re sharing, I hope your loved ones will enjoy it along with you. I’ll be back on Thursday with another festive meal idea for your holiday table. Till soon,