Tempeh Ratatouille
No ratings yet
Jump to Recipe 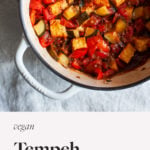 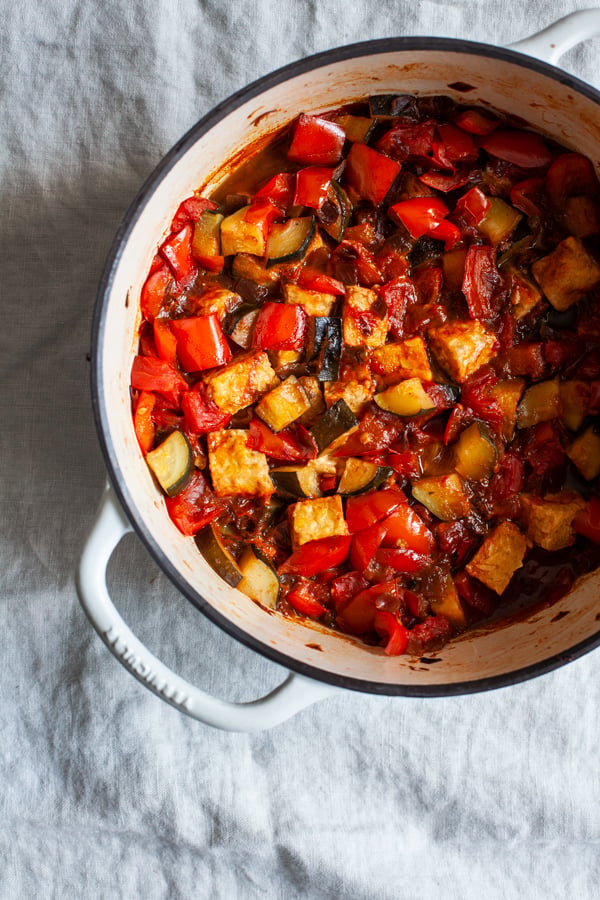 It wouldn’t be summer in my home without at least a few batches of ratatouille. It’s a recipe that I love, but I’m always trying to simplify the process of making it, whether by throwing it in the oven or paring down the traditional method of cooking each vegetable separately. This version, which includes tempeh for protein and nutrient density, won’t be my last ratatouille by any means, but it is a new favorite.

Just as I was at the height of my internship this year, I was approached by the Vermicular brand and given an opportunity to cook with its Musui–Kamado. The Musui–Kamado hails from Japan. It’s a pairing of an enameled, cast-iron Dutch oven pot (that’s the Musui) and an induction heating base with precision temperature control (the Kamado) that’s custom made to fit the pot perfectly. When they’re used together, the Dutch oven heats up quickly and evenly, and from that point the whole appliance can be used to steam-roast, rice cook, sous vide, sear, braise, bake, or precision cook ingredients.

The appliance is beautifully crafted and lovely to look at; unlike a lot of other appliances, I love having it out on my tiny kitchen counter! 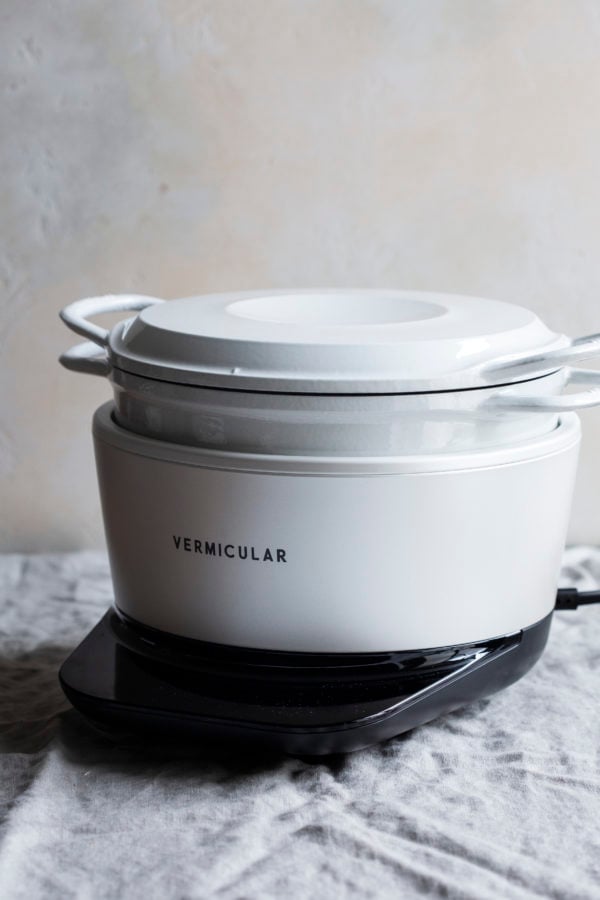 I should preface all of this by saying that I have little experience with an appliance like this one. Until last year I had only a basic slow-cooker (now I have an upgraded one), which is why I’ve had such a hard time giving readers good instructions on converting my slow cooker recipes to multi-cooker functionality. Exploring the Musui–Kamado and its precision cooking was new territory for me, and in some ways this was a good thing! It encouraged me to read the instruction manual carefully, to read through the brand’s own, lovely cookbook, and to take my time in figuring out what each heat setting can do.

The rice I’ve made in the Musui–Kamado is the best I’ve ever made—and I’ve had a few rice cookers in my time, not to mention a few go-to stovetop methods. Of course stovetop always works, and you all know that frozen brown rice is one of my favorite shortcut meal hacks. But I can’t say that it hasn’t been a delight to cook rice in this machine, ending up with batch after batch of perfectly fluffy, perfectly textured grains.

Also worth noting: the lid of the Musui is designed for an almost airtight fit, which gives it what I think is its most special feature: oil-free and (nearly) water-free cooking. You can put pretty much any vegetable in the Musui–Kamado, add a tablespoon or two of water to prevent burning (the enamel coating is easy to clean and almost nonstick, but not quite), and then cook them on the low heat setting. Vermicular calls this “steam-roasting,” where the vegetables cook in their own steam, which results in them having bright, intense flavor.

This—the ability to concentrate flavor without added seasoning—is my favorite feature of the device. It makes minimalist vegetable cooking so easy and rewarding. Another major bonus: potatoes! Sweet potatoes, Japanese potatoes, and purple potatoes turn out beautifully. I bake a lot of potatoes, and the sweet varieties are even sweeter and more intense when they’re cooked this way—on the low heat setting for about 40 minutes. 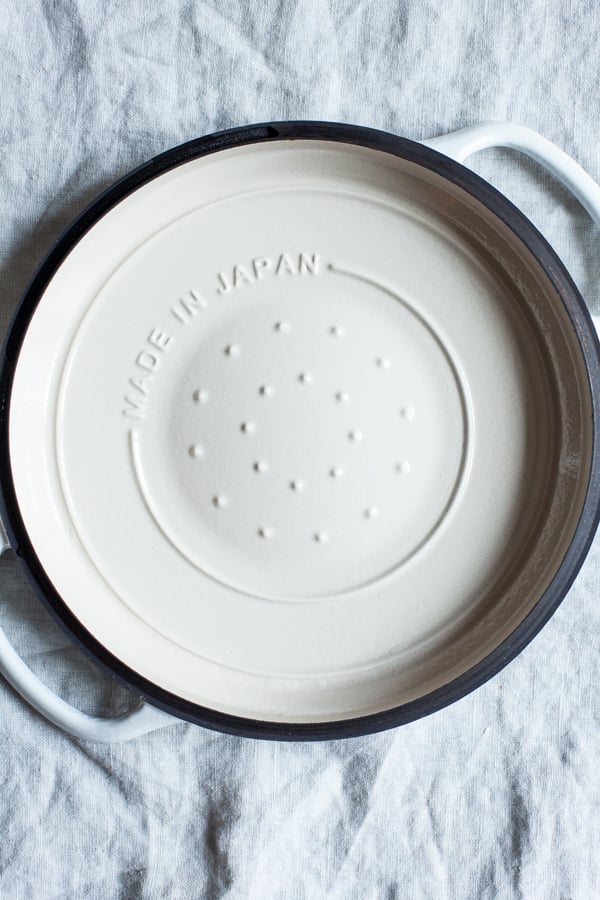 Steam-roasting aside, the machine’s ability to roast and sear and make soup/stew is nothing to sneeze at! I’m excited to make roasted tofu, braised seitan, and soup in the Musui–Kamado. But for today, let’s chat about this nutritious and flavorful tempeh ratatouille. 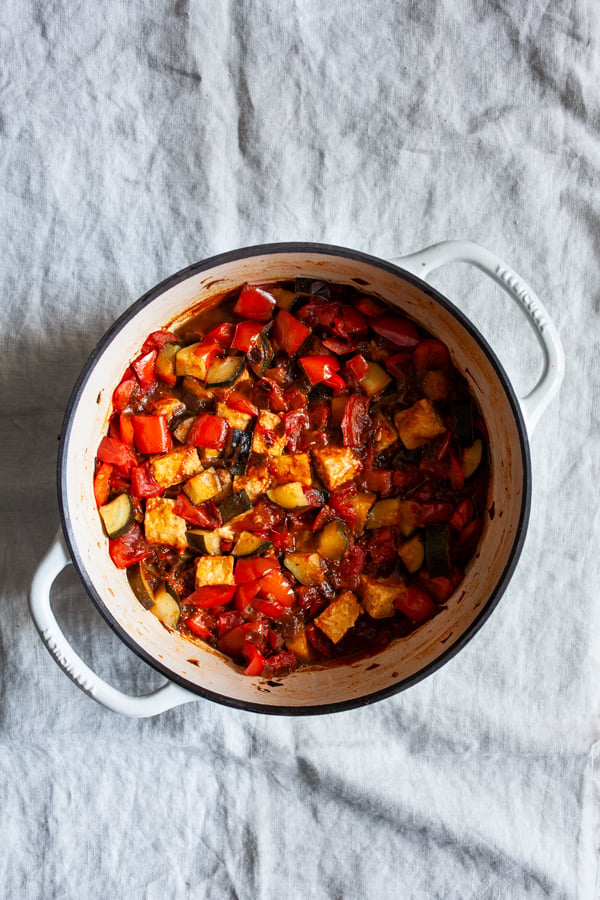 This recipe definitely shows off how easy it is to use the Musui–Kamado’s different heat settings. I cooked the tempeh on the low heat setting with a little broth (1/2 cup) and two teaspoons of Bragg’s Liquid Aminos (tamari or soy sauce would be fine). When it was tender and all cooked down, I took it out of the enameled pot. I turned the heat to medium in order to brown my onions (I used a teaspoon of oil for this). Then I turned the heat back to low and simmered all of the veggies together on low for an hour and fifteen minutes.

When time was up, the veggies were all tender, and the broth from the cooked vegetables was amazingly flavorful—both salty and a little sweet. I added the tempeh back to the pot about half an hour before everything was finished, so that it would soak up the juices and so that the stew would thicken, and that worked really nicely. 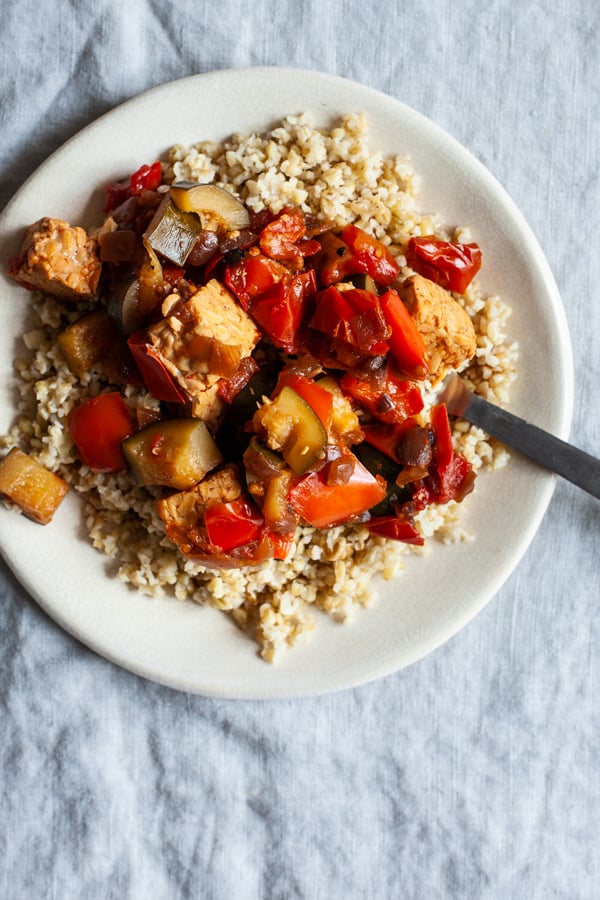 The finished ratatouille is both earthy and light. Like so many of the recipes that I’ve relied on this year, it could be served over a grain, over steamed greens, over a nice, thick slice of toast. I’d love to try it over pasta. For now, I’ve been scooping the leftovers over cooked bulgur or toast. They get more and more flavorful as they sit in the fridge. 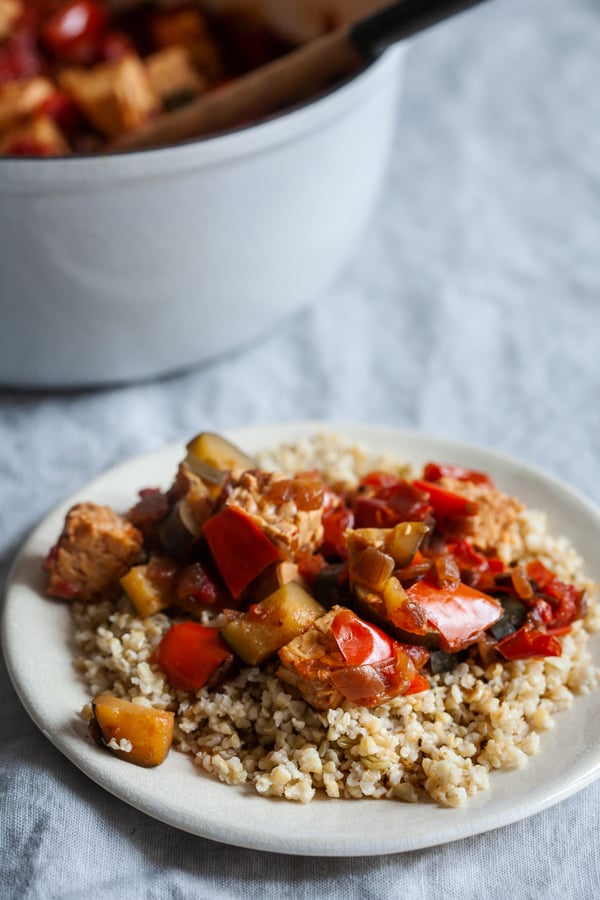 Here’s the recipe. I know that this is a newish appliance on the US market, so I’ve included instructions in the notes section for cooking on the stovetop with a regular Dutch oven (or heavy-bottomed pot). 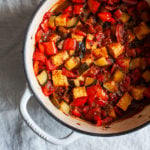 Recipe can also be prepared in a Dutch oven over medium and low stovetop settings. Begin by simmering the tempeh on low heat as instructed, removing it, and then proceed. You may wish to add additional olive oil as needed to prevent sticking and/or for flavor. 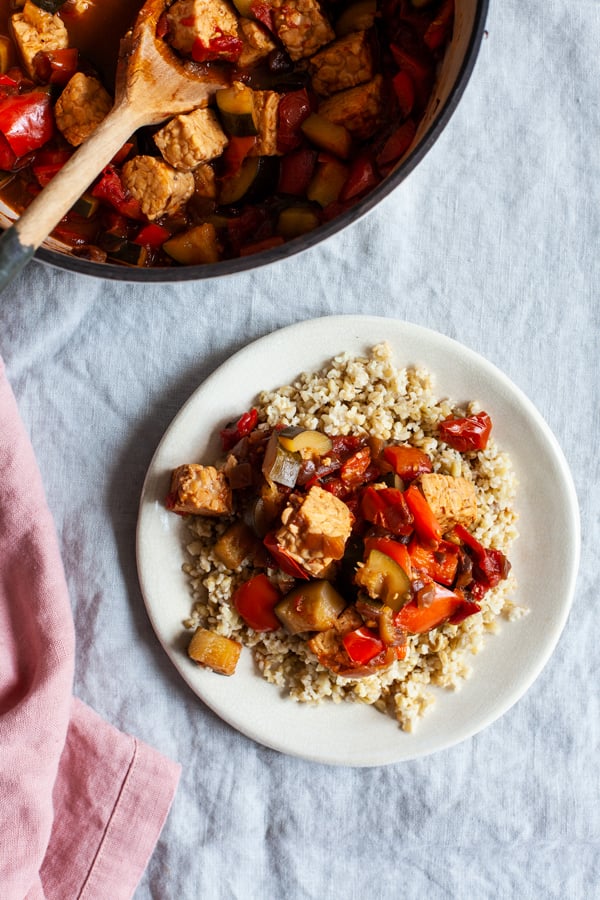 As I read back over this recipe, it struck me how simple the ingredients are, yet it’s one of the most intensely flavorful batches of ratatouille I’ve made. I’m usually pretty liberal with salt, and I was struck by how little need there was to add any extra at the end here. The musui “waterless”  cooking and tight seal really does work.

The Musui–Kamado is a significant investment, and it’s one that I wouldn’t have been able to make this year had the brand not been willing to share with me. But I’ve loved using it and feel lucky to have it. I appreciate the machine’s craftsmanship and thoughtfulness, and I’ve been impressed with how often I use it—at least a few times a week, for rice and for vegetables if nothing else. With the very hot temperatures lately, I’m turning to it more and more, as both my stovetop and my oven steam up my living space fast. And I’m excited to keep exploring what it can do. 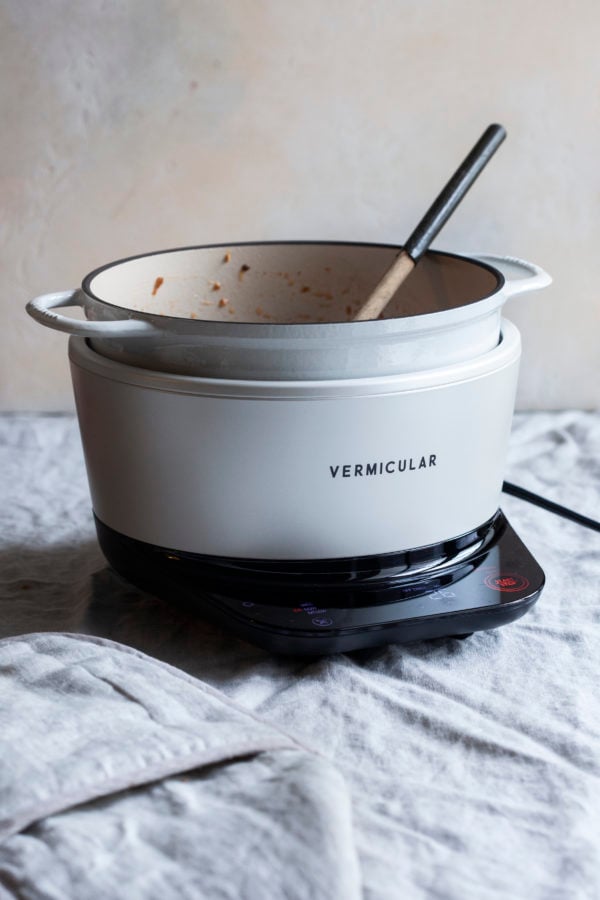 I hope you can enjoy a batch of this chunky, protein-rich ratatouille before this summer draws to a close (can’t believe it’s almost August!). And happy Friday, friends. See you this weekend.

This post is sponsored by Vermicular, and the Musui–Kamado I wrote about was provided by the brand. All opinions are my own. Thanks for your support!