It feels so strange to be typing “2015” as a part of these posts! How time flies. I hope that everyone has enjoyed this first weekend of the new year.

I’m back from Vieques, and while I miss it, I can’t say I’m not happy to be immersed in a cityscape again. It’s also a joy to be reunited with my kitchen. Like many folks, I love to mix up and invigorate my culinary routine in January, and the following recipes have inspired me already. 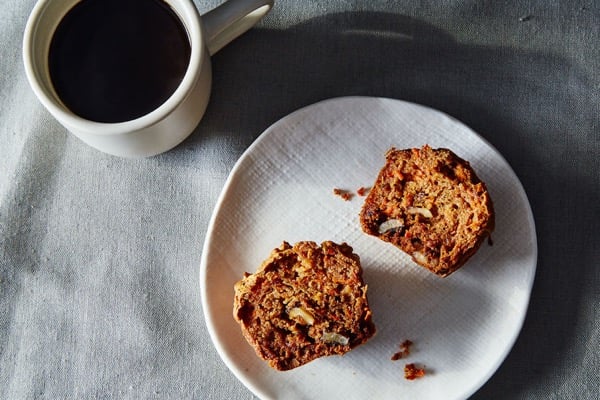 Tis the season for wholesome and delightful baked goods. These morning glory muffins from my New Veganism column are a little on the crunchy side (they’re made only with date paste, so they’re definitely not very sweet), but they’re brimming with nuts and dried fruit, and they’re a great way to start the day. 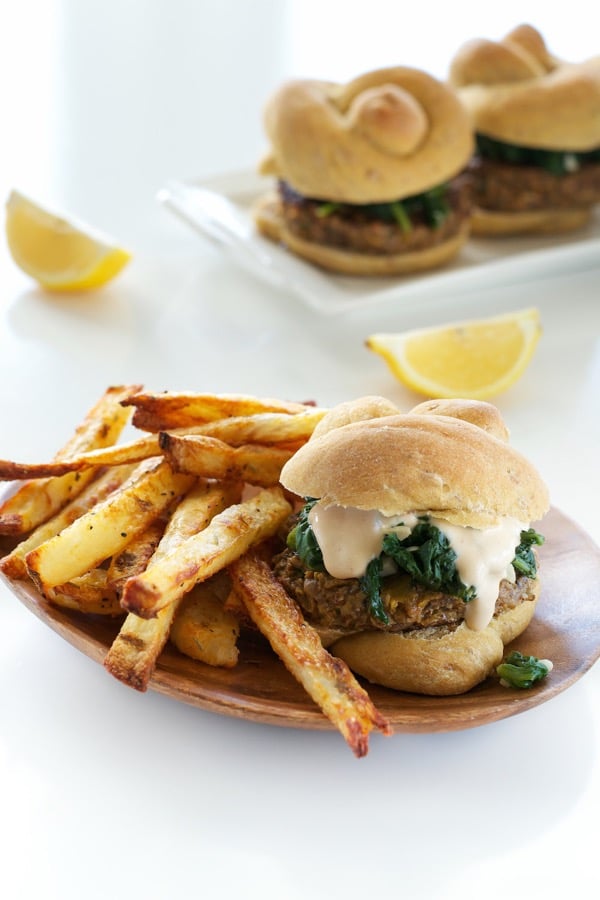 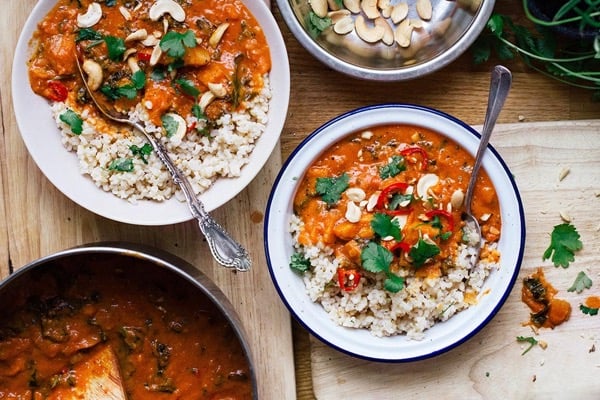 I love the taste of peanut in stews, so it’s no surprise that I’m absolutely salivating over Rika’s Cashew Peanut Stew with Roasted Butternut Squash and Parsnip! 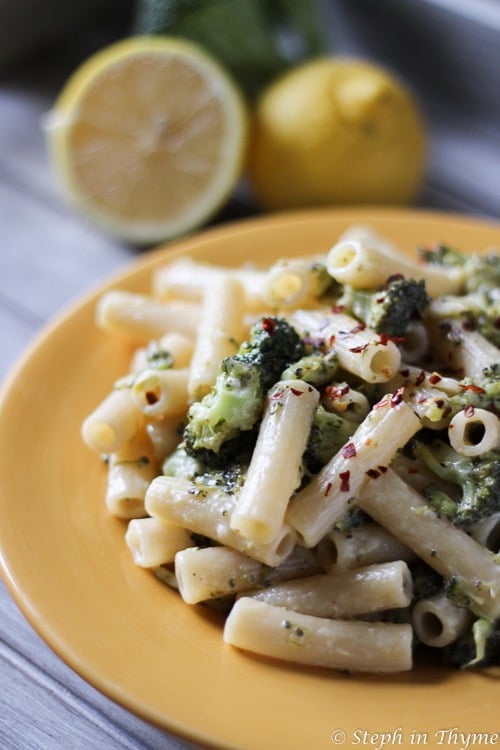 My boyfriend, the pasta lover, is going to flip out when we sample this tasty recipe for rigatoni with lemony broccoli. 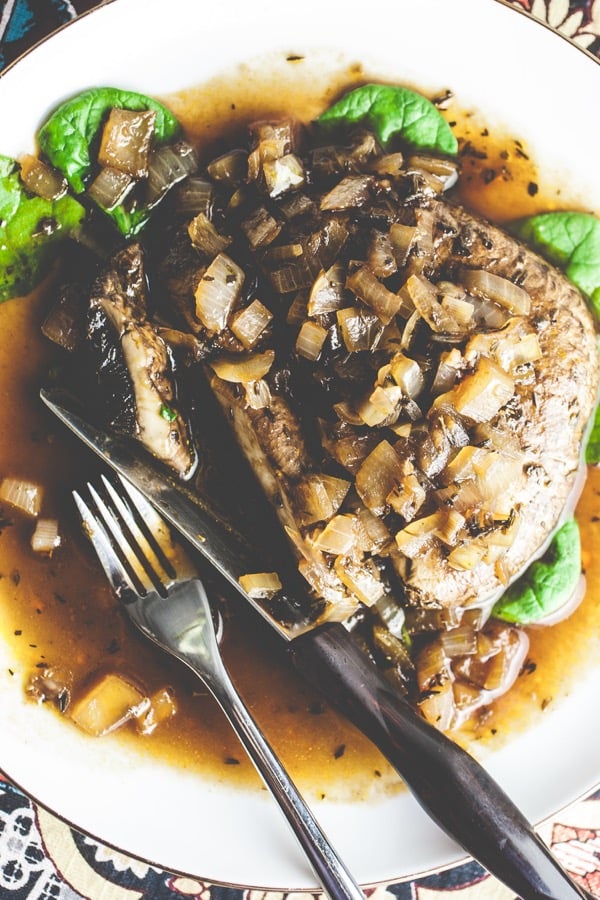 1. Hope a bunch of you saw this awesome profile of Ethan Brown, the CEO of Beyond Meat. I’m a huge fan of these guys and their mission, and I was psyched to see such extensive coverage of their product. One thing I liked about the article was that it anticipated the “Frankenfood” critique. As I’ve mentioned before, I disagree strongly with categorical claims that all plant based meat replacements are Frakenfoods. For one thing, it isn’t fair: as Brown himself notes in the article, most of the newer faux meats are made with very wholesome ingredients. It also misses the point of these foods, of course, which is to spare the lives of animals.

One might argue “why faux meat?” Why not just eat lentils and nuts and grains? Well, these foods might not provide the same familiarity of texture and taste that faux meats (or cheeses, or yogurts, etc.) do. I’m the first to claim that homemade cashew cheese is every bit as delectable as goat cheese, but I’m also well aware of the fact that a nice sprinkling of melted Daiya on top of a veggie burger or a vegan pizza hits the spot in a way that some of my own pantry staples don’t. I’m so glad that these products exist, because they allow vegans to enjoy a compassionate diet without feeling that they’ve surrendered too many of their familiar favorites. And there’s also a lot to be said for convenience, because not everyone who wants to eat more plants will necessarily love to cook.

The author of the article sums this up perfectly:

Why turn plant proteins into burgers and dogs? Why not just eat them as peas and soybeans and seeds? To which I say: taco, chimichanga, empanada, crepe, pierogi, wonton, gyoza, stuffed roti, pupusa, pastie, pig in a blanket, croque monsieur, pastrami on rye. Culture is a lump of flesh wrapped in dough. If you want to save the world, you’d better make it convenient.

2. An interesting look at the lengths that scientists around the world must go to to obtain research permits.

3. A fascinating article on “plantibodies,” antibodies in plants that could be used to create a wide array of life-saving drugs.

4. I had mixed feelings about this article on the evolution of emotion, which is also an article about animals’ emotions and how that impacts our sense of self as humans. On the one hand, I’m always fascinated by firsthand accounts of animal behavior (in this case, observations of chimpanzees, gorillas, and lions in Africa). On the other hand, I was troubled by the nature of some of the research being done to explore animal emotion (which amounts to torture). Even if that’s sort of besides the point–not the author’s concern–it’s always a struggle for me to read about the kind of brutality involved in these experiments. I also thought that the author contradicted himself at times, wavering between a focus on animal empathy and adjacent assertions about the unthinking nature of animal behavior (in fairness, these assertions usually had a sensible context). Anyway. Interesting.

5. This isn’t an article that I can link to, but I do want to recommend Elizabeth Kolbert’s The Sixth Extinction: An Unnatural History.

The premise of this book, which reads like a thriller even if it’s science journalism, is that there have been five mass extinctions in known history, and that we are in fact in the midst of a sixth–more subtle in some ways than the others, but equally potent. The cause? Human beings, the “weedy” species that has, through hunting, deforestation, and pollution managed to wipe out a tremendous amount of biodiversity in a relatively infinitesimal amount of time. The book is structured into thirteen chapters, each of which describes a bygone species and uses that species’ extinction story to talk about the ways in which have–and perhaps have always had–a violent relationship with the natural world around us. It is grim, but it is fascinating, and if you care about animal rights, I think you’ll find it to have a particularly strong impact.

This week, a nice long Vieques recap, not to mention a return to my kitchen! Hooray. I wish you all a lovely night.

As you can see, it’s been a busy weekend over here! For a long time I’ve been hoping to make this blog more user-friendly. It’s been my intention to offer more easily searchable recipes, useful resources, and a brighter, cleaner design. I’m so happy to introduce you to the new look on this wintery Sunday afternoon. If you start to poke around, you’ll find that recipes can now be searched according to dietary preference (gluten-free, tree nut free, no oil, etc.) or meal…

Happy Sunday, folks. Thank you for all of the kind words and feedback during NEDA week. It’s always a pleasure to write those posts and to hear your insights. This week will have a new and different theme: I’ll be completing the SNAP food challenge. This is an assignment for my Community Nutrition class, and the purpose is to shed some light on what it feels like to live with food insecurity. I spoke more about the challenge in this post, but the…

I was so saddened to hear on Friday that Fatima Ali, a former Top Chef contestant, had passed away after a year-long battle with Ewing’s sarcoma. It’s been a long time since I tuned into Top Chef, but I’d learned about Chef Ali when she contributed this essay to Healthyish. She wrote it when her cancer had already been deemed terminal. It’s a funny, strong, humble meditation on how she intended to approach her remaining time. The following quotation has been shared widely…