You may have heard that Google Maps just pulled an experimental feature that told users how many calories they’d burn if they walked to a destination instead of driving. The feature was intended to promote exercise and greater awareness of energy balance, but pushback from eating disorder treatment professionals—as well as troubled consumers—turned the tide.

The app not only showed the caloric deficits associated with walking, but it also framed these deficits in terms of food: for example, it would inform users that a certain walking distance “burns around 125 Calories—that’s more than 1 mini cupcake!” (Mini cupcake icon included.)

Reading about the controversy, I was brought back to anorexia recovery, when my commitment was constantly tested by our cultural focus on weight loss. I did my best to eliminate the triggers I could: I stopped reading certain blogs, I stopped purchasing most women’s magazines, and I consciously excused myself from passing conversations that were focused on dieting or exercise.

Eventually I realized that it was impossible to hide from diet talk and food noise. Instead, I would have to train myself to handle them.

It took me years to understand that exposure to diet culture hadn’t just triggered me; it had also brought to the surface a lot the anger I was carrying around about my recovery process. I told myself that I was angry at a cultural dialog that condones body shaming, and this was part of the truth.

The whole truth is that I was also angry to not to be a part of this culture anymore: the rituals of starting a new diet, having a new “thing” with food, monitoring my body’s inputs and outputs. Those rhythms had ruled my life for so long, and I felt lost without them. To indulge them, I knew, would be a rejection of the healing process I had committed to. I could distance myself from them, but I couldn’t help envying those who didn’t have to.

At that point, I needed recovery a lot more than I wanted it. Things changed. Eventually I would discover how liberating it is to hop off of the dieting roller coaster for good. I would realize that I’m entitled to eat simply because it keeps me alive, and it tastes good, not because I’ve burned off so many calories exercising or walking. I stopped defining my diet in terms of what I avoided, and I stopped flirting with shiny new restrictive experiments or food eliminations.

Back then, calorie and activity tracking were still specifically associated with weight loss. Nowadays, tracking has become a lot more normalized, thanks to apps and Fitbits and the like. You don’t have to identify with being on a diet to monitor how many calories you burn in a fitness class, or how many steps you’ve taken over the course of a day.

I have to wonder the impact that the mainstreaming of activity/food tracking has on men and women in ED recovery, not to mention anyone who’s susceptible to fluctuations in body image. It pains me to think that there are more triggers than ever, even though I understand why these programs, apps, and devices exist and see their potential value.

As the Times article notes, consumption of high-calorie, low-fiber foods and inactivity are major health threats in America. While it would be nice to think that our epidemic of lifestyle-related diseases could be combatted exclusively through mindfulness, I know that’s a lot to ask. Forging a conscious relationship with food takes time, energy, and emotional investment, whereas tracking promises dependable and timely results: do the math, stick to a plan, and you’ll get the results you want.

I’m glad that Google pulled the maps feature, because it wasn’t elected: users were forced to see theoretical calorie burns whether they opted to or not. I think ED treatment professionals were right to intervene, and I’m not surprised that many consumers reported feeling shamed by the app. At the same time, I don’t condemn tracking programs, so long as they remain voluntary. I know that they help some people, and so long as that’s true, I’m glad they’re out there.

A huge part of ED recovery is learning to accept one’s own health needs without having to generalize them. You can’t create a trigger-free world for yourself, and you can’t police the way that other people experience food, exercise, or body image. Tracking and calorie counting work for some people, and dieting can be an appropriate health choice, depending on the circumstances. Those who have suffered through disordered eating may always need to create strong boundaries around these topics, and that’s OK. But it’s personal.

I kept coming back to this thought as I read about the Google maps controversy over the weekend. I was less interested in the controversy itself than in the question of how we can all navigate an increasingly BMI-focused world while honoring our bodies.  I was reminded that my ED recovery would not have been possible without my learning to identify and protect my needs while letting go of the expectation that my environment would ever make it easy.

Today, I want to offer up strength and encouragement to those of you who might be experiencing anxiety, triggers, shame, or any other tensions as you navigate the journey toward body respect. We dwell in a complex food environment, and we’ll continue to see a lot of proposed solutions in the coming years. Most of them will be well-intentioned, and some of them might be tone deaf or have unintended consequences. The best any of us can do is to stand by ourselves and our unique relationships with food, trusting that intuition will guide us toward the tools that serve us best.

On that note, here are some of the recipes that have called out to me in the past week. 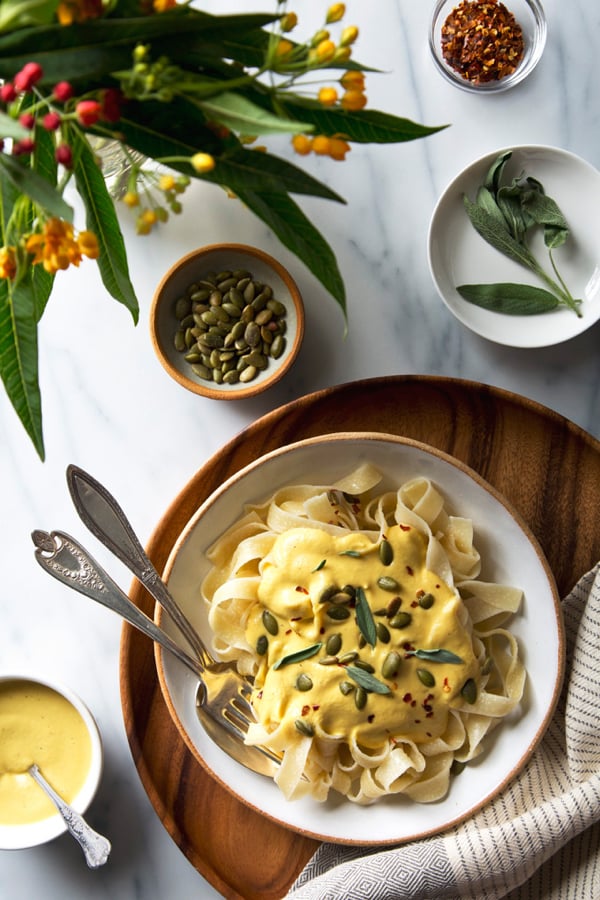 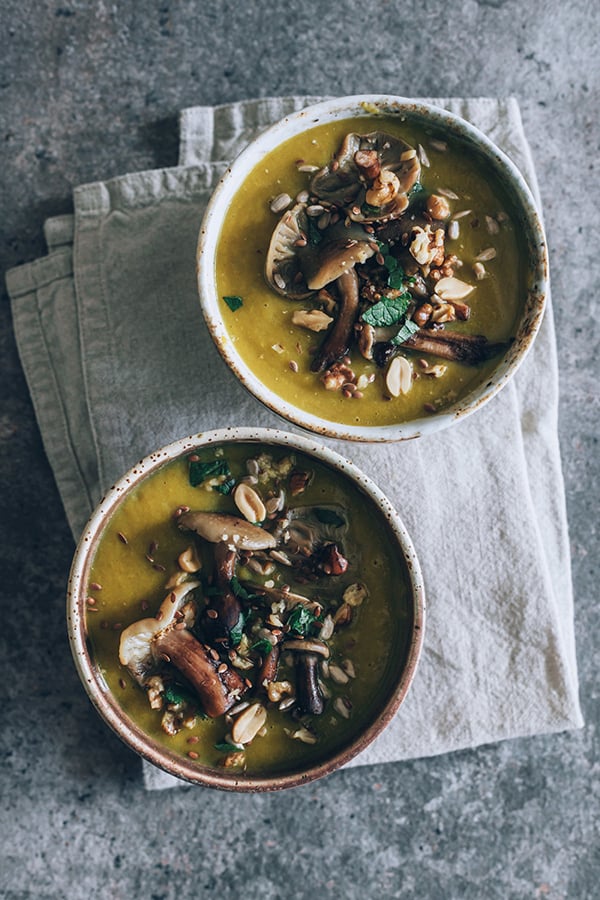 This mushroom soup is so nutritious, packed with vegetables, white beans, and turmeric. Just the thing to fend off a fall cold with (though fingers crossed we all manage to escape those this season). 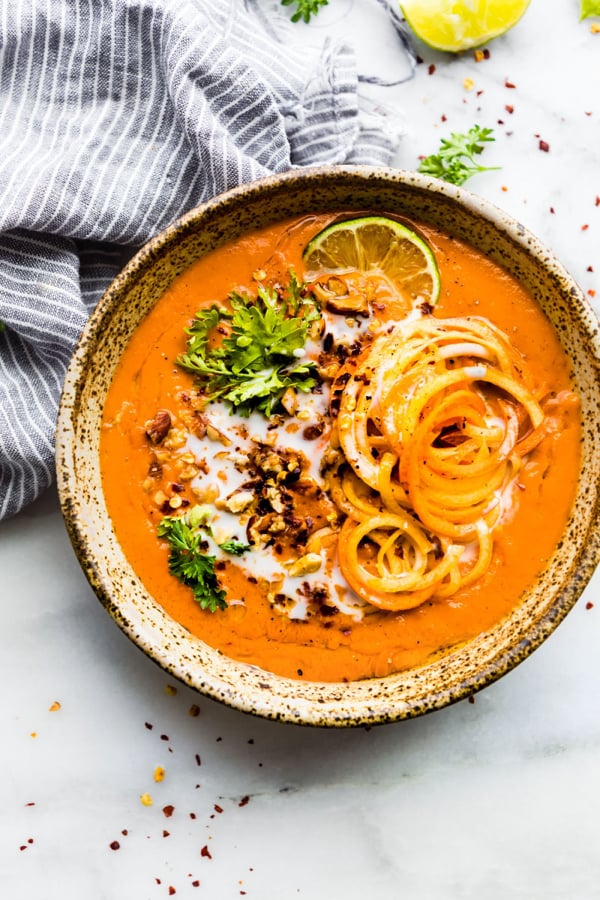 Another soup, this one of the blended/creamy variety. I love how flavorful Lindsay’s Zanzibar carrot tomato soup is; it’ll be a great way to satisfy my love of tomatoes once the fresh ones are out of season (sniffle). 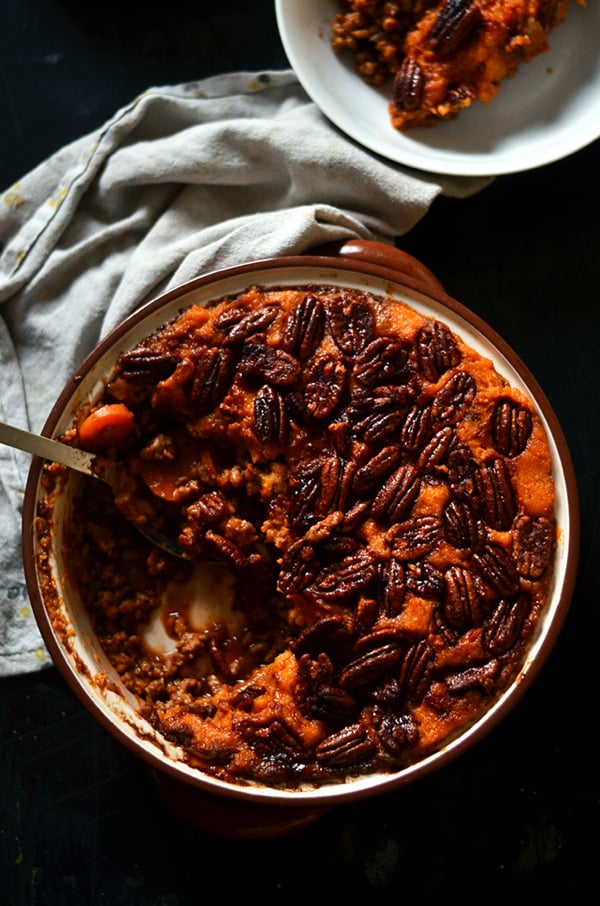 My mind is already inevitably turning to Thanksgiving ideas, and I’m so inspired by Rosie’s maple pecan sweet potato pie. It’s a true sweet and savory hybrid—she describes it as a sweet potato pie and shepherd’s pie hybrid—which is right up my flavor alley. 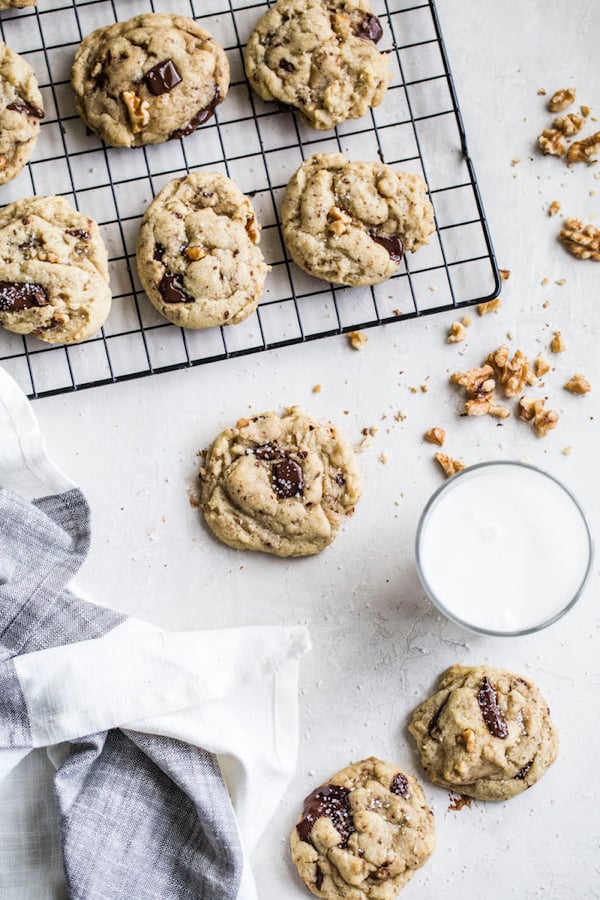 2. Joanna put this series of photographs on my radar. Artist Conor Nickerson photoshopped current images of himself onto childhood photographs, creating a series in which his child and adult selves are hanging out. I think it’s a such touching idea, almost a visual rejoinder to the hypothetical of what we’d tell our younger selves if we had a chance.

4. Many vegans consciously elect to work with vegetarian or vegan RDs, but doing so isn’t always an option, especially if the client prefers to meet in person or has limited options on a health insurance plan. I’m so glad that Matt Ruscigno has contributed this article, a primer on working with vegan clients, to Today’s Dietitian.

Matt doesn’t only address things like B-12 supplementation or meal ideas; he also encourages non-vegan RDs to be sensitive to the fact that there are many motivators for choosing a vegan diet, to ask lots of open, curious questions, and to ask about the healthcare practitioners clients may already be gathering information from online. Great information for the dietetic community to have at its fingertips.

5. Good news for transparency in scientific literature: PubMed will now display information on conflicts of interest and funding right below abstracts. This information is generally disclosed within a paper, but many consumers get information from abstracts, especially if they don’t have subscriptions or access to full articles online. It’s an especially strong step forward in making the public aware of nutrition studies that are funded by industry.

Enjoy the food, enjoy the reads. I’ve got a comfort food dish on the way in a day or two, and I’ll be sharing a flavorful recipe (and giveaway!) from Richa‘s fabulous new cookbook on Friday.

Welcome to a Monday edition of weekend reading! To those of you who were observing the Thanksgiving holiday this past weekend, I hope that you’re easily settling back into the swing of things. With December just around the corner, I’ve been thinking about the holiday season and its various meanings. The winter holidays are presented as a time of togetherness and celebration, but what’s often left unsaid is that they can be quite lonely, too. This could be true for any number of reasons: perhaps…

Tomatoes were my favorite food as a child, and my attachment to them has never really gone away. I look forward to them being in season all year long, and I celebrate their appearance more than any other summer produce. Unlike many vegetables, for which I’ll have a strong preparation preference (broccoli steamed; cauliflower roasted; spinach raw) I’ll take tomatoes raw, roasted, sautéed, or sauced. It’s all (so, so) good. Tomatoes are finally teeming at markets near me, and I’m gorging in the…

Happy Sunday, friends. A lot of you have already tried this past week’s curried tahini pasta salad and given it a thumbs up, which makes me so happy to hear! I’m already excited to make it again. I’ve spent the last two days catching up on all of the stuff I didn’t take care of while I was wrapping up my spring semester: unanswered emails, chores, errands, cleaning, that sort of thing. There won’t be much of a breather this year, as my…