I had such high and hopeful intentions to post this weekend reading before today, so that everyone could bookmark the Super Bowl recipes I’d picked out. Work got in the way, and I’m the worst. But you should still bookmark them, because even if you don’t have time to prepare them today, these vegan dishes are show-stopping, hearty, colorful, and absolutely delicious. And beneath them, you’ll find the articles and posts that piqued my interest this past week. 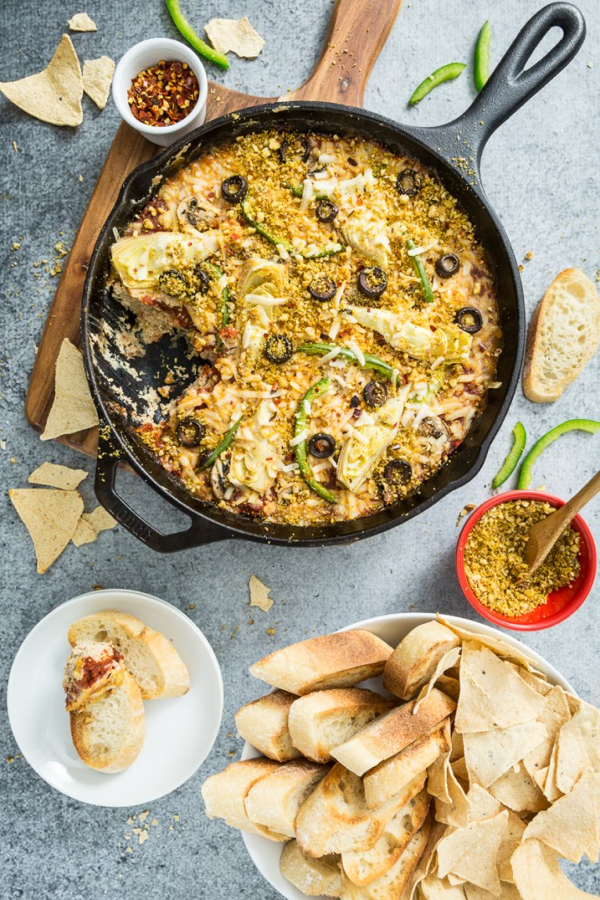 If you ask me, dips are definitely the best part of Super Bowl noshing. Two in particular caught my eye this year. The first is Kristy’s magnificent pizza dip, pictured above. I’m waiting for Steven to see this and freak out. 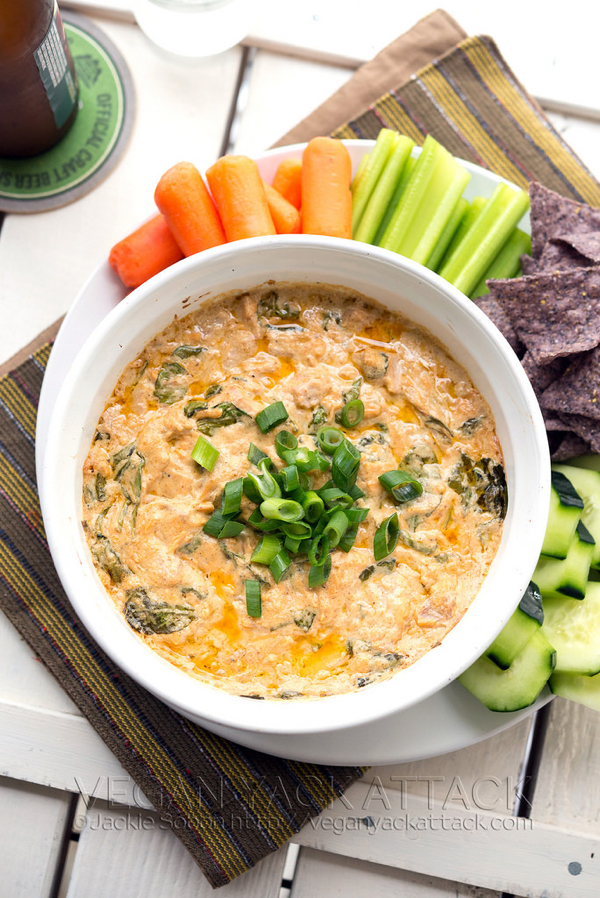 The next is Jackie’s buffalo jackfruit spinach dip , which looks better than any spinach dip I’ve seen before. I still haven’t tried jackfruit — what’s wrong with me?? 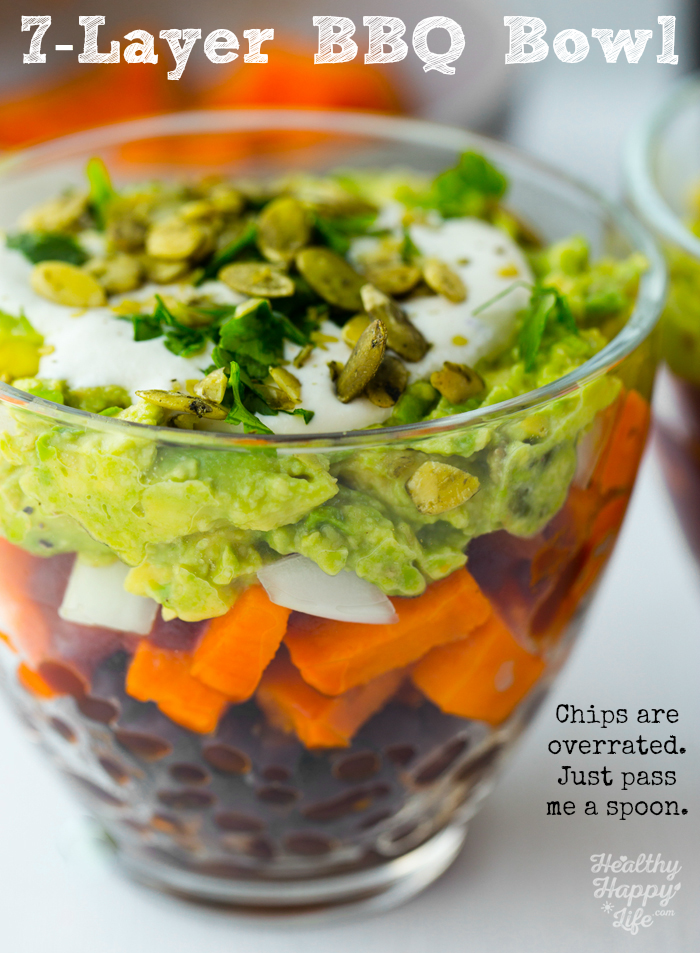 I agree with my friend Kathy that chips are overrated. I can happily eat most dips (especially cashew queso or hummus) with a spoon, and I could definitely dig into her layered BBQ bowl with a spoon! So much texture and color here. 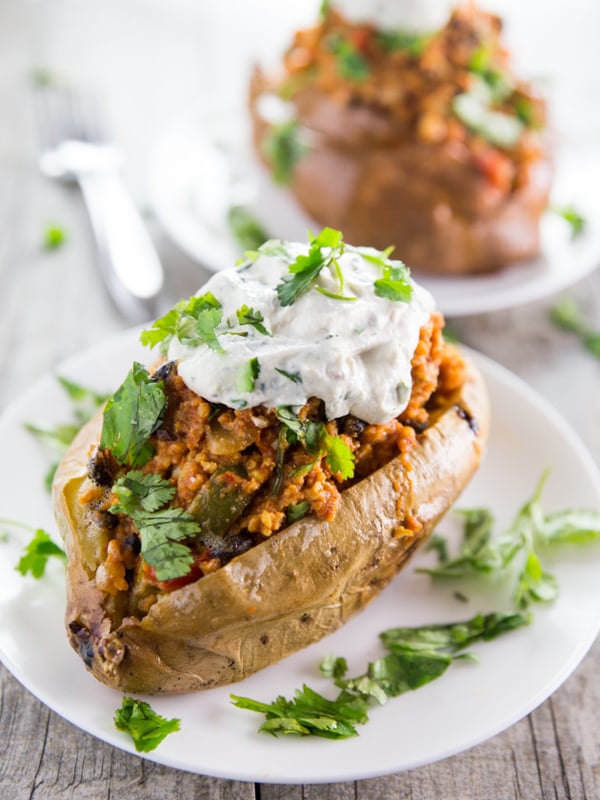 I don’t even know where to start with Katie’s enchilada millet stuffed sweet potatoes with garlic cilantro cashew cream. OK, how about here: I love stumbling upon new millet recipes. It’s an underutilized grain, and I’m always on the hunt for fresh ways to prepare it. Also, Katie, you had me at cashew cream. And sweet potato. 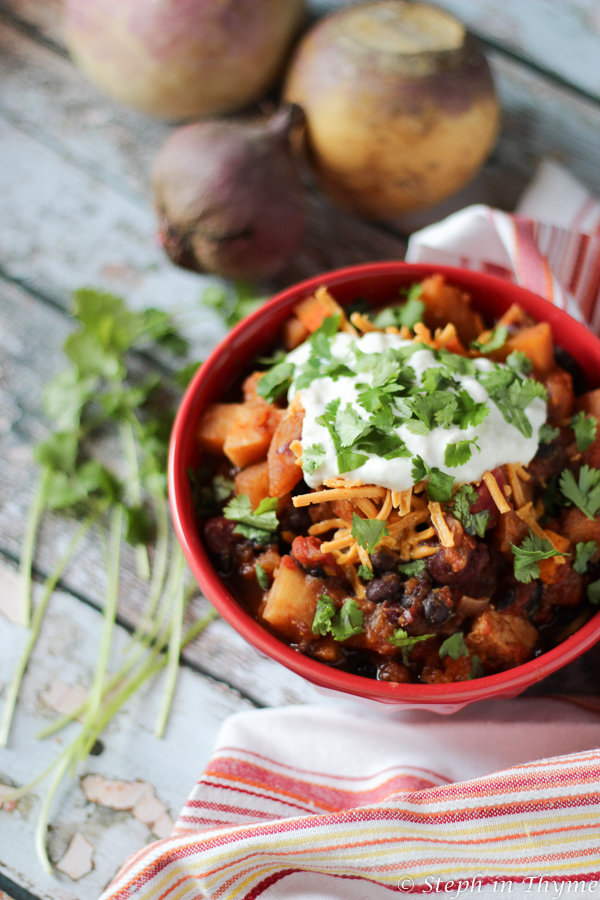 I’ve made all tempeh chilis before and found that they had almost too much umami and nuttiness for me. Steph’s root vegetable and tempeh chili looks like a perfect balance between tempeh and warm, soft, sweet root vegetables–so delicious and filling!

1. I thought this article about the use of nanotechnology in medical applications–specifically, the creation of microscopic robots that may be able to deliver drugs with extreme precision–really cool. Even cooler that some of the nanobots mechanical power was modeled after the flagellum of E. Coli bacteria!

2. An interesting article about an MIT professor who wrote a blog post that touched upon his relationship with feminism, and the heated comments that ensued. This is not really an article about food or health or wellness, but it is an article about the kinds of dialogs that can happen within the comments section of blogs (or in response to blog posts), and for that reason it struck a chord. Regardless of how you feel about the debate that the professor, Scott Aaronson, began, or about the responses he got (including one compelling rejoinder from The New Statesman‘s Laurie Penny), the article invites us to think about the nature of putting ourselves out there online, instigating debate, and opening up about our histories and perspectives.

As I read these three essays, along with commentary by many other participants in the conversation (which is too sprawling, rich, and complicated to summarize here), I felt blessed to have stumbled on brilliant, earnest individuals willing to share their life experiences and insights, all in hopes of improving the world. Since we can live together more easily when we understand one another’s perspectives, these exchanges alone brought real gains—for the individuals involved, to be sure, but I suspect that their readers will gain even more. The intensely painful effect that a strain of feminism had on Aaronson may render him unable to fully appreciate that movement’s value to its members, and the degree to which it is intended to speak to and benefit a close-knit community, not to affect outsiders. Similarly, feminists who’ve suffered particularly intense sexism and found solace, insight or strength in that movement may never fully understand or empathize with the complicated, varied, at times negative effects it has on some outsiders. But readers without strong personal reactions to movement feminism can dispassionately glean insights about the communities that we build, communities that exclude us, and how to negotiate such boundaries.

Admittedly, understanding one another’s viewpoints only takes us so far. Aaronson, Penny, and Alexander also have what are ultimately empirical disputes about whether women in society, and specifically in tech, face more overall obstacles, and if so, whether men in tech are to blame, generally speaking. Empathy won’t resolve those disputes. But perhaps we needn’t resolve them.

Blogging presents us with a particularly charged kind of debate, because many blogs aren’t only dedicated to intellectual engagement with issues. They’re also highly personal spaces, wherein bloggers channel personal experience into their writing. This intimacy can make blog dialogs uniquely intense, but it also enriches them and gives them complexity. I agree with Friedersdorf that resolution isn’t always–or even frequently–the point; sometimes the point is for folks to have a safe and open space in which to speak out, and that the more of those we create, the better.

3. This isn’t really an article, but Ecorazzi put this New Yorker cartoon by Farley Katz on my radar, and it’s so great. Available for purchase in print form, too.

4. I guess it was only a matter of time: there’s now a Skype translator that, according to this article in the MIT Technology Review, “is being widely compared to the “universal translator” that Captains Kirk and Picard used to effortlessly communicate with alien interlocutors.” The article goes on to talk about the human subtleties that the program can’t seem to capture, which is as worth reading about as the technology itself.

5. I don’t know what I can say about this article in Modern Farmer, which is all about the potato, except that you should read it. It is a long, sprawling, fascinating narrative about one of our most maligned vegetables (the white ones are widely regarded as unhealthy, and as the author notes, a great many foodies also think of them as being blander and less interesting than other roots). I don’t mistrust or look down upon the potato, exactly, but I do find myself choosing other tubers (rutabagas, parsnips, squashes) far more regularly, and almost always purchasing sweet potatoes over white. By the time I finished this article, I was ready to give potatoes a much closer second look.

On that note, friends, I’m signing off. I’ll be returning with a vegan casserole that’s destined to become a staple for me (and the boy!). Till soon.

Good morning, and happy Sunday. I’m thrilled to see that so many of you are interested in the Hamilton Beach 6-quart slow cooker giveaway–keep those entries coming! And I was even happier to see that so many of you liked my masala lentil recipe. I’ve got leftovers in my fridge and my freezer, and I couldn’t be happier about it. It’s the first of November, and I’m absolutely astonished at how quickly the fall has been flying by. I tend to feel as…