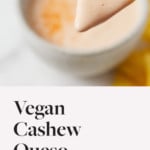 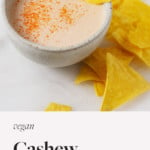 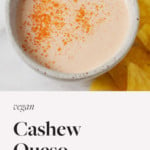 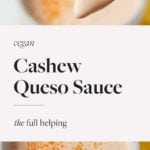 This recipe for vegan cashew queso is pure magic and extremely versatile. It’s tangy, a little sweet, and it has the perfect amount of spice. Using pre-soaked cashews, it’s ready in five minutes!

This take on vegan nacho cheese is everything I want in a dip or a sauce. It has lots of flavor is super versatile. It’s easy to prepare, and it freezes really well.

I’m a big believer in the power of a good sauce.

A good sauce recipe transforms a simple vegan bowl into something craveable and layered. Flavorful sauces can instantly uplift tacos, burritos, sandwiches, and pastas. They double as flavorful dips for chips, vegetables, and toast points.

I love vegan sauces so much that when I was working on Power Plates, the sous chef who helped with food prep for photo shoots nicknamed me “sauce boss.”

Sauce, dip, and dressing recipes were a focus of Choosing Raw, too. I included fifteen of them in the book: an entire chapter’s worth of things for dipping and drizzling.

It would be hard for me to pick my top five favorite sauces or dips. But if I were given that task, this cashew queso would be in a top-ranking spot.

How to make a creamy vegan queso

Cashews are hands-down the best way I know of to create rich, creamy sauces without dairy.

Cashew nuts are buttery and slightly sweet on their own. Their mild flavor works well in both savory and sweet recipes. Cashews can be a creamy base for:

Cashews create all of that luxurious, creamy texture without adding significant amounts of saturated fats to recipes. And tree nuts, cashews included, are associated with a number of health benefits, including improved blood lipids, reduced inflammation, and cardiac health.

Beyond cheesy flavor: the benefits of nutritional yeast

Cashews are responsible for the creaminess of this cashew queso. Meanwhile, nutritional yeast is to thank for its cheesy flavor.

I love the cheesy, umami-rich flavor of nutritional yeast. Truth be told, I could eat it by the spoonful. Most of the time, though, I use it to season any plant-based recipe that calls for “cheesy” flavor.

That’s what nutritional yeast does in recipes. It gives them a cheesy taste, as well as an intense savoriness.

Nutritional yeast has more to offer than seasoning. It’s also a great source of nutrition for vegans.

Primarily, it’s rich in B vitamins, as most varieties are fortified. It’s a source of vitamin B-12 (though vegans who eat nutritional yeast regularly will still need a B-12 supplement).

Nutritional yeast is also a good source of dietary fiber, which is important for digestive health and hearth health.

In addition, nutritional yeast—or “nooch”—is a good source of plant-protein for vegans. Two heaping tablespoons of nutritional yeast contains about 8 grams of protein. This is a good amount, especially when it’s combined with other protein-rich foods within meal.

Nutritional yeast and cashews create the backbone of this sauce. A few other key ingredients help to build its flavor.

Tomato paste does a few things in this cashew queso sauce. First, it adds just a touch of both sweetness and acid. The sauce doesn’t taste like tomato by any means, but without the tomato, it’s less bright and vibrant.

Tomato is also a good source of umami, which helps to enhance the sauce’s savoriness and—by some accounts—deliciousness.

Chili powder helps to give the sauce some spice. You can choose a hot or a mild chili powder, depending on your preferences and what you have at home.

The recipe uses smoked paprika, or pimenton, for some smoky flavor.

Lemon juice adds a touch of tart acidity to the sauce. If you’re out of fresh lemon juice, you can use lime juice or a few teaspoons of white vinegar instead.

The queso sauce will keep in the fridge for up to five days. It’s a great sauce to include in your weekly meal prep! I usually make at least one sauce or dip as part of my own batch cooking, and it’s often this one.

Better still, cashew queso can be frozen for up to six weeks. If you don’t think you’ll use an entire batch, or if you’d like to double the recipe and have some extra for later, freezing the sauce is the way to go.

When I freeze this queso or other vegan dips, I usually put them in mason jars. It can be hazardous to freeze glass containers if they’re filled to the brim (liquids expand as they freeze), but I’ve had no trouble freezing in mason jars when I leave an inch or two of space at the top of the jar before sealing.

This vegan nacho sauce is so versatile. It’s a fabulous dip, but there are so many other ways that you can use it.

Here are few of my favorites meals and recipes to use the cashew queso in or on: 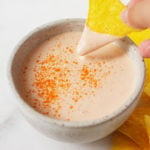 Happy dipping and drizzling and topping, everyone!