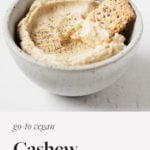 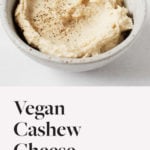 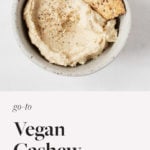 My go-to cashew cheese recipe allows you to whip up a creamy and delicious vegan cheese at home. Quick and easy—no fermentation required!

Those of you who have been reading this blog for a while know that I have a slight obsession with all things cashew. And especially cashew cheese.

Cashew cheese has found its way into countless vegan lunch bowls, salads, pasta recipes, and and sandwiches. I spread it on crackers when I’m feeling snacky. It has been the base of countless vegan toast meals.

When I mention cashew cheese to my clients, they often counter that it sounds like a lot of work. But making cashew cheese at home is really as simple as making hummus or bean dip.

Today, I’m sharing my go-to cashew cheese recipe. It’s the one I return to again and again. It’s flavorful, fast, and it doesn’t require any fancy home fermentation. I hope you’ll come to rely on it as much as I do!

What appliance do I need to make vegan cashew cheese?

There are different approaches to making cashew cheese. Some folks like to use a high speed blender. Personally, I find that you have to add a lot of liquid to make the cheese blend properly in a blender.

So, I like to use my food processor when making my go-to cashew cheese. This creates a texture that falls someplace in between ricotta cheese and hummus.

When I was working on Food52 Vegan, my editors asked me a few times about the consistency of cashew cheese. To some extent, this is a matter of preference.

You might want to create a loose, creamy cashew cheese for folding into baked pasta. On the other hand, you might prefer a really thick batch to crumble onto salads.

But for the most part, what you want to whip up in the food processor should resemble a thick batch of hummus. It should be uniform and creamy, but the texture won’t be silky smooth.

Another way to think of this go-to cashew cheese recipe is as a savory cashew butter. That’s sort of what it is: it won’t crumble as neatly as, say, feta. But you can definitely dollop it on top of any dish that you’d usually add a crumbly cheese to. And it’s perfect for spreading.

Blending the cashew cheese in your food processor will require a little patience. It’s not like making nut butter, which can take up to ten minutes of processing, in my experience. But it won’t be the right consistency right away.

Once you start blending the go-to cashew cheese as instructed, give it some time. Stop often to scrape the processor down, then start it again. After a few minutes of this, the cheese will be ready.

Once you prepare the go-to recipe I’m sharing today, you can start to get creative.

For example, you can modify the go-to cashew cheese by adding your favorite herbs. I like to pulse in dill, chives, thyme, and herbes de Provence. You can add spices, too, such as garlic powder, a pinch of curry, or some smoked paprika.

Dried fruit, especially cranberries, can also be a great mix in if you chop them finely first. Other creative additions that I’ve experimented with include:

How long will cashew cheese keep in the fridge?

Your cashew cheese should keep for about 5 days in an airtight container in the fridge.

With that said, I’ve had some batches get a little sour sooner than 5 days. I’m not sure why this is; it may have to do with the batch of cashews I use, or maybe it’s random.

If you don’t think you’ll eat your cashew cheese within five days, that brings me to the next question…

Can I freeze cashew cheese?

Absolutely! I love the fact that cashew cheese can be frozen. It makes it easy for me to double the recipe below, enjoy one batch now, and freeze another batch for later on.

Having cashew cheese that’s ready-to-defrost means that I can whip up creamy vegan pastas, savory toasts, enchiladas, quesadillas, and cheese-studded salads at a moment’s notice.

I use cashew cheese as a meal “hack” in lots of different ways. My latest favorite is to warm up marinara sauce (store-bought!) for pasta and stir in a few tablespoons of cashew cheese. It’s a quick, simple makeshift pasta a la vodka.

Recipes for your go-to cashew cheese

Cashew cheese is so versatile. You may find lots of quirky ways to serve it. But to begin, you can use it wherever you might use traditional goat cheese or crumbly/spreadable cheese.

Some of my favorite recipes for using my go-to cashew cheese: 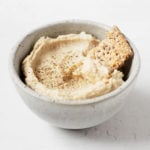 Hopefully this post will inspire you to add homemade, vegan cashew cheese to your own list of go-to condiments.

Once you get in the swing of making it at home, you’ll find yourself wanting to put it in just about anything and everything. (Tonight, I’m planning to stir some into a batch of savory oats–why not?)

Enjoy your cashew cheese adventures, everyone!