Happy Sunday, everyone! It was a sparse blogging week, and it feels nice to be checking in. I hope you’ve all had an enjoyable weekend so far.

I’m now only one exam away from the end of my Advanced Nutrition II class, nearing the end of fieldwork for my community nutrition class, and in the final two weeks of a hefty freelance project. Things are busy, but the end of this stretch is most definitely in sight. As I make my way through it, I’m staying inspired with recipes and thought-provoking articles. 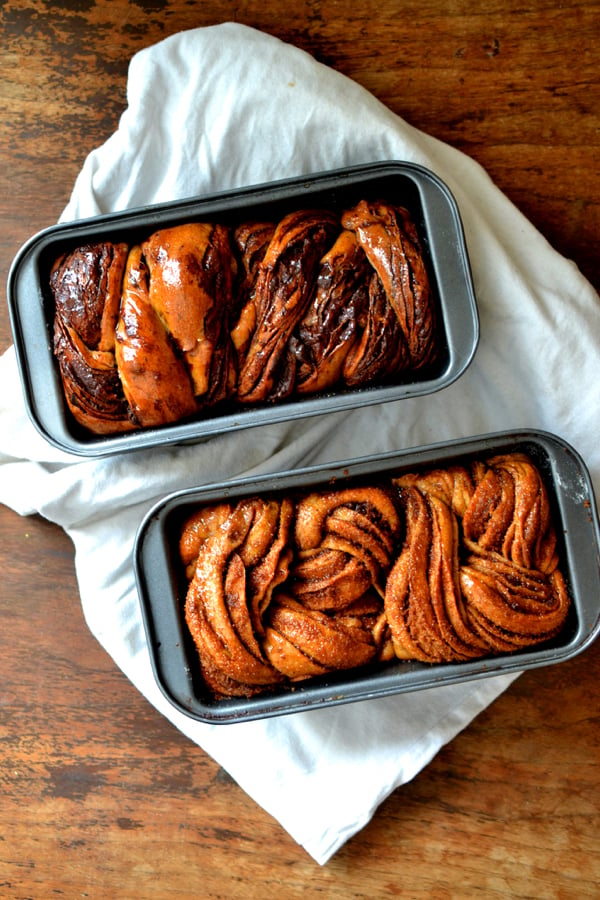 First up, I couldn’t be more impressed by Emmylou’s homemade spelt babka! It’s gorgeous, and Emmylou offers not one, but two flavorful filling options. I don’t know that my baking skills are up to snuff, but I’m tempted to try it when finals are behind me. 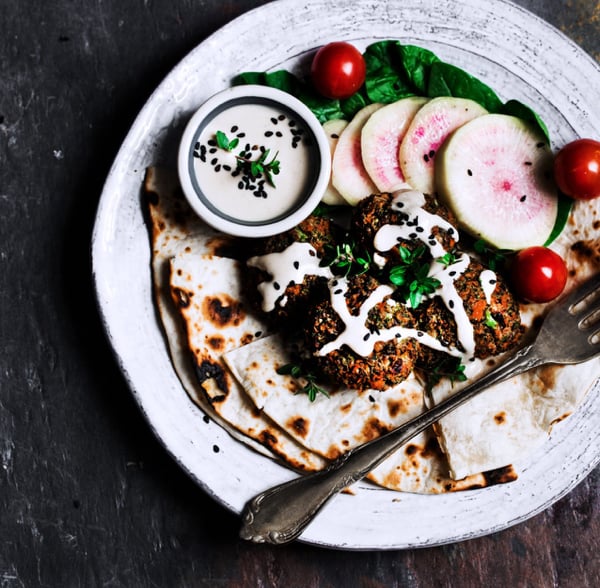 Maya’s baked veggie balls aren’t falafel, and they aren’t veggie burgers. They’re simple, versatile veggie and bean balls that you can serve with pita, pasta, a grain bowl, or a salad. I love this recipe, and I look forward to making it soon. 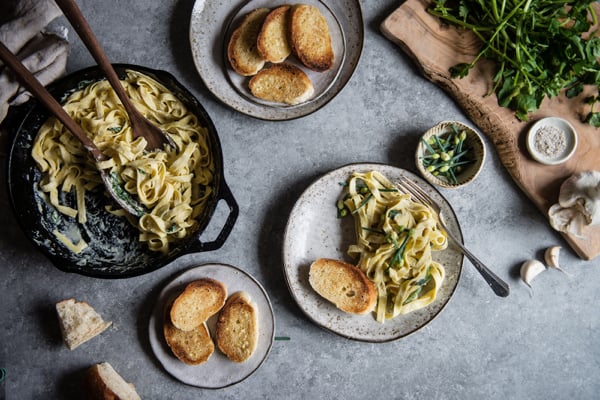 This chickpea alfredo with watercress and chives is a gorgeous springtime meal: hearty and creamy enough to feel like a treat, but still infused with fresh herbs and pungent watercress. It’s from Lindsey‘s inspiring new cookbook, Chickpea Flour Does It All, which I’ll be reviewing before too long, and right now the recipe is featured (along with exquisite photos) on Two Red Bowls. 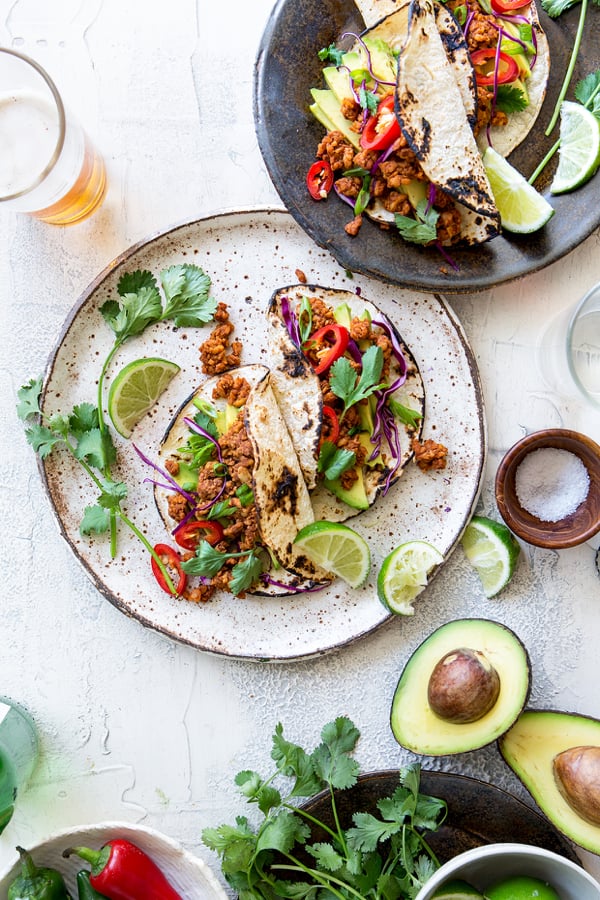 I’m just drooling over these bold, flavorful tempeh tacos from Real Food by Dad. An easy recipe, and this is exactly the sort of meal I love to eat for a weekend breakfast! 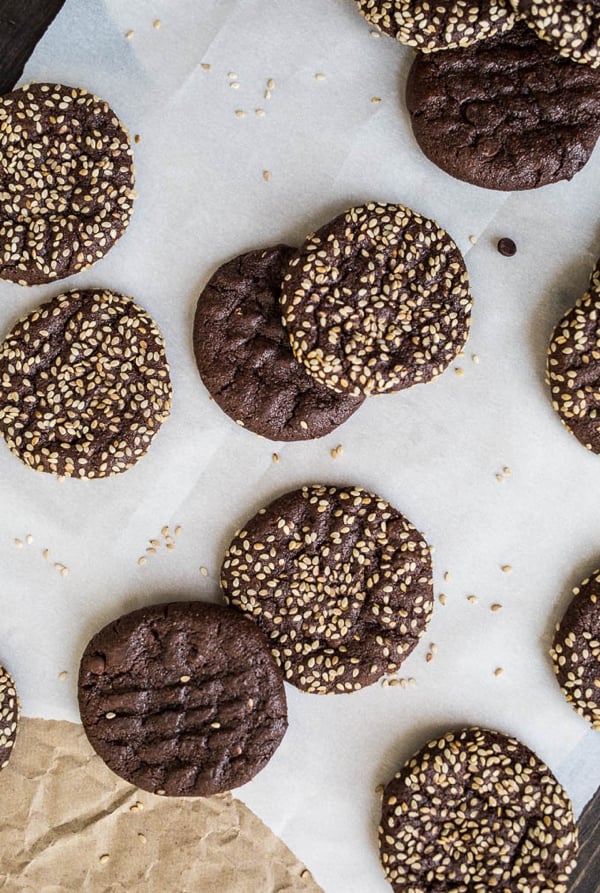 Finally: I love chocolate, and I love tahini, so I’m pretty smitten with Tess’s chewy chocolate tahini cookies. What a great evening treat or snack!

1. I’m so happy that the role of narrative and storytelling is getting more and more attention in the medical world. Self-expression can play a critical role in the healing process, and no matter, what, clear communication between patients and their physicians is an important part of effective care.

We don’t usually think about narrative in the context of emergency medicine; it’s spoken of more frequently in cases of complex or chronic illness. But Dhruv Khullar has very compelling things to say about why even a few moments of conversation–what he calls “some moment of grace and meaning we can help patients find in the time they have left”–can help to make the ER a more humane space.

2. A great expose of how a recent study about genetics and vegetarian diets was manipulated and publicized misleadingly by a number of respectable media outlets. As I understand it, the study showed that some human beings living in primarily vegetarian cultures possess an allele that allows them to produce synthetic versions of omega-3 and omega-6 fatty acids. Such fatty acids may be lower in plant-based diets than in omnivorous ones, so this gene is a neat adaptive trick, evidence that human bodies can evolve to thrive nutritionally under different geographical and cultural circumstances.

The study authors suggested, however, that too many fatty acids in the body can be maladaptive and lead to inflammation, so people in vegetarian cultures who possess the allele may be best off avoiding excess meat or fatty foods in the diet (because in their case, the body is already predisposed to generate a sufficient amount of fatty acids without getting additional food sources).

Kaleigh Rogers’ article points to the difficulties of credible science journalism. Most scientific studies are complex, and the findings are often significant only within a certain context. It’s the job of science writers to make the studies clear, but accessibility should never come at the expense of nuance. Oftentimes–as was the case with this study–the devil is in the details.

Rogers also interviews Nathaniel Comfort, a professor of astrobiology at the Library of Congress and NASA who blogs about hype and misconceptions in genetic research. He says,

“‘Vegetarians make us feel guilty, right? They’re so virtuous and ascetic, and yet bacon is so good, you know?…Interpreting this study like this is a way for someone to rationalize their not following a vegetarian diet.'”

I think this rationalization drives a lot of misconceptions and misleading information about veganism and vegetarianism in the media and popular science reporting, and it’s refreshing to see it called out.

3. A moving, beautiful essay about mating among pigeons and what it might suggest about the capacity of winged birds to experience the feeling we call love. Romantic love as we understand it is often thought to be a uniquely human emotion, and some dimensions of it may be, but as the author notes, many species demonstrate behaviors that are indicative of deep attachment and commitment to each other:

“Perhaps human love is unusually complex, invoking not just physiology but our unique cognitive sophistication. Still, many species display a cognitive complexity—awareness of self and others, long-term memory, a capacity for abstract concepts—comparable to primates. The gentle social courtship of “allopreening,” in which birds groom one another’s feathers, is especially sophisticated. Just as I can think fondly of my lover while she’s away, so might a pigeon think fondly of its absent mate.”

The article is wrapped around the author’s experience observing two pigeons in his Brooklyn neighborhood. One of the details I love most is that the research he conducted in response to the pigeon couple did not only change the way he thought about love in the animal kingdom; it also prompted him to think differently about pigeons as a species:

“Ubiquitous and unappreciated, typically ignored or regarded as dirty, annoying pests, pigeons mean something else to me now. Perched on building ledges, chasing scraps of food, taking to the skies at sunset: Each one is a reminder that love is all around us.”

I love reading about any breakthrough in how we regard and understand our animal neighbors, and this is such a beautiful articulation of admiration between species.

It’s a nascent area of research (thanks to a combination of understandable skepticism and some amount of bias in the medical profession), but it offers the hope of decreasing medication costs and side effects.

5. Finally, a really smart Vox article on what is often overlooked or glossed over in flashy headlines about the promise of fasting diets.

When it comes to fasting, I’m admittedly a bit biased. My own experiences with fasting were all extensions of my eating disorder (whether I was in touch with my real motivations at the time or not), and because of my history I take a firm stance on the importance of regular, filling, sufficient meals.

I extend that stance to work with clients because I’ve yet to see any regular amount of meal-skipping or fasting that didn’t lead to binges, uncontrollable cravings, or overeating. In other words, I’d be a lot more openminded about the practice if I’d seen a track record of good results! Instead, I’ve seen it drive cycles of restriction and excess–a sentiment that is echoed by an ED specialist interviewed for the article:

There is a body of scientific literature that links fasting to a slowing of the aging process, and there’s at least one plausible mechanism (increased activation of sirtuins) behind the findings. But what I love about the Vox article is that it makes clear that what works in a laboratory, or in the scientific abstract, doesn’t always work for human beings living in the real world, who are subject to complex psychology surrounding food.

The article actually made me realize that one symptom of my orthorexia was a tendency to treat my body as if it were a scientific experiment, subjecting it to food regimes that were impractical and devoid of pleasure for the sake of longevity or health. The desire to be healthful was good, but it became so obsessive that it started to override my sense of reason–and my capacity to recognize that eating is an act of pleasure and socialization and self-care in addition to being a part of healthy living.

I’m not saying that everyone who flirts with intermittent fasting is subject to the same motives or potentially destructive tendencies that I was. I carry around a lot of food baggage, and for me, a certain kind of caution is necessary–caution that may not be necessary for folks who are simply curious about a potentially beneficial way of eating.

But I do think there’s a certain danger in behaving as if nutrition can be divorced from real life experience, and in stripping the pleasure and cultural connotations of regular mealtime away from food. The author of this article, Julia Belluz, makes the point that the science of intermittent fasting is much less conclusive than some articles would have us believe. But her main point–the point I think is really compelling–is that the act of eating is not only about nutrient acquisition and metabolic regulation. It’s complex, and for better or for worse, it is deeply woven into the fabric of our whole lives.

On that note, friends, I’m off. I wish you a wonderful Sunday.

Well, hello. This isn’t my normal time to be posting the weekend reading roundup, but time has been slipping through my fingers in the last week. I’m doing my best: sticking to the parts of my self-care routine that really count (yoga, meditation, cooking when I can, staying connected to friends on text and social media, if not in person), prioritizing what needs to get done, and postponing or letting go of the rest. It’s not a very elegant dance at the moment,…