I brought a lot of food writing with me to Prague, including Julia Child’s My Life in France, Molly Wizenburg’s A Homemade Life, and Laurie Colwin’s Home Cooking, which I’ve read plenty of times, but could probably revisit indefinitely. I also read Jenni Ferrari-Adler’s essay collection Alone in the Kitchen with an Eggplant, which is a compilation of reflections on cooking for oneself.

I’d read excerpts from the book a long time ago, and I was excited to revisit it in the context of finding myself once again making and eating most of my meals solo. I was a little surprised of how unrewarding a portrait of cooking for one the book paints. Not all of the essays, of course: Laurie Colwin wrote the titular essay, and she has fond things to say about cooking alone in a tiny NYC apartment. (Her words reminded me of my first New York kitchen, which had a two burner stove and was so tiny that my roommate and I literally couldn’t stand up it in simultaneously.) Amanda Hesser’s idea of single cuisine, meanwhile, involves a lovingly prepared truffled egg toast.

But the gist of many of the essays seemed to be that food is a pleasure for sharing with loved ones, and that there’s little pleasure to be had in cooking for oneself. Solitary dinners are presented as an opportunity to eat peanut butter and saltines (Ann Patchett’s go-to) or other odds and ends.

It’s such a hard idea for me to wrap my mind around. All things considered, I’ve cooked and eaten by myself much more than I’ve cooked and eaten with or for others. There are plenty of reasons for this: being an only child, having a single room for most of college, living alone for most of my twenties and now a new chapter of my thirties. When I lived with Chloe after college we were both busy and distracted and didn’t do much cooking at home, in spite of the fact that both of our lives essentially revolve around cooking now.

For the record, I agree that it’s a great pleasure to share food. I love cooking for others and don’t do it often enough; I’ve been making an effort to invite people over to my home more often specifically so that I can have more opportunity to eat in company. When Steven and I moved in together, I experienced firsthand—and for the first time in my life—how sweet it is to share a meal with someone at the end of each day.

This was a powerful antidote to my personal history. My solitary cooking and eating has existed at both ends of a spectrum between self-care and self-punishment. For much of high school, college, and periods of my early twenties, eating alone was not a pleasure so much as a concession to my need to feel in control of things. It was a means of avoiding socializing or breaks in my routine. I know all too well what it feels like to choose to eat alone when one could share food instead, not out of an appreciation of solo dining as its own, worthy experience, but rather as a means of staying sheltered and closed.

In spite of everything, though—in spite of having a clearheaded appreciation of how great it is to gather and share a meal—I’m pretty firm in my belief that it’s a wonderful thing to cook for oneself, if one is inclined in that direction. (Some people just don’t enjoy cooking, and would rather treat themselves to other solitary pleasures, which is just a matter of preference.)

Yes, cooking is work, and sometimes the work feels more justifiable if another person can appreciate the end product along with you. But when I cook for myself, it’s a way of asserting that I’m worthy of something that demanded a little effort and tastes good as a result. On the nights when I do make something simple—dinner toast, or a quick pasta dish—I’m always glad to be reminded that good and nourishing food doesn’t have to be complicated.

It’s bigger and more meaningful than that. The other day, talking with a close friend about depression, I mentioned that cooking has always an act of resistance on my part. During my final anorexia recovery, cooking became a form of defiance, a fierce assertion of the fact that I deserved to live, to experience pleasure, to discontinue a life in which I was constantly denying myself what I wanted and needed.

Today, years later, cooking is very often my means of pushing back against feelings of hopelessness or despair. A good meal can’t always be redemptive in the face of depression, but I’m surprised by how often it feels that way to me. It’s something I can do that is productive and rewarding, practical and pleasurable at the same time, a reminder of what I value and care about. It isn’t everything, but it’s definitely something.

People cook for all sorts of reasons: out of habit, for pleasure, or because other people are counting on them to do it. For many people, cooking is just a matter of upbringing or instinct. When I mentioned this topic to a good friend, she said that she’s always cooked for herself, all throughout her early professional years and graduate school. She said it would never have occurred to her not to. For many people, cooking is also a matter of eating economically, and for others, it’s part of staying healthy.

Of course, there are those nights when cooking feels like a dreaded chore. We all have them. I have a lot of them. Sometimes the solution is to stop dragging my feet, get myself to the kitchen, and make something simple. It’s not always the most memorable meal of my life, but I’m nearly always glad I cooked. Sometimes the answer is to give myself a night off from cooking, and there’s definitely a time and a place for that, too. No matter what, though—even if you told me that I’d forever be the only person who ate my food—I can’t imagine what my life would be like without cooking in it.

On that note, I’ve got batch cooking to do today. For most of August I had plenty of flexibility about when I could get cooking done, but I’m moving into a more structured schedule again, and weekend time is precious! While I do that, I hope that you enjoy these beautiful recipes and a handful of reads. 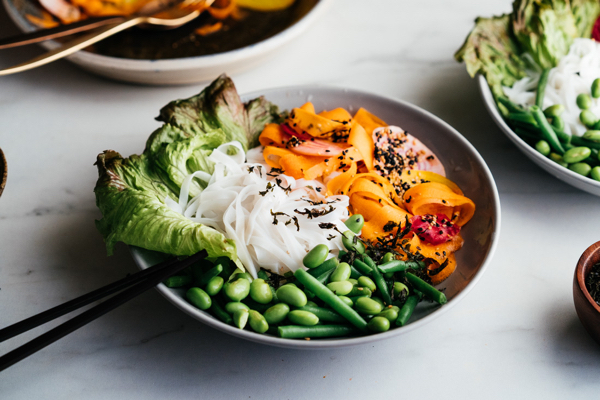 Weather in NYC has taken a sharp turn toward the chilly/autumnal, but for some reason my recipe crushes this week are all pretty summery, starting with this awesomely simple raw carrot and beet salad with sesame dressing and noodles from Malin over at Good Eatings. 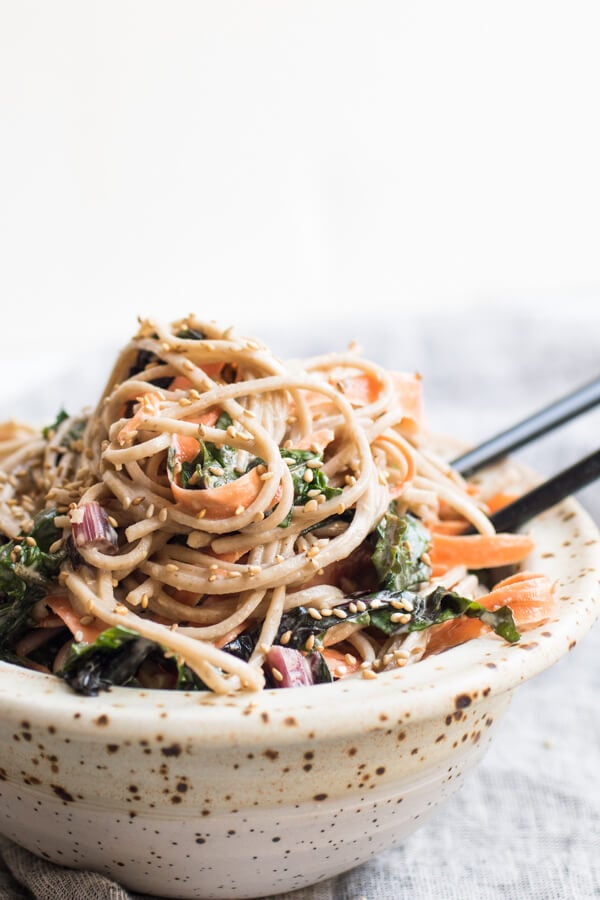 More noodles! Soba + tahini salads are one of my favorite combos (this one gets a lot of love during the school year), and I love Abra’s version, which also features Swiss chard. 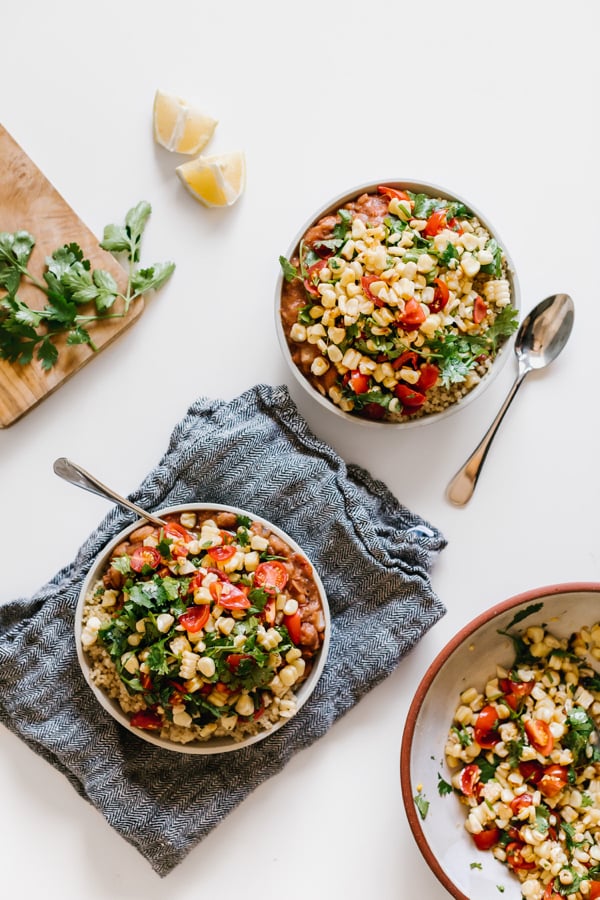 Not one, but two beautifully simple and nourishing vegan recipes: a pinto bean chili and a cherry tomato & corn salad from the lovely Jessie at Faring Well.

There’s so much to love in this bowl: lentils, toasted pepitas, cauliflower rice, crispy veggies. But I think Jen had me at “spicy cashew sauce” 😉 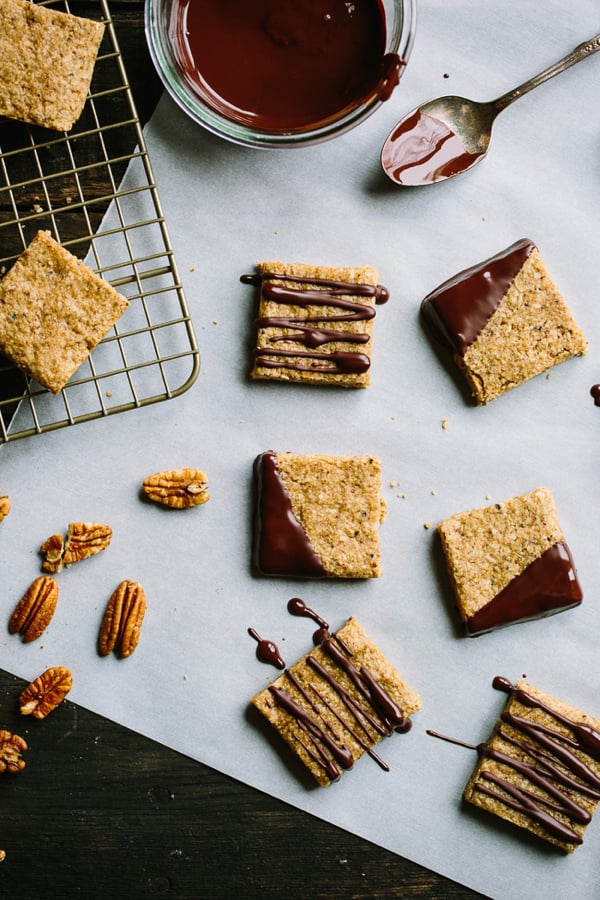 When I first saw the recipe for Emily’s lovely coffee pecan oat squares, I didn’t realize they were vegan. I was delighted to discover that they are, and they look so good.

1. A charming article on how celery was considered to be a delicacy during the Victorian era. All evidence of how food tastes and trends shift and evolve over time.

2. During my post-bacc, I got a small taste of how rewarding and valuable it can be to learn and ask help from much younger peers. I was really touched by this story of Paul Critchlow, a retired banker who spent a summer interning at Pfizer and considered himself richer for it.

3. A lot has been written lately on how anxiety is a double-edged sword: helpful and productive sometimes, debilitating and cruel at others. This article breaks down different types of stress and their potential impact on students, using the expertise of popular health psychologist Kelly McGonigal as a guide.

4. Maria tipped me off to this article on different types of “brain architecture,” the study of how structure and function work together neurologically. I thought it was pretty fascinating!

5. Also fascinating: an exploration of the vast and largely unknown world that lies beneath New York City, and how new advances in subterranean cartography might help to bring it to light.

I wish everyone a relaxing end to this Sunday. Coming up this week, a brunch/breakfast-for-dinner recipe. Been a while since I shared one of those, and this is a sweet one.

It’s been another weekend of Kleenex, Netflix, and soup—i.e., another lousy cold. I say “another” because colds have been pretty constant this year so far, though this one was definitely the worst I’ve had (bad enough that I got a rapid strep test; the doctor at urgent care also saw me with the sprained wrist a few weeks ago, and we had a laugh about how this isn’t my body’s month). When I wrote about being run down in April, I mentioned the…

Hello, everyone. I hope you had a lovely weekend. This is probably the last weekend I’ll spend in D.C. that doesn’t involve packing, or living among boxes, which is bringing up all sorts of nostalgia (mixed with excitement to be back in New York). More on that soon. For now, weekend reading. 1. First up, a gorgeous amaranth and cherry panzanella salad from Dolly and Oatmeal. So, so pretty. 2. Elenore’s matcha frappe. Want. Now. 3. Boy, is this my kinda salad. Tempeh bacon,…