All About Tempeh (and a Killer Salad) 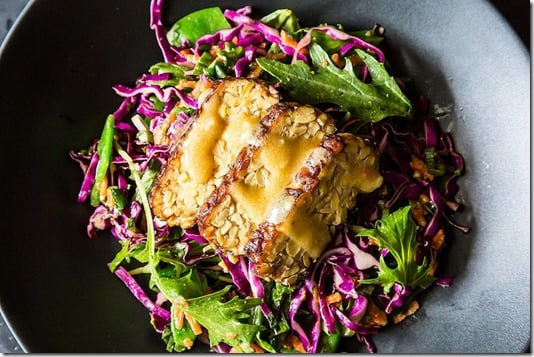 All images © James Ransom for Food52

No food is more closely associated with veganism, at least in the popular imagination, than tofu (with the possible exception of sprouts). Versatile and nutrient-dense though tofu is, I’ve always thought that it is unduly favored over its fellow soybean-based cousin, tempeh. Today, I’m here to argue that you should get to know tempeh if you haven’t already, and I’m sharing a recipe that I hope will help you to fall in love with this nutritious and unusual ingredient.

While I was researching tempeh a little for today’s Food52 column, I was surprised to learn that tempeh is Indonesian in origin, and not Chinese (like tofu). Soybeans may have been farmed in China as early as the 11th century B.C., but the first written records date to around 2000 B.C.. By the first century A.D., soybeans had spread to Korea, and by the 7th century, they were being cultivated in Japan. Ultimately, they spread to Indonesia, the Philippines, Vietnam, Thailand, Malaysia, Burma, Nepal and northern India. The earliest written reference to tempeh dates back to the 19th century, though it is likely that it was a traditional Indonesian food for many years before that.

Tempeh is made by fermenting whole, cooked soybeans with Rhizopus oligosporus, a mold that encourages the growth of Bacillus subtilis (a bacteria that may be used as a beneficial probiotic). The world “mold” is far from appealing, but the process of tempeh making, honed through time and practice already, is now conducted under safe and controlled conditions. The fermentation process binds tempeh together into blocks (traditionally, it was wrapped in banana leaves throughout this process), and it can subsequently be sliced and used in stir fries, on salads, or however you like. 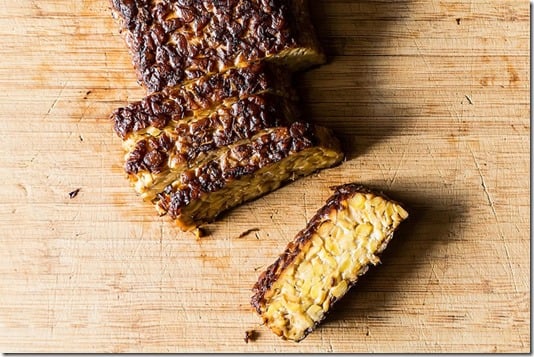 Me? I like to marinate and sear my tempeh in a bit of coconut oil. And in today’s “new veganism” column over at Food52, I give you a recipe for a perfect tempeh marinade, as well as cooking instructions. As an extra incentive to eat this wonderful food, I’m giving you a recipe for a tasty, crunchy salad with red cabbage, snow peas, and mizuna, all dressed in a sweet/salty miso mustard dressing. Phew.

A four ounce serving of tempeh contains 20 (!) grams of protein, about 20% of your daily RDA iron, and about 10% of your RDA of calcium. It also contains nearly half of the official RDA of fiber (11 grams–though getting even more fiber than that is well worth it for many people.) Such a rich offering of nourishment is good reason for you to discover tempeh, but don’t do it for the nutrition stats. Explore tempeh because it is satisfying and delicious—and because this salad recipe is killer