This turmeric spiced cauliflower kale soup is perfect nourishment for winter. It’s got a rich, creamy texture, and it’s so wholesome.

I made and photographed this soup a few weeks ago, when I was home sick with a virus and didn’t care that it was hot and summery outside: all I wanted was a meal of soup and something bready. I’ve been thinking about this thick and creamy cauliflower turmeric kale soup ever since, and I know it’s on its way to becoming a staple for me, whatever the season.

When I threw this soup together I had actually been planning on making, or tweaking, this recipe, but as I went along the meal took on a life of its own. I wanted to add turmeric for color and to offer my body an anti-inflammatory seasoning, and I realized before blending the soup up that I wanted it to be a lot thicker than the creamy, blended soup I was considering initially.

I’d say that the texture is someplace at the intersection of soup, stew, and curry: thick enough to scoop over rice, but still soupy enough to enjoy with a spoon. And you can adjust how soupy it is by adding more or less liquid along the way.

I gave my batch creamy texture with my all-purpose vegan cashew cream, which is my favorite means of adding richness to a recipe like this. If you’re in need of a shortcut, you could add full fat coconut milk instead. I tend to make cashew cream in double batches and store some in the freezer, since I use it so often—it’s easy enough to do, and I’m never sorry I did it! 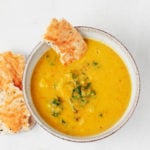 I love scooping the soup up a flatbread: naan, chapatis, or pita.

As I was enjoying the leftovers I also served it with brown basmati rice that I’d seasoned with lime juice and chopped cilantro, and I loved that, too. It was especially nice when perched next to a few bright flowers, which offered their own healing powers to the meal.

I hope that you’ll enjoy the soup in good health, but if you happen to catch a summer cold, I can attest to how comforting the dish is. Next time I might try it with chard or collards, and I’m guessing that zucchini would be a nice addition for summer, too.

A few weeks into a genuine effort to stay engaged with work while also resting, I’m having a hard time striking a balance that works. It’s a learning process, and each week teaches me something. I’ll stick with it between now and the weekend—and I’ll see you for the Sunday roundup.