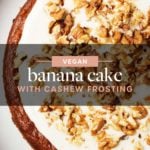 Banana bread meets snack cake in this homey vegan banana cake! It’s made with ripe bananas and topped with a creamy, dairy-free cashew frosting. The cake is wonderfully nostalgic and a guaranteed hit.

I have a thing for banana in baked goods—any baked goods. Cookies, cake, muffins, quickbread, blondies, you name it. I’ve always loved bananas, and it’s possible that I like them even more when they’re folded into a bowl of batter. This old-fashioned vegan banana cake with creamy cashew frosting is my newest favorite, a happy marriage of traditional banana bread and something lighter, fluffier, and a little more festive.

The idea for a banana cake like this was originally inspired by an old Ina Garten recipe, the old-fashioned banana cake in How Easy is That? I loved the idea, but at the time, I didn’t have much savvy in veganizing recipes that weren’t very vegan to begin with. Since I’ve been flexing my muscles as a baker much more in the last few years, I have a better sense of how to use a non-vegan recipe as inspiration for my own baked good, and I’m having a lot of fun with the process.

The cake itself is pretty simple. I tried it a few ways, and my favorite version ended up using vegan yogurt to help create moisture and to serve as an egg replacer. Any plain vegan yogurt is fine—I used almond milk yogurt, but soy, cashew, or coconut will all work nicely.

The recipe calls for a level cup of mashed banana, which is ever-so-slightly less than I use for banana bread. The texture ends up being less dense, though this is still a more dense cake than some of the bundt cakes or birthday cakes I’ve made. I think of it more as “snack cake” than dessert, though it’s fine for dessert, too 😉

The cashew frosting will definitely add some sweetness to the recipe, but it’s sweetened with maple or agave, and I find that it’s not cloying the way a buttercream frostings can be. If you’d like your snack cake to be more like snack and less like a formal dessert, you can skip the frosting altogether.

I thought that adding some nuts would be a nice way to give a bit of crunch and texture to an otherwise very moist and soft dessert. Chopped walnuts, pecans, pistachios, or almonds would all be fine here! My local health food store has these maple walnuts that I love—they’re sweet but not too sweet, perfect for putting into oatmeal or snacking—and I used them. If you have a homemade recipe for vegan candied nuts that you’re into, that would work really well, too. You could also finish the cake with a sprinkling of toasted coconut. 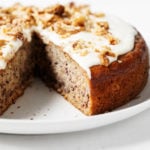 For the creamy cashew frosting:

*You can also use your favorite gluten-free, all purpose flour combination.

I always think of fall as baking season, a time when it’s finally cool enough to turn the oven on and greet the change in seasons with the smell of spices and sweets. This cake isn’t spiced like a lot of autumnal treats are—you’ll taste banana and vanilla most of all—which makes it a nice, all-purpose cake for any season. I hope you’ll like it as much as I have. And I’ll see you this weekend for the weekly roundup.