Hi all! I hope you’ve had a good weekend. I’m writing from NYC, where I celebrated the book with some of my friends and family this week. Now the boy and I are taking a little staycation time in the Big Apple before heading back to D.C. to pack up and say goodbye. It’s a busy time, and an exciting time. Here are my weekend reading finds. 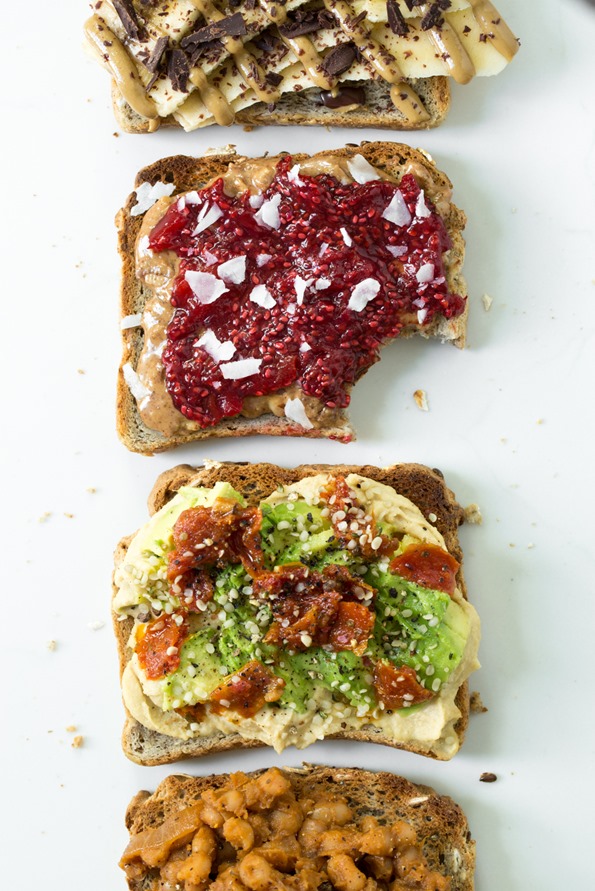 Angela has created an ode to one of my favorite foods, toast. I could probably eat some form of toast (avocado toast, banana + almond butter toast, hummus toast) every morning, and her post gives me plenty of creative inspiration. Gorgeous. 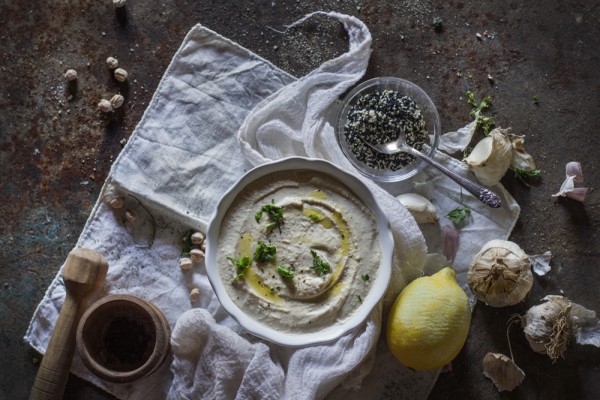 Things that would be great on toast: this beautiful cannellini bean hummus from Hortus. 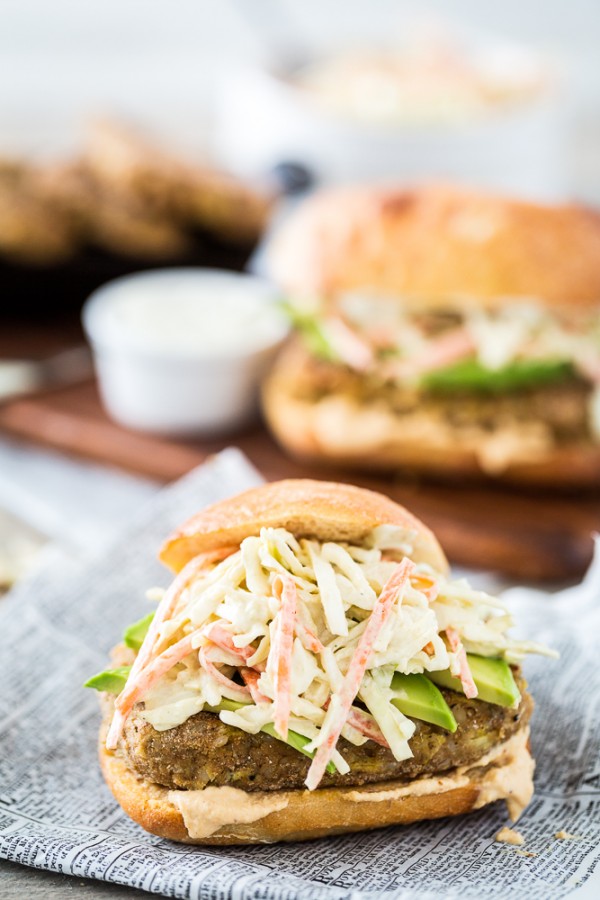 I can always count on Kristy for mouth-watering recipes, but she has officially outdone herself with this hearty “filet-o-chickpea” sandwich with tartar sauce slaw. What a lunch! 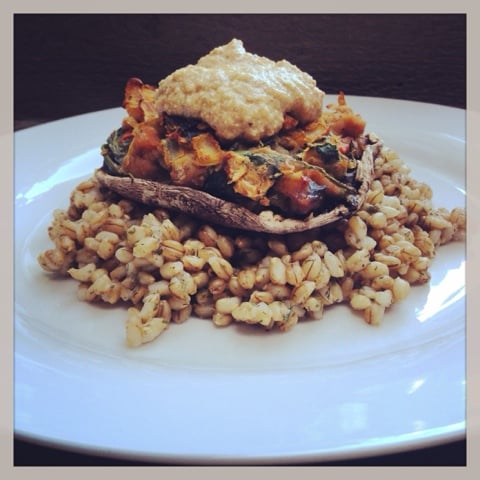 I often talk about how, when it comes to recipe development, I think more in templates than I do particular recipes. I think that’s why I’m so enamored with Wendy’s delicious and simple “greens and beans stuffed portobello mushrooms over herbed barley with a creamy vegetable sauce.” Rather than supplying a recipe, Wendy simply walks you through the steps it took to put the components together. It’s a hearty, complete, and ultra-nutritious meal, and she makes it look really easy. 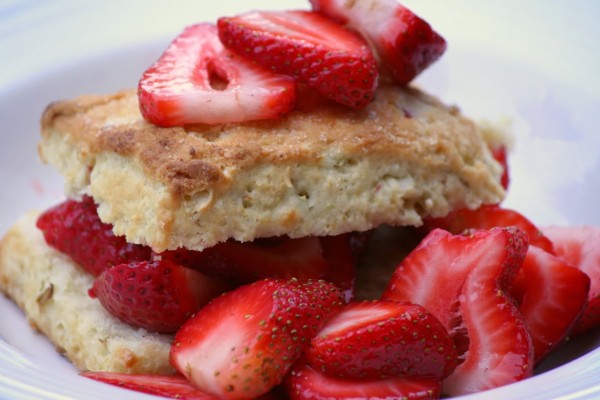 Vegan Dad‘s blog was one of the very first vegan blogs I ever read; we’re talking 2007 here! I loved Nathan’s wholesome and hearty vegan interpretations of classic recipes, and I still do. He took some time away from regular blogging, but now he’s back, and I couldn’t be happier. This gorgeous strawberry rhubarb shortcake is at the top of my dessert list (and his book is on my wish list, too).

1. One of my readers directed me to this article in the Times about zoo animals, the behavioral afflictions that befall them, and one particular animal behaviorist who tries to help. She was right to think I’d like the article, even though the images and some of the stories broke my heart open. I was particularly struck by these grafs:

“The notion that animals think and feel may be rampant among pet owners, but it makes all kinds of scientific types uncomfortable. “If you ask my colleagues whether animals have emotions and thoughts,” says Philip Low, a prominent computational neuroscientist, “many will drop their voices to a whisper or simply change the subject. They don’t want to touch it.” Jaak Panksepp, a professor at Washington State University, has studied the emotional responses of rats. “Once, not very long ago,” he said, “you couldn’t even talk about these things with colleagues.”That may be changing. A profusion of recent studies has shown animals to be far closer to us than we previously believed — it turns out that common shore crabs feel and remember pain, zebra finches experience REM sleep, fruit-fly brothers cooperate, dolphins and elephants recognize themselves in mirrors, chimpanzees assist one another without expecting favors in return and dogs really do feel elation in their owners’ presence. In the summer of 2012, an unprecedented document, masterminded by Low — “The Cambridge Declaration on Consciousness in Human and Nonhuman Animals” — was signed by a group of leading animal researchers in the presence of Stephen Hawking. It asserted that mammals, birds and other creatures like octopuses possess consciousness and, in all likelihood, emotions and self-awareness. Scientists, as a rule, don’t issue declarations. But Low claims that the new research, and the ripples of unease it has engendered among rank-and-file colleagues, demanded an emphatic gesture. “Afterward, an eminent neuroanatomist came up to me and said, ‘We were all thinking this, but were afraid to say it,’ ” Low recalled.”

Of course there’s fear surrounding the idea of animal consciousness. To acknowledge the emotional lives and thoughts of animals is to confront the moral inconsistencies that suffuse our treatment of them. It opens to the door to recognizing that the animals we readily commodify or consume are as capable of feeling pain, joy, or anxiety as the companion animals we are so deeply attached to. It means acknowledging that we may not have a monopoly on consciousness or intelligence. It means recognizing that the way we treat animals must necessarily result in tremendous suffering, and loss.

2. My friend Robyn responds with sadness and frustration to pro-weight loss imagery on Instagram. The anecdote she uses as a means of introducing the topic is a sad one; it involves her witnessing an Instagram acquaintance’s tremendous weight loss (and probably ED). These stories deserve nothing but empathy and sadness. But I can relate strongly to Robyn’s fury at the way in which certain social media outlets (Instagram particularly, because it is so visually driven) can fuel and compound the pursuit of unattainable or dangerous physical ideals.

3. A cool new study, published in the British Journal of Nutrition, which serves as a meta-analysis of organic vs. conventional food. I’ll quote from the abstract:

“In the present study, we carried out meta-analyses based on 343 peer-reviewed publications that indicate statistically significant and meaningful differences in composition between organic and non-organic crops/crop-based foods. Most importantly, the concentrations of a range of antioxidants such as polyphenolics were found to be substantially higher in organic crops/crop-based foods, with those of phenolic acids, flavanones, stilbenes, flavones, flavonols and anthocyanins being an estimated 19 (95 % CI 5, 33) %, 69 (95 % CI 13, 125) %, 28 (95 % CI 12, 44) %, 26 (95 % CI 3, 48) %, 50 (95 % CI 28, 72) % and 51 (95 % CI 17, 86) % higher, respectively. Many of these compounds have previously been linked to a reduced risk of chronic diseases, including CVD and neurodegenerative diseases and certain cancers, in dietary intervention and epidemiological studies. Additionally, the frequency of occurrence of pesticide residues was found to be four times higher in conventional crops, which also contained significantly higher concentrations of the toxic metal Cd [cadmium].”

I’m often asked if I always eat organic, and the answer is no; I do my best to eat organic as often as I can. It can fluctuate with convenience or cost. But this is certainly good motivation continue making an effort in that direction.

4. My friend Erin, who writes the super blog Naturally Ella, is a whiz with home-milled, whole grain flours. (She’s even written a book about them!) I thought you might enjoy The Kitchn’s interview with her; she has so many inspiring and cool things to say about why we all should be a little less afraid of milling (and working with) wholesome flours at home.

5. As usual, Ginny Messina cuts through the noise and gets down to the facts. This time, she’s addressing a recent Salon article entitled “Is Veganism Child Abuse?” The article describes one Sarah Anne Markham, whose baby was admitted to a local hospital with severe dehydration. The authorities were alerted because the baby’s pediatrician had voiced concern during an office visit, and Markham, a vegan, had refused the hydrating medicine offered. Instead, she said she wanted to pursue a “religion-based treatment” and contact a natural doctor. The article then goes on to detail child abuse cases in which parents who identified as vegans were starving their babies, literally.

Vegan diets are not dangerous, either for adults or for children. The American Academy of Nutrition and Dietetics and the American Academy of Pediatrics state that vegan diets are safe and appropriate for babies, and hosts of vegan parents can validate the science with their stories of raising happy, healthy kids. The issue in these horror stories is not that parents had selected to raise their children as vegans; the issue is that these parents were denying their children adequate nutrition.

It’s a tragic fact that there will always be some parents who fail to take care of their childrens’ health. Some of them will be omnivores, and a small number will be vegan. Because vegans are still a minority, and because many folks find veganism threatening or distasteful, the small number of vegan parents who happen to be unstable or irresponsible or abusive are bound to generate media attention. They’re bound to be held up as evidence that veganism is inadequate. It’s crucial, though, for the public to recognize that the parents are to blame, and not veganism itself. As a society, we don’t point to each and every child who is starved or made ill and conclude that omnivorism is to blame; we blame child abuse, and child abuse is also to blame in the Markham case. And while we’re on the topic, it’s important to respond to Salon’s suggestion that parents can successfully raise vegan kids with “considerable thought, education, and self-care to assure they are getting adequate nutrition.” All parents–omni and vegan alike–must feed their children with thought, education, and self-care. Vegan parents aren’t alone in this; they just happen to be educating themselves about a different dietary paradigm.

Before I go, I wanted to link up to an incredibly kind review of my book that Valerie (author of the blog City Life Eats) wrote this past weekend. Valerie was one of my recipe testers, so she has plenty of inside knowledge about the book and the food it contains. Still, I was really moved by her generous words: “Choosing Raw, both the book and the blog, is quintessentially Gena – thoughtful, compassionate, inspiring and humble and, at the same time, informative, warm, and sensible.  Like the blog, the book is also beautifully written . . . Gena writes about being a raw foods enthusiast and provides guidance on how to add more raw vegan foods to your diet in a completely judgment-free, relatable way. The book is chock-full of information on leading a vegan lifestyle, how raw foods can be beneficial (regardless of whether you want to adopt a raw-leaning lifestyle), and then introduces you to the food using an approach of building blocks.”

Valerie also shares my recipe for avocado and black bean “scramble.” Check the post out! 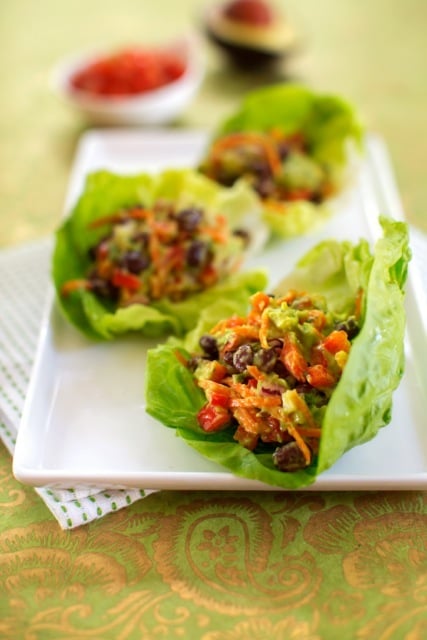 Have a good evening, friends.

A friend of mine told me that he recently went to a conference where all of the attendees seemed to be talking about perfectionism, in spite of that fact that it wasn’t the conference theme. They were discussing it as people who had been susceptible to impossible standards in the past, but now counted themselves lucky to have let perfectionism go. As we were talking, it occurred to me that I haven’t thought about perfectionism in a long time, though it had a…

Once upon a time–and by that I mean as recently as 8 months ago–I spent a lot of time reading articles and lists and impassioned bits of advice about productivity. I listened to podcasts about time management, efficiency, and entrepreneurship. In spite of the fact that I wasn’t crushing my goals or organizing my time in some spectacularly economical fashion, I remained fiercely attached to the idea of operating that way. In many ways the fixation on productivity was an expression of longing for my…