This vegan feta pasta is a dairy-free version of the famous, viral baked feta pasta recipe. It uses a homemade feta vegan made with tofu in place of regular feta. It’s high in protein, nutritious, and so easy to make!

One of the last recipes that I prepared in my last apartment was this vegan feta pasta.

I watched baked feta pasta go viral on social media in 2020 and 2021. I loved the looks of the dish. It was creamy, fresh and incredibly easy to prepare. It had the convenience of a sheet pan meal and the heartiness of a summery pasta supper.

I didn’t make the recipe, no matter how appealing it seemed, because it looked like the sort of thing that might be tough to veganize.

There are now vegan feta options in supermarkets: I really love Violife’s feta, for example. But I wasn’t sure whether they’d melt and turn creamy in the same way that regular feta does in the original recipe.

Earlier this summer, I did try the recipe with commercial vegan feta. It was OK, but it wasn’t what I’d hoped for. The vegan cheese melted into straight-up oil, so the sauce ended up having a greasy quality, rather than a creamy one.

I had the thought to try the recipe with my homemade vegan feta cheese, but I also had doubts. I love that recipe, and I think that it captures a lot of the flavor qualities of feta for sure. But the texture is a bit different from regular cheese, and it doesn’t melt.

Finally, I thought what the heck, and I decided to give it a go.

I’m really happy to tell you that I thought the vegan feta pasta was a total success.

Is it exactly like the original viral recipe? I have no idea, honestly. I never tried the original, so I don’t know for sure what it tastes like.

What I do know is that this pasta is salty, savory, and sweet. It’s full of juicy summer tomatoes and herbs.

Thanks to the use of tofu feta, it’s also nutritious in different ways than the original recipe: it’s lower in fat, and it’s higher in plant protein. Since tofu is also a source or iron and calcium, the pasta dish contains both of those nutrients.

In short, I think that using the vegan feta recipe makes this dish a little different from the recipe that inspired it, but also very worthy of a place on your summer table.

If you don’t happen to have read about the baked feta pasta when it first became popular, then you might be wondering what my vegan version is aiming for in the first place.

In short, the viral baked feta pasta is a recipe in which tomatoes, olive oil, herbs, and feta are baked in an oven-safe dish until the tomatoes have burst and become juicy.

When you stir the burst tomatoes with the baked feta, the whole warm dish is transformed into a creamy, cheesy sauce. You add cooked pasta to the baking dish, stir everything well, and voila: a flavorful, hands-off summer meal.

My vegan feta pasta uses a similar method. To prepare it, you’ll bake grape or cherry tomatoes with some olive oil and a whole batch of my vegan feta cheese.

Once the tomatoes have transformed into juicy, saucy perfection in the oven, you’ll add cooked pasta to the dish. You can finish the vegan feta pasta with torn basil, if you like. Otherwise, this is a spare summer recipe that doesn’t require much fuss if your tomatoes are ripe and sweet.

Note that my vegan feta requires some marinating time (2-4 hours, overnight is fine), so you’ll want to plan your process accordingly.

Where did the viral feta pasta originate?

When the baked feta pasta first become popular, I wasn’t sure who had made it first.

I learned more when I read this article, from the Washington Post. Apparently two Finnish food bloggers, Tiiu Piret and Jenny Hayrinen, wrote about a feta pasta dish 2018 and 2019, respectively.

Hayrinen is credited with a more simplified recipe that inspired this TikTok video by MacKenzie Smith of Grilled Cheese Social. From that point onward, many other food bloggers created and shared their own versions of the recipe.

I use four cloves of halved garlic to make the pasta. The halves will bake right along with the other ingredients. If you love, love, love garlic, then you can add as many additional cloves as you like.

Tomatoes provide the juiciness in the sauce, but olive oil helps to give it richness. I use two tablespoons total. I’d imagine it’s possible to make the recipe without the oil, and I’ll be curious to hear how it is if any readers try it!

I really like what it contributes to the tomato/vegan feta sauce: an unctuousness that wouldn’t be there otherwise.

I added a few sprigs of thyme to my tomatoes and vegan feta as they baked, which I removed once the tomatoes were done. I also added some fresh, torn pasta to the finished pasta.

Both of these herbs are optional and fair game for modification. You can use neither, one, or both. You can also trade one of the for another summery herb that you like. For example, I’d love to try a version of the pasta with dill.

I use the plain version of my very beloved vegan tofu feta cheese in the recipe.

For many of my recipes, I welcome and suggest store-bought alternatives as a means of saving time. Since I tried this recipe with store-bought feta, though, and didn’t love the results, I’d suggest you stick with the tofu feta for this dish. It’s part of what makes the pasta both tasty and nutrient-dense.

You can use any type of pasta that you love in the dish: regular wheat, whole wheat, legume-based, gluten-free, you name it.

I recommend a medium pasta shape, such as fusilli, rigatoni, penne, gemelli, or cavatappi in the recipe. However, I’ve tried it with spaghetti, and it was still great.

I’ll admit it: as passionate as I am about vegan meal prep, I think that this particular pasta tastes best when it’s fresh and hot. It’s worth making and enjoying it—and perhaps sharing it—right away.

With that said, as a solo dweller I did actually have the vegan feta pasta leftovers for a few nights. And the stored portions stood the test of time. When I made it again (which I happily did) and froze a few portions, the defrosted leftovers held up, too.

TL;DR, the pasta is at its juiciest when it’s freshly baked and mixed. Leftovers will be just fine for up to four days in airtight containers in the fridge, or up to six weeks in the freezer.

Pasta is a go-to meal for me at any time of the year. During these hot months I enjoy very simple versions that allow fresh produce to shine through. Here are a few of my other favorite dishes. 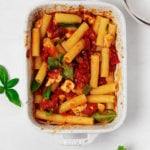 How lovely it was to enjoy bowls of this fresh, nutritious, summery pasta in the days leading up to the chaos of a move. I can’t wait to try it out again and enjoy it from the new digs.

Speaking of that, it’s still pretty chaotic around here—but I’m settling in well. Till soon,