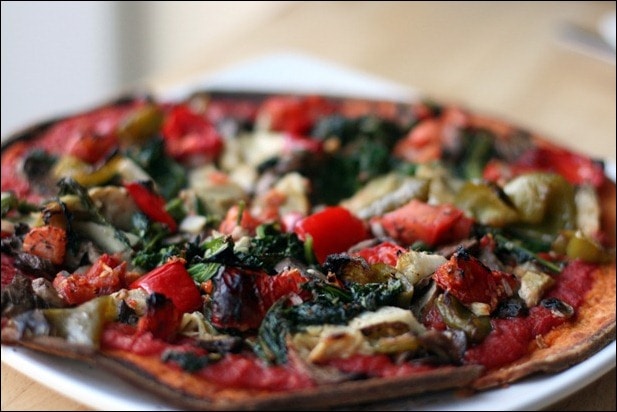 This was a jam packed week for me; while summer physics can’t compare to the Orgo II/Biochem experience, there’s a lot of work, and assignments are due consistently each day. Between that, CR, and a narrative medicine seminar I sat in on this week, I’m ready for a weekend…except that this weekend includes two Boltbus rides for a very short sojourn in NYC for The Seed! I’m really excited for the conference, but I’ll feel better once I get to NYC tonight; right now, I’m trying to wrap up a couple of school deadlines from the bus before I get ready for the event.

Last night, I took a restorative break to meet up with Anne for dinner. It’s so nice having her back in DC! We’ve been hoping for some time to concoct a recipe together, cook at her new place, and post jointly. But right now, Anne’s in the early stages of her clinical internship at Washington Hospital Center, and I’m in the early stages of intensive physics, and last night we were both in the mood to have somebody else cook for us. Pete’s Apizza to the rescue.

Pete’s Apizza is a DC institution, widely regarded as some of the city’s best pie. It’s described as “New Haven style” pizza; I have no clue what that means, but I think it means thin, crispy crust, and—in the case of this particular franchise—thoughtful, fancier toppings (like sauteed wild mushrooms and slow roasted tomatoes). I’d heard that the pizza was incredibly vegan friendly (Daiya is always on offer, and the toppings include tons of veggies), and Valerie also tipped me off that they carry a vegan, gluten free crust that is made with a chickpea flour/rice flour blend. When I heard this, I perked up: chickpea flour is one of my absolute favorites!

Apparently, it’s a favorite of Anne’s, too. When I mentioned it to her, the following gchat ensued:

me: they have a cool vegan crust made with chickpea flour. Epic.

me: i am also in <3 with chickpea flour. #thingsfoodbloggerssay

So we were both pretty excited for our chickpea flour pizza last night, and it did not disappoint us! The pizza was thin, crispy, and a nice middle ground between conventional and unconventional. Having never loved pizza as an omni, the pizza I like now is always a little unusual and creative, and this fit the bill. Anne and I both started with salads: she got a small and I a large salad of spinach, slow roasted tomatoes with roasted garlic on top (so good that even I, the garlic-phobe, liked it), toasted pine nuts, and balsamic dressing. It was nice and crispy. 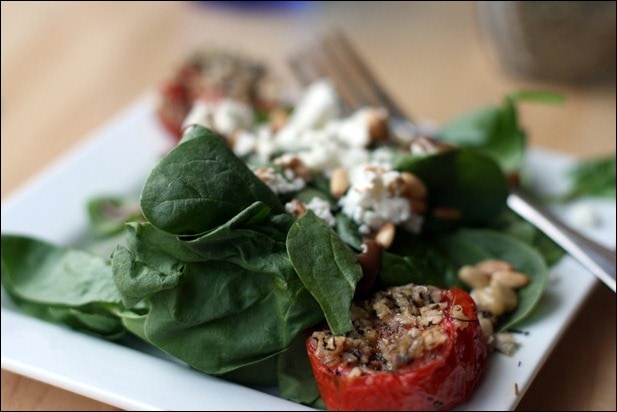 That’s Anne’s salad, which had goat cheese (I ordered mine without, of course). All photos in this post are courtesy of Anne, who recapped our dinner this morning! I forgot my camera card reader in DC, and I’m on the bus right now. Blogger fail.

Speaking of the slight nuances between our meals, one of the things I actually love about dining with Anne is that it’s super easy for us to share food. Anne isn’t vegan, but she is one of the most healthy, open-minded and veggie-oriented diners I know. Her blog is full of vegan-friendly recipes, and beyond that, all of her recipes are healthy and easy to make. We like a lot of the same restaurants and types of dishes, so I have a feeling there are more DC dining adventures lying in wait. Anyway, last night, we shared a pizza with slow roasted tomatoes, artichokes, roasted peppers, sauteed mushrooms, and sauteed spinach. 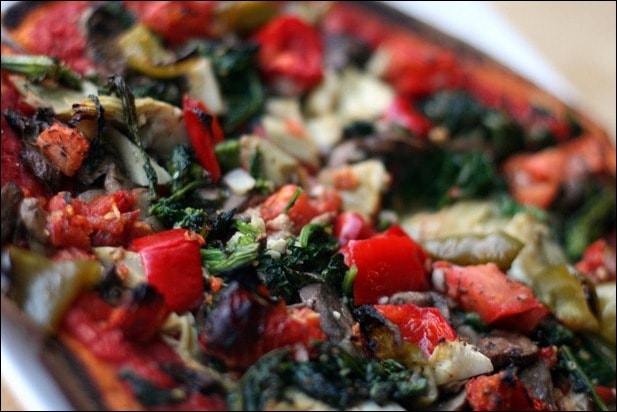 Yum. We could have gotten daiya, but since I’m not much of a cheese lover, I don’t tend to crave vegan cheeses on my food, and Anne was just as happy to do without (“it’s all about the sauce, anyway,” quoth she). We both thought the pizza was super flavorful and crispy! Here’s the crust in action: 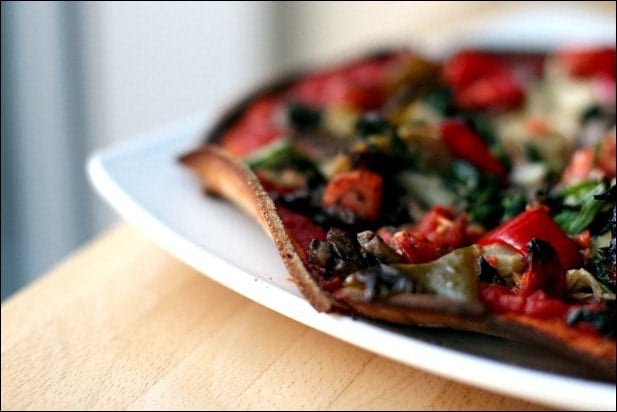 Over dinner, Anne and I had a chance to chat about her experiences as a hospital dietetic intern. Interestingly enough, Anne’s working at the same hospital where I briefly did post-trauma alcohol and drug surveys last summer. Between that and volunteering this year, I have at least some sense of the challenges and discouragement that comes from working in dietetics within a hospital environment; I also realize that, as much as physicians may try to inspire lifestyle changes and healthy eating habits in patients, there’s only so much they can do. All things considered, it’s often hard to prompt interest in nutrition among patients who are so grievously sick as many of those in hospitals. Nevertheless, Anne and I remain committed to lives in health care, and she, at least, will have ample space to help people make healthy changes in her RD career ahead!

After dinner, we strolled around Clarendon for a bit, and then I got a chance to see Anne’s new (adorable) apartment. I got back home in time to head to bed early for my early morning class at Down Dog Yoga. Thanks for a great evening, friend! 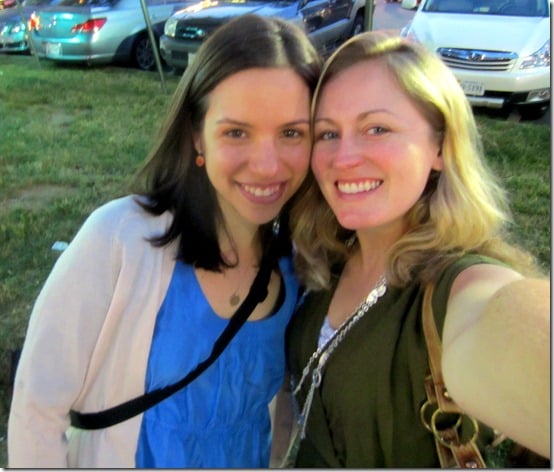 Since we all bonded over amazing morning overnight oats this week, I wanted to show you today’s raw breakfast in class: it’s the luscious lime pudding I shared on Monday, topped with dehydrated buckwheat, pumpkin seeds, and goji berries, with fresh berries mixed in. Superfood love. 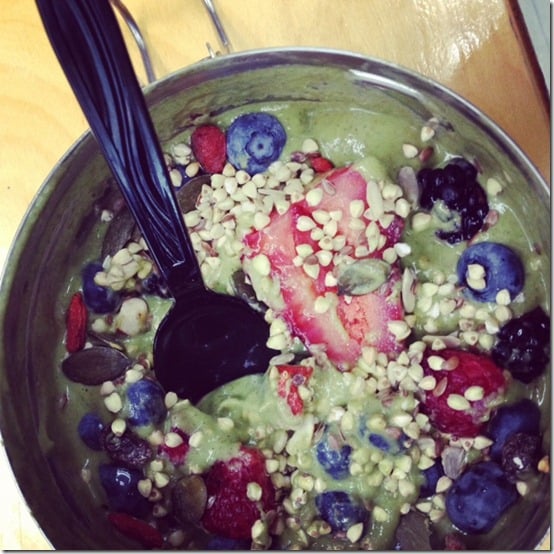 Alright friends! Time to get ready for The Seed. I can’t wait to tweet out some live updates and to recap the event for you all as soon as I’m back in DC!! Have a fantastic weekend, and if you’re a NYer who’ll be at the event tomorrow, come and find me to say hi.