Hi friends, and happy Sunday. I hope you’ve all had nice weekends. Mine has been busy, but I’m looking forward to a quiet, homey day of work. In the meantime, here are the recipes that have been catching my eye lately — and the articles I read this week. 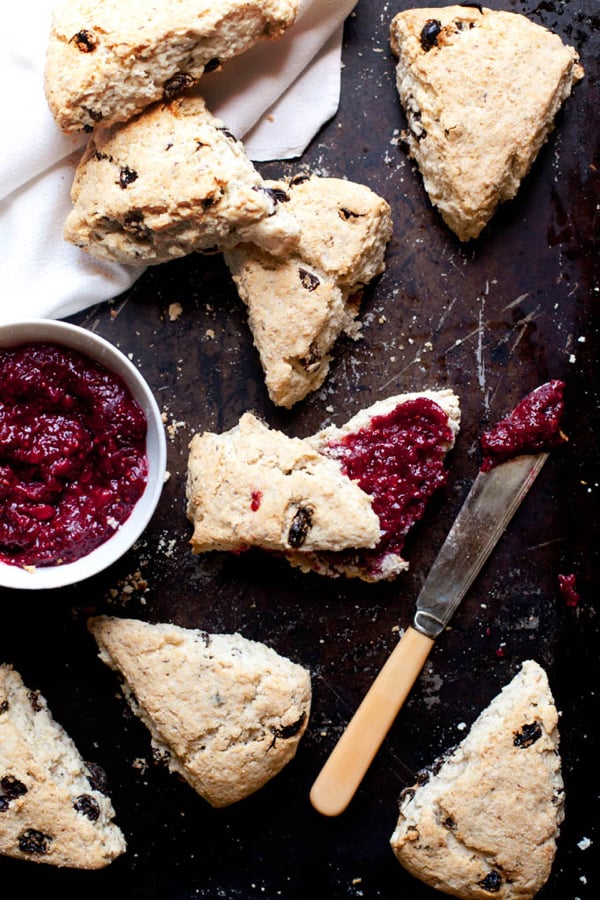 Irish soda bread recipes are all over the web this week, in preparation for St. Patrick’s Day, but I thought these Irish soda bread scones (vegan + GF) were a particularly creative and tasty spin on the classic recipe. (Recipe courtesy of Our Four Forks.) 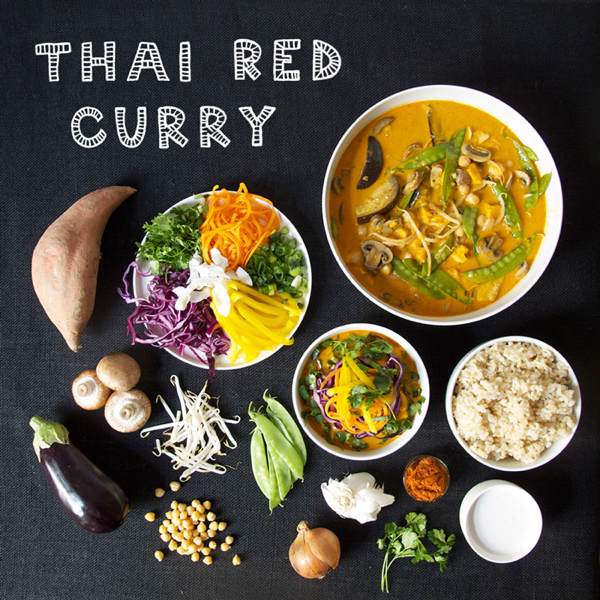 Curries never get old in my home–they are such a simple, versatile, and delicious vegan staple food, so easy to vary with different ingredients and colors. This curry recipe, courtesy of Wholy Goodness, looks particularly vibrant. 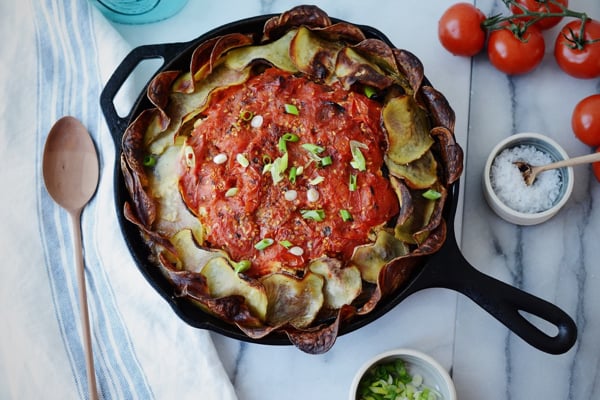 I’m totally blown away by this layered vegetable galette from Fare Isle–what a beautiful, hearty dish, and the potato crust is totally ingenious. 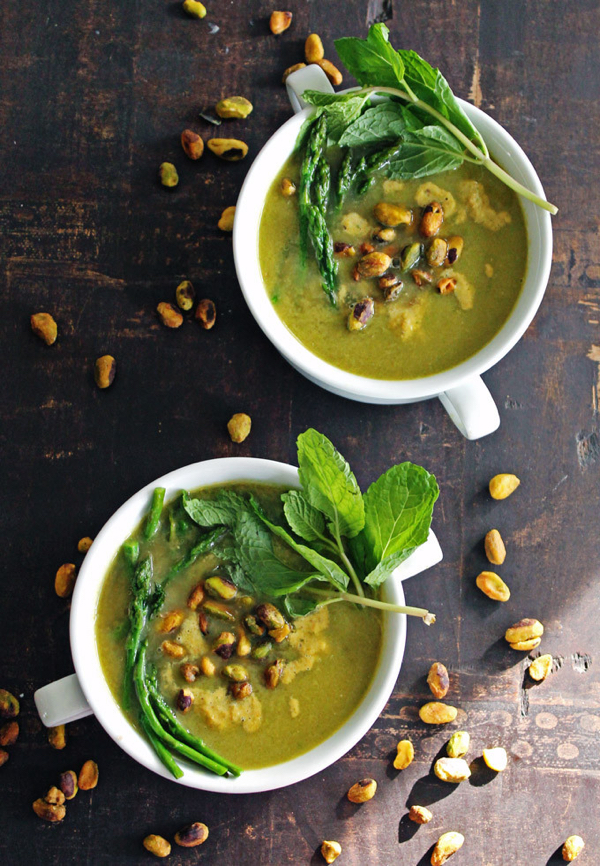 I’m a sucker for anything with asparagus, and this roasted asparagus soup from Rhubarbarians is no exception. Bonus points for the innovative pistachio cream idea (yum). 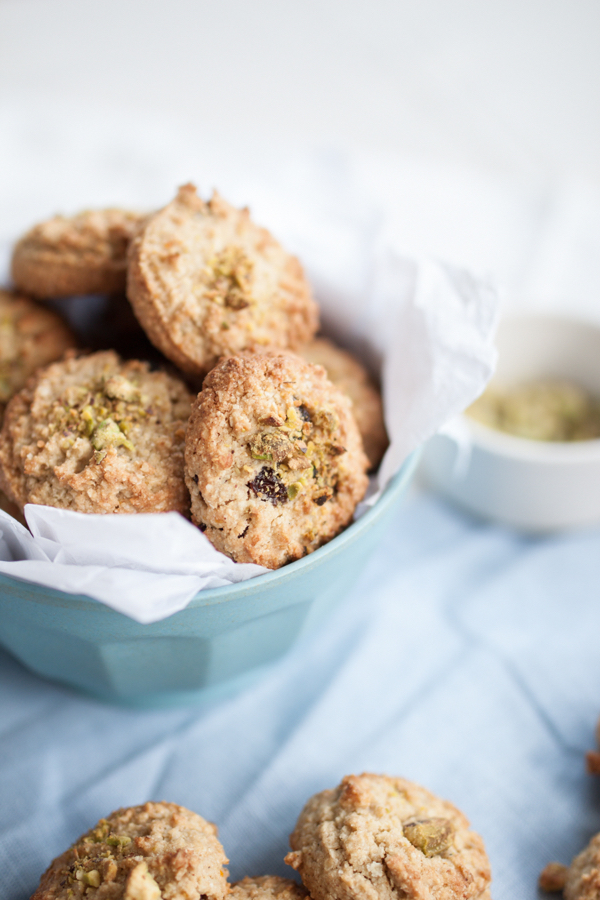 And speaking of pistachios, let’s get to dessert! I spotted these vegan, gluten free pistachio cardamom cookies on Kimberly’s delightful blog, The Little Plantation, earlier in the week. They look like a perfect afternoon treat to serve with some tea.

1. I’ve written about my feelings about meat substitutes a few times in the last year in my weekend reading posts. The upshot is this: during my more health obsessed days, I dismissed these products as being inferior to whole foods, and because they weren’t 100 % “clean” by my (distorted) standards, I looked down on them. I’ve totally come around on this. While there are some meat substitutes whose ingredients I prefer to others, I’m basically supportive of any product that helps folks to stop eating animals (or to eat less animals). It’s a question of my priorities–namely, compassion–coming into focus. It’s also the result of my having expanded my criteria for what constitutes a “healthy” food.

Finally, as someone who lives with and cooks for an omnivore who has recently transitioned to a plant-based diet, I see exactly why these products are so important. Would it be marginally more pristine, from a nutritionist’s point of view, to just focus on tofu and lentils and grains? Sure, and Steven and I do that most of the time. But convenience is important, and so is total authenticity in the food realm. Sometimes you don’t want to make your vegan nachos with lentils and walnuts and nut cheese; you want to make them with Beyond Meat and Daiya, which are just a little more accurate as simulacrums of foods we’ve given up. I can see how much these products mean to Steven; even if we don’t use them often, I think it’s important to him (and to me) that we can have them as options.

Rowan Jacobson recently echoes the point about authenticity of taste in his profile of Beyond Meat’s beast burger:

Why turn plant proteins into burgers and dogs? Why not just eat them as peas and soybeans and seeds? To which I say: taco, chimichanga, empanada, crepe, pierogi, wonton, gyoza, stuffed roti, pupusa, pastie, pig in a blanket, croque monsieur, pastrami on rye. Culture is a lump of flesh wrapped in dough. If you want to save the world, you’d better make it convenient.

I loved it–what a powerful iteration of this point. And, in a recent issue of Mother Jones, Tom Philpott describes how he himself has come around on faux meats. I don’t agree with everything he says; namely, I’ve no interest in seeing land cultivated for the captive the “grass-munching” cows he dreams about. But I think that this is a very honest piece. It’s hard, in our strident and outspoken culture of food politics, for writers to change positions on things. Kudos to him for stating a reassessment.

2. Ever wonder what dinner recipe your state googles most? For whatever reason, I found this list super entertaining.

3. A very promising and exciting new, Finnish study was published in The Lancet (online) on March 11th. The study is the first of its kind, a longitudinal study (2 years duration) of the impact of lifestyle intervention on cognitive decline. In essence, it suggests that Alzheimer’s Disease and dementia may respond positively to exercise, balanced nutrition, cognitive training, and management of certain pre-determined risk factors, including BMI, hip and waist circumference, and blood pressure. The group that had been subject to intervention had a 25% improvement in cognitive scoring over the control group. Best of all, dropout rates were low, suggesting that the interventions were feasible in a real-world context.

Of course, these lifestyle factors exist along with many other factors (genetics, epigenetics, etc.) that influence cognitive decline. And because this study tracked numerous factors, it’s hard to tell which had the greatest impact on test subjects. But the study certainly gives us reason to hope that cognitive decline, like many other diseases, can respond positively to healthful lifestyle practices.

Note: the full study isn’t available through The Lancet unless you have subscription access; for extra coverage beyond the abstract, check out Medscape.

4. Many folks have seen or heard that carrageenan, a common thickening agent in nut milks and other foods, has been linked to intestinal inflammation in lab studies (primarily animal studies). Now, a new study suggests that common emulsifiers may promote intestinal inflammation by disrupting the barrier between the immune system and the microbiome.

There’s much more exploration to be done on this topic, and animal studies are certainly not necessarily indicative of how these emulsifying and thickening agents work in human bodies. But the mechanism suggested in this study, between emulsifiers and the host microbiota, is certainly fascinating and suggestive. I also think it’s important that scientific studies have started to examine food additives for potential risks that go beyond cancer or toxicity; the study authors give the example of recent evidence that artificial sweeteners can induce dysglycemia in humans. This may be a new example, and it’s an important one to watch.

5. I was very touched by Betsy MacWhinney’s New York Times piece about her daughter’s despair, and her attempts to help connect with her through poetry. Perhaps I was moved simply because MacWhinney focused on so many of the poems that have meant a lot to me during troubled periods (Mary Oliver when I was a teen; Wendell Berry throughout my post-bacc). Perhaps it had me blinking back tears because my own single mom has often gently slipped me bits of Rilke or Berry — not in my shoe, but over email — when I was struggling. But I was also touched by MacWhinney’s attempts to reach her child with the written word, the suggestion that pain and despair have been felt before, by other human beings who managed to channel them into something redemptive and beautiful (words). This is really why I read poetry, to learn how others have made sense of the human experience. I’ll definitely be curious to read MacWhinney’s memoir.

On that note, friends, I wish you a wonderful start to the week.

I was an avid blog reader long before I became a food blogger. Like many people, I discovered what might be called “healthy living” blogs first, then more dedicated recipe/culinary blogs. I had been reading food blogs for only a short period of time when I decided to go vegan, so vegan food blogs (Vegan Yum Yum, the PPK, Bittersweet) quickly became a source of guidance and inspiration. Over time, I fell in love with certain bloggers’ voices, felt as if I knew…

In class this past week, one of my yoga teachers shared an excerpt from Nischala Joy Devi’s The Secret Power of Yoga, which is a woman-centric reading and elucidation of the yoga sutras (I picked up the book a couple days later, and I’m enjoying it so far—much less dense and relatable than the more scholarly commentaries on the text). The section he pointed to is entitled “sweets make us sweet.” Devi describes being in India and sharing food with Yoga Master Sri…