One of my favorite discoveries of 2017 so far (thanks to Twitter) is the work of Ashley C. Ford. I read and hear a lot about vulnerability these days, but it’s rare to encounter writing that’s as truly vulnerable, candid, and self-exploratory as Ashley’s. I never feel as though her essays are intended to teach me a lesson or prove a point: rather, I feel as though I’ve been granted an invitation to be a part of her thought process.

Another reason I’m drawn to Ashley’s work is that she has some incredibly refreshing things to say about body image. Her latest, a guest contribution to Joanna’s blog, is a meditation on how her relationship has liberated her—in many ways, but particularly in dissolving the shame she has long carried around when it comes to weight and size.

Ashley’s essay begins when she meets Kelly. At the time, she’s a college student, and in spite of the fact that Kelly immediately makes her feel at home, she can’t stop worrying about the fact that he weighs less than she does.

When Kelly first visits Ashley’s apartment, he asks what the number plastered on her wall is. It’s her weight; she has harbored a visible reminder since her last boyfriend lodged a complaint about her size. Kelly makes clear that he’s completely uninterested in the number; his disinterest becomes more and more evident as the number on the wall changes, yet his adoration of Ashley’s body does not.

Ashley and Kelly’s love story, which she captures with beautiful economy, is also a chronicle of the winding road toward self-love. Ashley writes,

Maya Angelou says, “Love liberates. It does not bind.” Before Kelly, “love” always looked like fixing myself the right way, so someone could bring themselves to love me. Being perfectly shaved, perfectly thin, and perfectly presentable. Now, I know real love makes room for you to love yourself the way you are, and the way you want to be. I feel more beautiful than I ever have, and I allow myself things I assumed were only allowed for women doing a better job at being pretty than I was. I allow myself to live fully.

What a beautiful testament to the healing power of being fully witnessed and embraced by another person. It reminded me of one of my friend Victoria’s quotations: “To the people who love you, you are beautiful already. This is not because they’re blind to your shortcomings but because they so clearly see your soul.”

While I haven’t felt much pressure to maintain or manipulate my body to suit a lover’s aesthetic preferences (the pressure I felt in that department always came from within), I’ve always felt that I had to edit or contain in other ways. It’s inspiring to know that this kind of love exists and that it can be transformative.

Ashley’s essay got me thinking about my own relationship with my body. As I’ve mentioned in the past, my recovery from anorexia had less to do with falling in love with my body than it did my falling in love with food. To this day, it’s my love of food (and veganism) that keeps me rooted in recovery. My relationship with my body is much improved, but it’s still complicated, and it doesn’t feel redemptive from a recovery standpoint.

I’ve learned, though, that ambivalence and complexity don’t have to get in the way of my experiencing a pretty healthy relationship with my body. For a long time, I thought that such a relationship would have to involve loving the way my body looked. I figured I’d wake up one day, and finally—finally!—like what I saw in the mirror. At long last, I’d feel sort of OK in a bathing suit. I wouldn’t grimace or squirm when I saw a photograph of myself; heck, maybe I’d even want to start taking selfies.

None of this has happened. What has happened is that I no longer feel as though I need to take overt pleasure in the way I look in order to have positive body image. Rather, I just don’t spend a lot of time worrying or thinking about my appearance. I don’t, or rarely do I, scrutinize myself, examine myself, or think about how my shape or size measures up to anyone else’s. I’ve stopped wanting to like what I see in mirrors and photos.

Instead, I focus on how my body feels. I cherish every signal of vitality and strength, because I’ve had health challenges in my life that make me appreciate the ways in which my body is physically resilient. I take pleasure in breathing deeply, in experiencing the profound impact that such breath has on my nervous system, not to mention my sense of being alive. I give thanks for my senses, for the capacity to smell, hear, and especially to taste.

So, when Ashley quoted Kelly as saying, “It’s not a body’s job to be perfect. It’s to keep you alive. I love your body for keeping my favorite person alive. Please, don’t hide it from me,” I found myself smiling in joyous recognition. This is a realization I know well: the understanding that our bodies aren’t charged with looking a certain way. They are the vessels that allow us to experience life, in all of its wonder.

Of course, there’s balance to be had in this business of body neutrality. For a while, I almost consciously avoided looking at myself; I dressed in baggy clothing and dodged any situation in which much of my shape would be revealed, to me or to others. Doing yoga in a sports bra, funnily enough, was a major turning point. It made me realize that, while I don’t have to love looking at myself, I don’t have to avoid it, either.

There’s a difference between being generally unconcerned with one’s appearance versus hiding from it; the latter implies that there’s something shameful about the body, something that cannot or shouldn’t be seen, and I truly don’t feel this way, not anymore. I simply feel that body-acceptance as I’ve experienced it resides not in aesthetic appreciation, but in appreciation of how I feel and a deep sense of gratitude to my body for keeping me alive. It’s liberating, all things considered, and perhaps one day love will peel back yet another layer.

I hope some of you will be moved by Ashley’s essay, or find that it helps to plant a new seed of self-love. And I hope you’ll enjoy these week’s other reads, which include reporting on robot chefs (yup, it’s a thing) and a look inside the so-called dark sky movement. But first, the food. 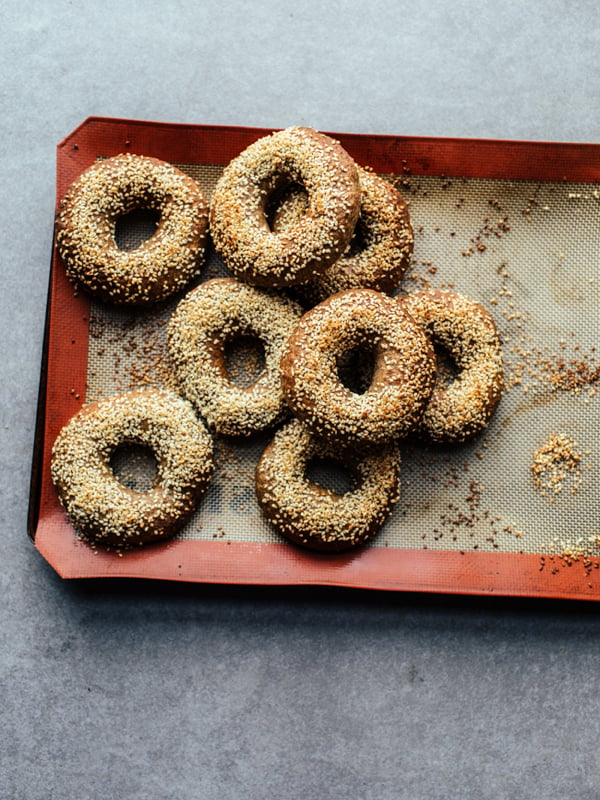 First up, Izzy’s beautiful sourdough wholemeal bagels. I should probably figure out homemade bread first, but a girl can dream. 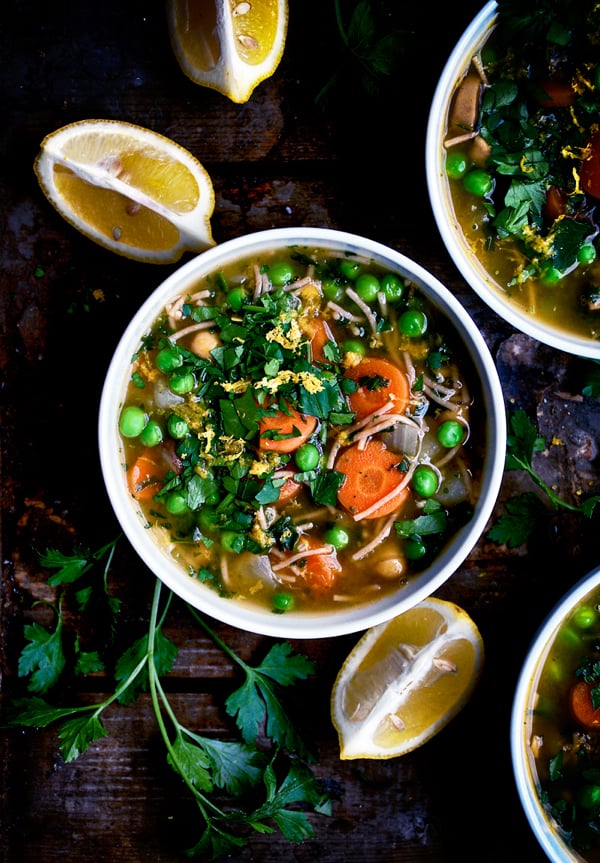 Alexandra’s chickpea noodle soup with parsley and lemon looks so comforting and homey and easy: exactly the kind of recipe I need these days. 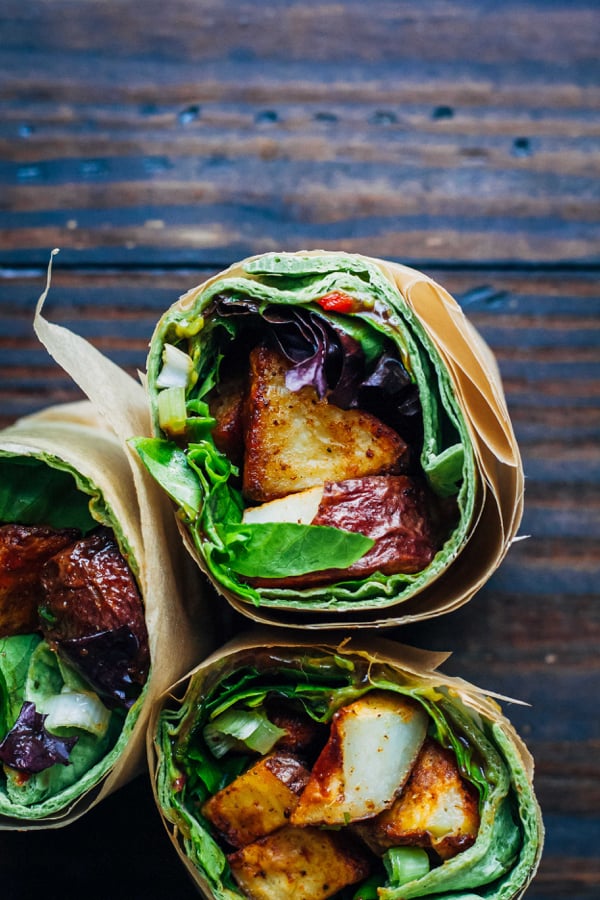 This is Sarah’s favorite wrap. I love the fact that it features potatoes! I usually stuff my wraps with hummus and tofu/tempeh, but this gives me a new set of ideas (and I make a point of never turning down crispy, fresh-from-the-oven, spice-roasted potatoes). 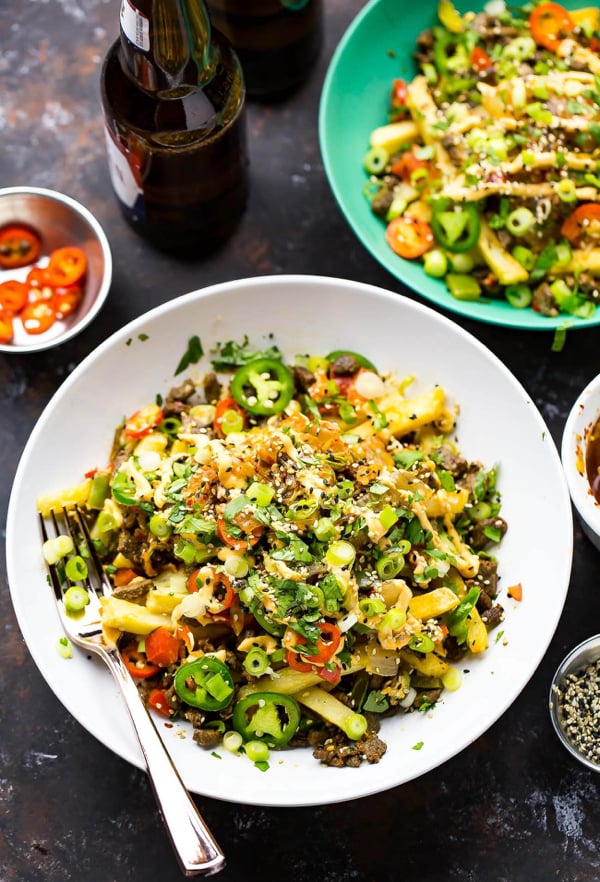 Ever since I made my smashed kimchi chickpea salad, I’ve had the urge to put kimchi in anything/everything. I love the idea of loaded kimchi fries, and thanks to Taylor, I’ll be making them soon. 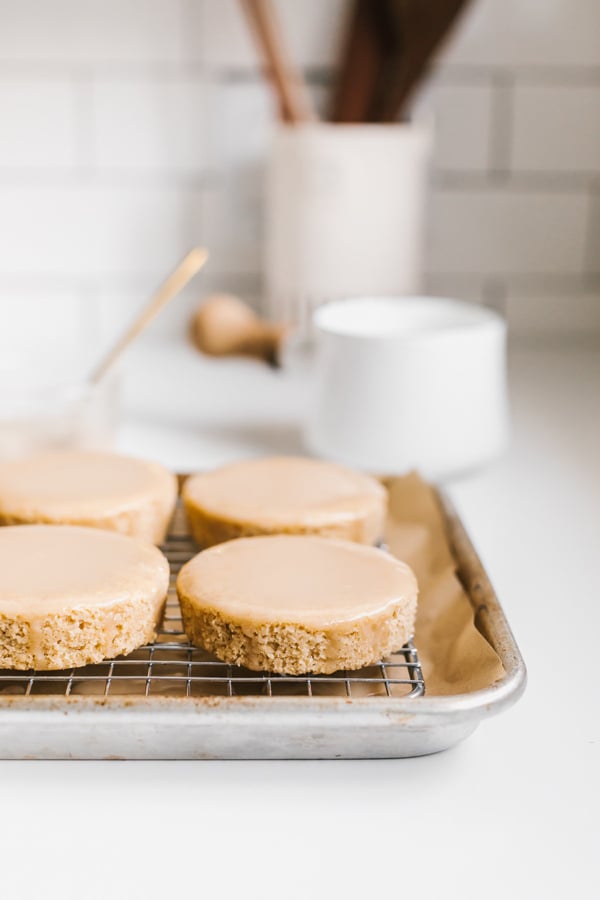 1. David Marchese reports on what it’s like to be cooked for by a robot chef. Moley is advertised as being a part of the “world’s first robotic kitchen.” Moley, who takes the form of two robotic arms that can be suspended from a countertop or another surface, is programmed with motion picture captures of a trained cook preparing a certain dish; the robot is then able to mimic the same motions. Right now, Moley only prepares crab bisque, and Marchese is one of his first diners.

The article brings up some interesting questions about the potential appeal, and also the inherent limitations, of robotic cooking. Marchese’s closing anecdote sums it all up nicely.

2. A really interesting glimpse into the lives of people who have been diagnosed with highly superior autobiographical memory, or HSAM. There are about sixty or so known cases of the condition, which confers the ability to summon up abundant and detailed memories instantly. On first inspection this might sound like a blessing of sorts, but as the article makes clear, it can also be a burden, especially since the memories are frequently triggered involuntarily.

3. A peek at what’s known as the “dark sky movement”—a coordinated effort to look into potentially harmful consequences of the abundance of artificial light in our contemporary world. Not something I’d ever given much thought to, but if noise pollution is a real phenomenon, then of course it stands to reason that “light pollution” might be, too.

4. Marisa Meltzer’s recent piece on “body neutrality” brings up a lot of the same issues and questions I touched on at the start of this post—namely, whether or not it might be freeing to take a more neutral (i.e., less insistently positive) posture when it comes to feelings of body acceptance and self-image.

5. And finally, Ashley Ford’s awesome post on self-acceptance through loving and being loved.

Wishing you all a happy, peaceful Sunday. I’ve got a new favorite dressing and salad to share with you this week!

Happy Sunday, friends. A lot of you have already tried this past week’s curried tahini pasta salad and given it a thumbs up, which makes me so happy to hear! I’m already excited to make it again. I’ve spent the last two days catching up on all of the stuff I didn’t take care of while I was wrapping up my spring semester: unanswered emails, chores, errands, cleaning, that sort of thing. There won’t be much of a breather this year, as my…

Happy Sunday! It’s been a busy, hot week here in New York. I had a full weekend of recipe testing planned, but the plans changed on Friday when I had a little kitchen accident and ended up with a bunch of stitches in my right thumb (note to self: take better care with the mandolin slicer). Fortunately, it’s healing nicely, and I’ve managed to get a little cooking done in spite of things. I’m having a lot of fun testing recipes for the…