This vegan avgolemono soup is a plant-based version of traditional Greek Easter soup. It’s made with lots of lemon, rice or orzo, and dill. It’s bright and hearty, and it tastes even better after a day or two in the fridge!

I grew up with two Easters.

The first was Episcopalian Easter, which I celebrated with many other friends. There were Easter egg hunts and chocolate cream eggs, glazed hams and scalloped potatoes.

A week or two later came Greek Easter. My mother’s family is Greek, and this is the Easter that populates my childhood memories.

On this day I was allowed to try to stay up till midnight. There were bright red eggs that we cracked in a hilarious, tableside game. There was roast lamb, tsoureki bread to snack on during the long stretch till midnight, and, best of all, there was avgolemono soup.

A frequent fear among new vegans is that veganism will disrupt family holidays. There’s good news, which is that cherished childhood dishes can be prepared with vegan ingredients.

In fact, veganizing traditional favorites has never been easier. The abundance of wonderful plant-based products on the market these days makes this achievable.

However, it’s also possible to create vegan versions of family holiday recipes without any fancy products. I created my vegan avgolemono, which is now a yearly tradition in my home, long before the advent of oat milk, Impossible Burger, or Just Egg.

It was wonderful back then, and it’s still wonderful today.

What is avgolemono soup?

Avgolemono soup is a traditional, Greek soup that’s made with egg yolk, lemon juice, and broth. As the soup is heated, the egg yolk will help to thicken it.

Many other ingredients can be added to avgolemono. Recipes vary from family to family. Rice or orzo are common additions. My yaya used tapioca, rather than rice or orzo, to thicken the soup and make it more substantial. She also added some cooked lamb, which is common. I’ve seen other recipes that call for chicken.

Our avgolemono was always very heavy on dill, which is an herb that I love. My vegan avgolemono follows suit.

How to make vegan avgolemono soup

The trick to making an authentic, vegan avgolemono is to replace the traditional egg.

There are a number of ways that you could approach this. One would be to thicken the soup with flour or tapioca starch (which would be reminiscent of the tapioca pearls that yaya used in her soup).

Rice and orzo both help to thicken and enrich avgolemono. I make my vegan avgolemono with both, though over time, rice has become my preference.

As I experimented with various approaches to making vegan avgolemono, I landed on a combination of ingredients that really worked. The trick, I found, was to use nutritional yeast and tahini.

Nutritional yeast, especially in its powdered form, creates some of the same thickness that flour would. However, it also adds umami, which helps to preserve the umami I remember from a soup that included small amounts of meat.

Tahini, meanwhile, replaces some of the richness and the fat that egg yolk would traditionally provide.

Finally miso helps to increase the umami in this soup even further. It also contributes salt, which is a key part of the avgolemono soup’s flavor. It’s important for this soup to have lots of saltiness in order to balance the sourness of all that lemon.

All of these ingredients—nutritional yeast, tahini, and miso—are added to a warm slurry, which is then transferred to the vegan avgolemono soup.

A slurry, by the way, is a semi-liquid mixture, usually containing liquid and some sort of starch, that can be mixed into soups or stews for thickening.

Slurries are useful for adding flour, starch, nutritional yeast, or any other dry ingredients that might clump up or fail to disperse evenly in soups. Whisking them with a small amount of hot liquid first ensures that they can be mixed in thoroughly and smoothly.

You won’t need a lot of ingredients in order to make the vegan avgolemono. However, a few of the ingredients are especially hard-working, and it’s worth taking note of them.

I nearly always use vegetable broth when I make soup. However, this recipe really benefits from the use of a vegan chicken-style broth instead.

Chicken is often added to avgolemono, and so far as I know, the soup is nearly always prepared with chicken stock. This was true in my home, at least.

It isn’t too hard to find vegan chicken-style broth in grocery stores now, including mainstream and online grocers. Alternatively, you could use a vegan, chicken-style bouillon. This one is my favorite.

The type of vegan chicken-style broth that you use will determine how much salt you need to add to the soup.

I call for 1/4 teaspoon fine sea salt. This, combined with regular, vegan chicken-style broth and white miso, is the right amount of saltiness for me—perfectly in balance with the soup’s tangy, sour notes.

However, preference for salt is personal. You can adjust this amount based on the type of broth (regular or low-sodium) you use, as well as your tastes and needs.

You can also start with 1/4 teaspoon and add additional salt at the end. I’ve been known to do just that!

White miso adds saltiness and umami, along with slight creaminess, to the vegan avgolemono. I think it’s an important ingredient. However, if you don’t have it on hand, you can omit it and use a little extra salt instead.

What about brown or red miso? I find that both are too strongly flavored to work well in this bright, lemony mixture. I don’t recommend substituting either. However, I’ve tried the soup with chickpea miso, and that did work well.

I prefer to use long-grain white rice in this soup, and it’s a more authentic choice for avgolemono. However, I’ve made the soup with long-grain brown rice many times, too. Brown rice creates a soup that’s a little earthier and nuttier than one made with white rice or orzo.

Note that if you use white rice or orzo, the soup will be quicker cooking than soup made with brown rice. The recipe card lists cooking times for both.

Until I wrote cookbooks—and availed myself of the help and guidance of skilled, detail-oriented recipe testers—I didn’t realize that there are meaningful differences between nutritional yeast flakes and powder.

I did know that nutritional yeast comes in two forms. Nutritional yeast flakes are just what they sound like: bigger, uneven flecks that are good for sprinkling, like a cheesy topping. I use them in my favorite cashew parmesan cheese.

Nutritional yeast powder, on the other hand, is very fine. Depending on the brand, it can be even finer in texture than flour. It’s great for whisking into liquids. I use it in the maple mustard dressing from Power Plates.

It’s the powder that works best in this recipe. Because you make a slurry, which is added to the hot soup, it’s good to use a nutritional yeast that will dissolve easily into liquid.

However, if you only have nutritional yeast flakes at home, don’t worry! They work well enough in the recipe. Just be sure to whisk your slurry well before adding it to the pot.

If I’ve learned anything about dill, it’s that there are as many people who hate it as much as I love it.

I grew up with avgolemono that was full of dill, and the flavor of this spring herb has become a big part of what I love about the soup.

However, I would never think to force it on true dill haters! If you hate dill, you can try using chopped parsley leaves in the vegan avgolemono instead.

One of the best things about vegan avgolemono is that it tastes even better after a day or two of sitting in the fridge. Storage time helps to both deepen and mellow out the sourness of all the lemon in the soup. It also helps the dill flavor to settle in.

You can prepare the soup a couple days before any Greek Easter gathering—or simply in advance of when you’ll need it.

The vegan avgolemono soup can be stored in an airtight container in the fridge for up to 5 days.

Can I freeze avgolemono soup?

Absolutely. If you’d like to get an even longer head start on your meal prep, you can make your avgolemono and then freeze it. The soup can be frozen for up to 6 weeks.

Thaw the avgolemono in the fridge overnight before enjoying.

Recipes like this one, which evoke the Greek food that I grew up with, are very near and dear to my heart. Here are a few others, good for holidays and every day alike, that I really love. 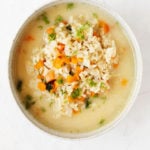 And there it is: an authentic, vegan avgolemono that’s tangy, creamy, and filling—just like the warm mixture that I remember from childhood. It makes me so happy to carry on a family recipe tradition in my own way.

I hope you’ll give the recipe a try. You certainly don’t have to be Greek in order to enjoy it!