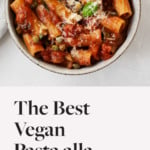 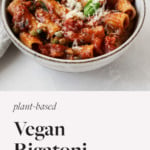 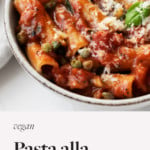 This vegan Pasta alla Norma is so saucy and satisfying! Made with eggplant, basil, capers, and cashew cheese, it’s a plant-based spin on the classic Sicilian recipe.

Spontaneous cooking isn’t really my strong suit. I make better food when I have a plan, a recipe, an agenda.

Even so, there are a few types of meals that encourage me to be intuitive. Pasta is one of them. If there’s any type of weeknight supper that I’m able and willing to throw together at the last minute, it’s a pasta supper. And this vegan rigatoni alla Norma is a new favorite.

A couple weeks ago, I got a little dazed by the arrival of eggplant season at the farmers market. I picked up eight (!) eggplants in my flurry of excitement.

Needless to say, I got home and realized that I had more eggplant than I knew what to do with. Bulgur stuffed eggplants was my first stop.

And I knew that some sort of pasta dish would follow.

What is Pasta alla Norma?

Pasta alla Norma is a Sicilian dish made with eggplant, tomatoes, basil, and, traditionally, grated ricotta salata. Some recipes call for capers, and since I love briney flavors, I added them to this meal.

Pasta alla Norma isn’t hard to veganize. With a little cashew cheese or store-bought vegan feta, the recipe is practically vegan. For this vegan Pasta alla Norma, I used my go-to cashew cheese. I froze it and then grated it, which gives a similar effect to ricotta salata.

The other major departure I made from some traditional Pasta alla Norma recipes was that I didn’t deep fry my eggplant. The eggplant in Pasta alla Norma is supposed to be crispy, and it’s often pan-fried. I lightly sautéed mine instead, and I thought it worked perfectly.

I’ve been learning a lot about spontaneous pasta cookery from Colu Henry’s Back Pocket Pasta. In her eggplant alla Norma recipe, she recommends not salting the eggplant before cooking. According to Colu, the eggplant will become crispier without pre-salting.

Salting eggplant before cooking is the subject of some controversy. Personally, I always salt it. I think that salting does decrease the bitterness of eggplant, especially if the eggplant isn’t in season.

I also like salting eggplant for texture. My experience has been that salting tenderizes the eggplant. I tested this recipe with both salted and unsalted eggplant, and I preferred the salted version. The eggplant stays tender and sweet while browning at the edges.

With that said, you can skip salting if you’re in a rush to eat and don’t have time. Salting is a worthwhile step if you’ve got some wiggle room in your schedule.

I’ve seen Pasta alla Norma recipes that call for ziti, penne, gemelli, and even spaghetti. Most often, though, the recipe is prepared with rigatoni.

Since I love rigatoni pasta (all lengths and widths!) that’s my choice for this vegan Pasta alla Norma.

If you don’t have rigatoni on hand, no problem. Another medium pasta shape, especially a tubular shape, will work well.

I used a globe eggplant for this recipe, but mini eggplants and Japanese eggplant would also work nicely.

The sauce for the vegan Pasta alla Norma is part eggplant, part juicy plum tomatoes. My tomatoes are courtesy of the folks at Pomi.

Pomi has been bringing fresh, high quality tomatoes from Parma to the US for over 30 years. The tomatoes are packed in BPA-free cartons, and they come in strained and chopped varieties. The tomatoes are also non-GMO, and the company has an organic line as well.

Shelf-stable tomatoes are a pantry staple for me. I use them in soups, pastas, chilis, homemade sauces, and so much more. These tomatoes are some of the freshest and sweetest I’ve tried. They’re also low in sodium, which I love. It means that I can control seasoning myself.

Totally optional! I love capers, and I think that they add to the complexity of this recipe. But if you don’t have capers, or you’d prefer to leave them out, that’s OK.

Not optional. At least not in my opinion 🙂 Fresh basil adds so much wonderful, herbacious flavor to the vegan Pasta alla Norma sauce.

Fresh is best, so if it’s not summertime where you are, it’s worth learning whether a greenhouse basil grower is in your area. I love Bowery Farms, which is local to me in New York City,

Cashew cheese is a great option for topping this recipe. You can freeze it in a block and grate it, as I did. Alternatively, you can just dollop it onto your pasta.

If you don’t have cashew cheese on hand, you can use store-bought vegan feta. You can also simply garnish the vegan Pasta alla Norma with a few tablespoons of cashew parmesan.

The vegan Pasta alla Norma will come together in about twenty or twenty-five minutes. You’ll sauté your eggplant and prepare the sauce while your pasta boils, and that multitasking helps to speed things along.

If you do salt your eggplant, you’ll need an extra fifteen or twenty minutes of salting time before you start to prepare the rest of the recipe.

Once made, the leftovers of this pasta keep well. In fact, I think that the sauce is a little more intense and flavorful once it sits in the fridge for a day or two. The leftovers can be stored in an airtight container in the refrigerator for up to four days. You can also freeze them for up to six weeks.

A quick note for fellow fans of batch cooking: you can make the sauce for this recipe without actually adding it to pasta! And that sauce doubles really well. It, too, can be frozen.

Whenever you’re ready for the rigatoni alla Norma, you can boil your pasta and fold it together with the pre-made sauce. 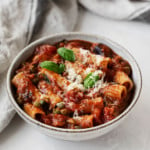 There’s nothing like pasta, right? I hope you enjoy this one. I’ll check in later this week with another easy meal.

This post is sponsored by Pomi. All opinions are my own, and I love the quality and freshness of these tomatoes. Thanks for your support!