This vegan salisbury steak with mushroom gravy is made with nutritious, satisfying tempeh. It’s an entirely homemade, plant-based version of the classic American comfort food dish. This is a hearty and cozy meal that’s perfect for winter and also a great option for the holidays.

I have a soft spot for American comfort food classics. Specifically the types of recipes that have, and could, end up as TV dinners.

The reason for this may be that I ate a lot of TV dinners growing up.

I came from a family of Greek immigrants who cooked, but also delighted in the convenience of ready-to-eat food in American supermarkets.

My grandmother and mother both liked microwave dinners, and I followed in their footsteps. Turkey tettrazini, chicken à la king, Swedish meatballs, meatloaf with gravy, mac n’ cheese, pot pie—I loved every single one of these.

I was inspired to make this recipe when I saw Eric Kim’s recipe in the New York Times. “Salisbury steak deserves another chance,” the headline read.

I thought back to tasting and loving the frozen version as a kid. I remembered liking it because the beef was a patty, not an actual steak, which I preferred. My mom would serve it with a baked potato, and of course, there was that savory gravy (Worcestershire sauce!).

Kim’s article seemed like a pretty great reason to try a vegan version of Salisbury steak. So I did.

What is Salisbury steak?

Salisbury steak is a “steak” made from lean, ground beef. In the original recipe, it’s broiled, then seasoned to taste with butter, pepper, salt. Worcestershire sauce, mustard, horseradish, and lemon juice are option.

That recipe was developed by Dr. James H. Salisbury. Salisbury, who was born in 1823 and died in 1905, served as a physician during the Civil War.

Today, he’s known for his eponymous “steak” recipe. Salisbury was also one of the first physicians who argued that a specific diet was integral to overall health and well-being.

The diet he believed in consisted mainly of meat, with vegetables, fruits, starches and fats limited to a third of the diet. (The irony of sharing one of his recipes on this plant-based blog is fun.)

Apparently, Salisbury recommended that his steak recipe be eaten three times daily, with hot water to flush the digestive system.

Salisbury steak is similar to the traditional recipe for Hamburg steak, which is the recipe that the hamburger evolved from.

Salisbury steak caught some interest and became popular after World War I. Anti-German sentiment was strong at that time, and “Salisbury steak” described the ground beef dish without reference to a German city.

The recipe became a comfort food classic through TV dinners, which rose to popularity in the 1950s and 60s.

How to make vegan salisbury steak

When I chatted with Eric Kim about his recipe, he said that for him, its essence lay in the “umami-rich” onion mushroom gravy. This part of the recipe is easy to make vegan.

As for the steaks themselves, I turned to what is probably my favorite plant protein: tempeh.

Tempeh is probably my go-to when I really want to achieve the effect of “meatiness” in my recipes.

It also shows up in a lot of other, simple recipes: lemon pepper baked tempeh, balsamic mustard baked tempeh, and tempeh lunch salad.

The tempeh meatballs, in particular, are a fan favorite recipe from this site. And it’s a consensus that I agree with.

The meatballs are easy to make, deeply savory, and I think they’re as flavorful as store-bought vegan meatballs. (I’m a big fan of vegan meats, so in my book this is a compliment.)

I used the same ingredient base as I use for those meatballs—tempeh and walnuts—to make my Salisbury steaks. I adjusted the seasoning here, inspired by Kim’s recipe.

And of course, they have a different shape than the meatballs. They’re patties, rather than little globes.

I’m so happy with how they turned out. Here are the steps you’ll go through to prepare the entire recipe, steaks included.

Speaking of tempeh, I recently posted a recipe for tempeh nuggets. In that post, I mentioned that simmering tempeh in broth before cooking takes care of two purposes.

First, it helps to remove some of tempeh’s natural bitterness. This is the reason why many tempeh recipes call for steaming tempeh prior to cooking in other ways.

Second, it seasons the tempeh somewhat. More seasoning gets added when the tempeh is turned into patties.

For this recipe, you’ll crumble the tempeh before simmering it.

Step 2: process and season the tempeh

At this step, you’ll process the tempeh with walnuts and a number of seasonings, until it’s a mixture that you can shape into patties.

The patties need to bake in the oven for about 20 minutes, or until golden brown and crisping up on each side.

I’m a fan of steaming potatoes for mashing—I think it gives them better flavor than boiling, which can water-log the potatoes.

For this recipe, I make simple mashed potatoes with steaming russet potatoes as the first part of the process.

A very rich, savory mushroom and onion gravy is the component that brings these vegan Salisbury steaks to life!

This may become my new favorite gravy recipe to make at home. The Worcestershire sauce and a hint of Dijon mustard give it a really fun intensity of flavor.

And there’s a touch of cream added to most Salisbury steak gravy recipes, so I follow suit. I use my go-to cashew cream, which works perfectly.

If you need a substitute, you can try the same amount of an unsweetened, store-bought vegan creamer.

At this point, the only remaining step is to plate the tempeh steaks with the potatoes and smother everything in gravy.

But the recipe would be wonderful with so many other vegetable side dishes:

…and the list goes on and on. Essentially any simple preparation of a seasonal vegetable that you love could be a nice pairing with the Salisbury steak.

I’ve been writing a lot about my meal prep routine and some of my favorite vegan meal prep dinners.

I’m happy to tell you that the vegan Salisbury steak would be a good contender.

All of the components here will keep for up to 5 days in airtight containers in the fridge. And everything can be frozen for up to 8 weeks.

If you want to freeze it all, or freeze leftovers, I recommend freezing the “steaks” separately from the potatoes and gravy. This way, they won’t become soggy as you defrost.

Are the vegan salisbury steaks gluten-free?

However, the Worcestershire sauce can be replaced with tamari or coconut aminos if you’d like to make the recipe gluten-free.

In addition, be sure to also use a certified, gluten-free vegetable broth in the recipe. 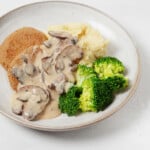 For the mashed potatoes

For the mushroom gravy

I had some of the steak, potatoes, and gravy in my freezer this past week. And I’m happy to tell you that it was one of the cozy recipes that helped me to feel better and take care of myself.

I hope that this comfort food will truly be comforting for you, too, at a moment when you need that from your meals.