Greetings, friends. I hope you’ve been enjoying some weekend rest. If you didn’t catch yesterday’s post, then you’re in for a sweet treat — literally! I’m giving away a copy of Denise Mari‘s wonderful cookbook, Organic Avenue, and I’m also sharing Denise’s recipe for snazzy snickerdoodle macaroons–vegan, raw, and gluten free. They’re fantastic, and you should check the giveaway out.

And you should also check out the following inspiring recipes. I’m all about hearty bowls this week. 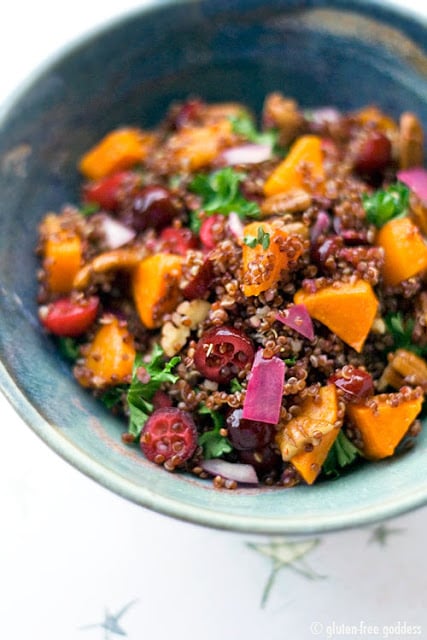 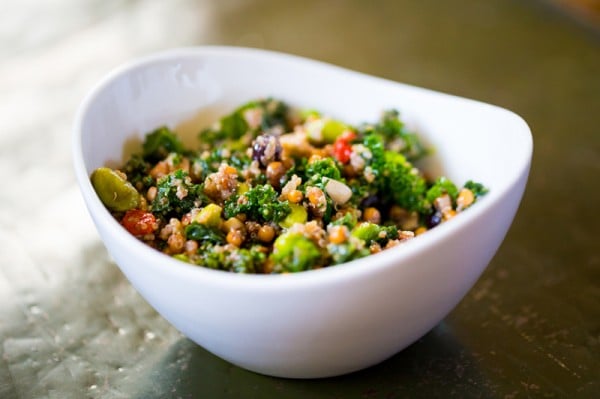 Next up, a raw food power bowl if ever I saw one! Raw vegan protein bowl from Beyond Nourished, featured on Young and Raw. 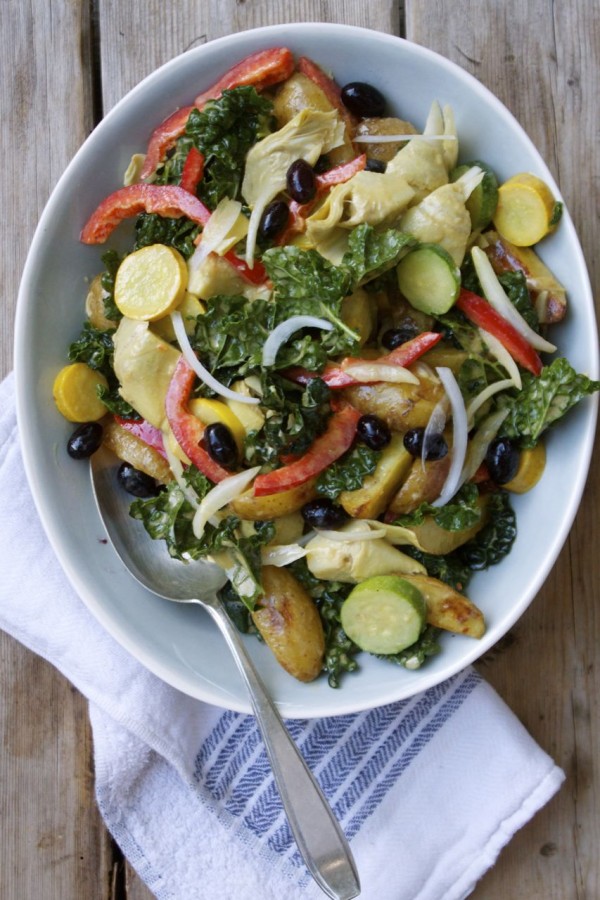 The “glory bowl” dressing in this recipe–nooch, apple cider vinegar, tamari, and more–is enough to set my mouth watering. But Shira adds to that a bounty of farmer’s market produce. The resulting salad is gorgeous. 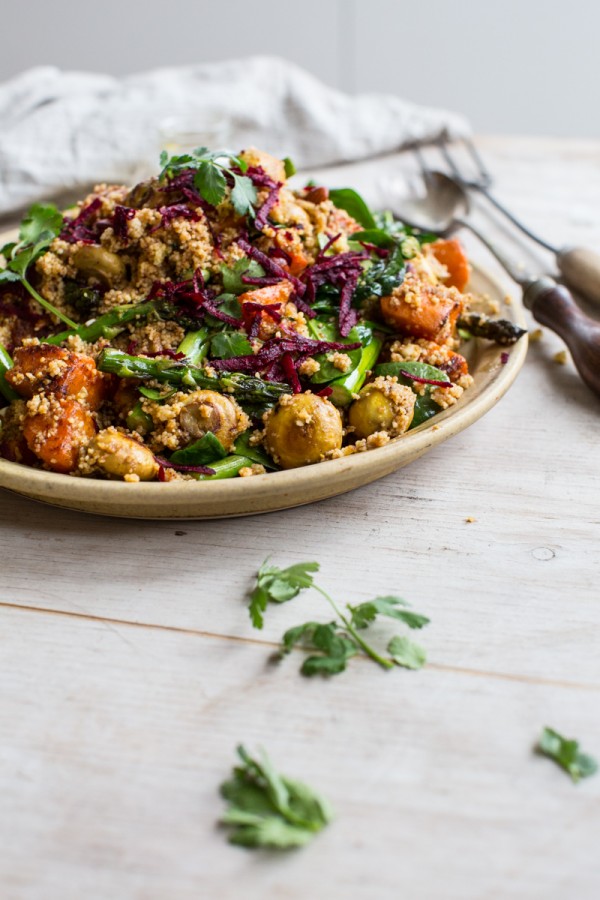 This week, I shared a turmeric slaw that’s incredibly tasty–and full of anti-inflammatory power. If you’re into turmeric, check out this amazing turmeric mushroom salad with beets and sweet potato from Cook Republic. 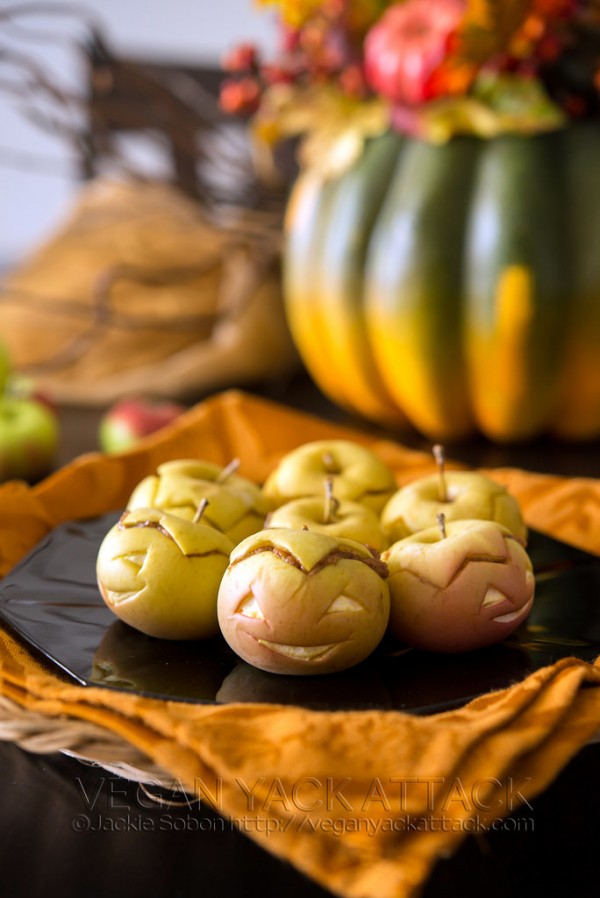 And for dessert, I don’t really think it gets more adorable than Jackie’s peanut butter apple lanterns.

1. I’m sure that many of you saw the Atlantic’s article, “The Case for Coffee.” Needless to say, I’m pleased when any new study seems to support coffee consumption, or clears its reputation as a healthy living no-no. And there have been many such studies in recent years: one linking coffee consumption to increased muscle strength, another to reduced risk of basal cell carcinoma, yet another to reduced liver inflammation, reduced risk of liver disease, and reduced activity of liver cirrhosis. Finally, a number of recent studies have implied that coffee consumption may reduce the risk of Parkinson’s Disease.

And now, the latest: a study suggesting that coffee is associated with a reduced risk of Type 2 Diabetes in women and men (though the effect is more pronounced in women). The Atlantic  covers the new findings and summarizes recent research in its provocatively titled article, which no less than 4 people emailed to me within a day of its publication. I wonder if people know I like coffee…

There are, of course, reasons to avoid excess coffee. It can make people jittery, more anxious; if you have GERD or certain other gastric complaints, it can exacerbate them. If you have IBS or other digestive ailments, coffee can contribute to cramping or irregularity. We know our own bodies best, and if coffee doesn’t seem to work for you, then I don’t think that these new findings are cause for picking up the habit. But they certainly strengthen the case that research has been building for a while now, which is that coffee does not deserve its reputation as a vice. Research is also suggesting that there are beneficial compounds in coffee that have nothing to do with its caffeine content (decaf coffee had nearly as high a protective correlation against Type II diabetes as regular).

In short, if you love the stuff, drink up.

2. Love this article from The Guardian about meat substitutes. At least once a month, a foodie friend or acquaintance will ask me, “how do you feel about meat substitutes?” Sometimes the question is laced with a hint of disdain, perhaps stemming for the current craze for “clean food” and abhorrence for anything “processed” (a set of categorizations that I have mixed feelings about to say the least).

I think meat substitutes are fantastic. As someone who enjoys the challenge of whipping up, say, a lentil and sweet potato loaf, or raw “taco meat,” I’m usually quicker to create a meat substitute of my own than to purchase one. But in these busy days, my boyfriend and I usually have either Beyond Meat or Field Roast in our fridge; you may recently have spotted the orecchiette with Field Roast that I posted on Instagram! I address meat substitutes in my book, too, pointing out that:

a) The point of meat substitutes isn’t really to serve as health food, so criticisms of their putative healthfulness feel a little misplaced; the point is to spare animal lives and to lessen environmental impact, not bestow longevity or glow

b) That said, meat substitutes have evolved with the times, and many of them now do boast healthful ingredient lists, which means that they’re both a wonderful vehicle for dietary change, and a source of solid nutrition.

The author of the Guardian article is similarly enthusiastic, and she cites a lot of data about how meat substitutes can help the environment and animals. She also notes that these products are not only for vegans these days:

“Vegetarian since the age of 15 and vegan for about half that time, in the past I felt if you’d already made the choice to ditch meat, you might as well ditch food products that resembled meat too. Why turn vegetarian only to purchase foods that require more processing, packaging and in some cases, more transportation than the likes of nuts, grains, pulses and eggs.

I’d missed the point. Meat substitute companies aren’t just aiming their products at vegetarians and vegans – who make up less than 3% (pdf) of the UK population – but also at meat consumers, a much bigger potential market.

It appears they are succeeding. In a study carried out by global market research company Mintel, of the 36% of Americans purchasing meat alternatives only 7% identified as vegetarians.”

I think this is great, more evidence that more folks who aren’t necessarily vegan or vegetarian are nevertheless willing to explore plant-based food.

And to the author’s point about missing the point, I’d also add that of course meat substitutes do require more processing and packaging and transportation than good ‘ole beans and grains. Part of the reason that this isn’t the point is that they serve a vital purpose in helping to create familiarity in vegan cuisine, whether for new vegans, dabblers, or veterans. And this is great news for foodies who retain their attachment to old favorites. Sometimes a few strips of Beyond Meat do what beans can’t, and a mouthful of melty Daiya succeeds where cashew cheese fails. I say three cheers for all of these brands and the work they do!

3. Another Atlantic article, this one on telemedicine (services like HealthTap, where doctors answer questions online for free). Interesting stuff; I can see how this might be both helpful and also tricky, because only so much can be diagnosed online. Still, a cool idea as a resource.

4. A lovely article, conveyed through a series of interviews with food writers and chefs, about recipe development. If you’re as interested in language, writing, and communication as you are in recipes, this one’s for you. I love what Judith Jones had to say:

“…[W]hat IS a simmer, after all?” Jones wondered. “You can’t have an adjunct book that you turn to. It’s all got to be there. I think one thing that’s extremely important is language, that you use language that really conveys what you’re doing.” And for the professional chef, she wishes that they would regress to their student days, putting aside the blind instinct instilled by years of repetition and, in a sense, learning anew with a reader. What IS a simmer? “I think you have to observe very, very closely what you do, and then write it all out, and try to think of those images that we all know. They can be quite original, too. It is what makes writing lively!”

5. So, full disclosure. I’m not really a fan of calling anything “the new bacon,” and I also sometimes find it a little snooty when restauranteurs who are sharing vegan cuisine overemphasize the fact that their focus is on vegetables (as if to say “unlike all of that other vegan food that’s full of fake stuff”). But even so, it is tremendously important to present vegan food not as an array of similacrums, but rather as a vibrant cuisine with its own proteins. And on that note, I was interested to see this WaPo article about how Jose Andres (a D.C. chef known for his flair with Spanish food) will be starting up a new, veg-centric chain of fast-casual eateries. The first will be named Beefsteak — after the tomato, of course. Good stuff.

And on that note, friends, Happy Sunday.

In the last few days, New York has transitioned from hot, muggy weather to a cool, dry, and breezy climate that hints at September and October to come. Everywhere I go, people are talking about it. I think we all feel grateful for the tiny glimpse of fall, even if no one is ready for the hustle of back-to-school season. So much of life, at least here in the Northeast, revolves around the rhythms and patterns of the seasons. They organize our experiences…

Happy December, friends! It’s been a somewhat rocky entrance to the month for me, as the past week was full of personal unrest. I slipped into patterns of behavior that feel like me at my worst—stuff so old and habitual and frustrating to me that I don’t even want to write about it. Here’s the interesting news: I’ve somehow managed to regard a bunch of varied relapses—relapses in thought patterns and compulsive behaviors—with an unusually compassionate and non-judgmental gaze. This wasn’t a conscious…

I’m perched upon my sofa right now in a sea of pre-holiday mess: as-of-yet-unwrapped gifts, Scotch tape and scissors on the floor, a Christmas tree that needs watering and has been shedding needles without subsequent vacuuming from me, a countertop covered in flour for the bread that probably needs longer to proof than I have time to give it. There are unwashed dishes in the sink, work emails I meant to send before Christmas and didn’t, cards I wanted to mail to friends…